How Indonesia’s deadly tsunami was caused by volcano which grew in hole left by original 1883 eruption which was blamed for more than 36,000 death

The deadly tsunami in Indonesia was caused by the ‘child’ of ferocious volcano Krakatoa which grew following an 1883 eruption which killed 36,000.

The juvenile volcano emerged from the sea around 90 years ago and has been on a watch list for possible eruption for more than a decade.

Anak Krakatoa – the ‘Child of Krakatoa’ – has been showing signs of a huge eruption since June, often sending huge plumes of hot ash into the sky.

The once submerged mass grew into a desolate volcanic island and now stands at around 300 metres above sea level, apparently growing bigger every two to three years.

The deadly tsunami in Indonesia was caused by the ‘child’ of ferocious volcano Krakatoa which grew following an 1883 eruption which killed 36,000 (pictured)

Ray Cas, a volcanology professor from Monash University in Australia, said that the recent explosion was relatively small but may have collided with a submarine event and caused the natural disaster.

With an explosive force 13,000 times the power of the atomic bomb that annihilated Hiroshima, the 1883 eruption of Krakatoa killed more than 36,000 people and radically altered global weather and temperatures for years afterwards.Additional seismic activity

The eruption was so violent and catastrophic that no active volcano in modern times has come close to rivalling it, not even the spectacular eruption of Mount St Helens in the U.S. in 1980. 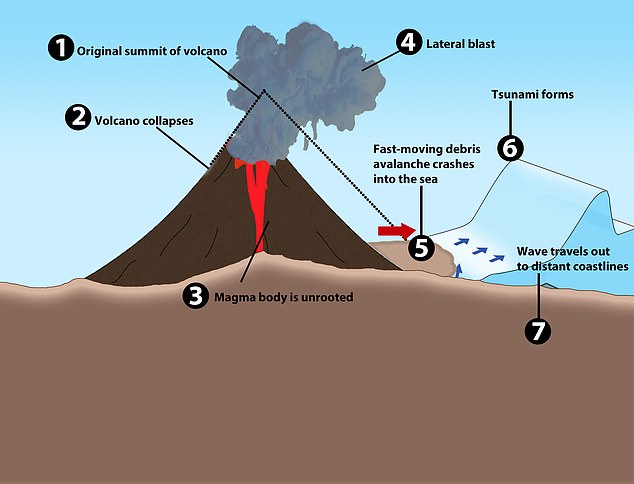 It began during the afternoon of Sunday 26 August and was at its worse point by the next morning in Indonesia, which was known as the Dutch East Indies at the time.

More than 70 per cent of the island and the surrounding isles were demolished during the explosion.

Additional seismic activity from the volcano is believed to have continued for two months. 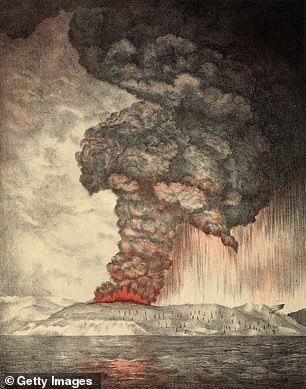 An artists impression of the 1883 Krakatoa eruption which killed 36,000

In the years leading to the eruption earthquakes were felt as far away as Australia and steam venting occurred regularly  from Perboewatan, the northernmost of the island’s three cones.

Giant eruptions of ash reached 20,000 ft in the air and the noise created by the volcano could be heard in Jakarta 99 miles away.

Official records of the time show that the 1883 eruption, together with an enormous tsunami it generated, destroyed 165 villages and towns, seriously damaged a further 132 and killed 36,417 people outright.

Krakatoa had an extraordinary effect on the planet last time round.

Average global temperatures following the eruption fell by as much as 1.2 C, as the huge quantities of sulphur dioxide pumped into the atmosphere resulted in clouds that reflected a greater amount of incoming light from the sun. 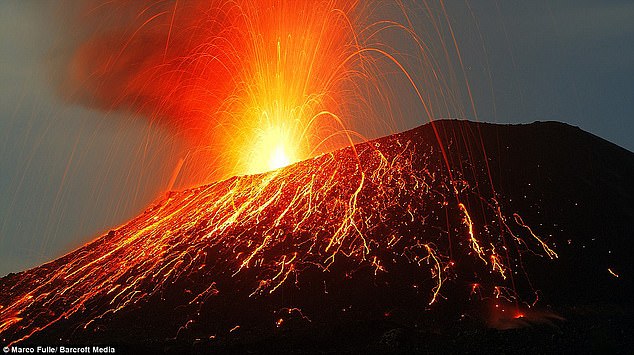 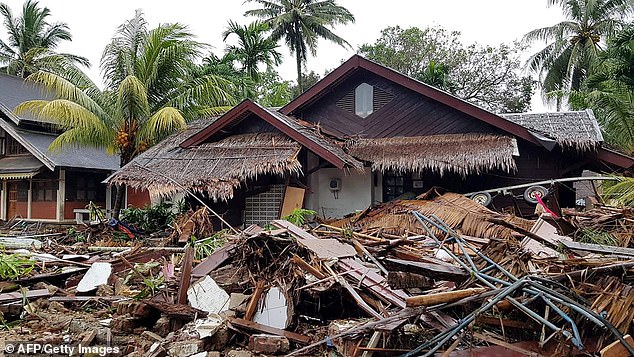 ‘It was very high, and we soon saw that it was water. Trees and houses were washed away. There was a general rush to climb up in one particular place. This caused a great block, and one after another they were washed down and carried away by the rushing waters.’

Over 90 per cent of the people killed by Krakatoa died in the tsunami. In the years after the eruption, the area around Krakatoa was quiet. However, in 1927, steam and rock was seen bubbling away in the water, and soon Anak Karakatoa – ‘Child of Krakatoa’ – began to rise above the sea.