Inexperienced couple who sank their boat, lost everything 2 days into adventure, set off in new boat

A couple whose boat containing all their belongings sank off the coast of Florida as they embarked on a life-changing adventure, have once again set sail in a new vessel.

It has been three months since Nikki Walsh, 24, and Tanner Broadwell, 26, set off on their journey and two days later their boat, the Lagniappe, struck something which caused it to capsize and sink.

The couple, along with their pet pug Remy, again sailed off on Tuesday afternoon from the St. Petersburg Municipal Marina on the Lagniappe II, which was donated to them by a retired physician.

The couple are cautiously optimistic about this voyage, and have even expanded their crew of two to a crew of five, plus another two dogs.

Nikki Walsh shared this picture aboard the new boat as she and her boyfriend. This time they have three new crew members helping 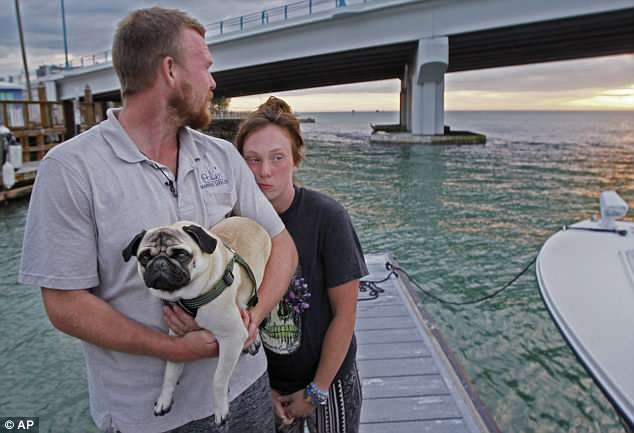 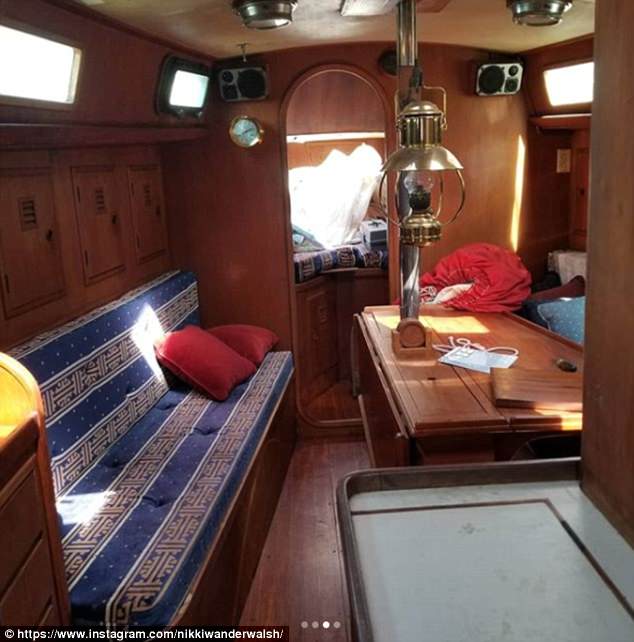 Inside the beautiful new sea home: The couple have spent the past month working on the boat and prepping it for their next attempt at life on the water 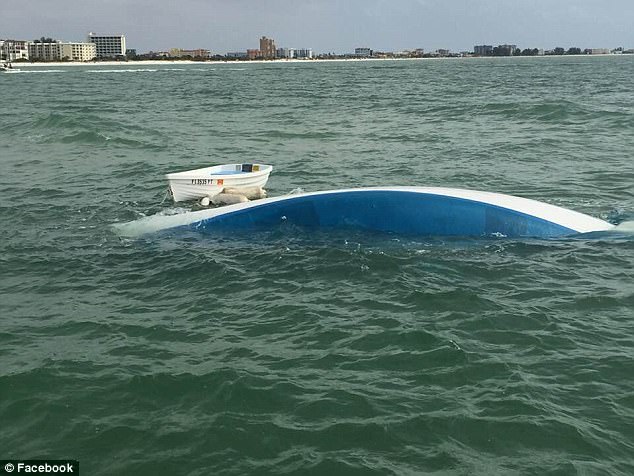 The original boat, the Lagniappe (pictured) struck something in the water so abruptly that Walsh almost flew off the deck

Broadwell’s father who is an experienced sailor, as well as his sister, and another friend are also along for their second journey.

‘We’re definitely more ready, but also more cautious because the worst that can happen has happened to us,’ she said. ‘We’ve learned our lesson not to go into unknown ports at night time.’

The couple were lucky when a retired physician saw the story of their sunken dreams and essentially donated the boat he was unable to use.

Mark Reinecke saw their plight and sold them his 1985 Cheoy Lee Pedrick 36-foot sailboat, the Odyssey, for $1.

He noted the young couple were from Colorado like he and his wife, and, that they too had a beloved pug. 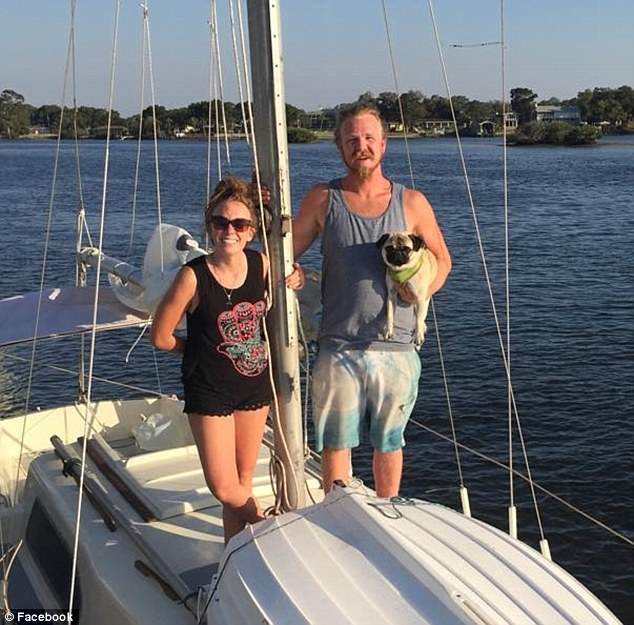 Tanner Broadwell, 26, and Nikki Walsh, 24, sold everything so they could sail away on their boat Lagniappe (pictured) but just two days into their journey the vessel snagged and sunk 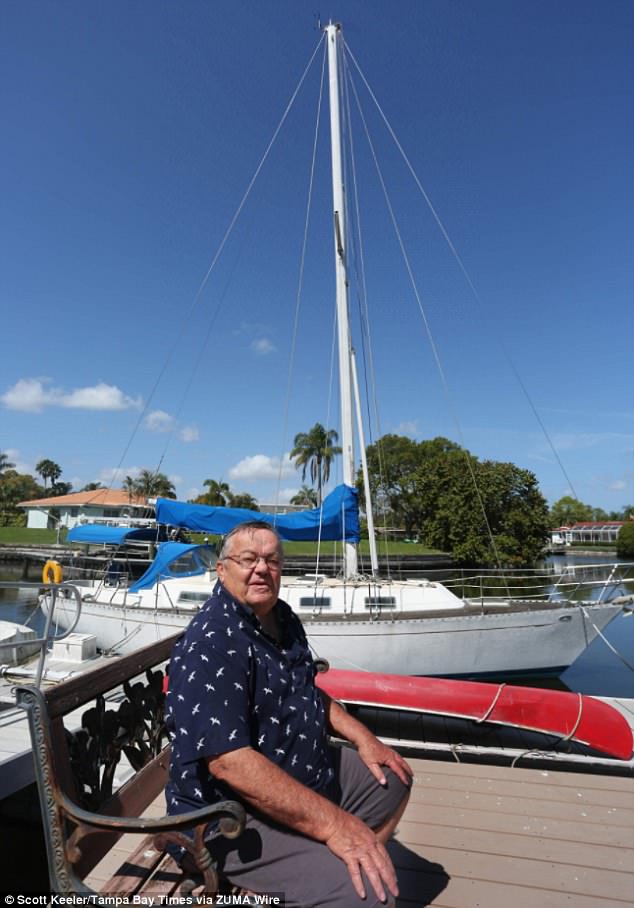 Mark Reinecke, 77, had his boat (docked behind him) sitting in his yard after decades of enjoying it. Over the years he had gotten less use out of it with age and health becoming an issue, so he sold it to the couple for all of one-dollar

At 77-years-old Reinecke said his age and declining health had prevented him from taking the boat out on trips to the Florida Keys and Bahamas like he and his family did a decade ago.

‘So I’ve had it there behind the house trying to think of something to do with it,’ Reinecke said.

‘That boat is like part of our family, but we also feel that the sailboat deserves to be at sea, not just sitting there, so when this situation came up, we said, “Let them have it”. It’s like passing it on to the next generation.’

The seasoned boatman went over all of the boat’s quirks that he himself has navigated in the 33 years of owning the Odyssey, and he talked to the couple about ‘normal concerns’ over their sailing abilities, but added ‘I can’t teach them to sail. They just have to do it.’

When the Lagniappe capsized, they were left with almost nothing but $90 to their name, their two-year-old pug, Remy, and their social security cards.

Everything else went down with the ship.

Describing how she felt after the boat sank, Walsh said: ‘I’m just standing there in awe. I just lost everything I ever owned. I see my things floating away and I can’t get to them.’

Once Sea Tow finally arrived, their ship was already immersed in close to 10 feet of water, and capsized. 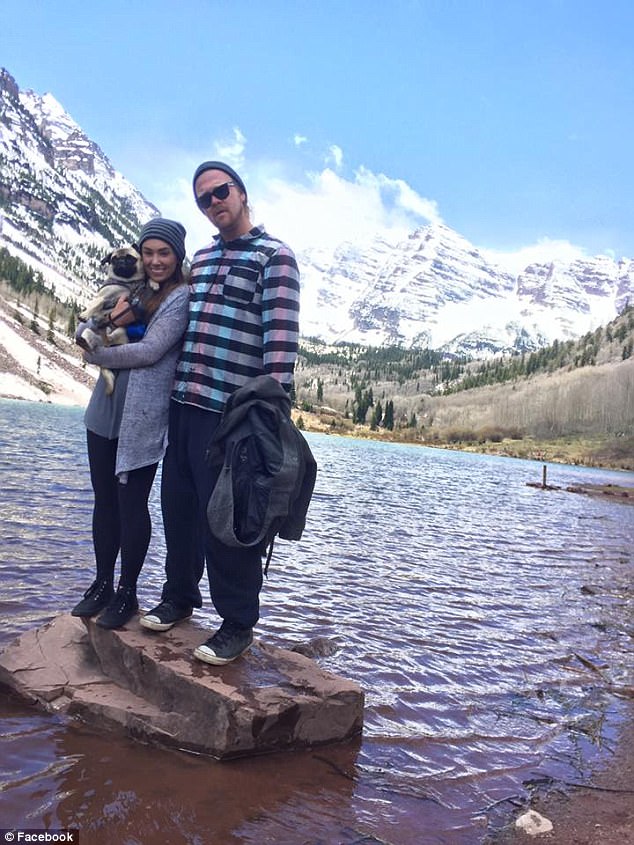 The team of two and their dog, a two-year-old pug named Remy, set sail to conquer the seven seas in February 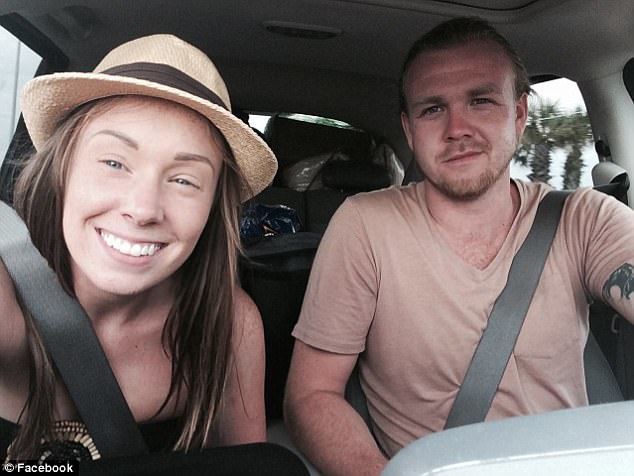 Tanner Broadwell (right), 26, and Nikki Walsh (left), 24, sold everything they owned in Colorado to buy a sailboat and live their best lives on the open sea, but that ship set sail for them when their boat sank 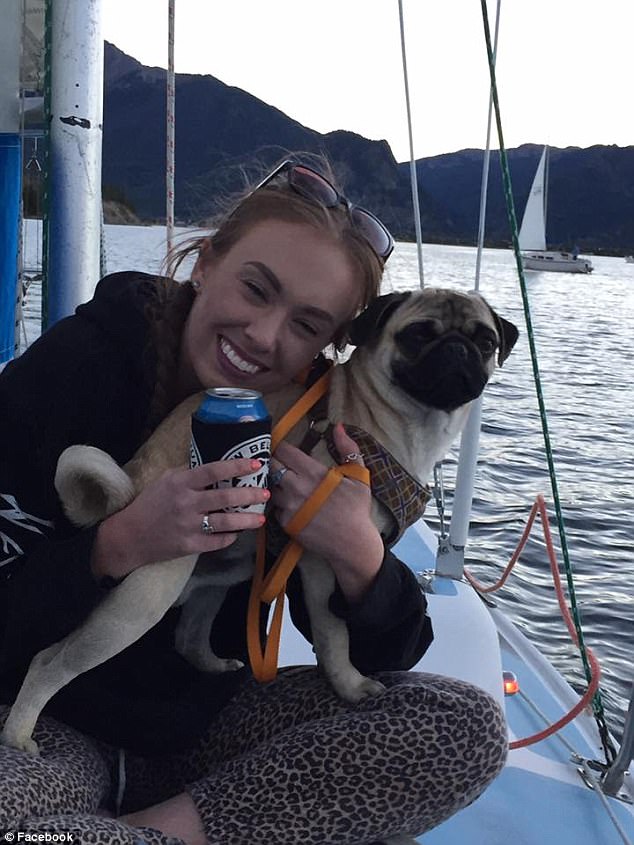 Walsh and Broadwell met when Broadwell moved to Philadelphia, where Walsh is from, to work

The couple, and Remy, had no choice but to jump overboard.

Neither Broadwell nor Walsh had any boating experience, but that didn’t stop them from buying the 49-year-old vessel from Alabama, last April.

They named it ‘Lagniappe,’ which is pronounced lanny-yap, and is Creole for ‘bonus.’

To get them vessel ready for their planned Caribbean adventure, they traveled in the 1969 Columbia sailboat along the Gulf Coast, from Alabama to Panama City with Broadwell’s father teaching them how to sail.

Broadwell’s father helped them get from the point of purchase to their eventual launching location. 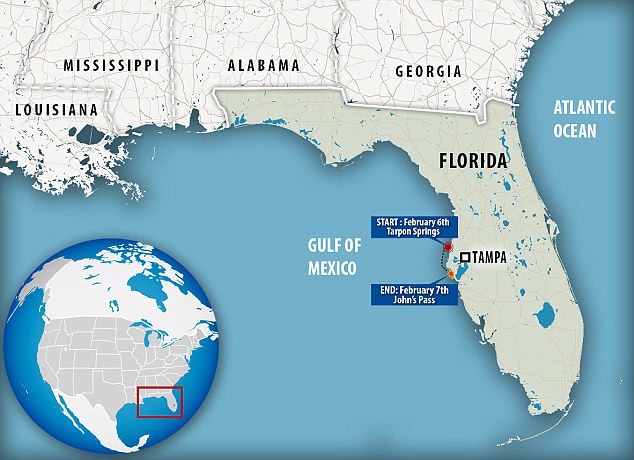 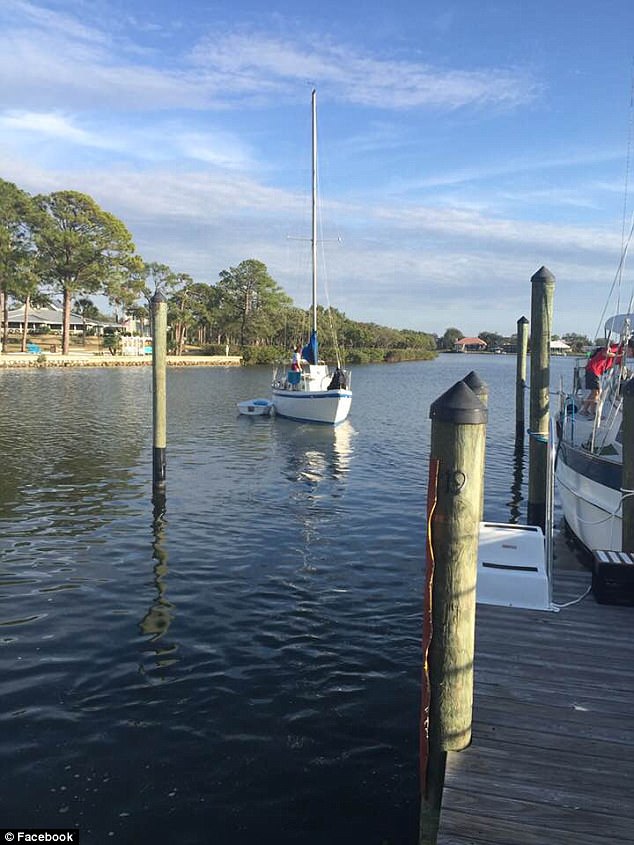 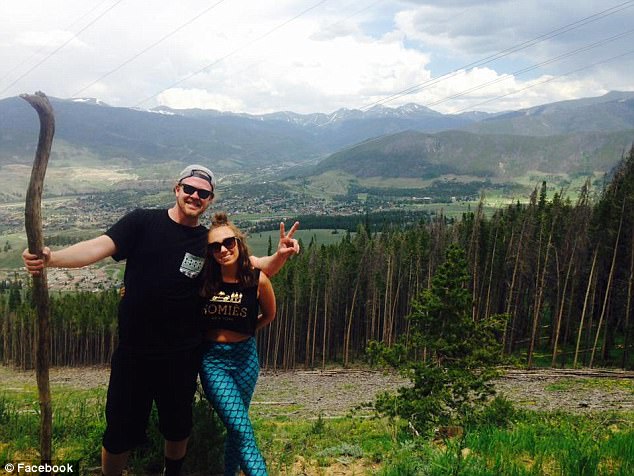 The two were sick of the work they were doing, and decided to try a Caribbean adventure 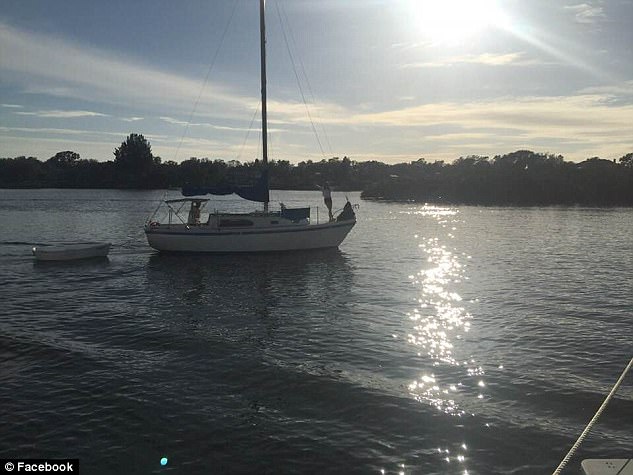 Neither Broadwell nor Walsh had any boating experience, but that didn’t stop them from buying the 49-year-old vessel from Alabama last April

Broadwell and Walsh docked the boat last May in Tarpon Springs, and prepped for their trip while docked at Mar Marina.

Broadwell and Walsh came into each other’s lives when Broadwell moved from Cocoa Beach to Philadelphia for work, where Walsh is from.

The two met, became friends, grew closer and eventually dated before moving to Breckenridge, Colorado together in 2015.

Soon after the wreck their story spread and they started a GoFundMe titled ‘Couple’s Sunken Dreams,’ to help pay the $10,000 fee it would cost to have the wreck removed from the waters.

The far surpassed their goals raising over $16,000.