An influencer has faced backlash after ‘lamenting’ the deaths of her loved ones in an Instagram post, before swiftly tagging her outfit details.

Marissa Casey Grossman, 30, from New York, was slammed online for the post which showed her and husband Gabriel, 30, relaxing on luxury Italian island Capri.

Having listed those who ‘shined down on her,’ she went on to say she was ‘living her best life for them’ – before mentioning the swimsuit brand she was wearing because ‘they’d all want to know too.’

It quickly drew attention on Twitter, with many of Marissa’s followers admitting they were stunned by the caption.

Marissa Casey Grossman, 30, from New York, shared a snap where she posed alongside husband Gabriel (pictured) – but it was the caption that received swift backlash online

In the caption for the post, she lamented how she was living her best life for ‘those that shine’ on her everyday before writing ‘because they’d all want to know too’ and tagging her swimsuit brand

In the Instagram post, which was shared at the weekend, Marissa wrote: ‘To the moon and back!!!!! Living our best lives for Meme, Michelle Blumenthal, Sam Allen, Aunt Sue, Gabe’s Grandparents, Lauren Marcus…. and all those that shine on us everyday.’

‘Because of you that left us way to soon— we try our very hardest to never take any day for granted and to always be grateful.’

She added: ‘Everyday counts. And…. because they’d all want to know too, swimsuit is @montce_swim.’

And while many of her followers commented on how ‘cute’ and ‘beautiful’ the message was, others couldn’t help but admit it made them feel slightly uncomfortable. 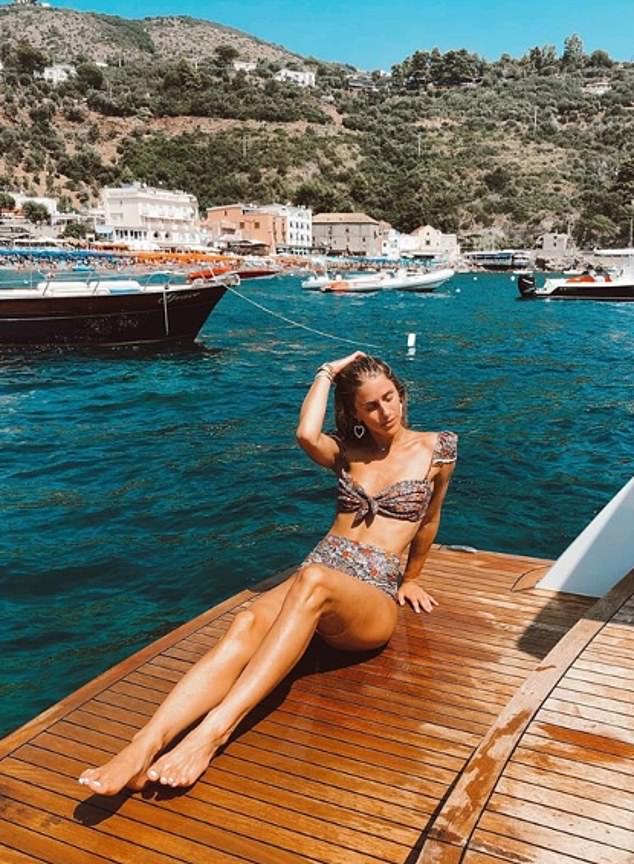 In one Tweet (pictured) which gained almost 2,000 likes, a Twitter user slammed the influencer for ‘lamenting the deaths of a loved one,’  before tagging her swimming costume in the second

In a Tweet which received almost 2,000 likes, one social media user commented on the post with disdain.

Sharing a screenshot of the message, she penned: ‘Influencing is lamenting the death of your loved ones in the first sentence, and then making sure everyone knows where you got your swimming costume from in the next sentence.’

In response, one commented: ‘I hate but love people like this just to make myself feel better for not being so vacuous.’

Another added: ‘I hate influencers. I really do. So much self-entitlement b*****.

Other Twitter users were quick to slam Marissa, with one commenting: ‘I hate Influencers. So much self-entitlement b******’

And Marissa herself addressed the post in her Instagram story and wrote: ‘While I do appreciate your concern and comment about my five best friends who passed away and my grandmother and my aunt – I am pretty certain if they are looking down on me, they want to know what I am wearing.

‘I know that sounds weird but my grandmother got so much joy in life through me pursuing clothes with my friends Lauren, Michelle and Samantha – I was friends with them all since I was 5 – 25.’

She went on: ‘Just because someone passes away doesn’t mean we need to focus on the “sadness.” I am confident that they would appreciate this message.’

‘So please think before you speak about my best friends that all passed away from cancer, getting hit by a f****** garbage truck, tumours, diabetes and so many other terrible complications.’ 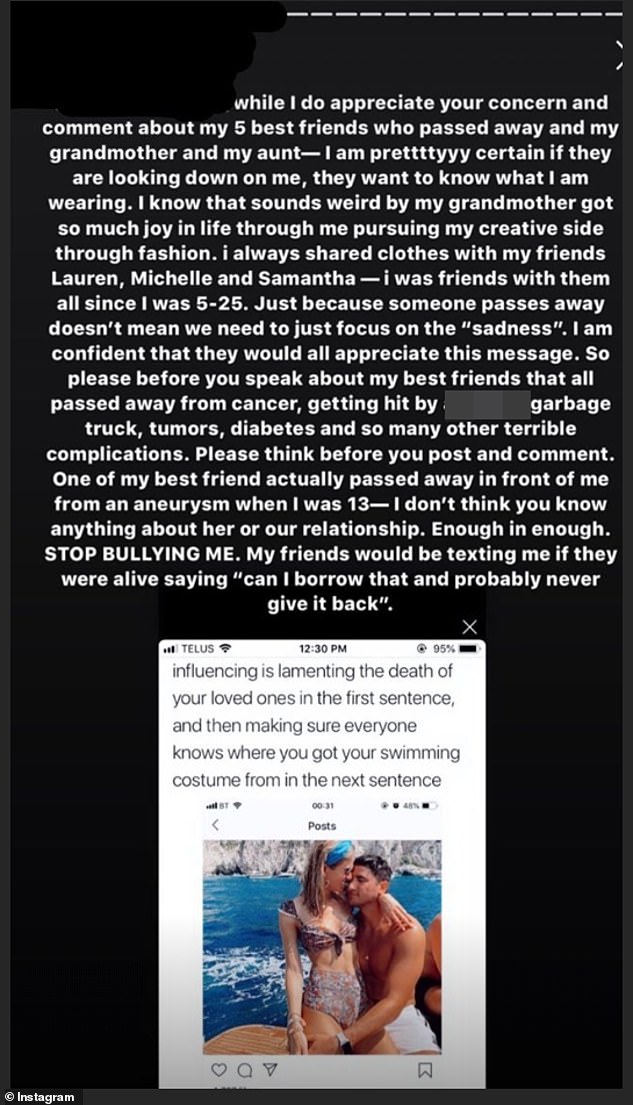 ‘Please think before you post and comment. One of my best friend actually passed away in front of me from an aneurysm when I was 13 – I don’t think you know anything about her or our relationship.’

She added: ‘Enough is enough. Stop bullying me. My friends would be texting me if they were alive saying “can I borrow that and probably never give it back.”

It’s not the first time that Marissa, who works at Gwenyth Paltrow’s lifestyle company, has faced controversy in the past few months.

Earlier this summer she was accused of staging her partner’s proposal, which went viral.

She had been sharing the details of a scavenger hunt that her boyfriend sent her on with her Instagram followers.

The journey saw her being gifted items, including clothing and several pieces of expensive jewellery, as well as being taken to Montauk and Miami, with the final leg of the trip in Paris.

However, after images of a deck outlining a full itinerary and an invitation for brands to ‘align’ with the proposal surfaced, social media users have accused the couple of staging the extraordinary proposal. 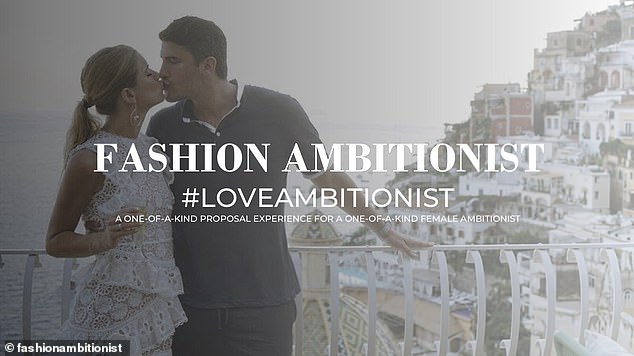 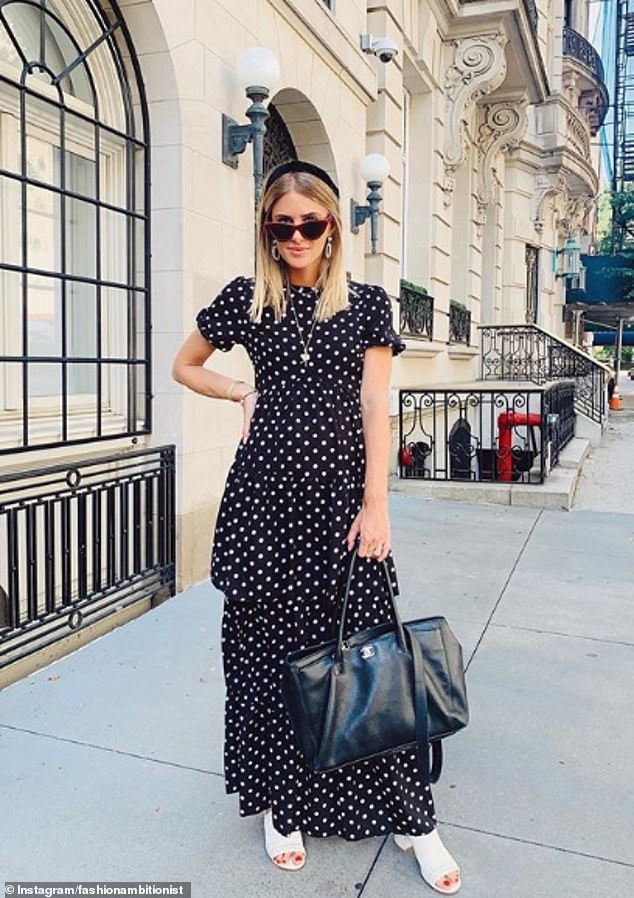