Always forgetting to charge your phone? Laser technology that wirelessly beams power from 100ft away could automatically charge your devices when you walk into a room

Waking up to find that your phone hadn’t been charging overnight can put a dampener on the day ahead.

But what if you didn’t have to remember to plug in your devices, because a laser beam did it for you automatically?

Researchers at Sejong University in South Korea have developed a new charging system that uses infrared (IR) light to transfer power to electronics up to 100 feet  (30m) away.

They hope the discovery could lead to technology that automatically charges a phone as soon as it is brought into a room, including public places like airports and supermarkets.

Research team leader and associate professor Dr Jinyong Ha said: ‘The ability to power devices wirelessly could eliminate the need to carry around power cables for our phones or tablets.

‘It could also power various sensors such as those in Internet of Things (IoT) devices and sensors used for monitoring processes in manufacturing plants.’

Researchers at Sejong University in South Korea have developed a new charging system that uses infrared (IR) light to transfer power to electronics up to 100 feet (30 m) away. They hope the discovery could lead to technology that automatically charges a phone as soon as it is brought into a room 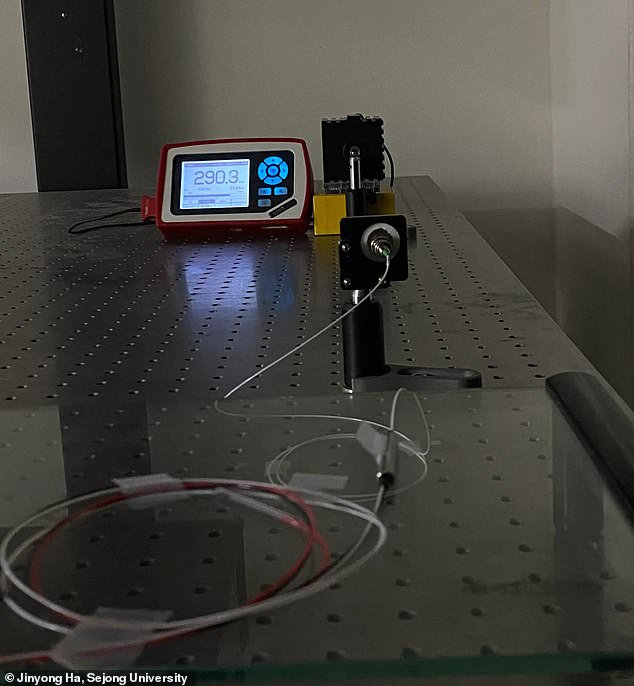 The system includes a transmitter with an optical amplifier power source that produces infrared light,  and a receiver with a ball lens that can pick up beams from any direction

HOW DOES THE CHARGER WORK?

The new charger is described as a ‘distributed laser charging’ system.

This means that it is comprised of a transmitter and receiver.

The transmitter produces a beam of IR radiation from an optical amplifier.

This is absorbed by a photovoltaic cell on the 0.4-square-inch (10-square-mm) receiver, that is fitted onto an electronic device.

The cell can convert the light energy into electricity to power the device, and the receiver’s ball shape lens also allows for it to pick up incoming beams from any direction.

While wireless charging is already a function of many new gadgets, it often involves putting the device on a dock or special surface, meaning it cannot be moved far while charging.

Engineers are working to remove these necessities and allow for power to be transferred over longer distances, but this often involves bulky and complex equipment.

In the study, published yesterday in Optics Express, a ‘distributed laser charging’ system is described that involves just two pieces of kit; a transmitter and a receiver.

The transmitter produces a beam of IR radiation from an optical amplifier, and can be plugged in to an energy source in a room.

The light has a ‘safe’ central wavelength of 1550 nm and passes through a filter to create a beam that poses no danger to human eyes or skin at the power used.

The 0.4 x 0.4 inch (10 x 10 mm) receiver has a photovoltaic cell that can absorb this light and produce electricity, and can be fitted onto everyday electronics.

The receiver’s ball shape lens also allows for it to pick up incoming beams from any direction and focusing it into a point in its centre.

This means that the transmitter does not need to track or lock in on the receiver.

‘While most other approaches require the receiving device to be in a special charging cradle or to be stationary, distributed laser charging enables self-alignment without tracking processes as long as the transmitter and receiver are in the line of sight of each other,’ said Dr Ha.

If something obstructs the line-of-sight between the transmitter and receiver, it automatically switches to ‘safe power transfer mode’ and lowers the intensity of the beam.

The transmitter produces a beam of IR radiation from an optical amplifier (EDFA) that can travel to the photovoltaic cell on the receiver over 100 feet (30 m) away. PD: photodiode (LED), PV: photovoltaic 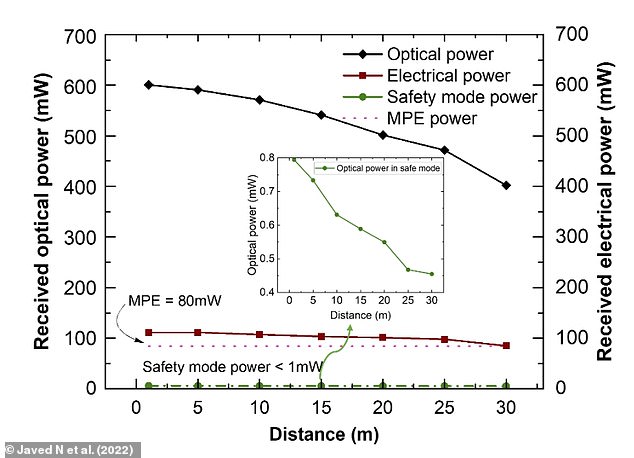 Effect of increasing the transmitter-receiver distance on optical power absorbed by the receiver (black) and the electrical power it is transferred into (red). MPE = Maximum Permissible Exposure limit

During testing, the team were able to transmit a 400 mW beam of light over a distance of 100 feet (30 m), which was converted into 85 mW of electrical power.

This would realistically only be enough energy to power a small sensor, let alone a smartphone, however it is hoped it could be scaled up in future.

The team is currently working on improving the efficiency of the photovoltaic cell in the receiver, so it can convert more of the beam’s energy into electricity.

They are also interested in finding ways of charging multiple devices at once.

Dr Ha said: ‘Using the laser charging system to replace power cords in factories could save on maintenance and replacement costs.’

‘This could be particularly useful in harsh environments where electrical connections can cause interference or pose a fire hazard.’

Apple will have to change the connector on iPhones sold in the European Union (EU) by 2024, following its new regulations.

The rule, announced in June, means Apple will have to change the charging port on its iPhones in all 27 EU countries.

The EU wants a uniform charging cord for smartphones and other devices to reduce electronic waste, but Apple argues this would limit innovation and hurt consumers.

However, a UK government spokesperson has since told MailOnline: ‘We are not currently considering replicating this requirement.’

The union estimates that discarded or unused chargers account for 11,000 metric tons of e-waste in Europe every year.