The elderly hiker who was airlifted from an Arizona mountain and was violently spun out of control while suspended in mid-air on a stretcher is suing the City of Phoenix for a stunning $2million.

On June 4 Katalin Metro, 74, was hiking off Piestewa Peak in Phoenix when she reportedly tripped along the train, became disoriented and needed help getting back down.

But her rescue turned into a frightening experience as she was wrapped up and strapped into a stretcher and lifted by a helicopter off the ground, and began to violently spin at a rapid pace for a full 60 seconds while suspended mid-air.

On Tuesday Katalin Metro and her husband George filed a notice of claim against the City of Phoenix claiming she suffered physical, emotional and psychological injuries and damage as a result of the incident, according to Fox10.

Katalin and George Metro filed a notice of claim against the City of Phoenix for a stunning $2million for a helicopter rescue incident this past summer. On June 4 Katalin Metro, 74, was airlifted off of Piestewa Peak and while strapped to a stretcher that violently spun out of control while suspended in mid-air. 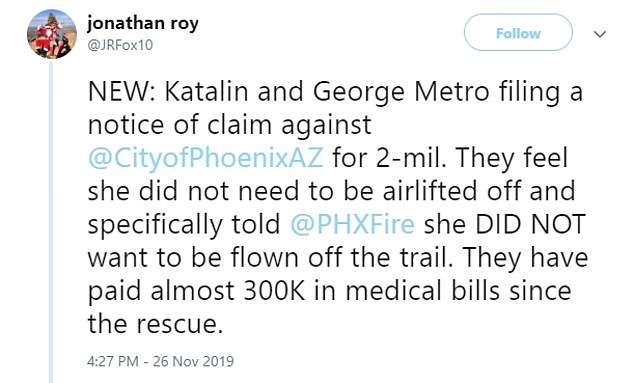 The news of the lawsuit was first reported on Tuesday evening. The claim says that Katalin specifically said she did not want to be airlifted off the trail and as a result of the dangerous rescue, she has paid nearly $300,000 in medical bills

The claim states that Metro told first responders that she did not want to be taken off the trail by a helicopter but was airlifted anyways.

‘Katalin Metro’s injuries were caused or contributed to by the negligence, negligence per se, gross negligence, carelessness and/or other fault on the part of the City of Phoenix,’ the claim said.

The claim asserts that Metro was taken to John C. Medical Center following the harrowing helicopter rescue and a doctor said she suffered swelling and bruising to bilateral eyes, blood in her external auditory canals and soft tissue swelling over parts of the skull. 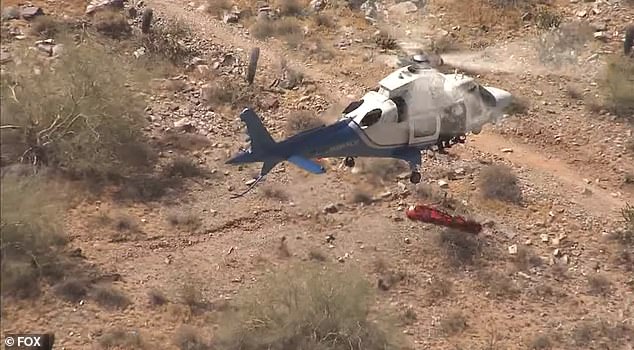 In the frightening June 4 helicopter rescue Katalin was spun in her stretcher over 100 times at a rapid pace, which the claim alleges left her with swelling and bruising to her eyes, bleeding in her auditory canals, and tissue swelling in her skull

As a result she was transferred to a rehabilitation unit at St. Joseph’s Hospital and Medical Center on June 11 and was later discharged on June 28.

Starting in July Metro began outpatient therapy which cost over $290,000 for the months of June and July.

The couple are reportedly willing to settle the claims for a sum of $2million.

The helicopter was traumatizing for both Katalin and her husband George who watched with horror as she spun helplessly in the air.

‘They just—one of them said, “Oh my gosh,” Metro said. ‘I think they were waiting for the spinning to stop just like I was.’

George wasn’t sure if his wife was alive or dead as she spun.

He was relieved when he met her at the trauma center where she was getting evaluated.

‘The first thing she said was, “I’m glad I’m alive.” She thought she was going to die when she was spinning,’ the husband said. 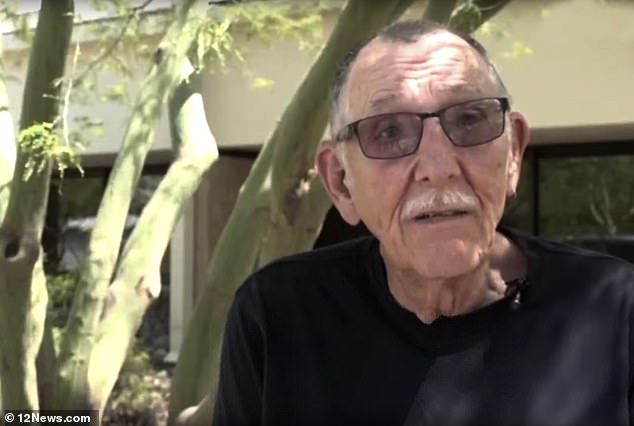 George shared that his wife did deep-breathing exercises so that she could keep from passing out.

He added: ‘The blood was going to her head and eyeballs.’

Derek Geisel, who was piloting the helicopter during the rescue claimed that the line attached to the basket eventually broke and stopped working.

The spinning lasted for 40 seconds as the crew tried several times to raise and lower the basket.

‘When they start to lower the load, [the basket] does actually start to stop. And then we slowly brought it back up, it gets into the same downwash from the aircraft and it started to spin again.’

‘Once we got the forward flight, the spin got to the point where they were safely able to bring the patient up to the aircraft,’ Geisel said.

The helicopter then landed at a parking lot at the base of Piestewa Peak and Metro was taken to a nearby hospital for evaluation.

Firefighters say the woman was nauseous and dizzy after the rescue, but was in stable condition.

Phoenix Fire Captain Bobby Dubnow claimed at the time the woman suffered no ill effect from the spin.

He said: ‘She suffered no ill effect from that spin other than being a little bit dizzy, as soon as we landed with her at the base landing zone and got her to the definite treatment of the crews that were waiting.

‘They addressed the fact that she did spin, she had a little bit of dizziness and some nausea that they were able to give some medications for and reports are that she is stable and suffered no effects from the spin.