Wales go into their final autumn Test against Australia ‘battered and bruised’ with 19 players set to be out injured – but are determined to fight on.

Their latest medical update was grim. Lock Will Rowlands and prop WillGriff John are not expected to pass their head-injury protocols in time, after concussions against Fiji, and late calls will be made on Tomas Francis (also concussion), Josh Adams (calf) and Aaron Wainwright (shoulder) who all missed Sunday’s 38-23 win.

It means Wales could be without 16 top forwards for the Wallabies – with Lions stalwarts Alun Wyn Jones, Ken Owens, Justin Tipuric, Taulupe Faletau the main casualties – and cannot call up the likes of Samson Lee or Leon Brown as prop cover, as they are injured too.

‘There’s a team here who are battered and bruised off the back of the most challenging autumn that they’ve ever had,’ said forwards coach Jonathan Humphreys.

‘It forces you to develop. It just makes us go deeper, try and find solutions and you find out about people.

‘There’s no excuses in this sport.’

Lions loose-head prop Wyn Jones may now have to cover tight-head, if Francis is not fit. 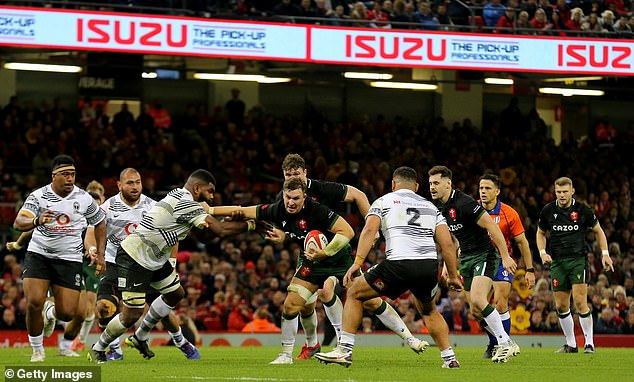 Humphreys, despite it all, has been heartened by the performances of flankers Taine Basham and Ellis Jenkins, hooker Ryan Elias and prop Rhys Carré who will all play on Saturday.

‘It has turned out very similar to the last autumn, where we found out a lot about people,’ he concluded.

‘Rather than look at the negatives of we’re missing all these people, and has it maybe stopped us winning against particularly South Africa, the bigger picture is telling us we’ve got a team that can fight toe to toe with all those injuries and that’s a huge positive.’