The sister of the British-educated Sri Lanka suicide bomber has revealed how he became radicalised abroad and ended up ‘really angry and totally crazy’ – even telling off male relatives for trimming their beards.

In an exclusive interview Samsul Hidaya said Abdul Lathief Jameel Mohamed had been educated to the highest level but became increasingly withdrawn and intense as he descended into extremism. 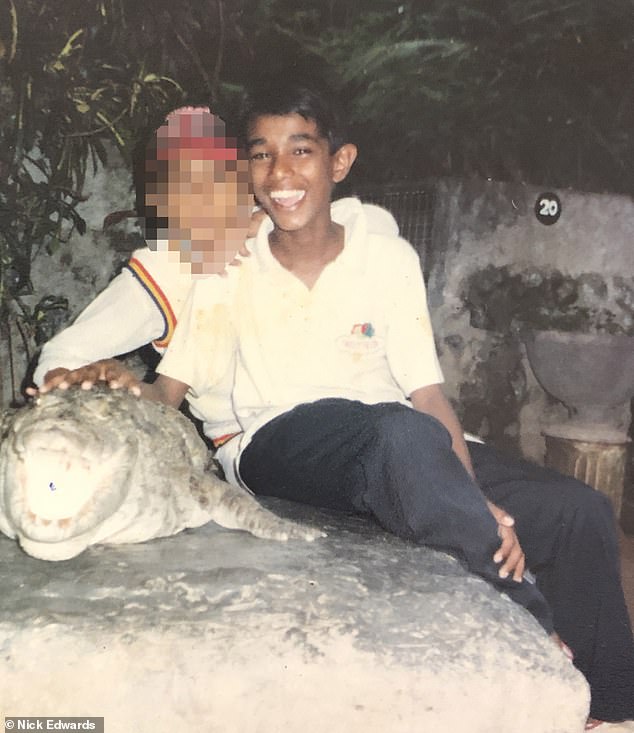 Mohamed’s sister opened the family photo album to show childhood pictures of the future bomber show the practical joker as a teenager, laughing with friends as he posed with a crocodile and other animals before he became radicalised 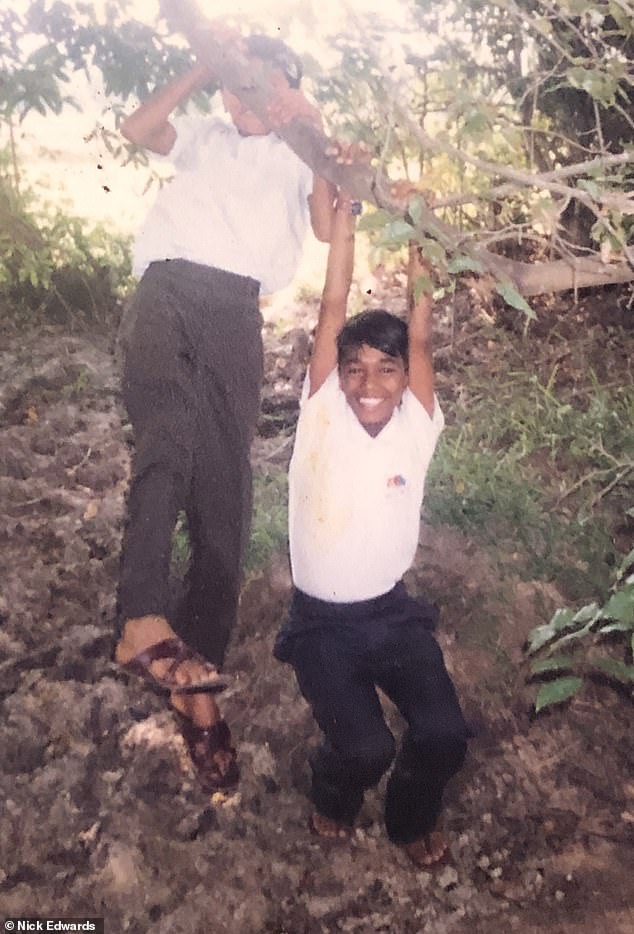 In an exclusive interview, Mohamed’s sister said had been educated to the highest level but became increasingly withdrawn and intense as he descended into extremism 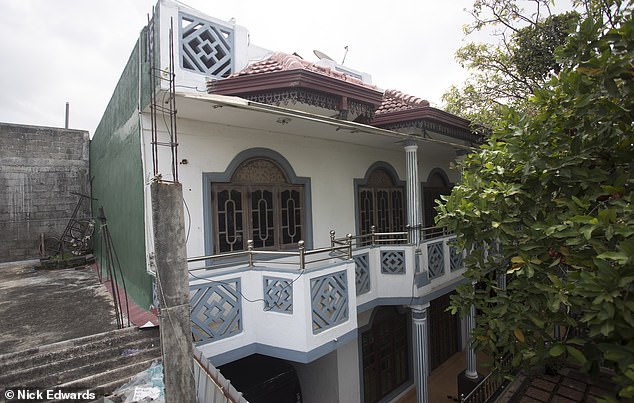 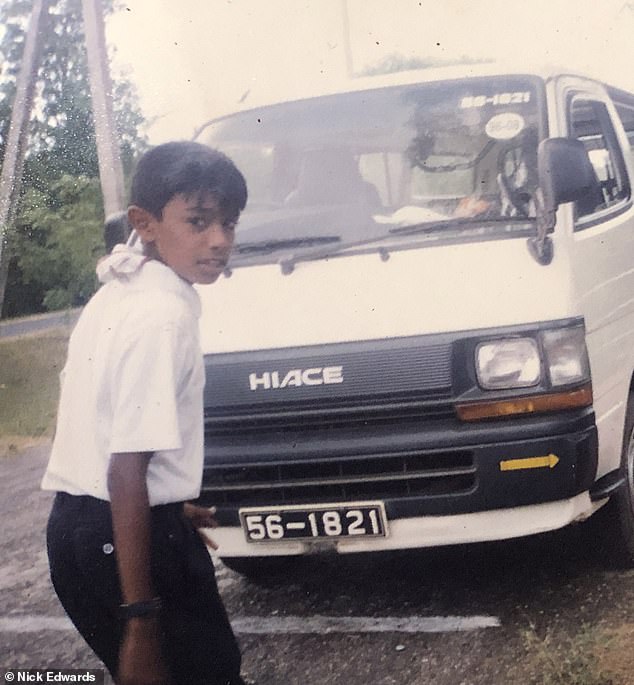 Mohamed tried to blow up the luxury Taj Samudra hotel in the Sri Lankan capital Colombo on Easter Sunday.

But he is believed to have botched his attempt to detonate his bomb at the five-star hotel and is thought to have blown himself up by accident at a much smaller guest house.

British investigators are searching for any associates or signs of extremist activity during his time in the UK.

Recalling the shock of his involvement in the atrocity which claimed 359 lives, Mrs Hidaya opened the family photo album to show childhood pictures of the future bomber show the practical joker as a teenager, laughing with friends as he posed with a crocodile and other animals.

‘He was a music lover and a funny boy,’ his sister said. ‘It makes me sad to think what happened to him. Before he died he would not let his children listen to music and he never said a friendly word to anyone.’

Even as a child he was always devout, she added, but had ‘never taken it too far’. But on his return from Australia, he ‘created tension’ by berating his family for their religious lapses, she said.

‘I had many arguments with him,’ his sister recalled. ‘At first he started quoting scripture and I would say OK, you’re right.

‘But then the conversation got deeper and deeper into religion and I couldn’t follow what he was saying any longer.

‘He told male relatives off for trimming their beards and became angry and totally crazy. So I just stopped speaking to him because it got to the point where it was getting out of hand.’

Although Mohamed lived round the corner, the siblings avoided each other. She he came to visit their mother, who lived with Mrs Hidaya, he would ignore her.

‘We even started using different roads to go to and from our houses,’ she said.

But despite his evident fanaticism, the news of the Easter atrocities came as a shock. ‘When the police came to tell us it was him, I almost collapsed,’ Mrs Hidaya said.

‘I just didn’t think he would take it this far. I am still in disbelief. Something happened to him in Australia that changed his personality. He became silent and aloof.’

Mohamed’s wife, who he married in a lavish ceremony before moving to Australia, was a ‘silent and anonymous’ character, Mrs Hidaya said.

She has been taken into police custody and their four children, aged six, four, two and six months, are being cared for by their grandmother in the home where the atrocity was planned.

Mohamed’s identity came to light after Sri Lanka’s defence minister, Ruwan Wijewardene, told a media briefing earlier on Wednesday that one of the bombers had studied in the UK and done postgraduate studies in Australia before returning to settle in Sri Lanka.

Mrs Hidaya said her brother, born in 1982 to a family with six siblings, was from a wealthy tea trading family based near the central city of Kandy.

He was educated at the nearby Gampola International School before studying for his A Levels at the Royal Institute, a well-known international school in Colombo.

Ten years ago, after his father, Abdul Latif, died, his mother, Samsun Nissa, moved the family to Colombo, renting the upper floor of a mansion in a majority Muslim eastern suburb.

After returning from studying in Britain, he moved into the property and fell in love with their landlord’s daughter, Shifana, who came from an affluent meat-trading family.

They married before moving to Australia so he could pursue his postgraduate studies. 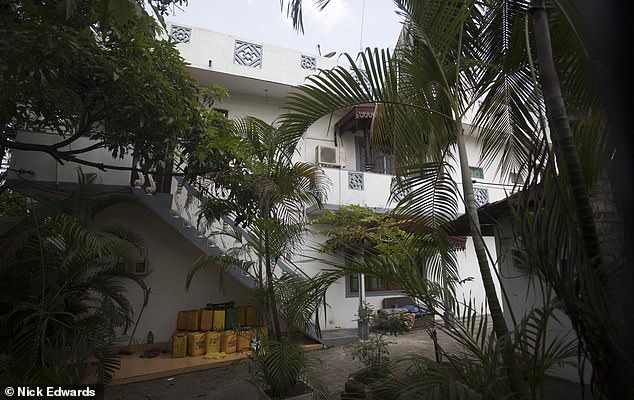 Mohamed, who had his first child in Australia where he is believed to have become radicalised, moved back to Sri Lanka to live in the mansion (pictured) his family previously rented

Mohamed’s younger sister married a Sri Lankan New Zealander and emigrated to Auckland with their mother.

Her brother, who had his first child in Australia, moved back to Sri Lanka to live in the mansion his family previously rented.

His grandfather had left him an extensive property portfolio when he died, including the family home in Kandy. As a result, the trained aeronautical engineer did not need to work.

‘Before he died he was selling the family home,’ Mrs Hidaya said. ‘He obviously needed a sum of money.

‘But he never wanted for anything in his life. From time to time he sold or bought a property. He never had to worry about money like ordinary people do.’

Sri Lanka bomb plot ‘mastermind’ is denounced by his sister

The sister of alleged Sri Lankan terror attack mastermind Zahran Hashim has denounced her brother over the blasts which killed 359 people on Easter Sunday.

Mohammed Hashim Madaniya, who grew up with Zahran in the small coastal town of Kattankudy, said they were close as children and that he was ‘kind to everyone’.

But she revealed that she hasn’t been in contact with her brother since 2017 when he went into hiding, accused by police of causing violence between Muslim groups. 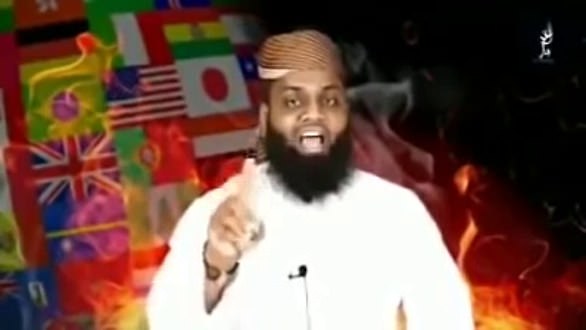 Speaking to the BBC, she explained that she was the youngest in a family of five children and that Zahran – believed to be around 40 – was the oldest.

Madaniya said she was horrified when news of Zahran’s involvement in the attacks spread through the media.

She said: ‘I came to know about his activities only through the media. I never thought, even for a moment, that he would do such a thing.

‘I strongly deplore what he has done. Even if he is my brother, I cannot accept this. I don’t care about him any more.’

Madaniya said she has been quizzed by police but is not being treated as a suspect.

She added that she is fearful of what might happen next, as authorities have not yet confirmed whether Zahran is dead.