Can you spot what’s wrong with this photo? Seemingly innocent snap shows a beanie-clad shopper picking out Christmas gifts – but something’s not quite right

Christmas is a time of year that sees millions of Australians from all walks of life flock to buy gifts for their loved ones.

And as this photo proves, the shopping bonanza inevitable brings some of the year’s more unusual moments.

The photograph focuses on a beanie wearing shopper as they wander around the isles of a supermarket looking for presents.

But what at first seems like a photo of a solo shopper, a closer inspection reveals they’re not so lonesome after all.

At first glance, the photo appears to show a beanie wearing shopper, simply scanning the isles for Christmas presents

If you look closely at the shoppers black shorts, you’ll see a tiny face of a dog peering its head out of their pocket.

Nestled comfortable deep down into the shorts, and its head resting on the outside, the dog appears to be on the brink of taking a nap, perhaps all tuckered out from a full day of Christmas shopping.

But by the looks of their trolley, they had a while to go yet.

The adorable pooch photo, which was uploaded to dog lovers Facebook group Cool Dog Group has users squealing at its cuteness. 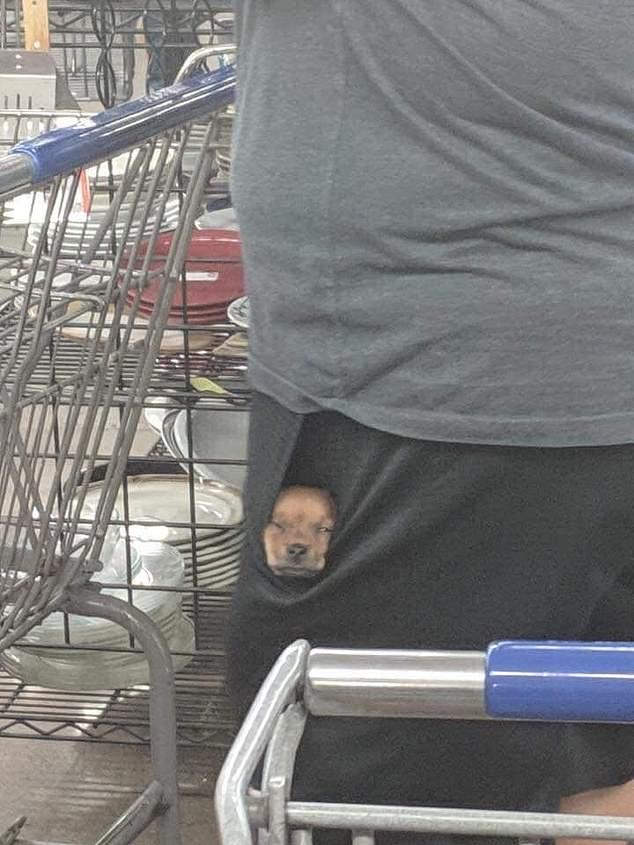 Hello there: On closer inspection however, it shows the lonesome shopper is anything but, they have a furry friend nestled deep in their pockets, having a rest from all the shopping

‘This is what pockets are for,’ another exclaimed.

‘Pocket dog life is the only life,’ another Facebook user said.

Other users praised the lengthy room the pockets had to accommodate the puppy.

‘I’m going to buy some puppy smuggler shorts over the Christmas break,’ one user confessed.