A 999 call handler has admitted she may have offered false hope to Grenfell Tower residents who believed a helicopter was coming to rescue them.

London Fire Brigade control room officer Christine Howson was responding to the desperate pleas of trapped a resident on the night of June 14 blaze.

Nura Jemal, 35, died alongside her husband and three children in last year’s June 14 fire. She had been in a flat where a caller asked London Fire Brigade control room officer Christine Howson whether a helicopter might be on its way 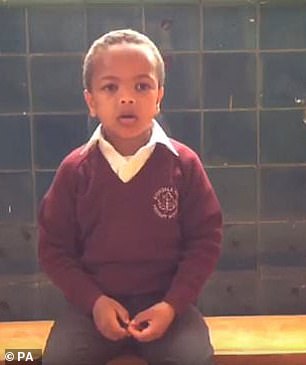 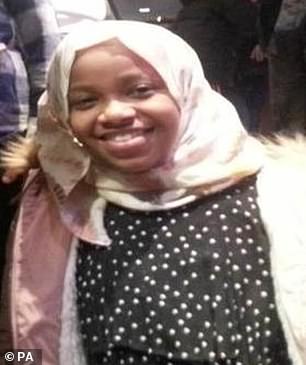 Yaqub Hashim, six, (left) and Firdaws Hashim, 12, (right) died alongside their parents and brother in the devastating blaze. It emerged today that a 999 call handler may have told someone in their flat a helicopter was on its way to rescue them

Transcripts of emergency calls made from their flat on the high-rise’s 22nd floor were shown at a public inquiry into the blaze today.

To which Ms Howson responded: ‘There’s one there, okay, all right? The fire brigade are on their way now. They’re making their way.’ 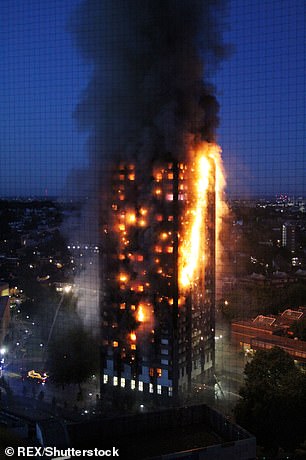 The devastating blaze on June 14 last year killed 72 people. A public inquiry is underway where harrowing 999 transcripts are being shown – including that of a mother who died alongside her two-year-old son in the blaze

Ms Howson was asked at the inquiry if this might have offered ‘the hope or expectation that they would be rescued by helicopter’.

‘Possibly, yes,’ she said. ‘It possibly could have done that. That was not my intention though.’

The officer was taken through several 999 calls she handled on the night of the fire and questioned about the advice she gave.

‘The policies we had, which had always worked in the past, they weren’t working.’

The revelation came on the same day a harrowing 999 call made by a mother who died alongside her two-year-old son in the fire was shown at the public inquiry.

Zainab Deen, 32, and toddler Jeremiah both died after becoming trapped on the 14th floor of the burning high-rise in west London.

In the devastating call, Ms Deen can be heard saying ‘I feel like jumping’ and ‘can anybody come and rescue me’ as the flames spread around her flat. 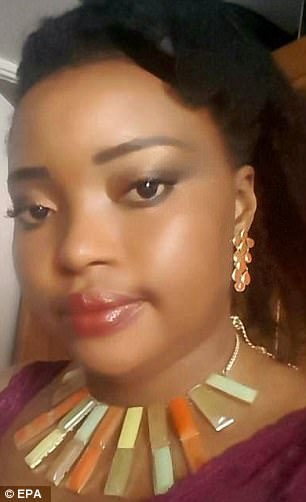 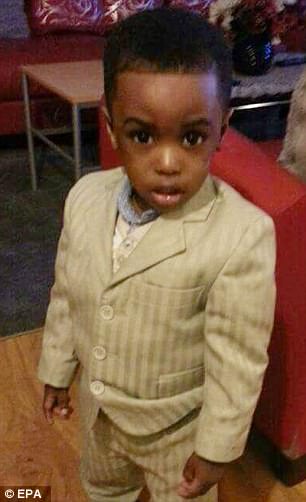 Zainab Deen (left), 32, and toddler Jeremiah (right) both died after becoming trapped on the 14th floor of the burning high-rise in west London. In a harrowing 999 call shown at a public inquiry into the blaze today, it was revealed how Ms Deen pleaded with emergency services for help 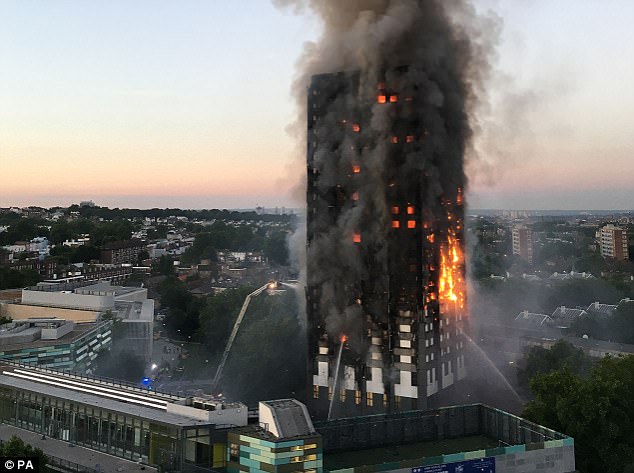 The world watched in horror as the block went up in flames on June 14, 2017. The inferno ended up killing 72 people and a public inquiry into the incident is currently underway

The transcript showed how the desperate mother asked: ‘How can I get out of here?’

The inquiry earlier heard that Ms Deen begged to join her dead son before herself perishing in the blaze.

Ms Adams, who has 45 years’ experience, told the inquiry she took more than 40 calls on the night of the fire.

‘It just went mad,’ she said. ‘There was so much happening, it was just horrendous.’

In a statement, the officer recalled the moment a colleague showed her a picture of Grenfell Tower.

‘I could not believe it was on fire, the whole building. I thought to myself ‘Oh my God, these people are dead’,’ she said.

‘How could they get out? I felt pure shock.’ 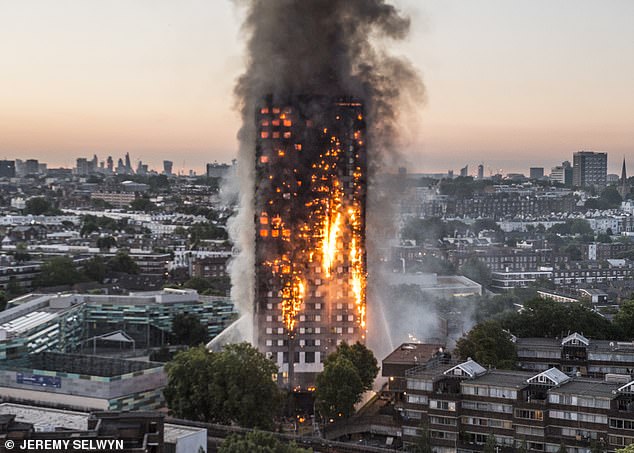 The public inquiry into the Grenfell Tower fire (pictured on June 14, 2017) today revealed harrowing 999 transcripts made by people trapped in the burning tower block

He told how he reassured the frantic mother, who identified herself as Zenay, that they would be rescued after being handed a phone by her brother, Francis.

He said he heard the little boy crying from the beginning of the call and said he was ‘gagging’ to hear the door kicked in by fire crews.

After about half an hour, the toddler stopped coughing and crying.

In a written statement to the inquiry, Nr Batcheldor said: ‘Zenay was crying ‘My boy’s dead’.

‘I then passed the phone back to Francis and said ‘Tell her you love her and that you are waiting for her. Tell her to keep fighting’.’

The inquiry heard details of other 999 calls made by people trapped in the burning tower block.

In one made from Flat 193 on the 22nd floor, where two families died, the caller said: ‘It’s full of smoke. The fire from the other side is over our building.’ 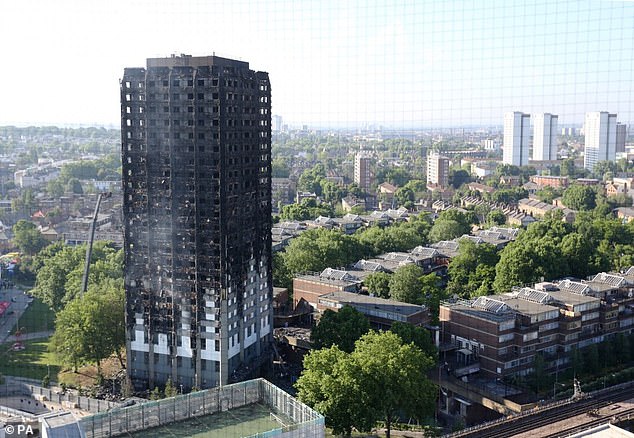 London Fire Brigade control room officer Yvonne Adams has described dealing with 999 calls that evening as ‘horrendous’. She told the inquiry that she and her colleagues did not have enough time to deal with each call the night of the blaze 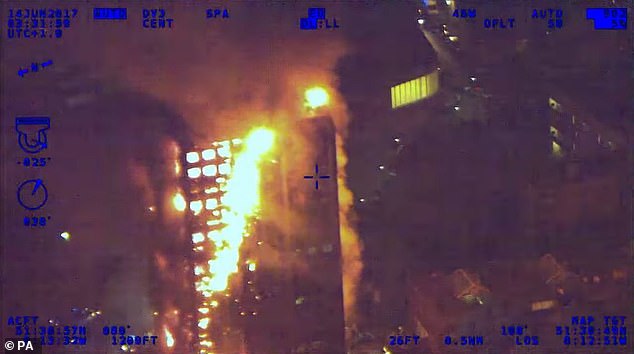 Helicopter footage shows the blaze racing along the outside of the building towards the roof. The public inquiry yesterday heard how the cladding ‘crown’ installed on top of Grenfell Tower ‘to make it look nice’ was instrumental in the deadly fire spreading

Ms Adams told them: ‘You make the decision whether you think you need to leave or not, all right?’

They decided to stay put, and Nadia Choucair, 33, her husband, Bassem Choukair, 40, their three children, Mierna, 13, Fatima, 11, and Zainab, three, and grandmother, Sirria, 60, all died.

Ms Adams advised another caller from Flat 182 on the 21st floor – home to the El-Wahabi family, who also died in the blaze, to get out, but was told: ‘We can’t.’

She said: ‘Get wet towels, wet sheets, anything, try and get out of the building. As you leave your flat think where the nearest staircase is and head for it and run, all right?

‘OK, I’m going to have to leave you. Sorry, we have got so many calls coming in. Just try to get out of the building.’

The caller said: ‘You can’t leave.’

Ms Adams told of the difficulty in having to end the call, saying: ‘(I) just didn’t have the luxury of time with these people. It’s just appalling.

‘It was just dreadful that you just had to leave them and just answer another call.’

She told the inquiry: ‘I think the thing we didn’t have on Grenfell night was that luxury of time to give to callers and we all have to live with that.

‘We were having to spend not as much time as we normally would. It was just horrendous.

‘We were just trying to get through as many calls as possible to pass those flat numbers to the crews and the scene for them to go and rescue them, and in some cases that didn’t work out.’