After over a decade as best friends and part of a global elite of ‘rock star fund managers’, the shock split of Magellan Financial’s billionaire equities group executives has come amid confirmation of a marriage break-up.

On Wednesday afternoon the Magellan billionaire he had partnered with, Hamish Douglass, and his wife Alexandra confirmed in a joint statement they had ‘separated some months ago’.

This comes just months after the ‘monastic’ Douglass, a fitness and fasting fanatic who says he’s not interested in the ‘trappings’ of wealth was photographed at St Tropez on James’ Packer’s superyacht. 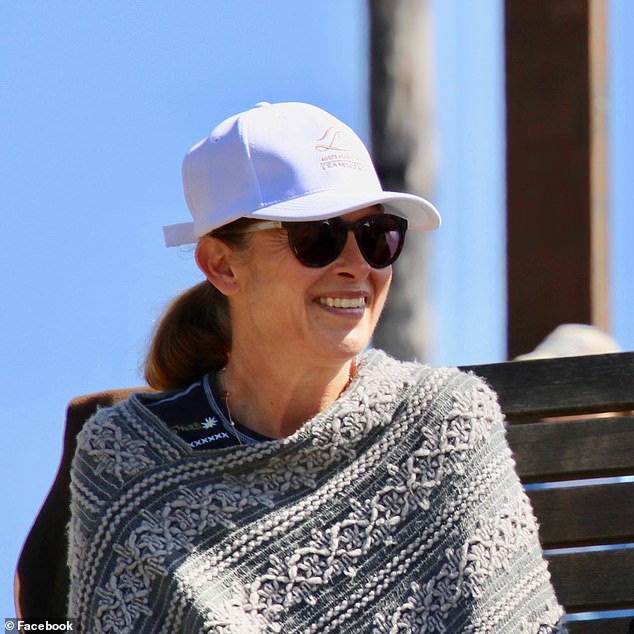 After Magellan’s CEO walked out on Monday, the billionaire funds manager announced another shock split – from his wife of 30 years Alexandra (above) on Wednesday 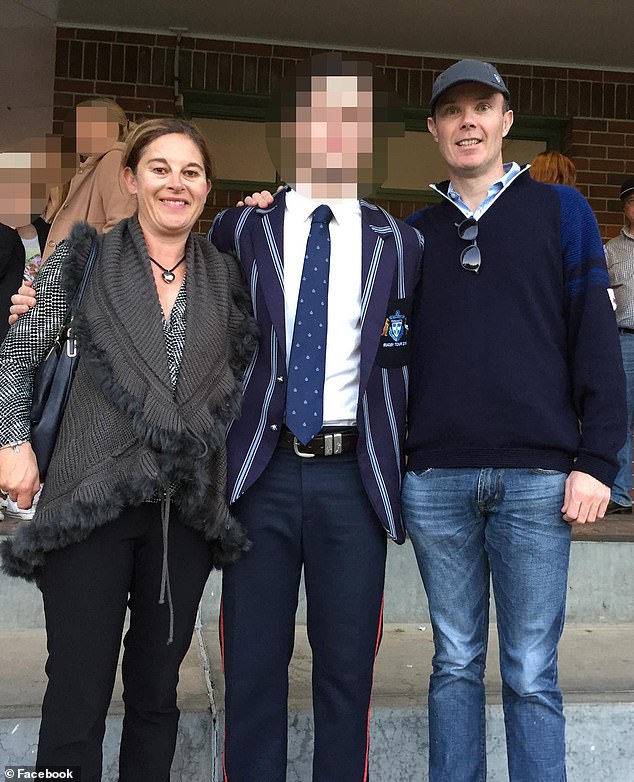 Hamish Douglass (right) and his wife Alex (above, left) separated ‘some months ago’ they said in a joint statement a day after his Magellan CEO fled their billion dollar equities company

But they denied there was to be a carve-up after the split of the  Douglass’ stake in Magellan.

Mr Cairns’ reasons for leaving were cited as ‘personal’, but not explained any further.

Before the sudden rift, the Magellan CEO had worked closely with the company’s chairman and chief financial officer Hamish Douglass for 14 years. 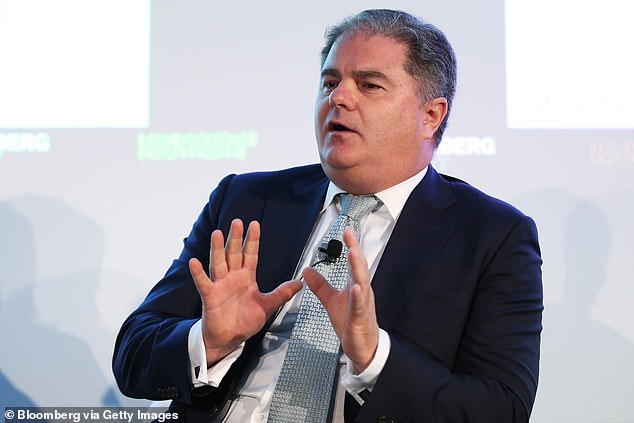 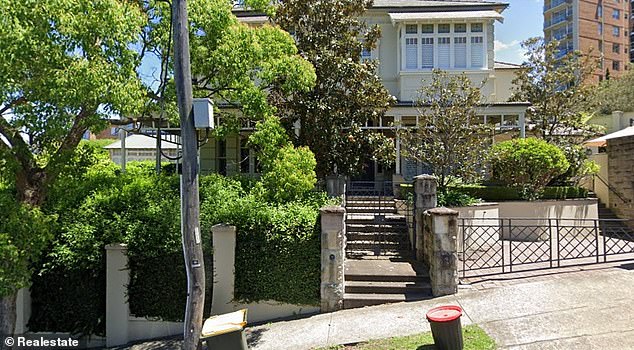 Alex and Hamish Douglass’s Neutral Bay home (above) has been undergoing a massive $3.3m renovation as the couple separated and Magellan slumped with financial woes 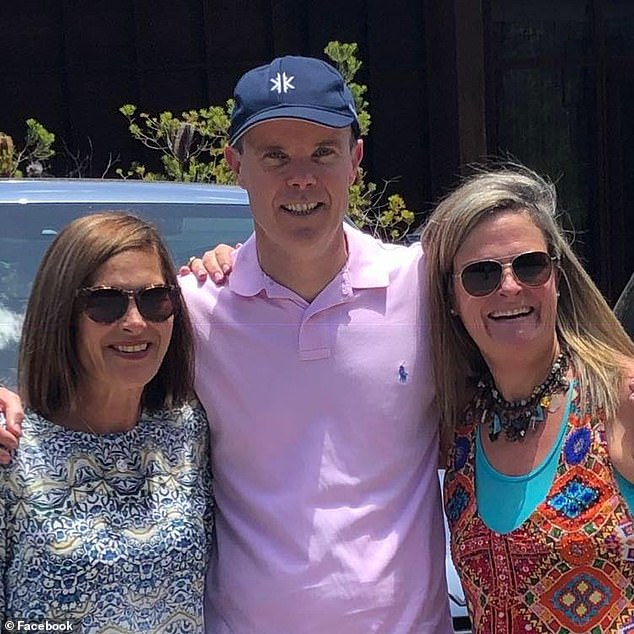 Before the split with his Ceo and his wife Alex (left), Hamish Douglass (centre) and Brett Cairns enjoyed a profitable partnership and owned luxury homes in Sydney and the Southern Highlands

Wednesday’s statement from the estranged couple read: ‘Alexandra and Hamish Douglass wish to confirm that they separated some months ago. As our family and close friends appreciate, we both remain extremely close and united.

‘We continue to spend considerable time together, and as a family. There has been unfounded speculation in the media regarding our shareholding in Magellan Financial Group.

‘We can confirm that we have no intention to sell any of our shares in Magellan Financial Group.’ 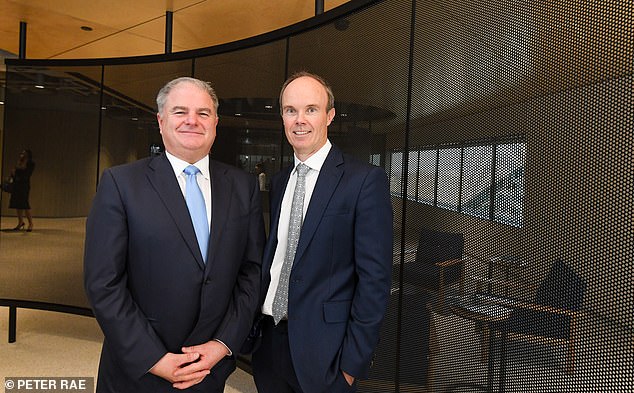 Brett Cairns (left) abruptly quit Magellan Financial on Monday where he and Hamish Douglass (right) had made a $116 billion success, sparkling a share plunge

Mr Douglass, who with his wife Alex have four children who have attended Australia’s most exclusive schools near their Sydney north shore and Southern Highlands homes, are regarded as unpretentious and down-to-earth.

Despite making money hand over fist until a slump in the global equity fund’s profits this year, Mr Douglass has proudly said that he avoids the ‘trappings’ of wealth and catches the bus to work.

A fitness fanatic who fasts for 16 hours every day, he exercises daily to combat a bad back with a routine that includes planking non-stop for 20 minutes.

Although causing concern among neighbours with the massive renovations on his muiltimillion Neutral Bay family mansion, Mr Douglass doesn’t own expensive cars, jets or yachts. 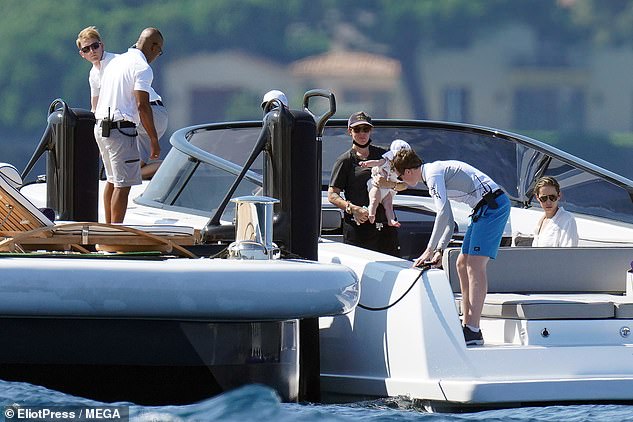 Hamish Douglass joined friends of James Packer at St Tropez where they were taken by boat to the $200m superyacht the casino billionaire named after his children, IJE

However he was photographed with fellow billionaire James Packer on the 53-year-old casino mogul’s $200m superyacht in St Tropez in the last week of July.

The gaming billioanire sought Mr Douglass’s advice in 2019 on how to invest the $1.8b he had just made after selling 20 per cent of his Crown Resorts to Hong Kong casino heir Lawrence Ho.

At the time, Mr Douglass’s Magellan Global Fund had made a 24pc cent return in one financial year, beating the benchmark Morgan Stanley Capital International (MSCI) index by 10pc.

‘I have known Hamish for a long time. I think his record speaks for itself,’ Packer said.

Now both aged 53, Mr Douglass and Mr Packer are former private schoolboys of Sydney’s elite The Kings School and Cranbrook and, respectively, fathers of four and three children.

In July this year, Mr Douglass flew to the French Riviera and spent several days with Packer on his 108m gigayacht IJE as it was moored off St Tropez.

By then, it might have been Mr Douglass who was seeking advice from Packer as Magellan’s fortunes were on the decline and Mr Douglass  – whose net personal worth had been more than a billion – had slipped from the billionaire class into merely a multi-millionaire. 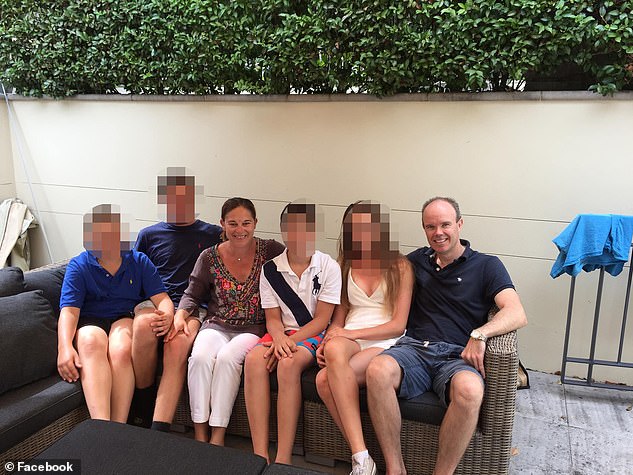 Hamish Douglass (right) and his estranged wife Alex (third left) sent their children to the state’s elite schools, but are regarded as ‘unpretentious’

Magellan Financial Group’s global equities strategy has endured two years of failing performance and now lags behind the MSCI benchmark, perhaps in its worst form since Brett Cairns joined Magellan’s board 14 years ago.

The AFR reported that a 12pc of Mr Douglass’s worth $646.4 million could be subject to a family law settlement – since denied by the Douglasses – and after Tuesday’s plunge Magellan’s share price is down 48 per cent from a year ago.

While Mr Douglass was sunning himself on Mr Packer’s boat during part of an overseas business trip, his family home was undergoing a $3.13m upgrade.

Changes to the two-storey Italianate dwelling include demolishing an existing swimming pool, building an attic room and rear addition, drilling a basement garage, a new driveway, and landscaping.

The earthworks for the renovation were reportedly noisy, but Mr Douglass’s DA included the provision for workers to puff on a fag at smoko time with a ‘cigarette butt receptacle provided on site’.

Hamish and Alex Douglass still have children in their teens.

Alex Douglass has a big interest in show jumping and the couple’s daughter Amelia, now aged in her early 20s, is a champion showjumper who has competed overseas.

Amelia is a former student at the exclusive Frensham School in Mitttagong, not far from where the family owns a large property at Moss Vale in the Southern Highlands.

In 2020, just weeks before he warned the near total shut down of the economy during the Covid-19 pandemic had the potential to trigger a depression, Mr Douglass bought the Moss Vale property Lylehurst next door to the family’s other Highlands getaway farm for $3.1 million.

In 2017, Brett Cairns, paid $7.5 million for a sub-penthouse in The Rocks’ Harry Seidler-designed Cove tower, just below the penthouse of Qantas chief Alan Joyce.

Mr Cairns spent six of his last 14 years on the Magellan board as either chairman or CEO.

He famously swapped jobs with Mr Douglass in 2019, taking over as CEO while the latter became chairman and chief financial officer.

Mr Douglass said at the time: ‘Brett as CEO is effectively doing the jobs I didn’t enjoy doing and he’s doing them much better than I did’.

In his statement on Tuesday, Mr Douglass said: ‘I remain totally committed to the business and its future.

‘I would like to thank our clients and my outstanding colleagues for their ongoing support.

‘Alex and I would like to thank our family and friends for their incredible support and we would ask people to respect our family’s privacy moving forward’.

Magellan shares fell 6.4 pc on Tuesday to $29.10, its lowest point in two years. It has fallen almost 50 per cent since July.