In Sydney’s Covid ground zero, police have set up checkpoints and soldiers are roaming the streets to offer residents assistance and ensure compliance.

Police blockades and congregations of military officials are in stark contrast to enforcement in other areas of Sydney, where daily case numbers are substantially lower and there is less community transmission.

On the busy Hume Highway in Guildford, one of the areas of significant concern in western Sydney, locals claim police checkpoints were stopping cars trying to leave the area.

Vision of the checkpoint showed traffic banked up around the bend as two of the three lanes were blocked off, creating a bottleneck for anyone who was allowed to pass.

Minutes down the road, a driver lost control of their car and hit a power pole, causing further chaos on the roads.

In Sydney’s Covid ground zero, police have set up checkpoints and soldiers are roaming the streets to offer assistance and ensure compliance 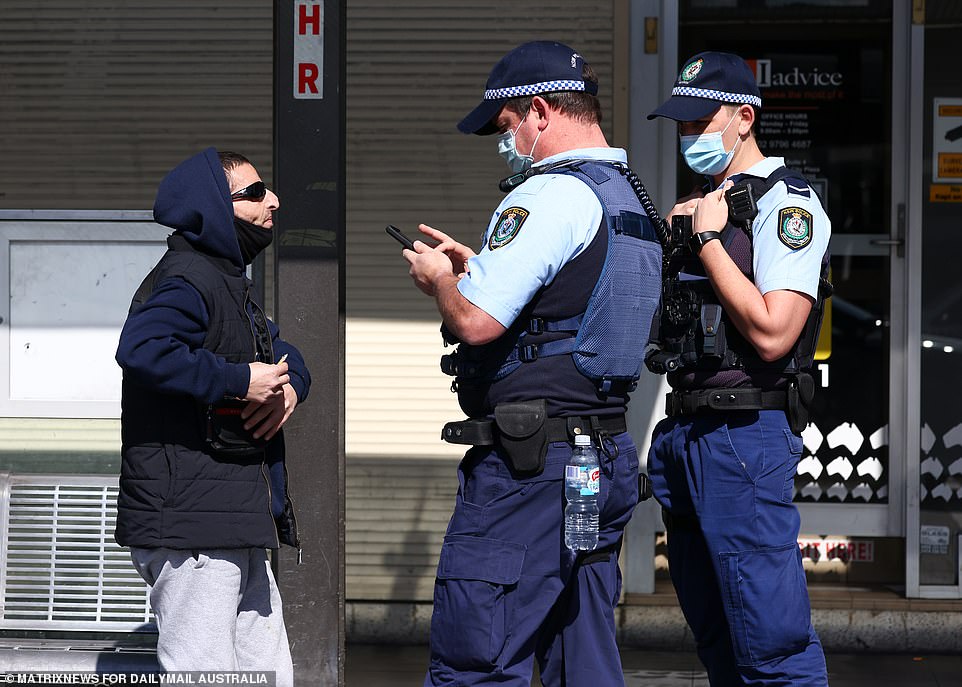 Ambulance, police and military personnel responded immediately, cordoning off the area and directing traffic away from the accident as the driver was offered medical attention.

First responders wore face masks and personal protective equipment out of an abundance of caution as they treated the motorist.

Locals reported a separate police operation on Stacey Street in nearby Bankstown.

A spokeswoman for New South Wales Police said there were several checkpoints set up throughout Sydney in a desperate attempt to keep residents in their local government areas and stem the spread of the Delta outbreak.

A weary-looking Gladys Berejiklian announced a further 633 cases and three deaths from the virus overnight, with 550 of the new infections diagnosed in western and south-western Sydney. 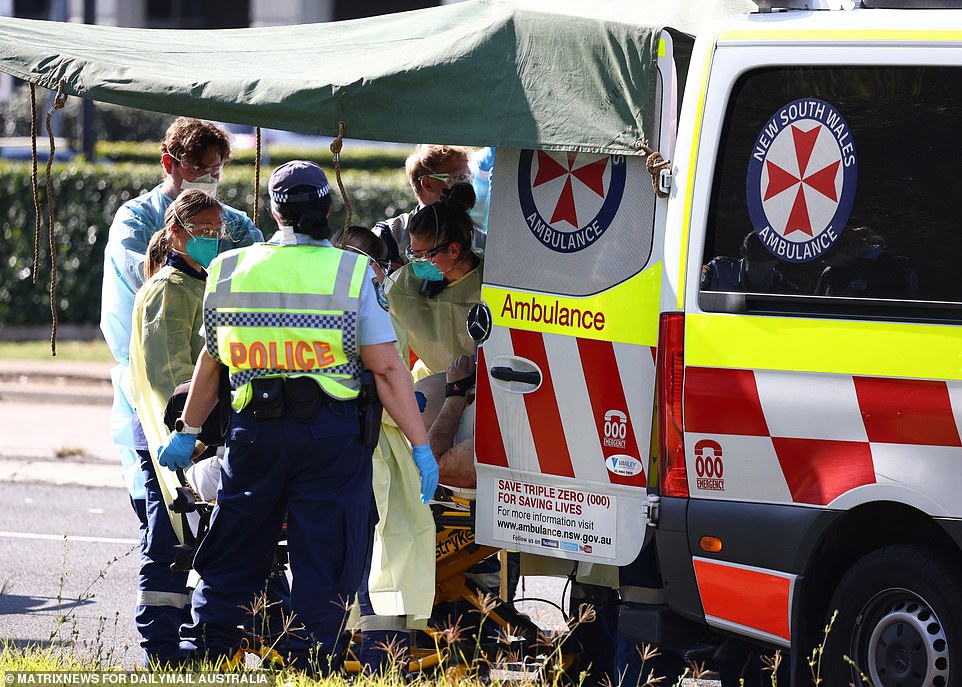 Ambulance, police and military personnel responded to a car accident metres from a Covid checkpoint, cordoning off the area and directing traffic away from the accident as the driver was offered medical attention 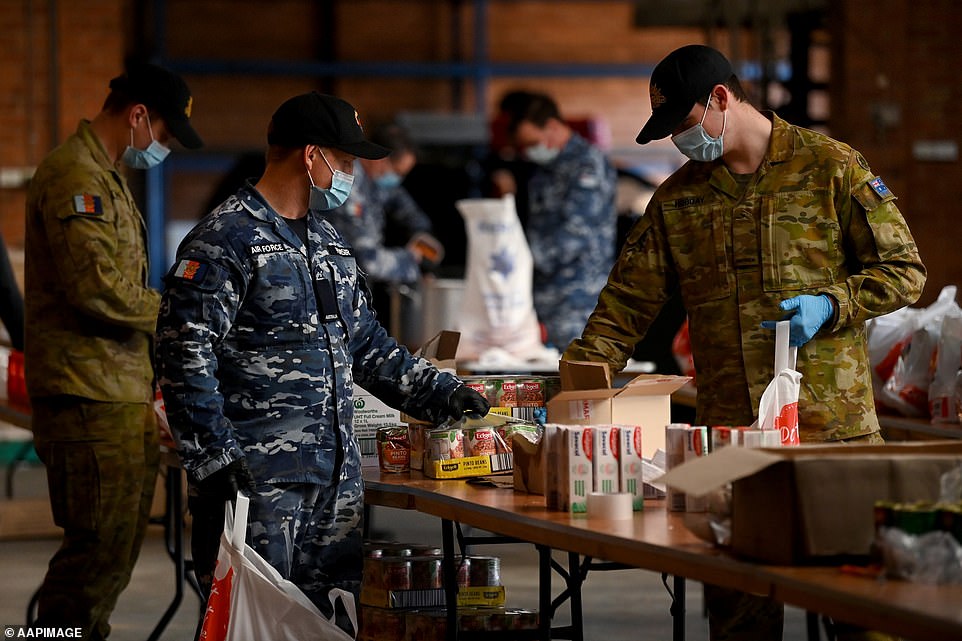 While some soldiers are roaming the near-deserted streets, others have committed to creating and delivering care packages to vulnerable residents who aren’t able to leave their homes

While some locals responded with trepidation after coming across checkpoints, others hoped officers would be successful in limiting the movements of those who have repeatedly broken the rules.

‘Anyone leaving their LGAs should be getting in trouble,’ one local said.

Others questioned how cops hoped to police the checkpoints, noting plenty of cars appeared to be waved through without speaking with any authorities.

Premier Gladys Berejiklian warned the worst was yet to come for the city after almost eight weeks spent in lockdown. 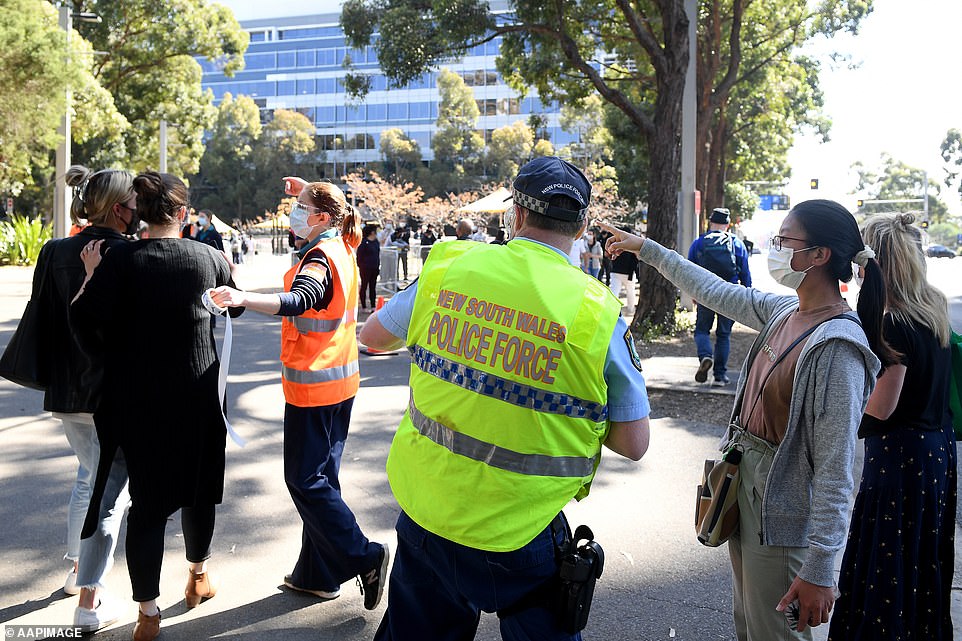 Police and soldiers are also assisting residents seeking a vaccination or Covid test, and are stationed at hospitals and clinics to direct people to where they need to be 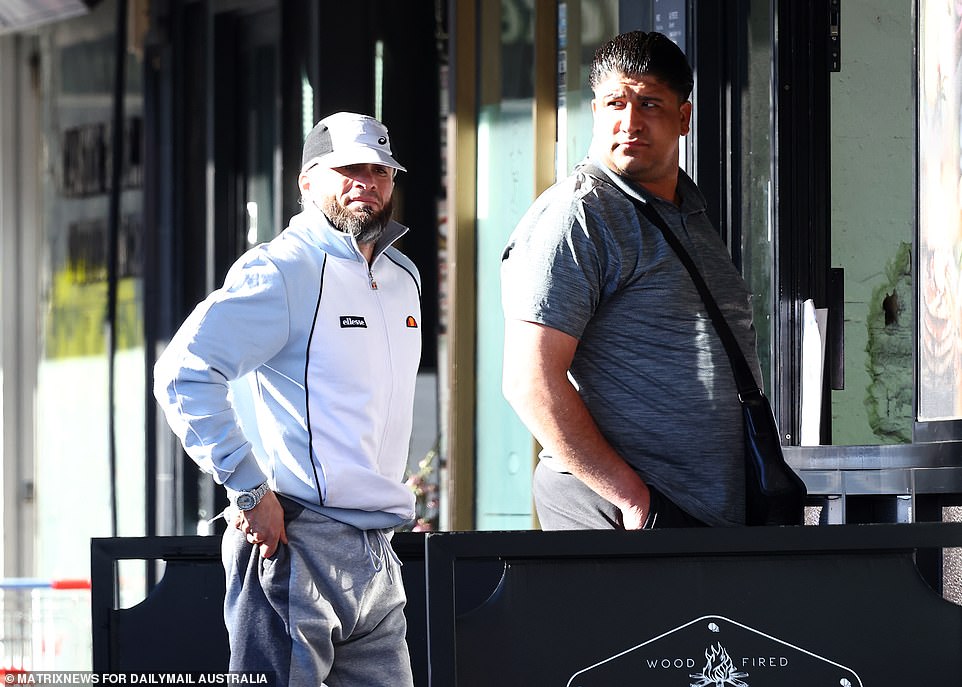 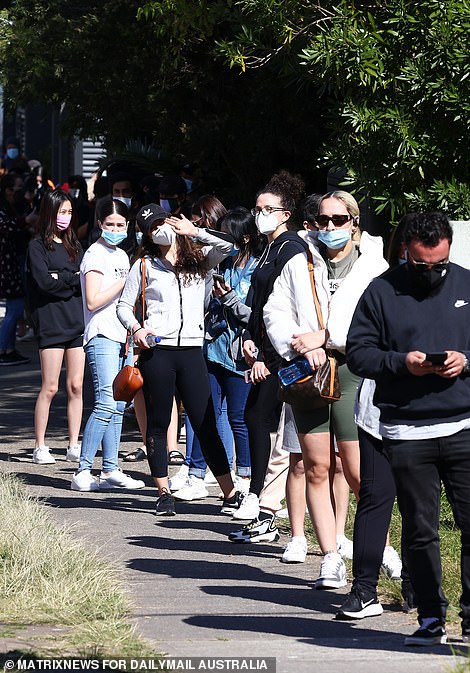 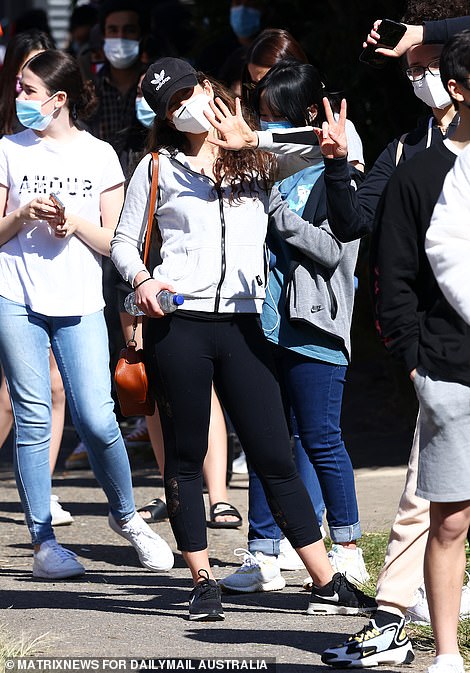 Meanwhile separate footage illustrates the sheer number of military personnel deployed to the west and southwest to assist in containing the virus and performing compliance checks.

While many are roaming the near-deserted streets, others have committed to creating and delivering care packages to vulnerable residents who aren’t able to leave their homes.

Police and soldiers are also assisting residents seeking a vaccination or Covid test, and are stationed at hospitals and clinics to direct people to where they need to be.

Premier Berejiklian reiterated officers would be on the lookout for rule breakers, who face fines upwards of $5,000 if they’re caught doing the wrong thing.

She revealed 448 residents across NSW were caught leaving home without an essential reason in the past 24 hours alone – a statistic she described as ‘heartbreaking’.

‘Can I just ask everybody to care. Don’t care about us or the broader community, but care about those closest to you,’ she said. 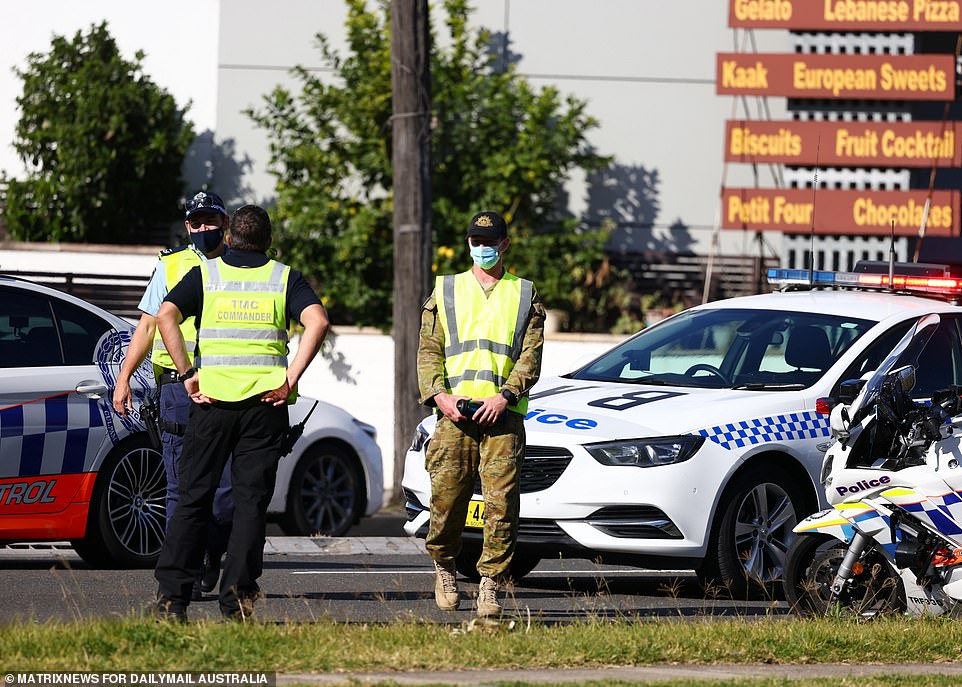 Military personnel and police are stationed at checkpoints throughout the city, with a particular focus on suburbs where Covid is spreading faster 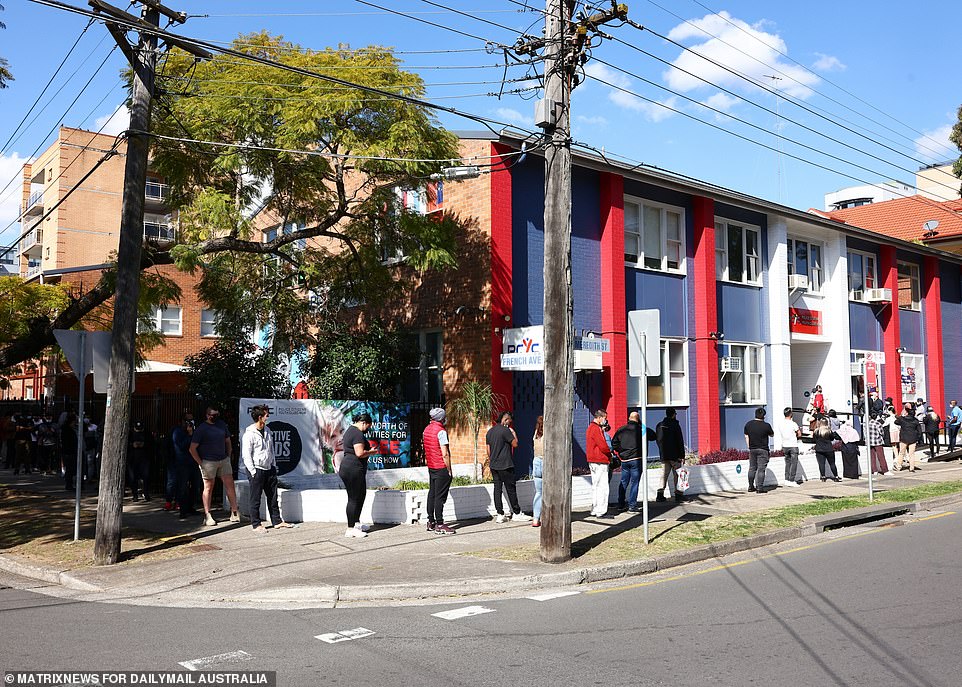 ‘Care about your family, your friends that you are causing inordinate amounts of grief.

Meanwhile the Premier is hoping a vaccination blitz inside Covid ground zero will help to reduce transmission and contribute to lowering case numbers – though immunity won’t take hold for at least another two weeks.

Those eligible for the jab must be aged between 16-39 years of age and live in Bayside, Blacktown, Burwood, Campbelltown, Canterbury-Bankstown, Cumberland, Fairfield, Georges River, Liverpool, Parramatta or Strathfield.

Residents in the locked down suburbs of the Penrith LGA are also eligible.

The blitz in areas where transmission is highest in Sydney is designed to drive down the rate of infection in those hotspots. 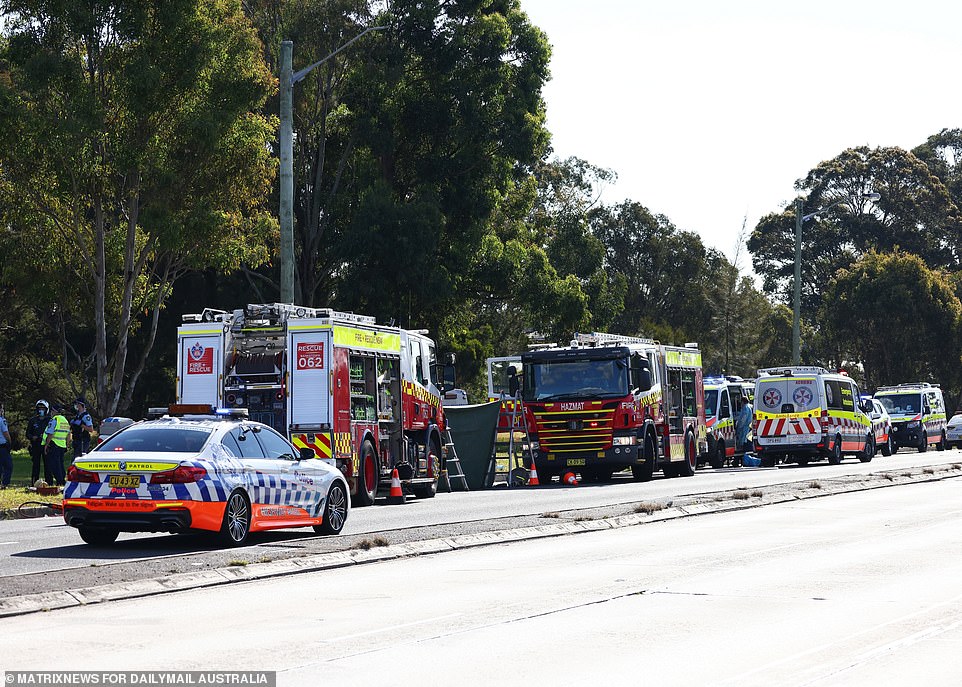 ‘We know there are several hundred thousand people in these LGAs who are unvaccinated in this age group, and this is a great opportunity for them to come forward and get their jab,’ NSW Health Deputy Secretary Susan Pearce said on Wednesday.

‘We’re doing everything we can to get doses into arms and I’d like to thank our local health districts for their mammoth effort.’

The additional doses were sent to Australia from Poland after negotiations with the Eastern European country to take surplus doses off its hands.

While 530,000 of the one million extra jabs will be fast-tracked to Sydney’s 12 LGA’s of concern, the rest will be allocated to states and territories on a per capita basis. 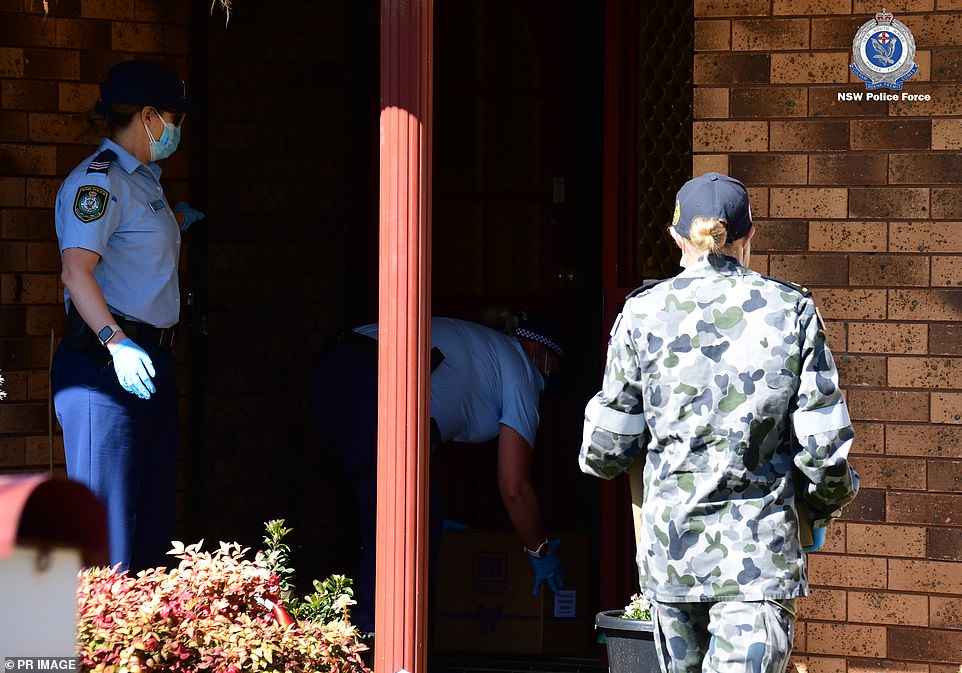