She was raised in a council house, with a visit from bailiffs among her childhood memories.

But, today, pop star Ellie Goulding will be watched by royalty as she walks down the aisle of York Minister, a £150,000 ring on her finger, and into the arms of Old Etonian Caspar Jopling.

The pair, who have been together for two years, were introduced by their mutual friend Princess Eugenie, who will attend the wedding, along with the Duke and Duchess of Cambridge and a host of celebrity guests including singer Ed Sheeran.

The reception will be held at the Grade I- listed stately home Castle Howard in North Yorkshire and, after a vegan feast, guests will spend the night in VIP camping pods in the 1,000-acre grounds.

The overall bill for the big day is said to comfortably reach six figures, with £20,000 splurged on flowers alone. It’s the stuff of fairy tales.

So how did CinderEllie get her happy ending? Alison Boshoff reports…

The Brit Award-winner was born Elena Jane Goulding on December 30, 1986. She and her three siblings were raised in a council house in Lyonshall, Herefordshire, while their mum, Tracey, worked in a supermarket to make ends meet.

Ellie’s father, Arthur, had walked out when she was five — something she has described as ‘very difficult’. She disliked her stepfather, a tattooed lorry driver.

‘I didn’t have the best childhood,’ she has said. ‘We grew up in the smallest house. Moth-eaten, flea-ridden furniture with holes in it that was handed down from my nana.’ 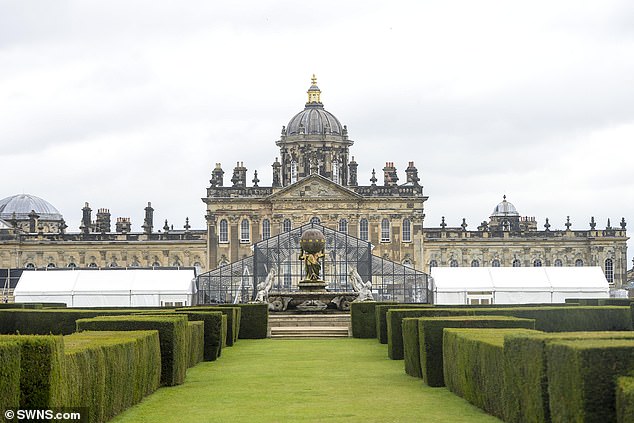 The reception will be held at the Grade I- listed stately home Castle Howard in North Yorkshire (pictured above) and, after a vegan feast, guests will spend the night in VIP camping pods in the 1,000-acre grounds 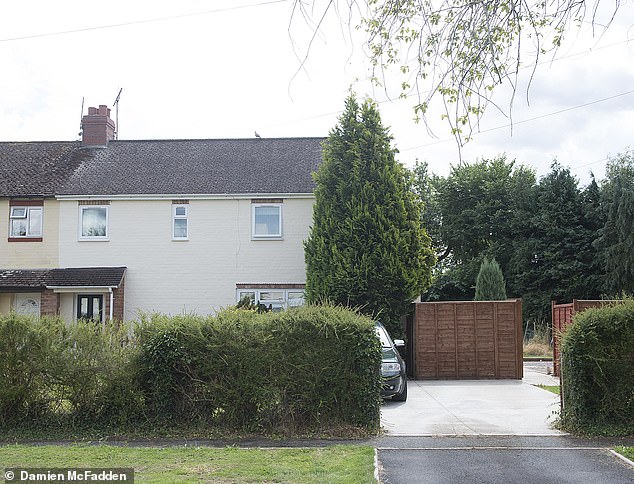 Pictured: The modest former home of Ellie Goulding in Herefordshire as she marries an old Etonian

The 32-year-old recalled a visit from the bailiffs, who took away the family television one afternoon in a row over unpaid bills.

‘I had a lot of friends who didn’t live in the same situation as me and I knew my only way out was through education,’ she said.

She won a place at the University of Kent and, while a student, her talent was spotted at an open mic night.

Jamie Lillywhite, son of producer Steve Lillywhite and the late singer Kirsty MacColl, became her manager and she dropped out of her theatre degree.

Her husky vocals proved successful on both sides of the Atlantic — her 2010 debut album Lights was a big hit (as was 2015 record Delirium). 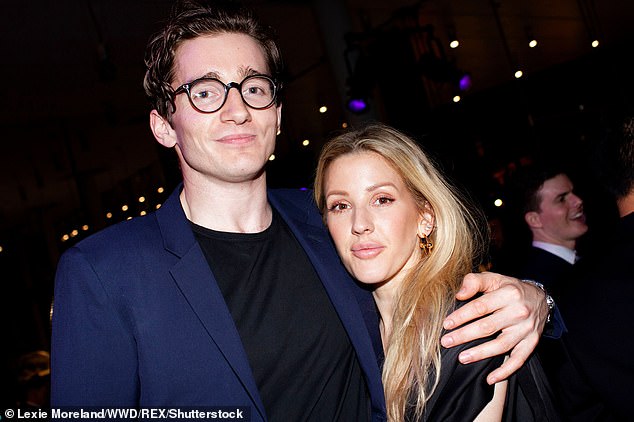 The pair, who have been together for two years, were introduced by their mutual friend Princess Eugenie, who will attend the wedding, along with the Duke and Duchess of Cambridge and a host of celebrity guests including singer Ed Sheeran

More attention came when she was asked to perform at the wedding reception of Prince William and Kate Middleton in 2011 — they asked her to sing her cover version of the Elton John classic Your Song, a hit as a result of the 2010 John Lewis Christmas advert.

Before meeting Caspar, Ellie had a long relationship with Radio 1 DJ Greg James, followed by a six-month fling with DJ and producer Skrillex while they were working together in Los Angeles.

There were also romances with One Direction singer Niall Horan and McFly star Dougie Poynter, plus a rumoured dalliance with Ed Sheeran. 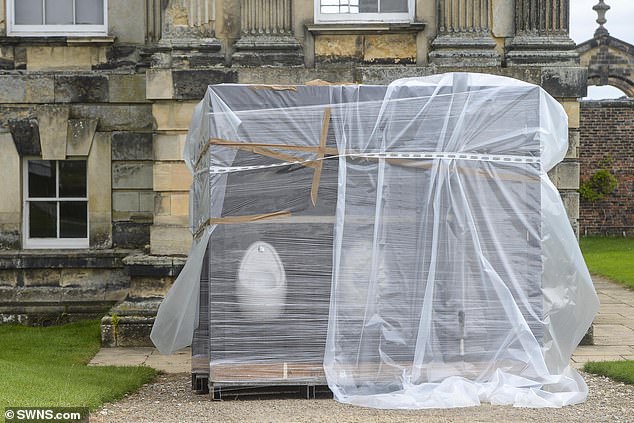 Event staff are pictured preparing the reception grounds at Castle Howard, Yorkshire. The overall bill for the big day is said to comfortably reach six figures, with £20,000 splurged on flowers alone. It’s the stuff of fairy tales

Despite her success, Ellie has admitted suffering with social anxiety and, in the early days of fame, she needed hospital treatment for panic attacks.

Her mother affectionately refers to her as a ‘stress head’, but Ellie has said that showbusiness makes her more confident.

While her father’s absence was a source of pain for many years, the two reconciled in 2016 and he came to watch her perform.

He will walk her down the aisle today, with Ellie declaring: ‘We’ve forgotten the past.’

Caspar Jopling, 27, was educated at Eton and studied history of art and architecture at Harvard University in the U.S.

He was working as an art dealer at Sotheby’s New York when he met Ellie, but the couple moved back to the UK in preparation for married life, and Caspar will be starting a master’s at Oxford University in the autumn.

Before meeting Caspar, Ellie had a long relationship with Radio 1 DJ Greg James, followed by a six-month fling with DJ and producer Skrillex while they were working together in Los Angeles

In contrast to his fiancee’s upbringing, Caspar is the son of The Honourable Nicholas Jopling, who comes from a family of farmers in the Yorkshire Dales.

His grandfather is Tory grandee Baron Michael Jopling, 88, who served as minister of agriculture, fisheries and food under Margaret Thatcher and was her government’s Chief Whip.

In his Diaries, the late Tory MP Tory Alan Clark claimed that Jopling once said of his Cabinet colleague Michael Heseltine: ‘The trouble with Michael is that he had to buy all his furniture.’

A talented sportsman, Caspar represented Team GB in rowing at the Youth Olympics in 2010 and also rowed at Harvard.

His uncle is the famous art dealer Jay Jopling, who lives in New York and was married to film director Sam Taylor-Wood (now Taylor-Johnson).

The pair are said to have been introduced by Princess Eugenie, who knew Caspar through the art world and Ellie socially.

Having bonded over their mutual love of jigsaw puzzles and quiet nights in, they became engaged within 16 months of meeting.

Ellie has said that her decision to take a step back from work during the early days of their romance probably helped the relationship last the course.

‘But with Caspar, it is different. I’ve had this time to put my everything into it. 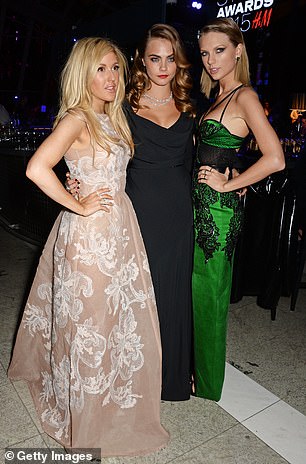 Ellie has a pukka social circle, and has picked 300 friends and family to come to the reception. She is pictured with Ellie, Cara and Taylor

‘He doesn’t like the spotlight: in fact, he hates it. He is incredibly wise, very rational and super-smart. He’s 26 going on 50! His wisdom has helped me through a lot.

‘We’ve never argued. We laugh all the time. He constantly surprises me.’

While the majority of their romance was conducted in New York, they are now living in Ellie’s West London flat.

‘As much as I love New York, I find it too much of a sensory overload for a Hereford girl,’ she said.

Caspar proposed a year ago when he and Ellie were at home in New York doing a jigsaw puzzle.

Ellie recalled: ‘I lost the power of speech for about ten minutes. I couldn’t say anything because I was so shocked.

‘He didn’t know whether I was saying yes or no. I was obviously going to say yes, but I couldn’t form any words. It was nice because it was a normal night. We were doing a puzzle, which is kind of nerdy, but we like puzzles.’

Caspar wrote on Instagram: ‘I get to spend the rest of my life with this truly extraordinary and beautiful, beautiful person . . . I look forward to a lifetime of exploring the world together, crying with laughter at stupid jokes, chatting into the early hours about art, music, the world and the future. I love you, Elena.’

Their engagement was announced in a traditional manner in The Times newspaper: ‘Mr C. W. F. Jopling and Miss E. J. Goulding. The engagement is announced between Caspar, son of The Hon Nicholas Jopling of Yorkshire and Mrs Jayne Warde-Aldam of Yorkshire, and Elena, daughter of Mr Arthur Goulding of Hertfordshire and Mrs Tracey Sumner of West Midlands.’ 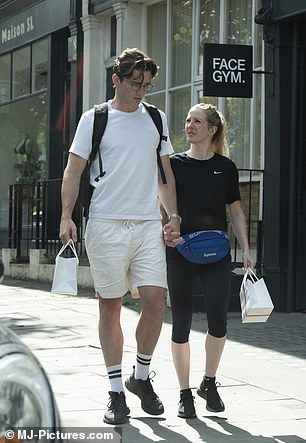 The pair are said to have been introduced by Princess Eugenie, who knew Caspar through the art world and Ellie socially. The pair are pictured leaving a London gym hand in hand

Ellie has a pukka social circle, and has picked 300 friends and family to come to the reception.

She is close to actress Cressida Bonas, an old flame of Prince Harry (who, it is rumoured, also once dated Ellie), and to Princesses Beatrice and Eugenie and their mother, Sarah, Duchess of York.

All are expected to attend, as is the model and actress Cara Delevingne, who is part of their set, too.

She is also chummy with fashion designer Misha Nonoo (Harry and Meghan’s matchmaker) and her oil heir fiance Mikey Hess — they have holidayed together.

Pals in the pop world include singers Taylor Swift and Katy Perry, as well as British stars Rita Ora and Ed Sheeran, who are both on the wedding guest list.

The budget for flowers is thought to be a very generous £20,000, and Ellie is said to have hired Sue Barnes of Lavender Green, who did the natural arrangements at Pippa Middleton’s 2017 wedding.

Masterminding the affair is uppercrust party planner Sarah Haywood — whose average wedding costs a whopping £1.2 million. Ellie said: ‘I’ve got someone helping me, but Caspar is being more “bridezilla” than me.’

Ellie’s pal Stella McCartney — who designed Meghan Markle’s ‘second’ wedding dress — is thought to be doing the honours for her bridal gown.

But Ellie is close to designer Misha Nonoo and has previously worn one of her bespoke evening gowns. 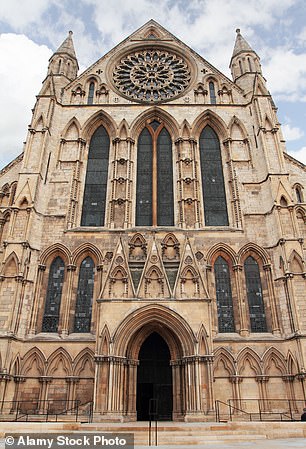 Those who wish to wed at York Minster must obtain a special marriage licence, which will be granted only if they have a ‘present and demonstrable connection’ with the cathedral

The 7th-century York Minster is one of the most important cathedrals in Europe. Among its treasures is the Great East Window, dating from 1408, which is the largest expanse of medieval stained glass in the world.

It is the Minster’s policy not to disclose details of private family occasions, but sources close to Ellie confirm that she is to be married there.

Those who wish to wed at York Minster (pictured right) must obtain a special marriage licence, which will be granted only if they have a ‘present and demonstrable connection’ with the cathedral.

As Caspar’s grandfather is Lord Lieutenant of Yorkshire, this likely wasn’t a problem.

After the ceremony, the newlyweds and their guests will head 15 miles north for the lavish reception. Synonymous with the iconic 1981 TV adaptation of Brideshead Revisited, there are few more romantic settings than Castle Howard.

Set in a glorious 8,800-acre estate in North Yorkshire, it is one of the most beautiful stately homes in the UK.

Although Castle Howard declined to comment on the wedding, its website confirms that the house and grounds are closed to the public today for a ‘private event’, and this week has seen the construction of a glass house with a stage and two marquees.

Castle Howard costs a minimum of £15,000 to hire for a wedding, and that’s before you factor in catering, marquees, lighting, alcohol and entertainment.

Starlight Design — a London event design and production company — was this week putting in place the glass house. A similar style of glass house for Pippa Middleton’s wedding cost more than £100,000.

There will be a VIP tent for guests to stay in and golf buggies to drive them around. And, like the bride, the food will be vegan.

Caspar proposed with a round diamond set on a pavé band, said to be worth around £150,000.

Ellie has said that her ring is ‘over a century old’, and she loves the idea of it having a history. 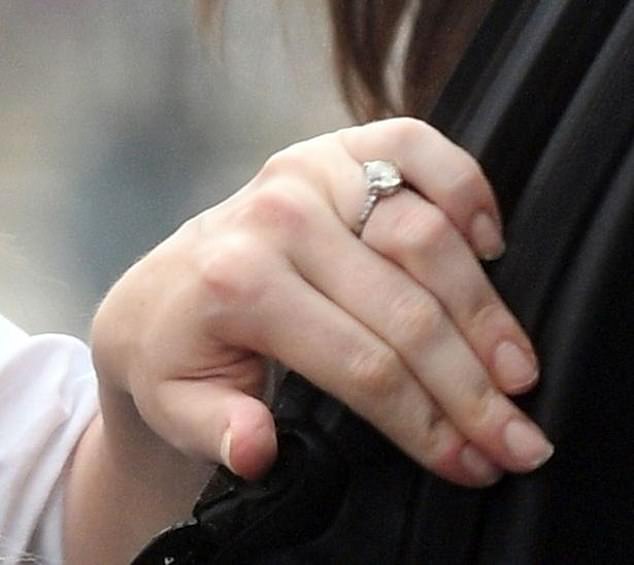