As Hurricane Irma rips its way up Florida’s Gulf coast, the state has hastily expanded its shelter system to more than 400 locations to protect vulnerable residents.

Some 127,000 people were crammed into shelters across Florida as Irma made landfall on Sunday, after officials ordered millions of residents to evacuate ahead of the storm.

All Florida’s state offices, schools, colleges and universities were ordered to close from Friday until Monday to free up space for evacuation shelters and staging, with other shelters springing up in churches and community centers.

After the mad rush for shelter on Friday and Saturday, when many evacuees were forced to endure long lines and visit multiple shelters to find one with space, on Sunday there was little left to do but hunker down.

Evacuees watch the weather from inside a shelter as Hurricane Irma approaches in Naples, Florida on Sunday 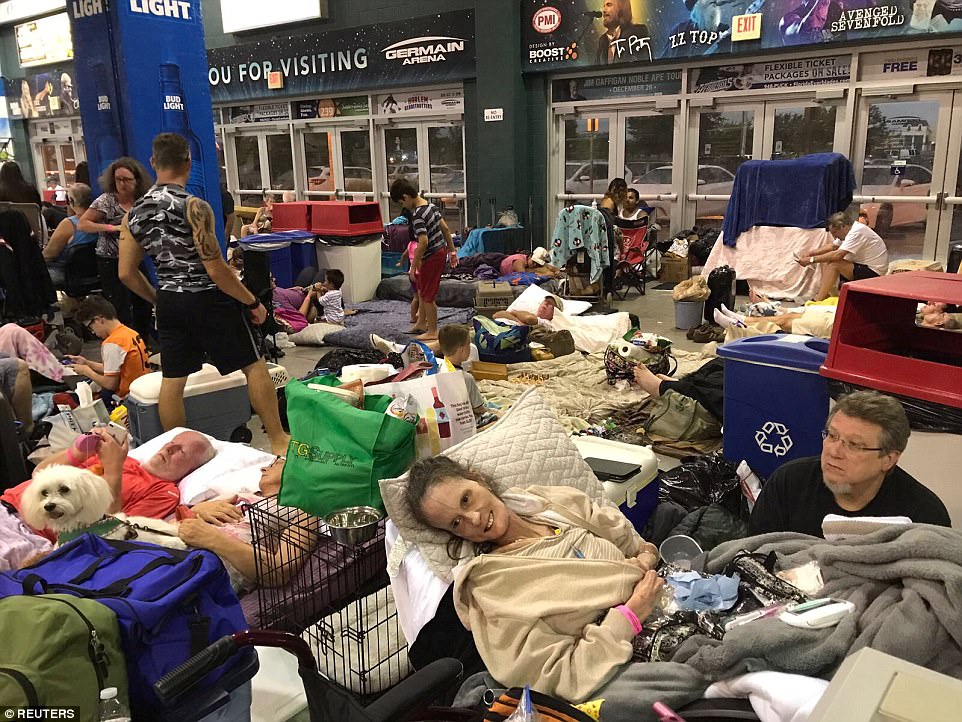 Sheryl and Rick Estes (right) take shelter from Hurricane Irma inside the Germain Arena in Estero, Florida on Friday night 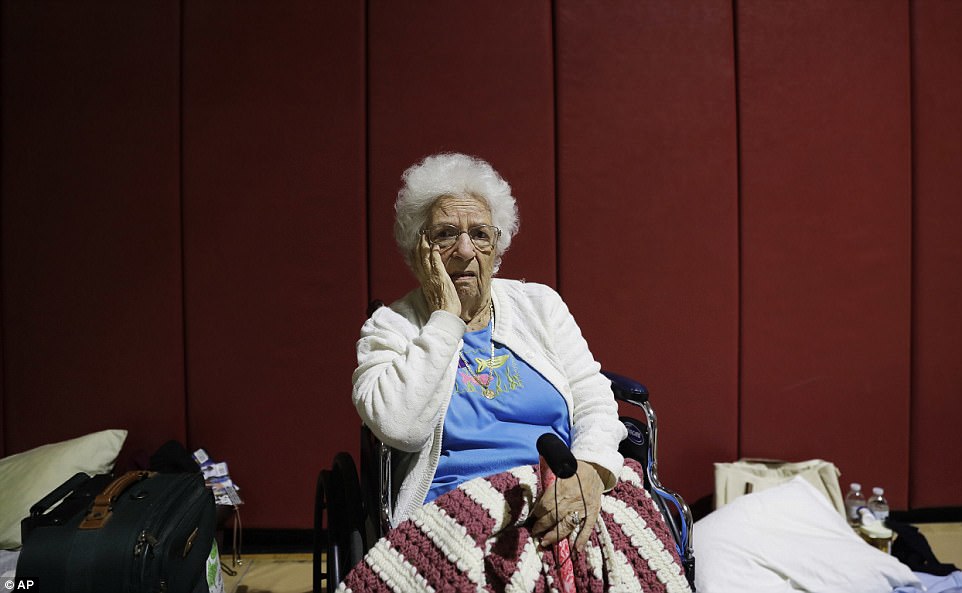 Mary Della Ratta, 94, sits in shelter after evacuating her home with the help of police. ‘I’m afraid of what’s going to happen. I don’t know what I’ll find when I go home,’ said Della Ratta whose husband passed away ten years ago. ‘I have nobody’ 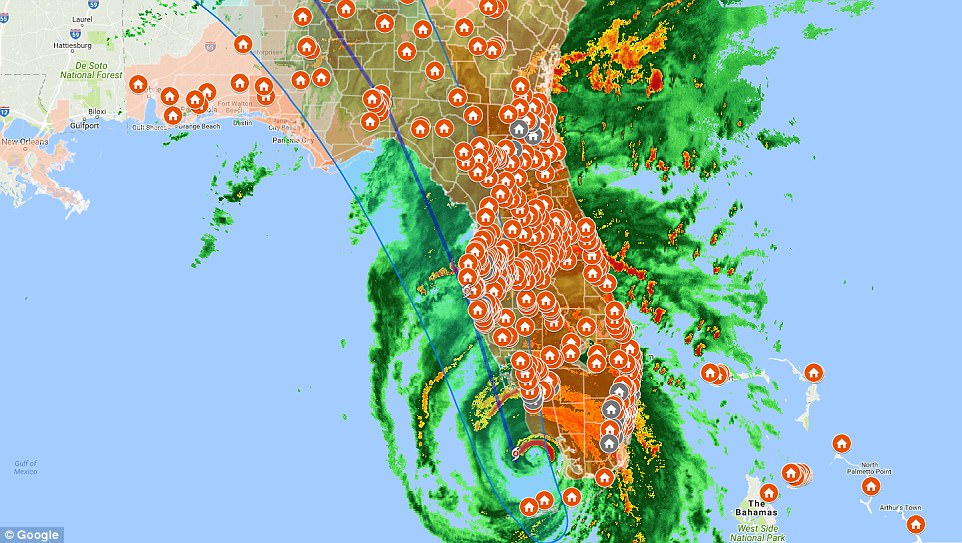 Some 127,000 people were crammed into shelters across Florida as Irma made landfall on Sunday. This map shows the locations of the state’s more than 400 shelters and the storm track as of Sunday afternoon

Though overcrowding meant some shelters could only offer chairs overnight, rather than cots, reports from the state’s shelters were mostly of cooperation and fears of what would be left when the storm clouds cleared.

In Naples, Mary Della Ratta, 94, sat in her wheelchair in a shelter on Sunday after police helped her evacuate her home on Saturday night.

‘I’m afraid of what’s going to happen. I don’t know what I’ll find when I go home,’ said Della Ratta, whose husband passed away ten years ago. ‘I have nobody. I’m all alone in this world.

In Collier County to the east of Naples, more than 800 evacuees packed into Pinecrest Elementary School.

Mark Tesar, 46, and his wife Hilda went to four shelters with their two kids ages 5 and 11, before finding space at Pinecrest.

‘With the family, I don’t ever plan to stay in the house,’ Mark Tesar, who oversees an 800-acre tomato farm in Immokalee, told the Naples Daily News.

‘I don’t want them in harms way. Plus there’s strength in numbers, with EMS and police here.’

Naples residents Carol and Ben told the newspaper that they ended up at the Pinecrest shelter after waiting until Friday afternoon to evacuate, and finding gas hard to come by. ‘We knew we were late. It was our fault,’ said Carol. 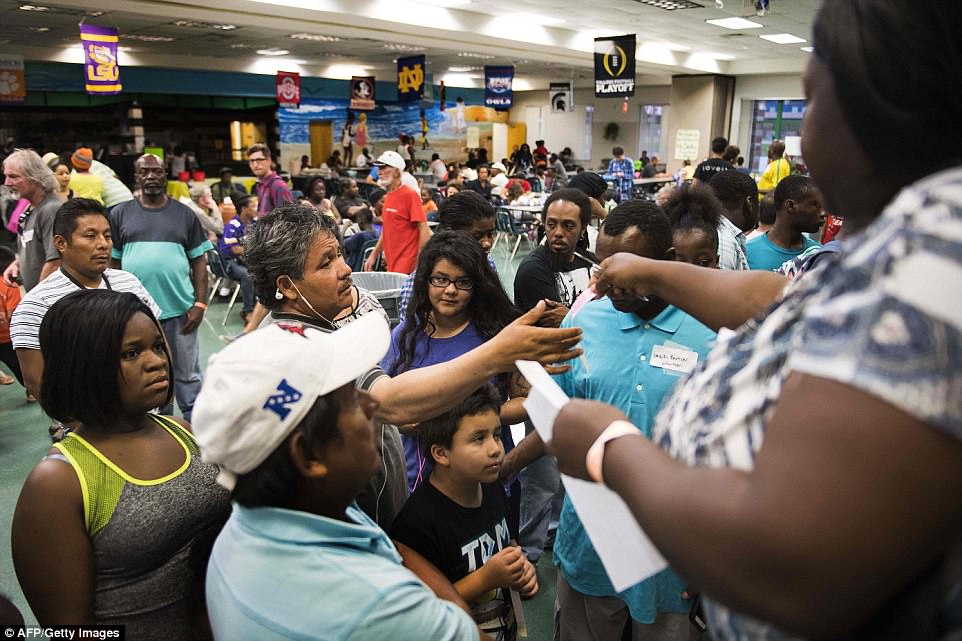 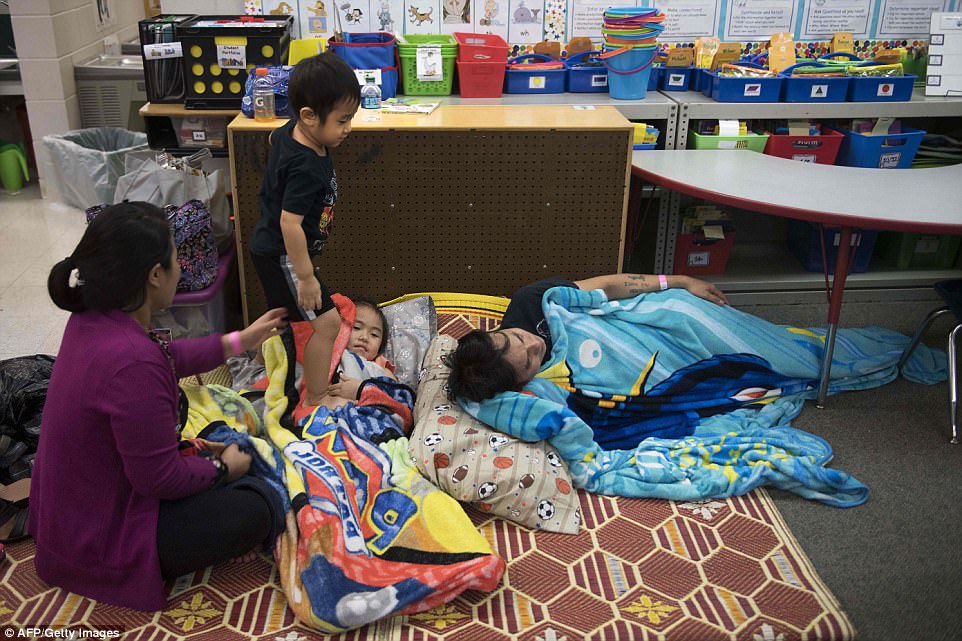 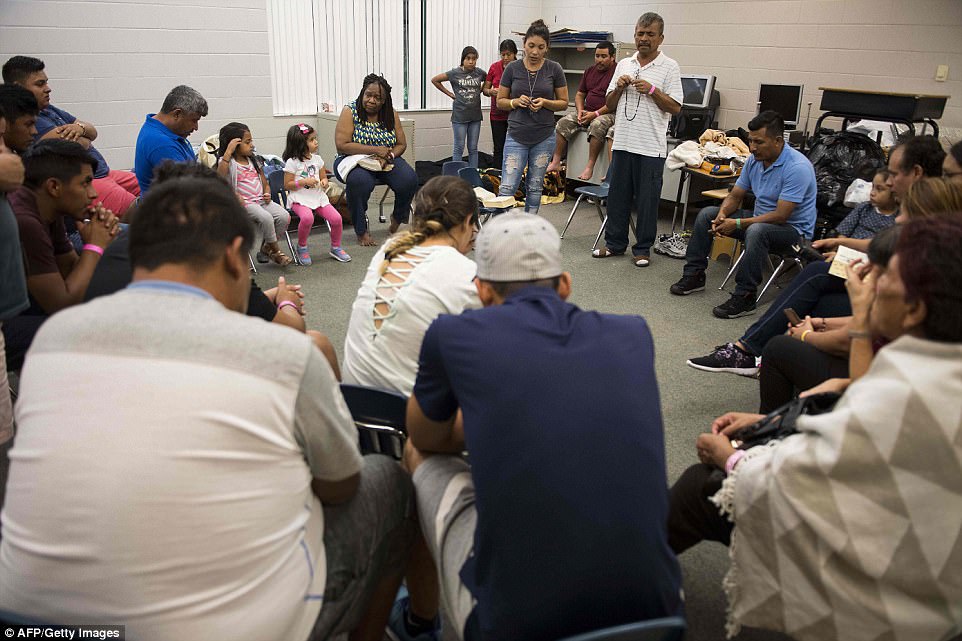 A group of people form a prayer circle in a classroom at a shelter within the Pizzo Elementary School in Tampa, Florida 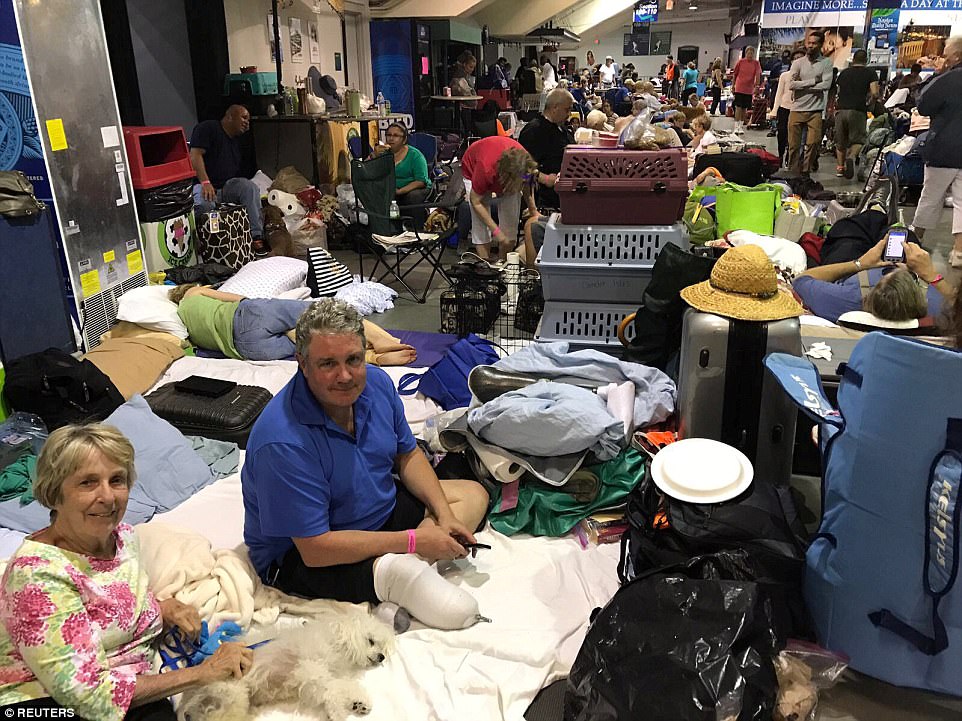 Gretchen Summer, 79, and her son, Dave Payson, 52, take shelter from Hurricane Irma inside the Germain Arena in Estero 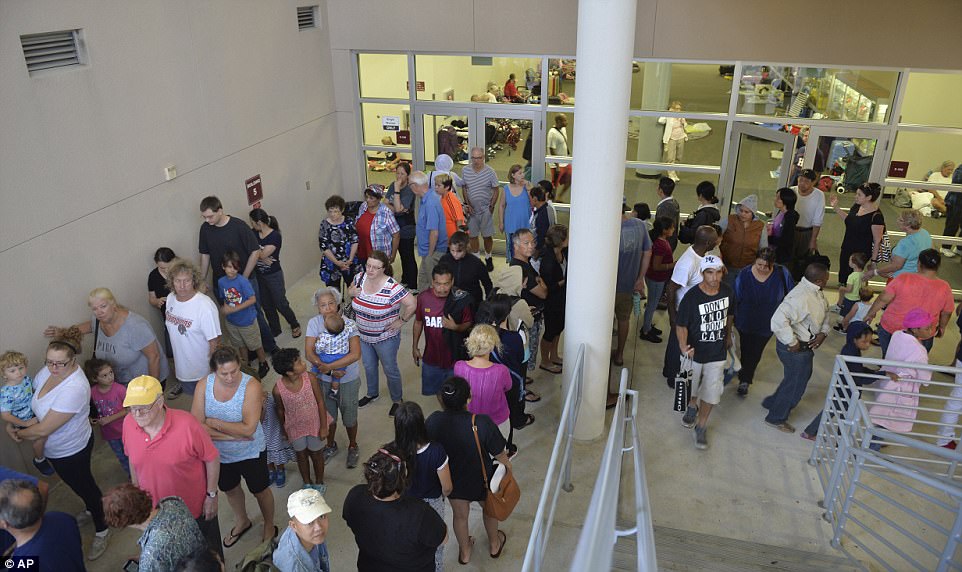 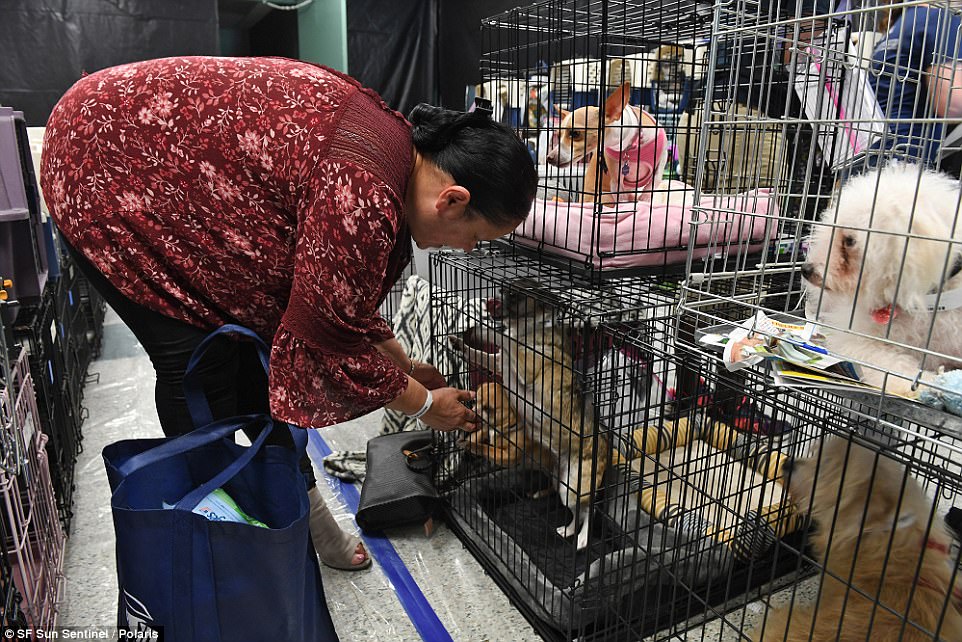 On Florida’s eastern coast, in Stuart, 539 people stayed at the shelter at J.D. Parker Elementary School on Saturday night.

‘I had some anxieties,’ mother Teresa Hopkins, who stayed at the shelter with her 8-year-old daughter Jasmine, told the Treasure Coast Palm.

‘I’m not used to sleeping with a lot of people around,’ Hopkins said.

On Saturday night, dinner at the Parker Elementary shelter was turkey and mashed potatoes.

‘Spanish people like me, that’s not something we eat a lot. But again, I’m not complaining,’ Pedro Zapeta, there with his 15-year-old son and 12-year-old daughter, told the newspaper. 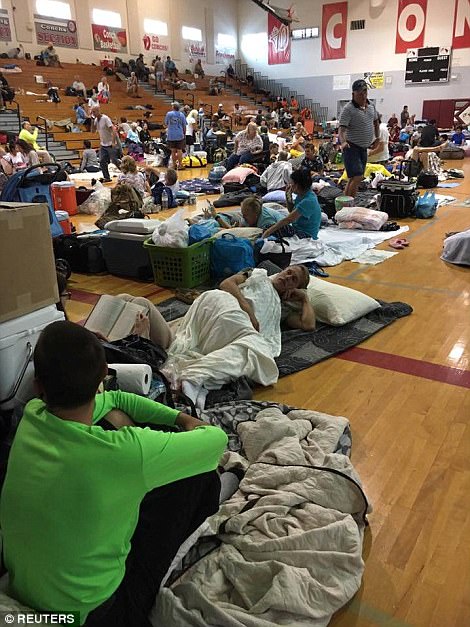 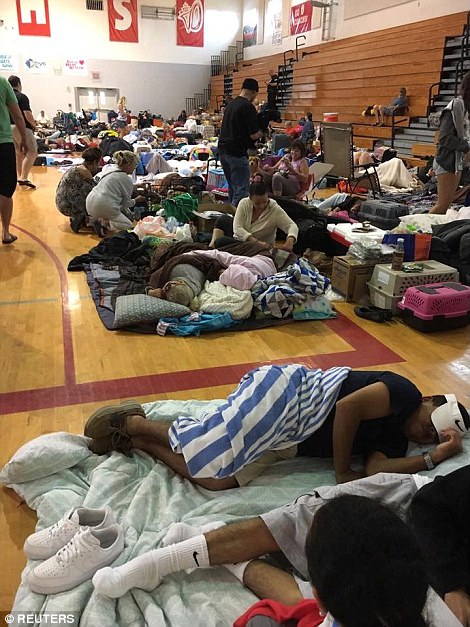 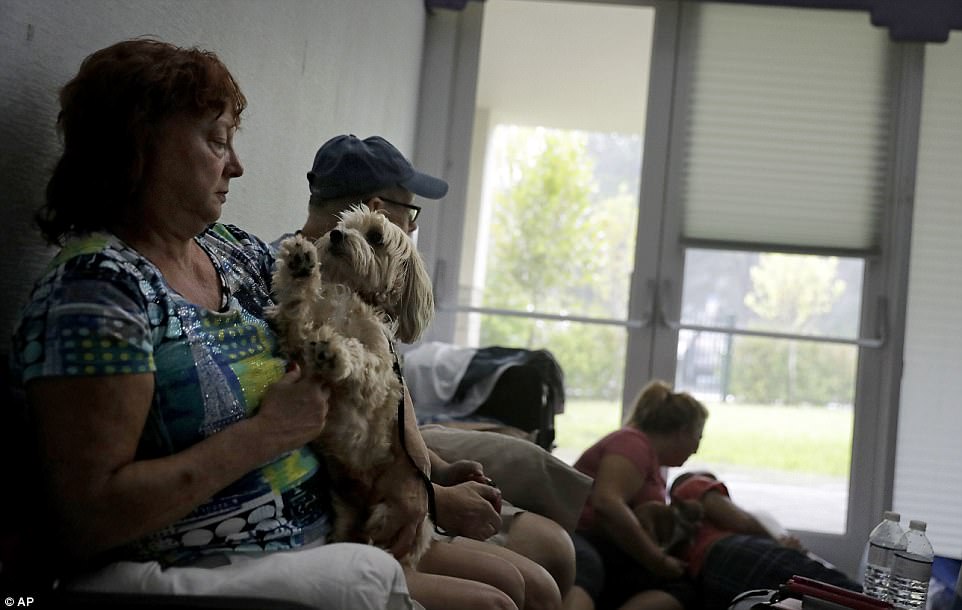 Andrew Patterson, left, sits with her dog Seamus as they ride out Hurricane Irma in a shelter in Naples, Florida on Sunday 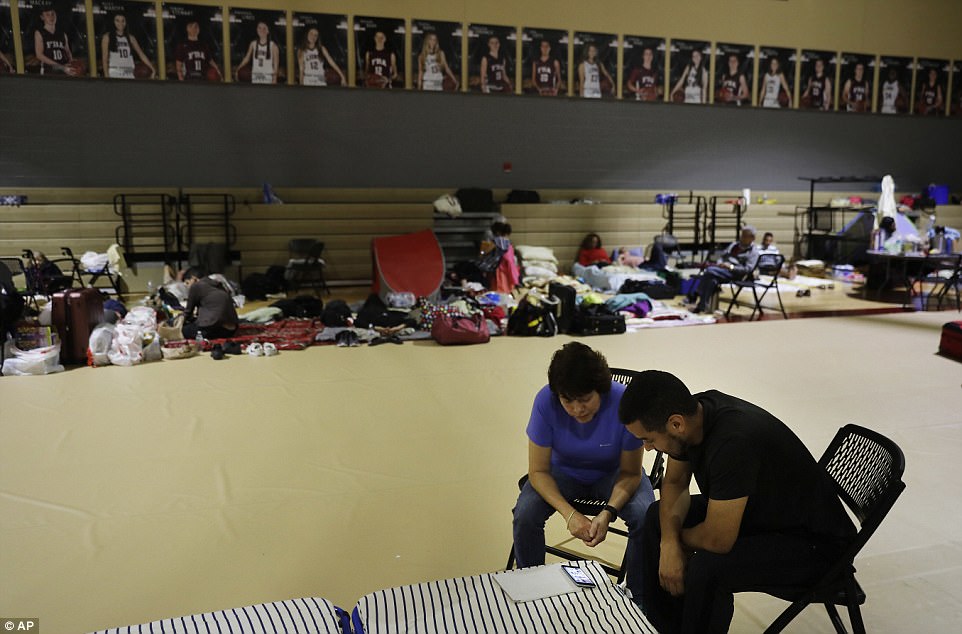 Iris Belen, left, and Mouad El jamil watch weather updates on their phone after evacuating from their home to a Naples shelter

In a shelter in Pembroke Pines, near Miami, lifelong Floridian Jacqueline Cobb told DailyMail.com she had originally found a hotel to stay in, but that the lack of impact windows and a backup generator meant it had to shut down.

The shelter, in a school, was the only one she could find for people with special needs, like her friend Stephen Herndon who has problems with his autonomic nervous system that can cause severe nosebleeds, fainting and overheating.

Cobb and her friend are safe in her shelter, but a shocking text message left her worried about her home and neighbors.

‘I received a code red tornado alert,’ she said. ‘I have a two-story townhouse and there is a three-and-a-half-ton air conditioner on the rooftop. I’m on a lake in the first house, so If the tornado rips that off, it will open up my house and let water into the building,’ she said.

That tornado warning expired at 8am Sunday, but Cobb won’t find out what’s happened to her home for some time.

‘We’re now on lockdown and we’re not clear when we might be able to leave the building,’ she said.