Inside Germany’s miserable World Cup ending: A ‘s*** mood’ and SILENCE in the dressing room

The aftermath of Germany’s miserable exit from the World Cup in Qatar has been laid bare in excruciating detail by German newspaper Bild.

From the moment the final whistle was blown four minutes before midnight at the Al Bayt Stadium, until their bus was loaded for exit on Friday morning, it is grim reading for fans of Hansi Flick’s side, who finished third in their group behind Japan and Spain. It is the second consecutive World Cup where Germany have failed to make the knockout stages.

Just over ten minutes after the game had concluded, after saying goodbye to fans in the ground, there was ‘dead silence’ in the dressing room, as German colleagues had no idea what to say to each other.

Their shoes were packed in plastic bags. With no future game for kit managers to prepare for, each player was responsible for their own equipment for the first time since their arrival.

Hansi Flick, the Germany manager, has come under scrutiny after the country’s early exit 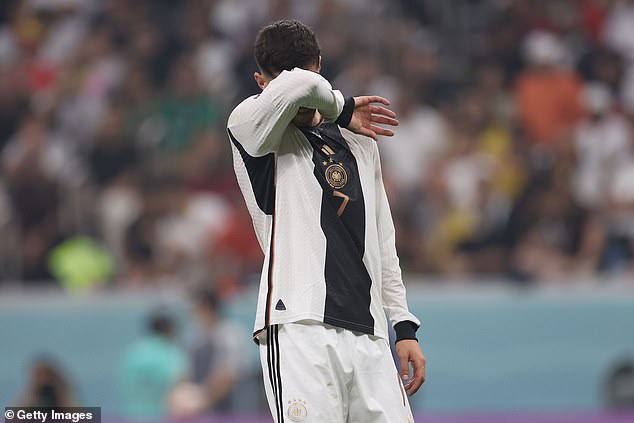 Players took part in their mandatory media briefings post-match, although it was 45 minutes after the match, not immediately after the final whistle.

Flick admitted: ‘It’s our own fault’, but despite intense pressure on his job after their early exit, he has vocal support from some of his players. Antonio Rudiger said: ‘I hope that he stays.’

Kai Havertz won the Budweiser Man of the Match trophy in Germany’s 4-2 win, but the celebratory snapshot looked more like a mugshot. He later told the press: ‘It could also be a horror film’. 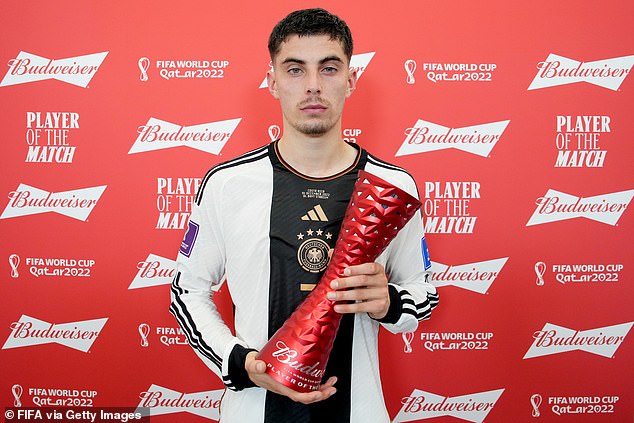 Havertz was awarded Man of the Match in their 4-2 win, but was visibly unexcited by the trophy

Midfielder Ilkay Gundogan left his future in the national team open, saying: ‘I haven’t thought about it yet, I just wanted to concentrate on the tournament. I don’t know, the frustration prevails.’ Niklas Sule avoided questions about his future by staying quiet and eating an apple.

Thomas Muller hinted at international retirement in the TV mixed zone, noting he would discuss it with his wife and manager Flick. He did not confirm it in press afterwards – but did have to curtail his comments due to his fragile emotional state.

Joshua Kimmich told TV cameras: ‘For me, this is the most difficult day of my career. The second time to be eliminated at a World Cup.’ It didn’t sound like history made it any easier to accept. 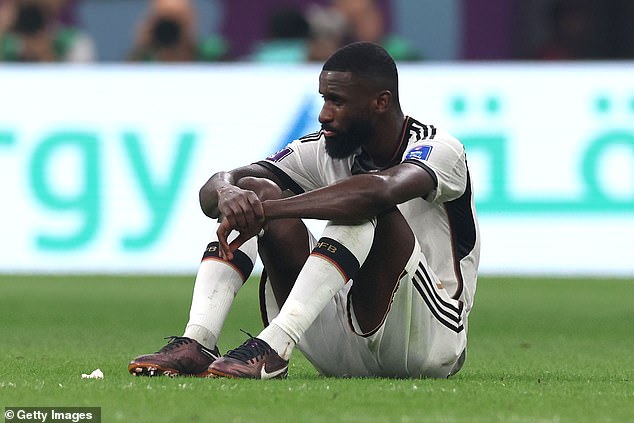 A devastated Serge Gnabry revealed: ‘The mood in the cabin was s**t, you can imagine that. A lot of silence and a lot of disappointment, a lot of anger. It’s more anger at ourselves, we came here with a purpose and it’s our own fault if we don’t win the games.’

Germany’s fate was arguably sealed by losing their opening game to group winners Japan, and while Sunday’s draw against Spain offered a glimmer of hope, it was not enough as they fell short on goal difference.

Buses left the Al Bayt Stadium at 1.45am local time, less than two hours after their elimination, and they drove for an hour to the Zulal Resort. The players arrived about 40 minutes behind transport for the players’ wives and girlfriends, who were waiting for their other halves at the resort. 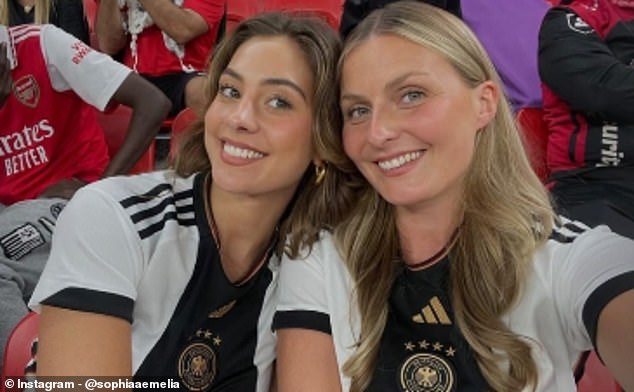 The trainers, supervisors and team held a late-night meal, but the atmosphere is described as being ‘like at a funeral…’

At 9.30am, the team bus was being loaded for departure. Their flight out of Qatar back to Frankfurt is set to leave five hours later. It won’t be a party then either. 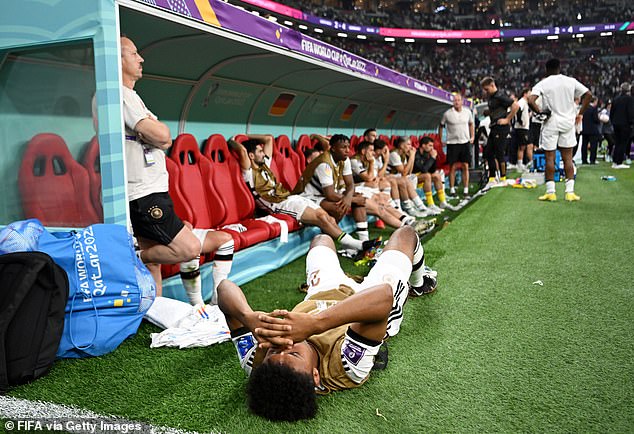