From the outside it looked like a nondescript tent. But inside, it was a different story altogether.

Canberra’s Groovin The Moo festival was allowed to conduct pill testing for revellers for the second year running this weekend, potentially saving the lives as seven after the drugs they were going to take were found to have dodgy drugs cut with potentially fatal chemicals.

It sounds like the kind of place where tensions run high as young men and women dice with death as they learn whether or not they have killer pills.

But the vibe inside is calm, with groups of friends coming inside together to get their drugs examined – and they are even given lollies and condoms as they wait.

A reveller named Jordie was outspoken regarding her support of pill testing, and made a fashion statement to support her beliefs 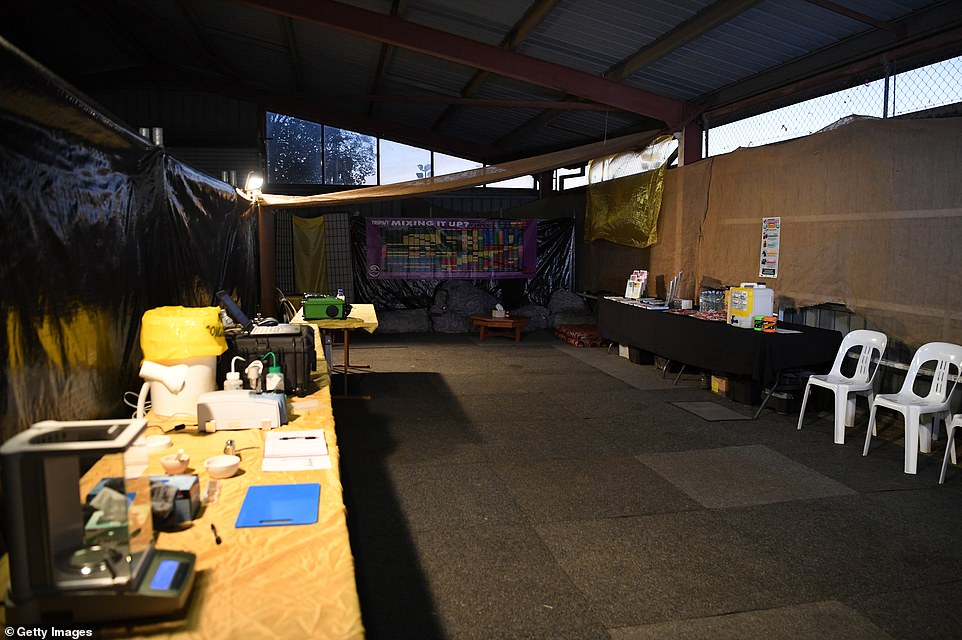 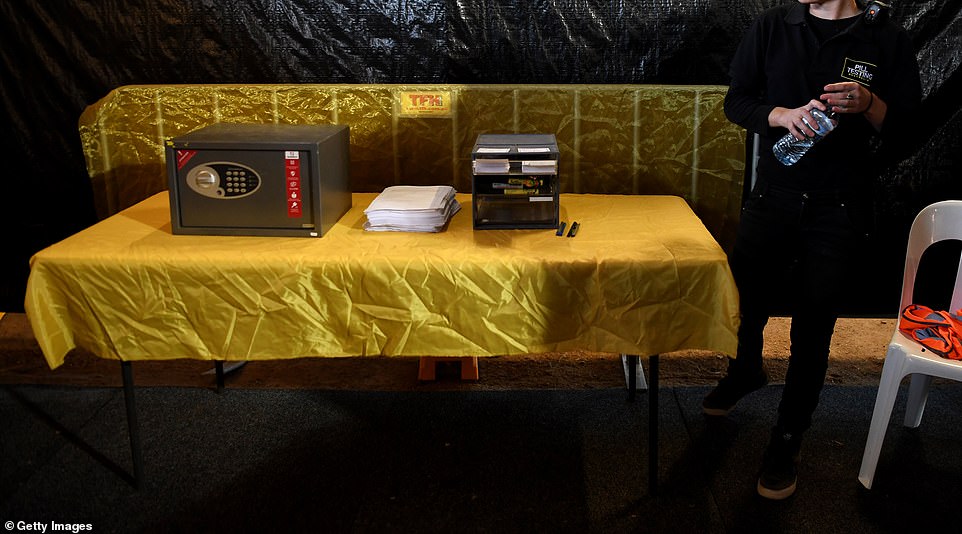 Patrons who wanted to participate in the trial were asked to place their phones in a safe, and sign a waiver before proceeding

HOW DID PILL TESTING WORK AT GROOVIN THE MOO?

Step 2: Sign a waiver and lock all recording devices or technology in safe

Step 3: Answer a series of instructions asked by a doctor – including what you think is in your pills

Step 4: Sacrifice pills to be weighed and measured

Step 5: Offer a sample of the drug, from a small amount up to half

Step 6: Examiners put the sample through sophisticated technology which matches the chemicals in the sample to a list of 30,000 products in the database

Step 7:  Results were almost instantaneous. Take the results to a doctor, who goes through information regarding the particular drug you had sampled

Step 8: Speak with a councilor and volunteer regarding any questions or queries

While police did search revellers as they entered the festival, they steered well clear of the testing facility and didn’t target people on the way out.

Taking a different approach to the heavy-handed nature of New South Wales Police seemed to work, with scores of people going inside the tent throughout the day.

The facility wasn’t easy to find at first as it wasn’t signposted and was wedged between two Red Frog facilities and the medical tent.

But as the festival warmed up, festival goers dressed in colourful and racy outfits lined up for up to 10 minutes to get into the tent.

In all, 234 participants tested 171 drug samples. While MDMA was the most prominent substance identified, volunteers said other drugs were also tested throughout the day, including cocaine, ketamine and LSD.

Seven dangerous substances containing the potentially deadly synthetic stimulant N-Ethylpentylone were identified, with all patrons involved telling staff and volunteers they purchased the drugs under the impression it was MDMA.

All seven patrons chose to use the amnesty bin to get rid of the drugs when they learned the truth – a step in the right direction, according to volunteers in the tent.

Inside the tent, volunteers celebrated the small successes, and saw the seven pills that were thrown out as examples of pill testing not only working, but saving lives.

But multiple festival goers throughout the day complained about the lack of signage indicating where the tent could be found.

Instead, Red Frog volunteers at the farther tent were able to offer assistance, and pointed willing patrons in the right direction, back toward the entrance of the venue and through a blacked-out tarp-covered fence. 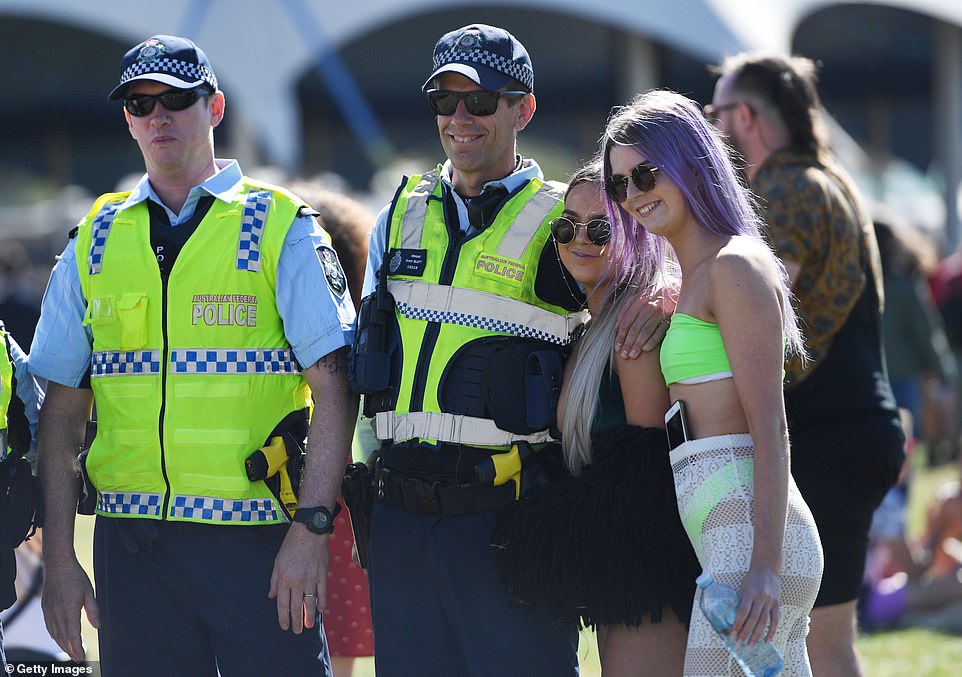 Police patrolled the grounds of Canberra’s Groovin The Moo festival in droves, but the vibe of the day was more at ease than festivals of late, with patrons comforted by the presence of pill testing and volunteers who placed public safety above all else 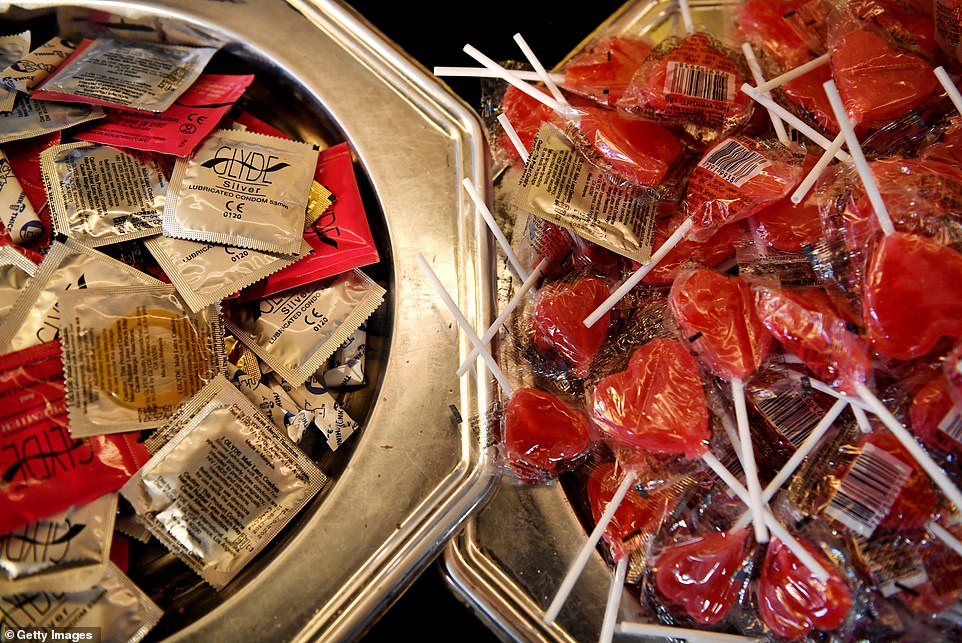 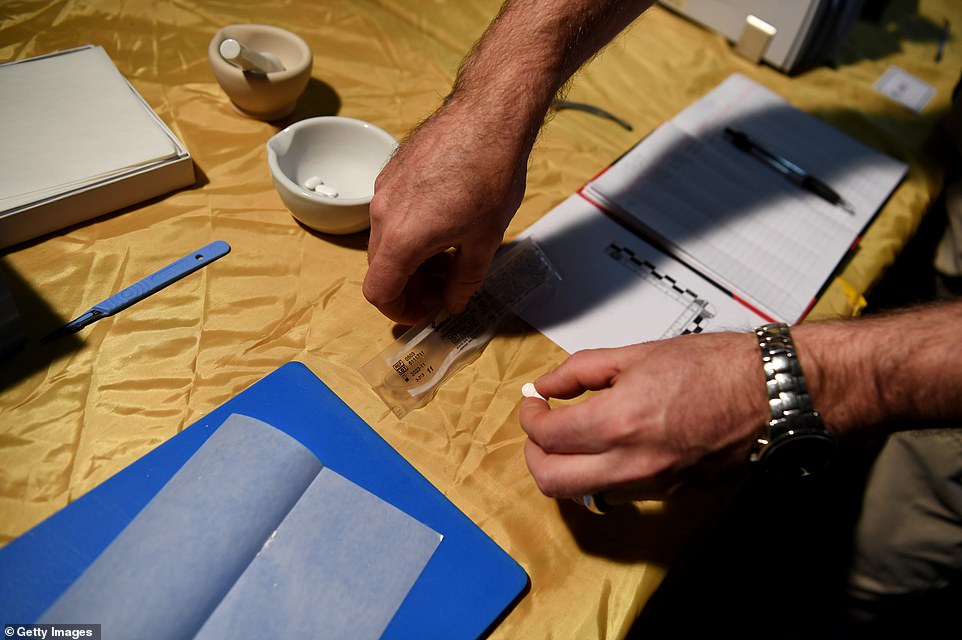 Samples of the drugs were measured and weighed before the testing continued. All results were recorded for future reference

Once rounding the corner, they were greeted by a cheerful woman in an all black uniform. She was guarding the door to the facility and chatting with a couple of groups who had already found their way in.

A 20-year-old woman named Sophie holding four capsules containing what she believed to be MDMA in her hand also chatted to everybody in the line, asking the volunteer a host of questions regarding drug taking and the procedure once inside the tent.

She was particularly concerned with whether the process would be the same as last year, and told those gathered her pills from 2018 had tested positive for MDMA.

The volunteer answered all of Sophie’s questions and provided about 12 people in the line water bottles, lollipops and red frog lollies. 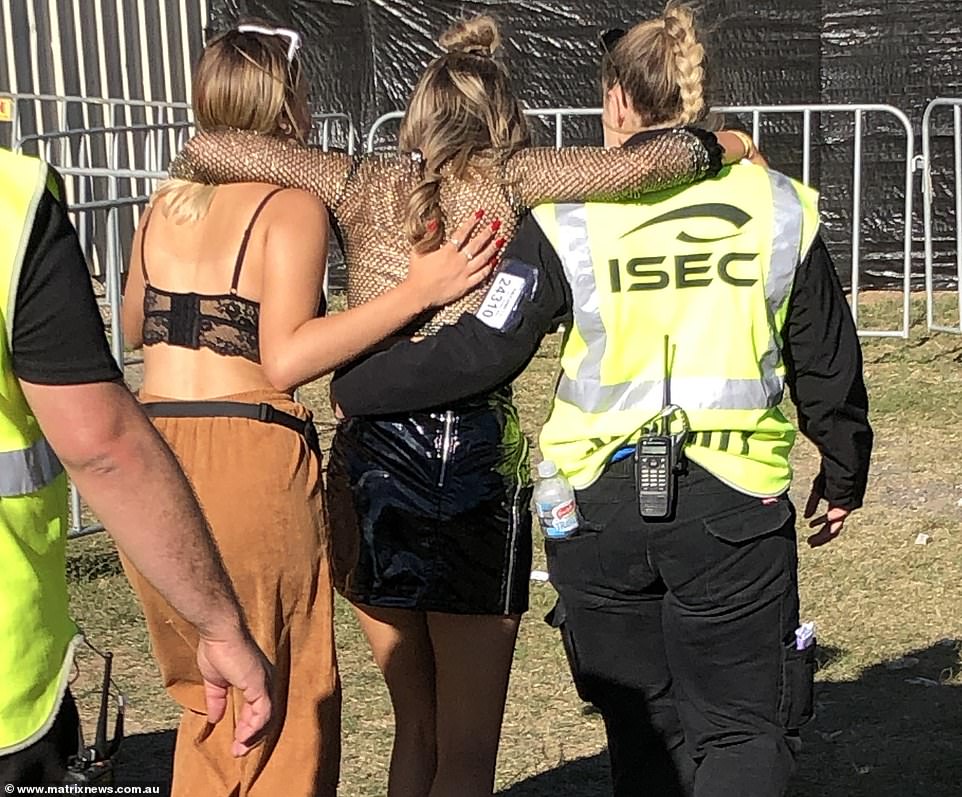 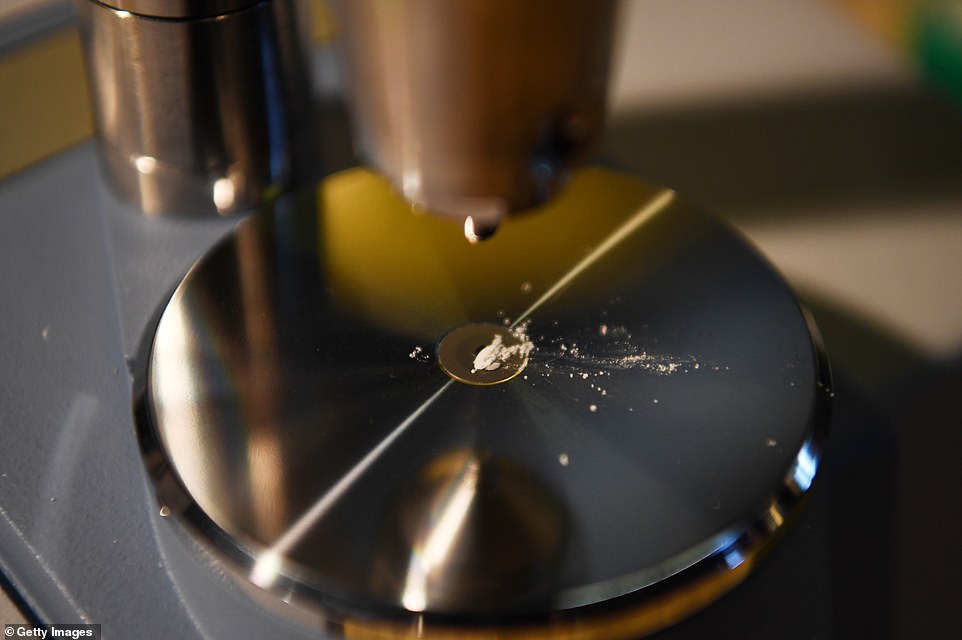 A sample of the substance was scraped off or poured out of the pill, capsule or bag and onto a sophisticated machine

She made it very clear the area was a safe space, where anonymity was required of all patrons and safety was the primary goal.

A few people in the line expressed their concerns about police waiting for them on their way out of the facility. But she explained police at the festival had acknowledged the importance of patrons getting home safe, and promised they wouldn’t be targeting people leaving the tent.

‘While our message first and foremost is not to take illicit substances at all, ACT Policing is committed to harm minimisation initiatives such as pill testing and we are actively engaged with the ACT government and other stakeholders,’ an ACT police spokesman said.

She was right. Police appeared to avoid approaching the perimeters of the facility, and they didn’t appear to have to enter the tent once during the day.

Some revellers in the line said they were shocked to see it was ‘almost as if police didn’t know the tent was here’. 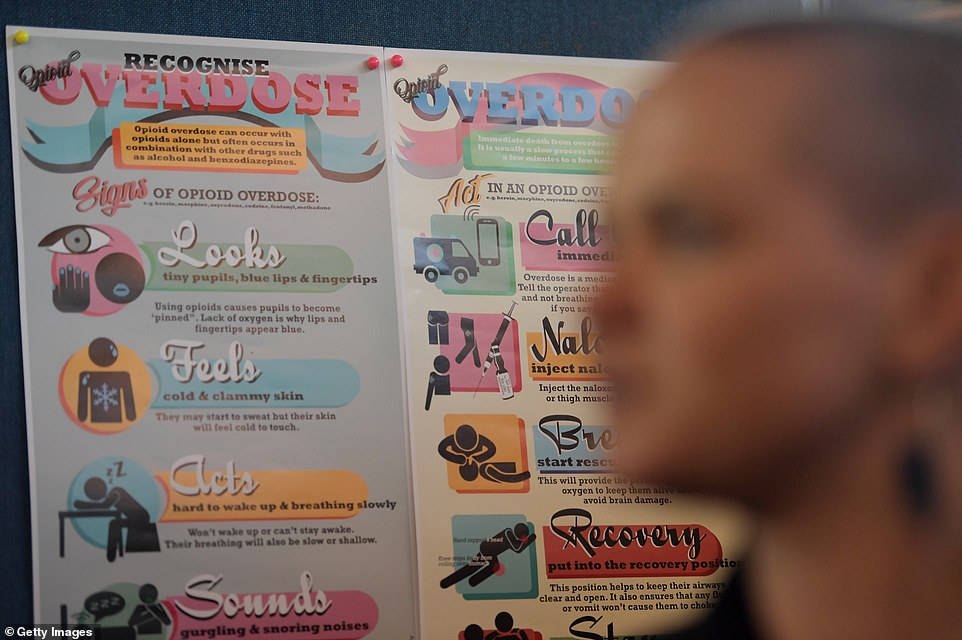 The tent was decked out with information regarding the safe use of drugs and overdose information. Revellers could also take home pamphlets 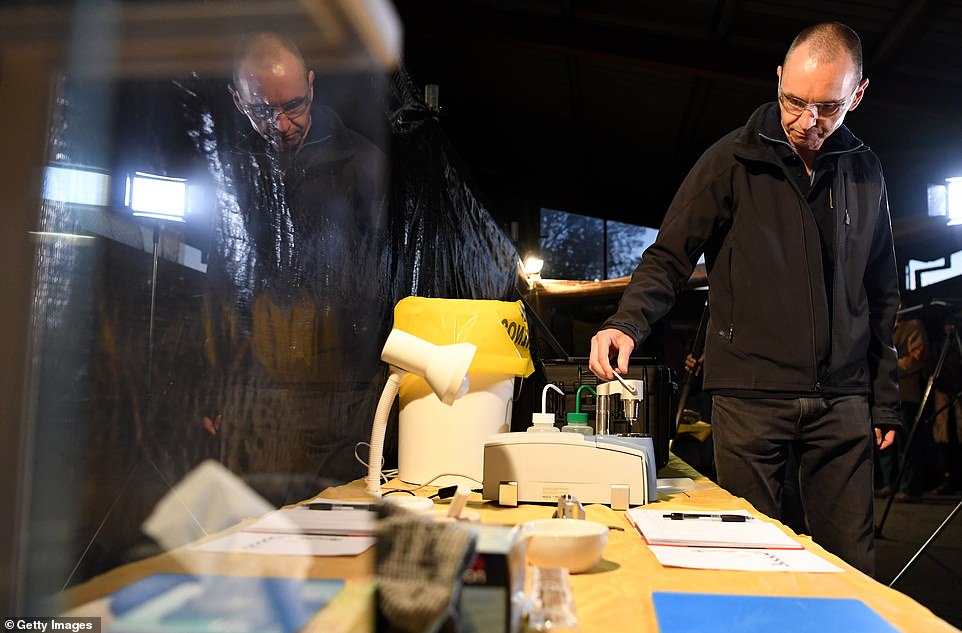 Doctors and chemists then took one of Sophie’s capsules and unscrewed the two parts. They asked how much she was willing to sacrifice for the sample, and what she thought the drug was

The volunteer then began the process of explaining why phones needed to be confiscated once inside. Again, she reiterated the importance of anonymity and the need for a safe space.

People were also only able to enter the tent with the friendship group they arrived with.

By about 3pm, there was a decent backlog to test pills and speak with a professional. Patrons were waiting outside for about 10 minutes, chatting to the volunteer.

She emphasised the importance of hydration and gave everybody tips to check their friend’s tongues throughout the day. If they were white, she said to encourage them to drink more water.

One of the festival goers, a young man named Campbell said he witnessed somebody die at FOMO festival.

He said the lack of shade and free water facilities at the facility may have contributed to the girl’s death, and again reiterated his support of pill testing. 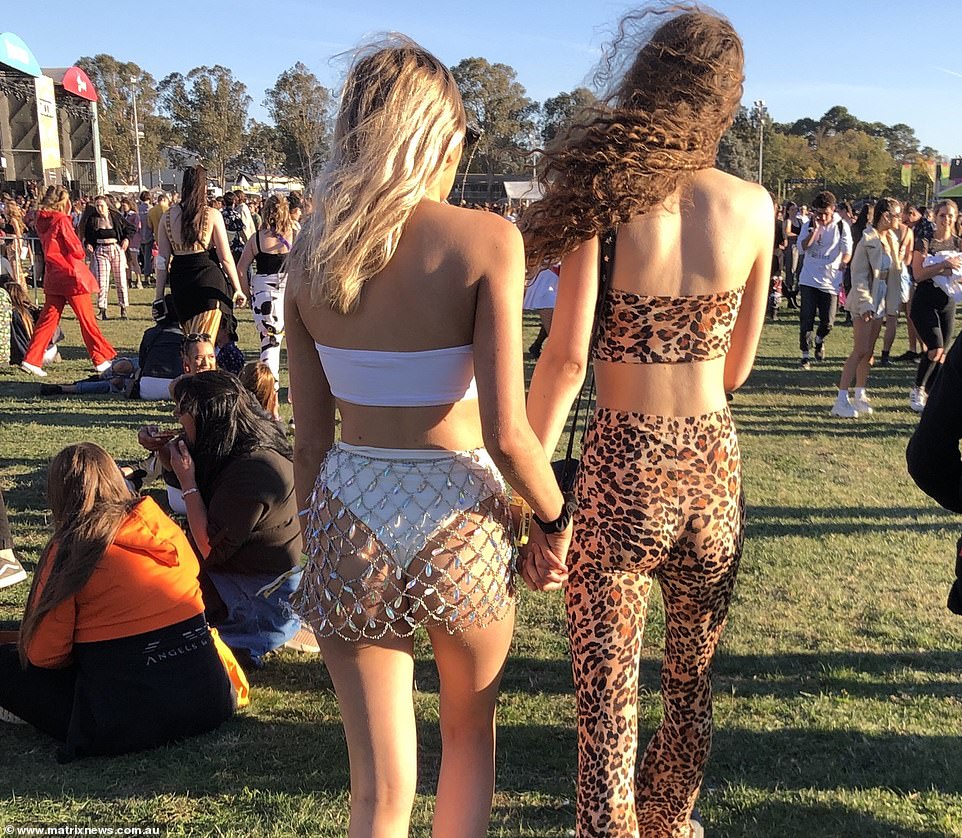 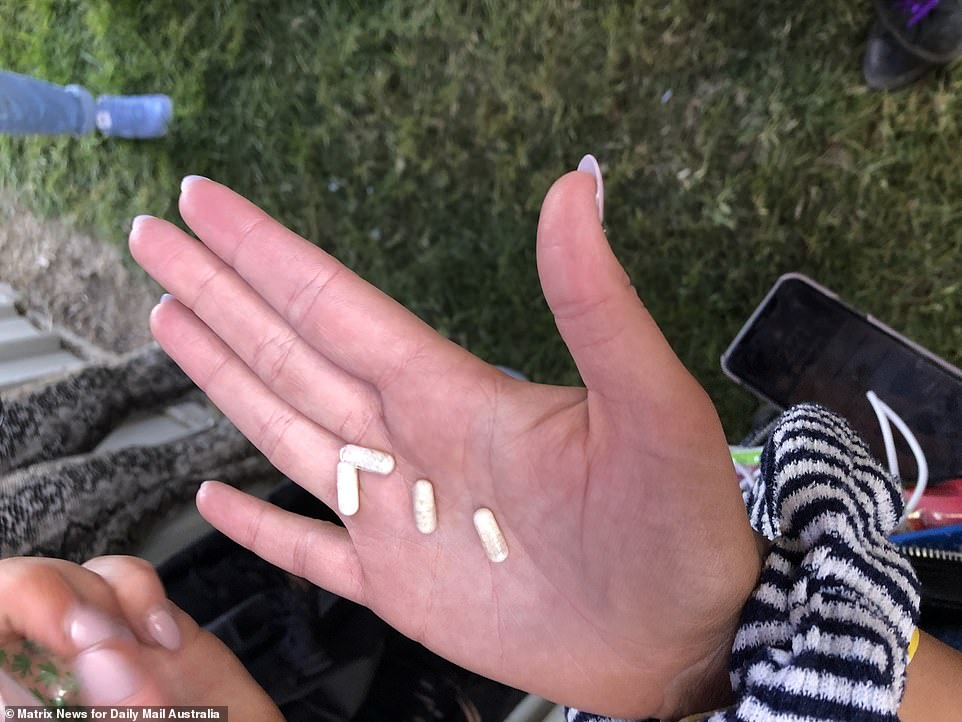 Seven young revellers could have died at a music festival in Canberra because their MDMA capsules were laced with a deadly toxin that has already claimed other young lives (pictured: a Groovin the Moo attendee’s drug capsules before being tested)

While the revellers were quick to tell the volunteer they felt safer with the facility, she reminded them no matter the outcome inside the tent, everyone is responsible for what they put in their body and to be sensible.

After the short wait and brief information session, the patrons were invited inside the testing tent.

Within moments, phones were taken and put into a safe. A bag number was given to one person in the group, who was responsible for collecting the phones at the end of the process.

A doctor and volunteer then gave the group a quick rundown of the procedure and pointed out information sheets located on the wall of a divider separating the information room to the testing room.

Next to the information at about 3pm were three red cards. It had previously been identified that drugs were separated into three categories; red, yellow and white. 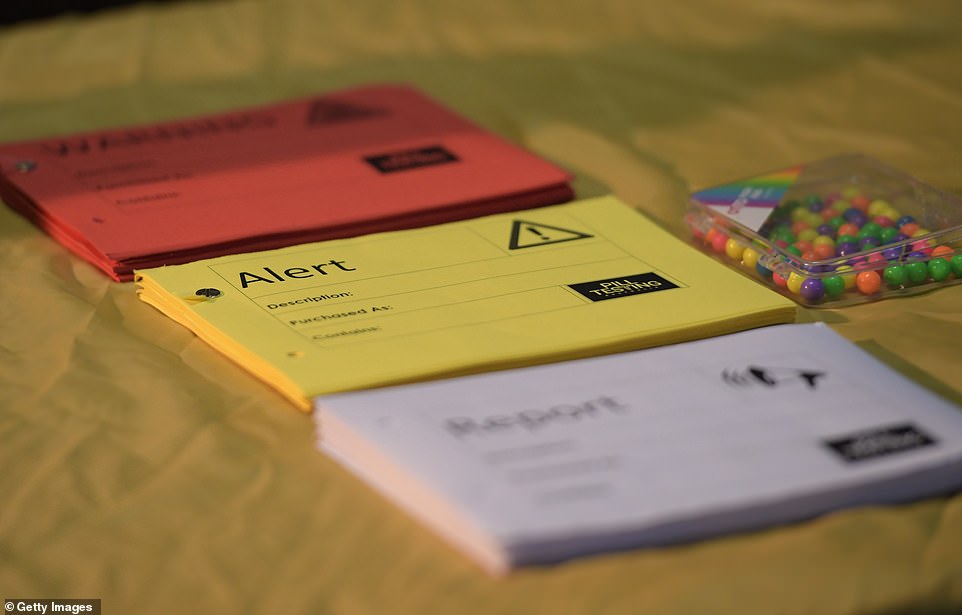 Next to the information at about 3pm were three red cards. It had previously been identified that drugs were separated into three categories; red, yellow and white

Yellow indicates the drug is not what the patron thought it was, while white means the drug was accurately described by the patron on arrival.

A red result meant the drug contained potentially deadly additives such as N-Ethylpentylone – a stimulant which was present in seven samples at Sunday’s festival by mid-afternoon.

The three red cards were associated with three samples of N-Ethylpentylone which had already been identified and disposed of. Daily Mail Australia later learned another four samples were found as the night went on.

The group inside the tent were then provided a unique identifier number, which they were told to keep on their person all day in case they experienced an adverse reaction to the pills. 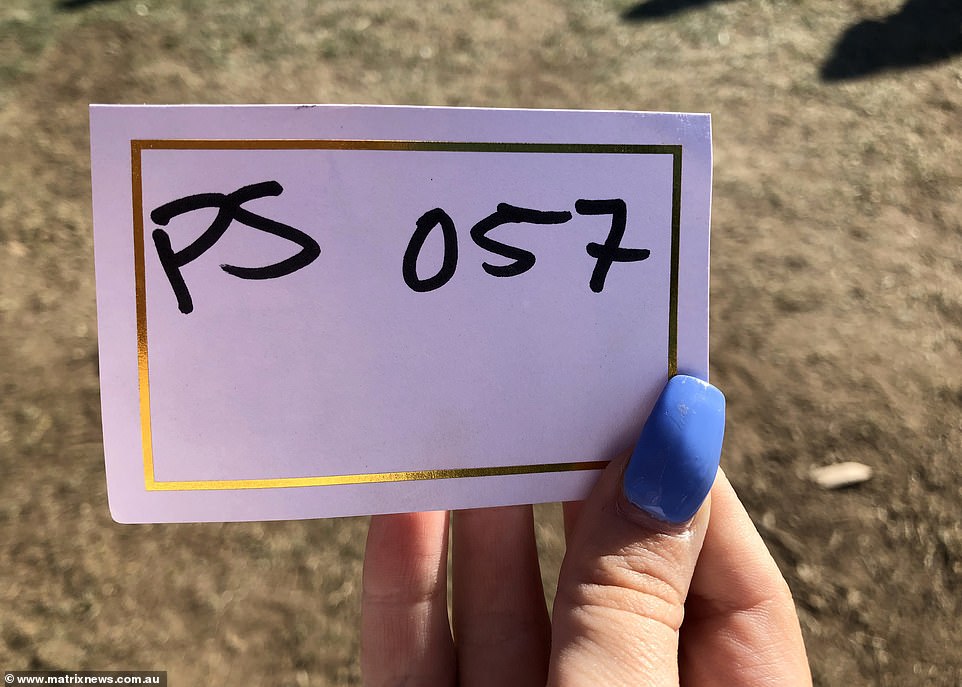 The group inside the tent were then provided a unique identifier number, which they were told to keep on their person all day in case they experienced an adverse reaction to the pills 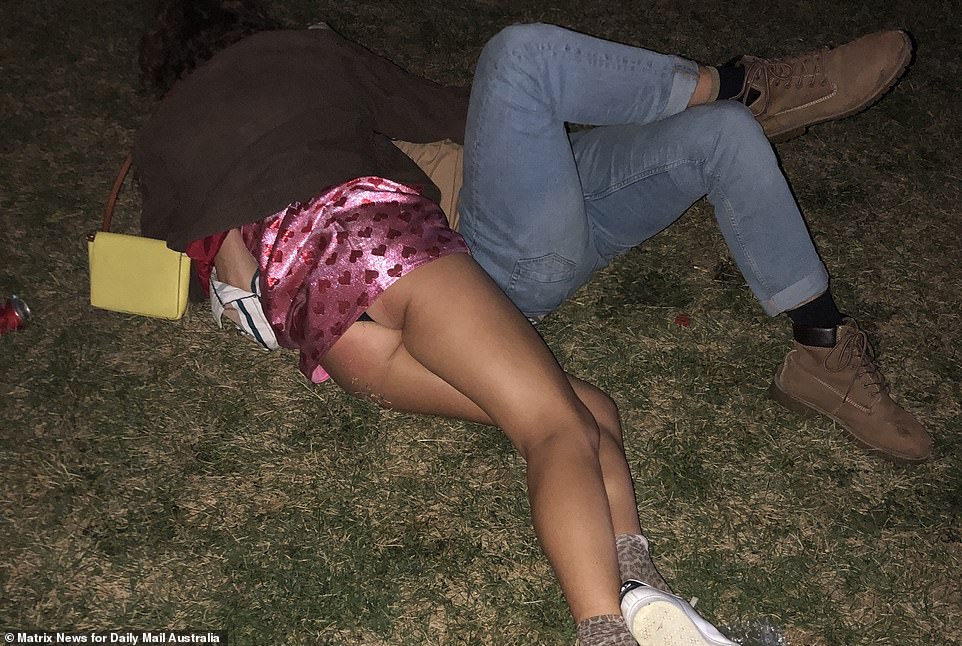 By nightfall, many of the revellers had decided to stop dancing and rest ahead of the headline acts final performances

If that happened, first responders would be able to call the pill testing tent and recite the number on the card. Doctors could then give an accurate description of what pills had been consumed.

Knowing what a person has ingested saves time and can be the difference between life and death.

Doctors and chemists then took one of Sophie’s capsules and unscrewed the two parts. They asked how much she was willing to sacrifice for the sample, and what she thought the drug was.

She told them she was happy to sacrifice enough to get an accurate reading, and said she was under the impression the drug was MDMA.

Sophie told Daily Mail Australia she was surprised when the results came back with an 85 per cent purity reading. The pill contained primarily MDMA, and no other substances were identified to have been significant.

A doctor told the group the testing process scans the chemicals of the drug and compares it with more than 30,000 samples in the system to identify any matches. 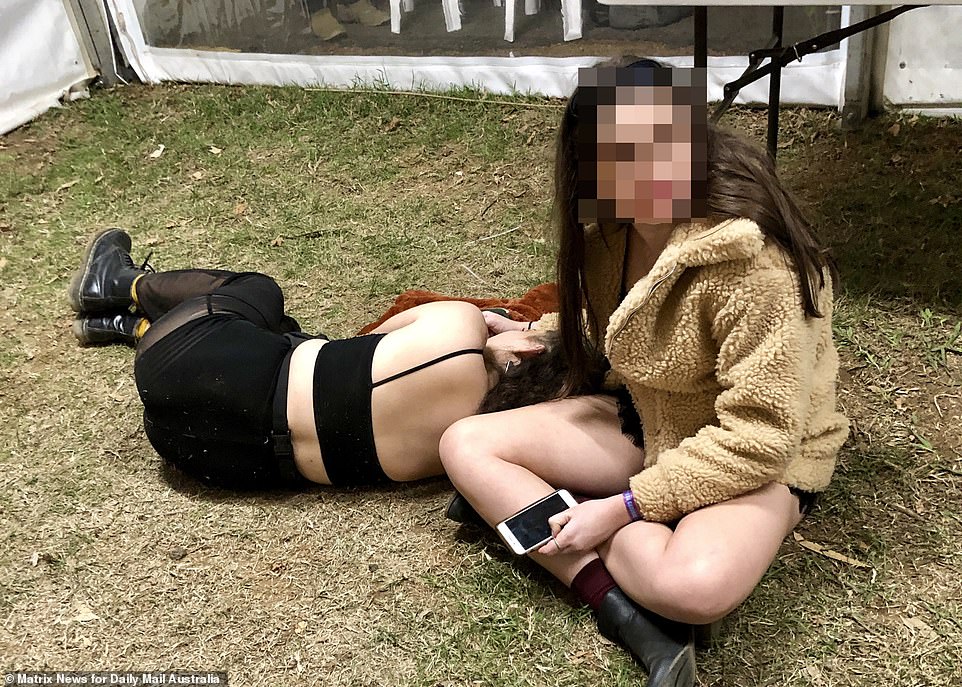 As day turned to night, more people turned to the Red Frogs tents volunteers for support and to keep them out of the cold

– The drug may cause convulsions, paranoia and may result in death

– It emerged around 2016 in the United States

– It’s part of the ‘bath salts’ (cathinone) family of stimulants

– It’s been known as a phenomenon known as ‘mass casualty overdoses’, where 10-20 people drop simultaneously

He then went through the process of warning against drug use. He particularly focused on the harms and risks associated with consuming MDMA, especially in high doses or pure forms.

He reminded Sophie and her group the best way to keep safe was to not consume drugs at all, and to listen to their own bodies and seek help should they need it.

Councillors and volunteers then took over as another group made their way through the testing facility.

They had set up a ‘chill out zone’, kitted out with beanbags, lollies, water and information sheets.

They councillors were provided Sophie’s results and spoke with the group about any concerns or questions they may have had, before providing lollipops and sugary treats and leading them to the exit.

The group were reminded they could come back at any time for more information and all phones were returned, before they were ushered out of the same entrance they came in through.

While seven samples of N-Ethylpentylone were located, organisers saw the responsible decision-making of potential users who threw out the drugs as a positive outcome.

N-Ethylpentylone is often mis-sold as MDMA or ecstasy and has been linked to multiple deaths according to the World Health Organization.

‘The pilot was again overwhelmingly successful by any measure but particularly by doing everything possible to keep our kids safe,’ Pill Testing Australia’s Gino Vumbaca said.