Inside India’s first elephant hospital for animals saved from performing

These pictures reveal India’s first elephant hospital where animals rescued from performing at circuses and temples are given a chance to recover.

The facility in Mathura, in the state of Uttar Pradesh, is run by conservation group Wildlife SOS and has so far saved 26 of the animals from captivity with the help of Indian state governments.

Volunteers said many of the elephants are socially isolated and psychologically traumatised after their time in captivity, while many have ongoing medical problems.

In addition to the elephants forced to perform for cruel entertainment, some of the mammals need emergency care after accidents with trucks or cars while working along busy highways and roads.

The hospital is kitted out with portable X-rays and ultrasound machines, and includes an observation deck so that medics and their students can observe and learn about elephant treatments. There is also a hoist for comfortably lifting disabled elephants and moving them around the treatment area.

According to World Animal Protection data, there are more than 3,000 elephants still in captivity in India. Captive elephants can be found all over the country, but the exploitation is especially found in the southern state of Kerala.

An elephant named Gajraj, who was rescued from an Indian royal family, receives treatment at the Wildlife SOS Elephant Hospital in Mathura, Uttar Pradesh – the country’s first care centre for elephants rescued from horrifying conditions 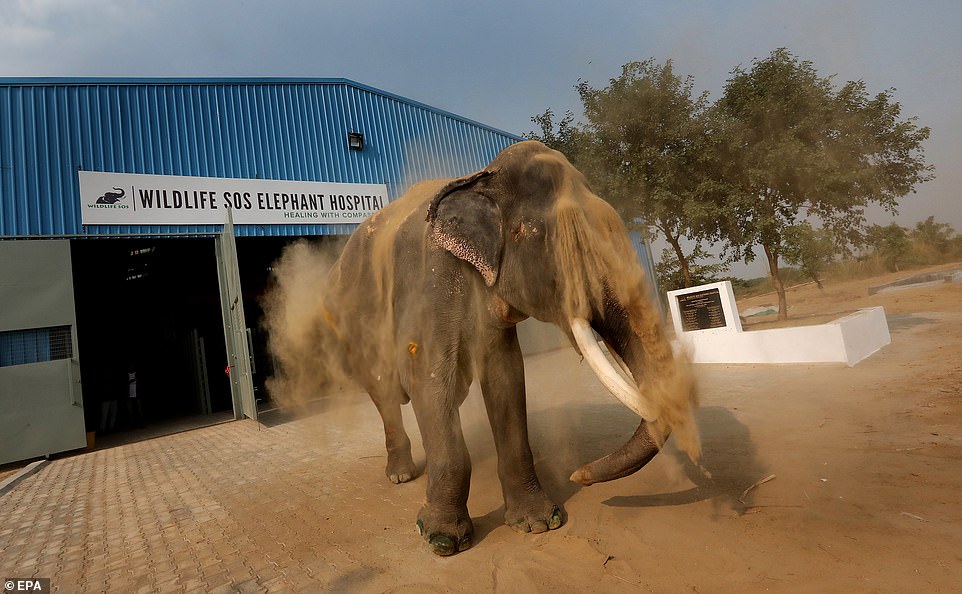 Gajraj takes a mud bath outside the elephant hospital in India. The animals have been rescued and brought to the medical facility for short-term medical treatment and long-term rehabilitation after their time in captivity 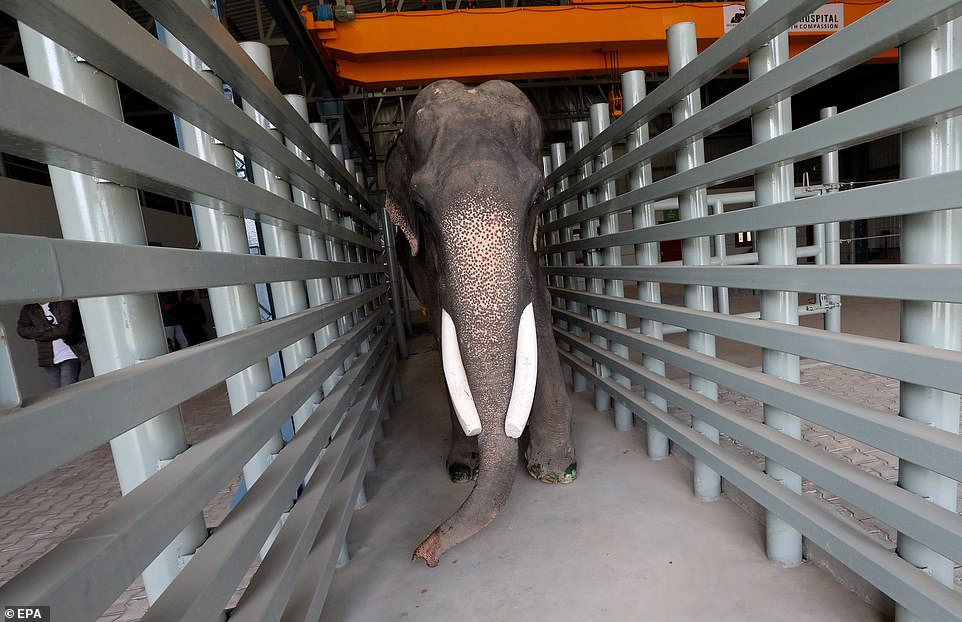 The same elephant, Gajraj, walks through the treatment centre at the new elephant hospital in India. Volunteers said the elephants are socially isolated and psychologically traumatised, while many have ongoing medical problems 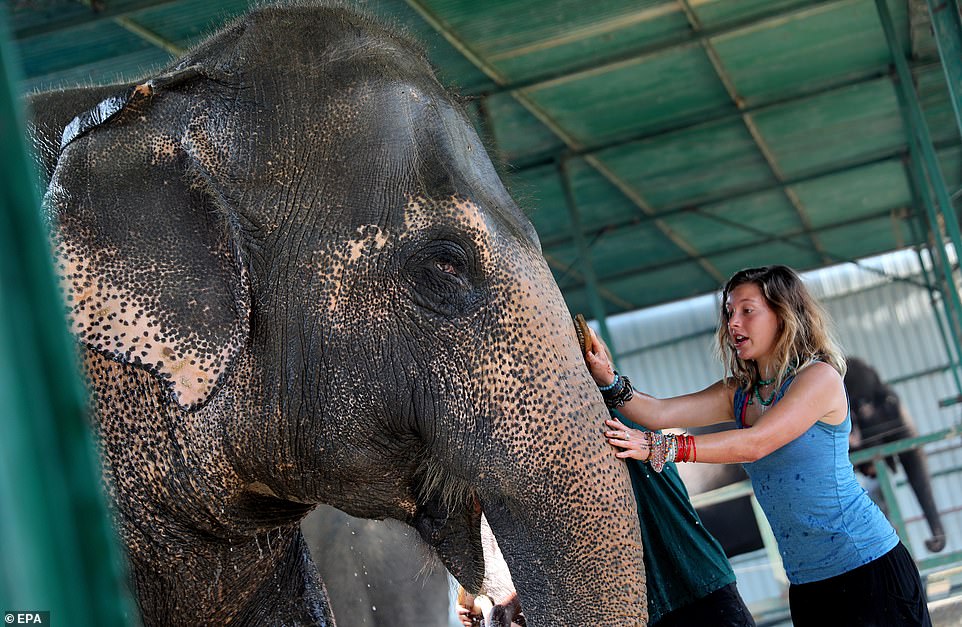 A volunteer rubs an elephant as it takes a bath at the medical centre in India. The NGO, Wildlife SOS, has worked with Indian state governments to rescue 26 elephants from captivity and bring them for rehabilitation at the new facility 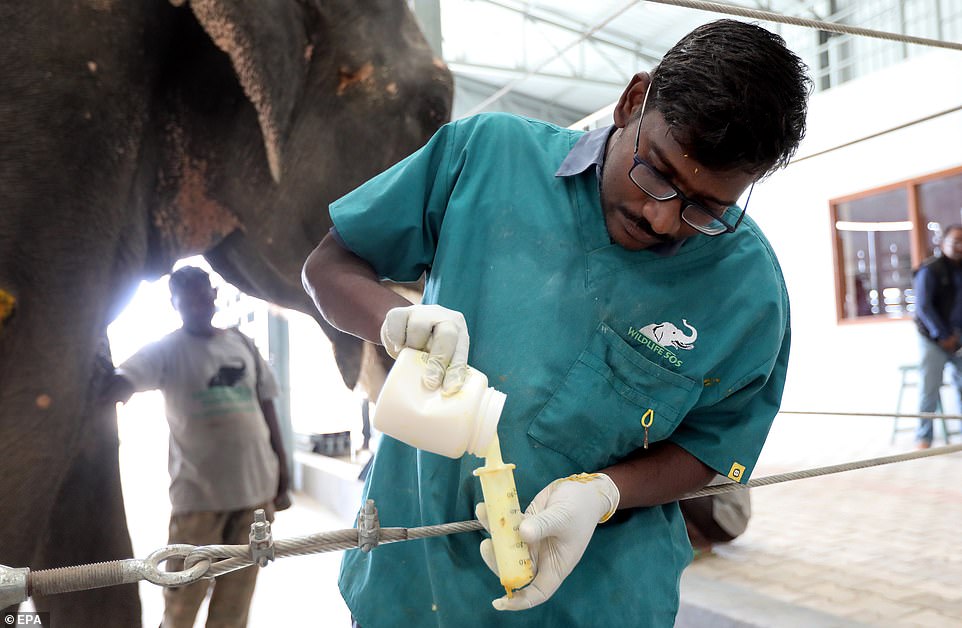 One of the Wildlife SOS workers measures out a quantity of liquid to help the elephant in the background. The hospital has huge quantities of life-saving drugs and veterinary medicines, and equipment such as X-rays and ultrasound machines 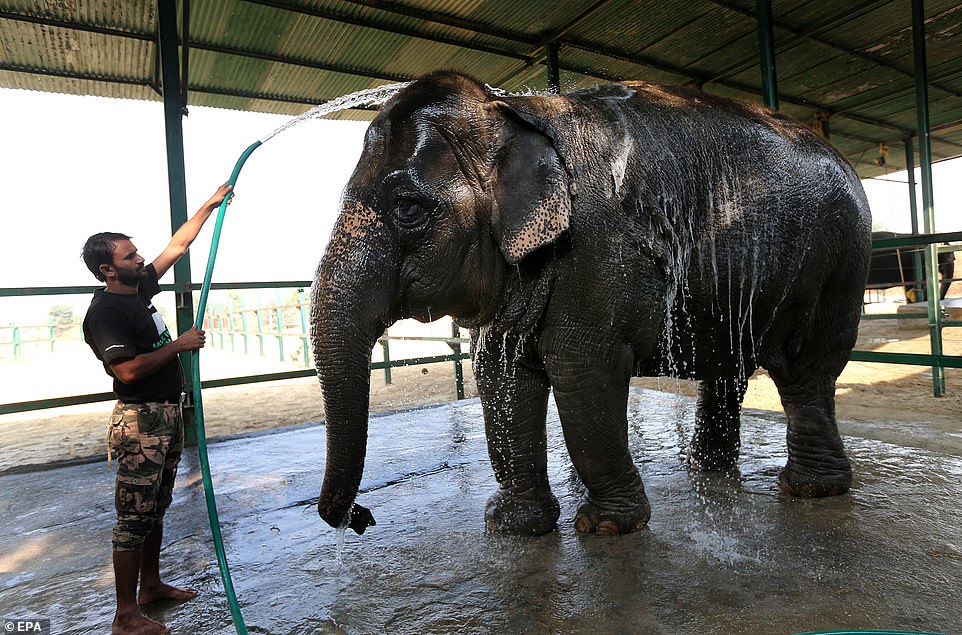 A worker hoses one of the rescued elephants at the Wildlife SOS hospital in Mathura. Some of the elephants are said to need emergency care after accidents with trucks or cars while working along busy highways and roads 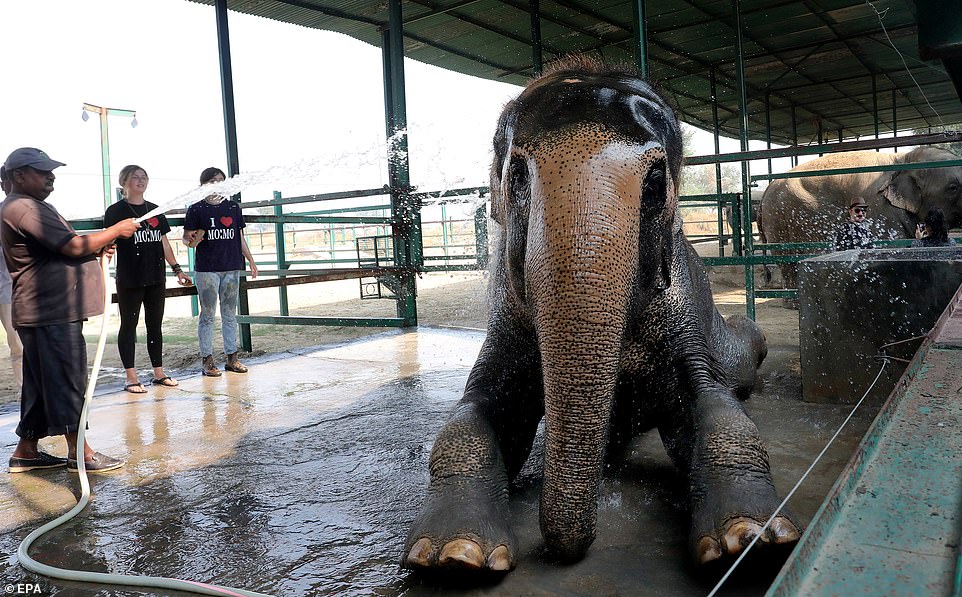 One of the elephants is hosed with water as volunteers set about restoring it to full health after it was rescued from captivity. Captive elephants can be found all over India, but the exploitation is especially found in the southern state of Kerala 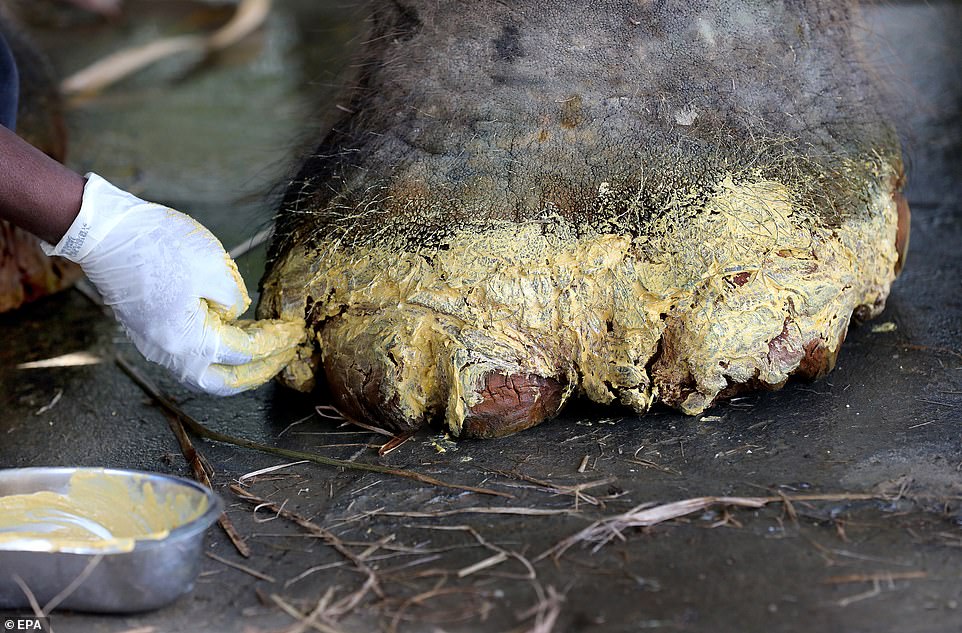 An elephant with chronic foot disease and generalised infection is treated by a volunteer wearing white gloves at the new medical centre in India. The rescued elephants remain dependent on humans for their day-to-day activities 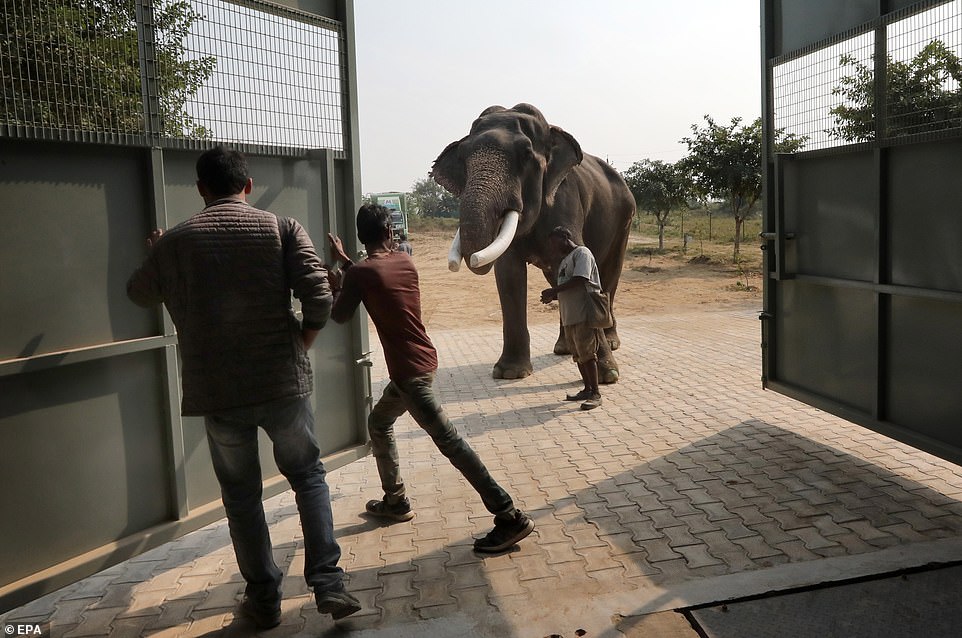 Volunteers open the doors to help Gajrarj, rescued from a royal family in India, enter the medical centre in Mathura, which also features a medical hoist for lifting disabled elephants and moving them around the treatment area 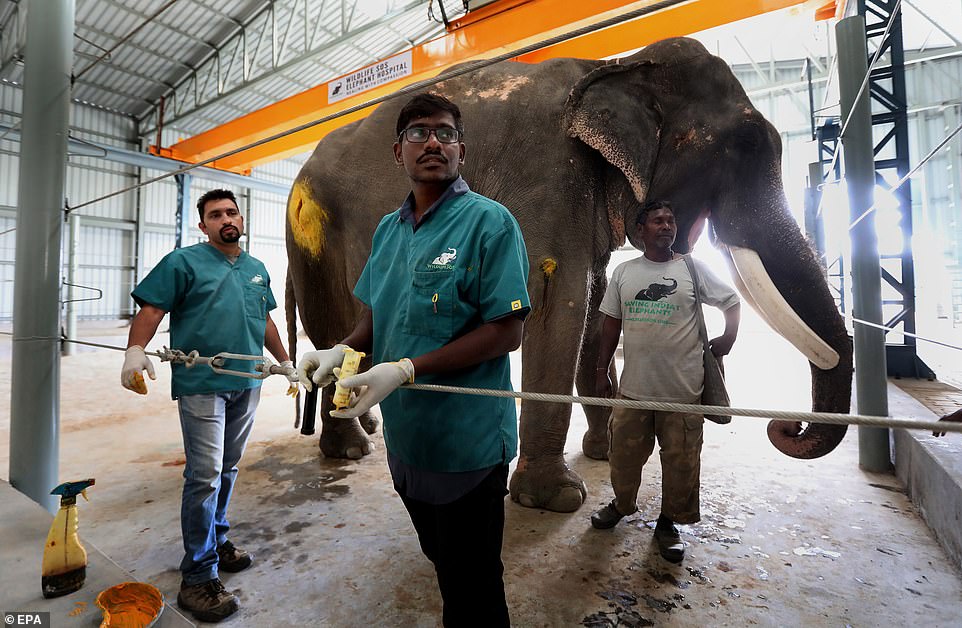 Three of the Wildlife SOS workers stand by the side of an elephant pen, as the huge animal recovers after it was rescued from captivity. Certain procedures and treatments require overnight observation, so he hospital is equipped with special quarters 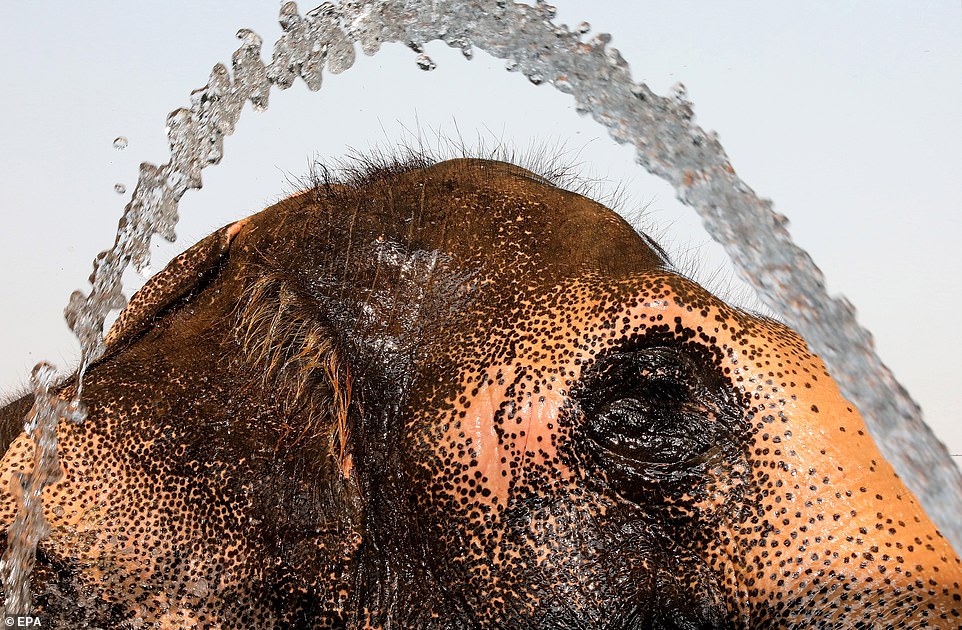 One of the elephants has water poured over its head as it recovers from its time in captivity. According to World Animal Protection data, there are more than 3,000 elephants still in captivity in India 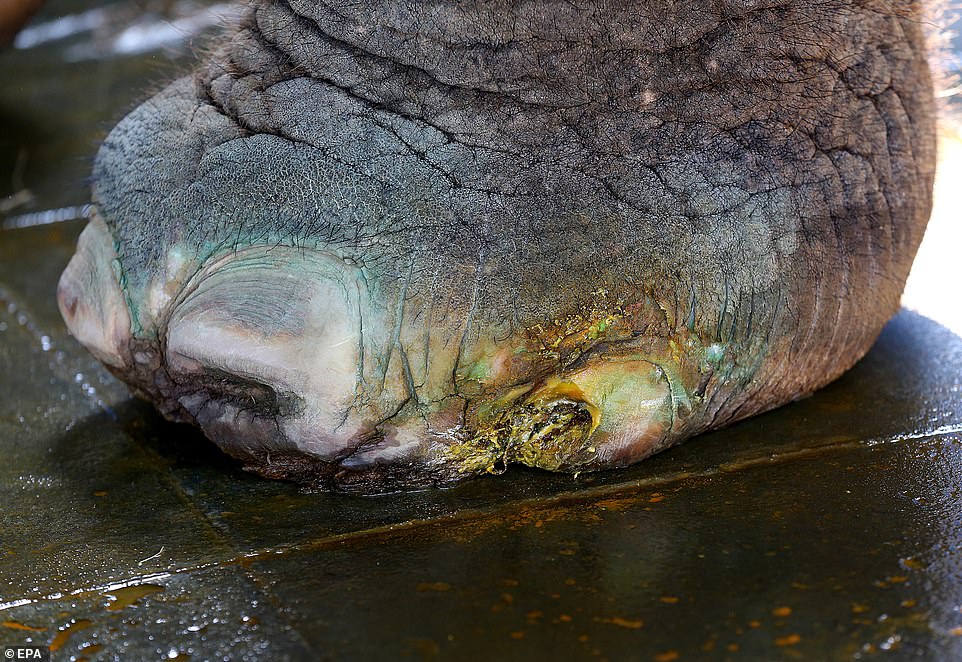 A close-up image of the chronic foot disease and infection suffered by one of the elephants at the hospital, who have been rescued from terrible conditions at circuses and temples or from use in street begging 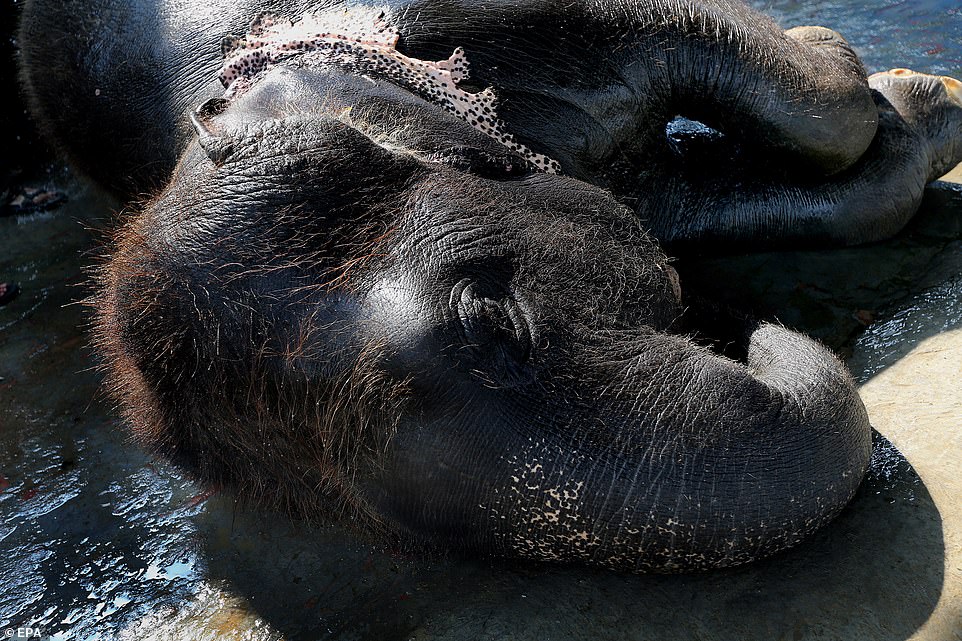 One of the rescued elephants takes a bath in the morning at the hospital in Uttar Pradesh in a picture taken last week. Some 26 elephants have been rescued and taken to the state-of-the-art hospital facility for treatment and recovery 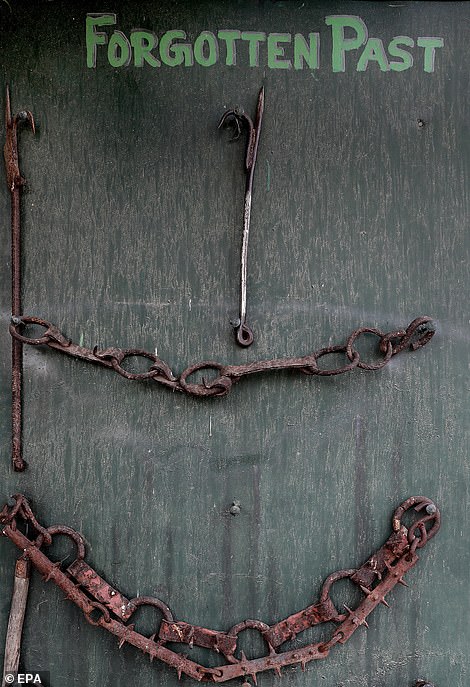 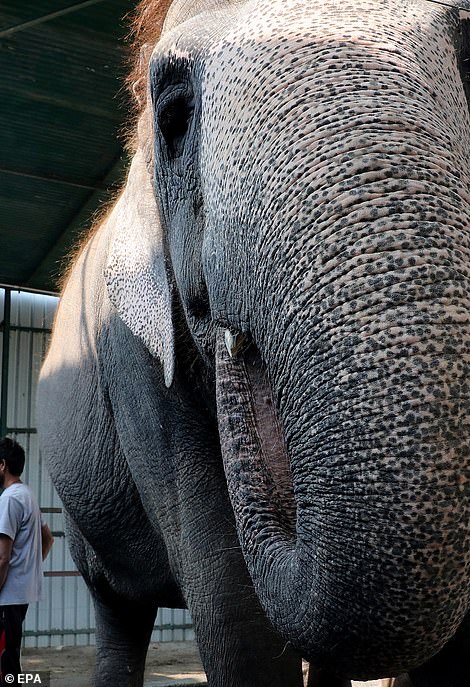 Pictured left: tethering chains, iron hobbles and hooks which were used to control captive elephants before they were rescued and taken to the hospital; right: veterinary officer Dr Yaduraj treats an elephant with chronic foot disease 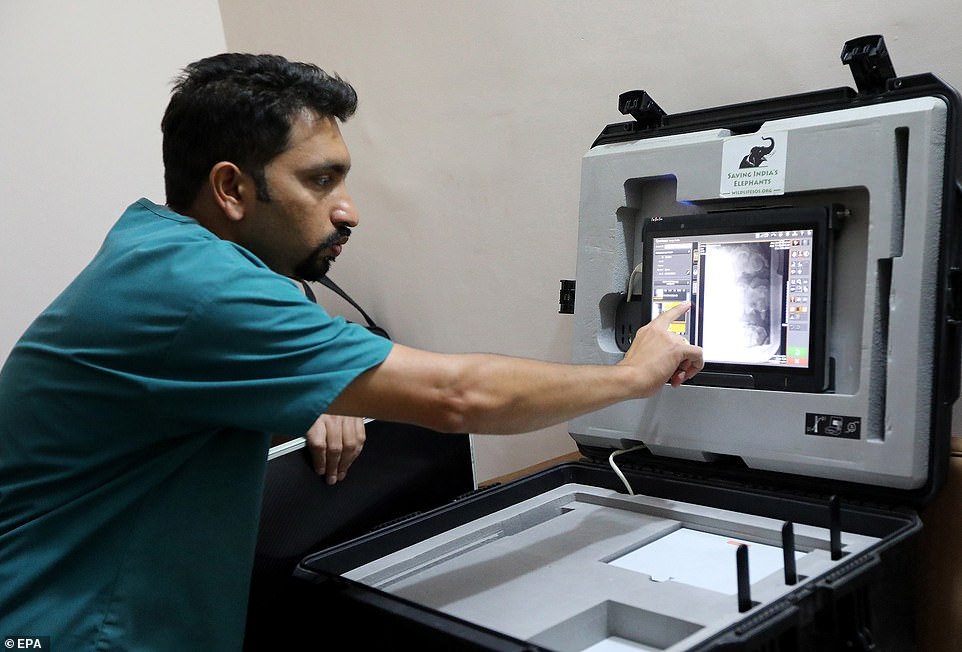 Senior Veterinary Officer Dr. Yaduraj shows scans on a screen of a high-end X-Ray device at the Wildlife SOS Elephant Hospital. The hospital also has a digital weighing scale and an elephant restraining device 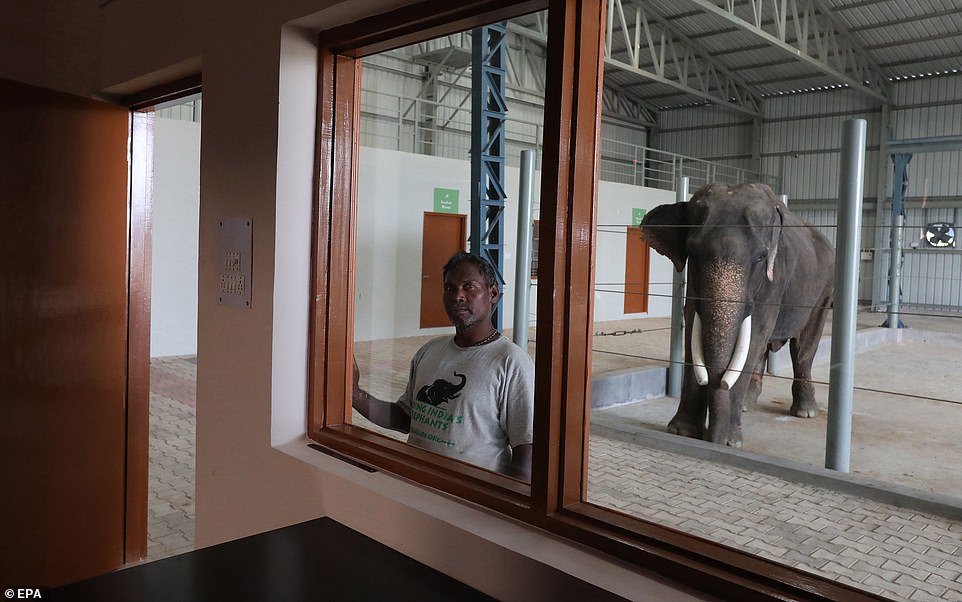 One of the NGO workers looks through a window while the elephant Gajraj looks on in the background. The hospital includes an observation deck so that medics and their students can observe and learn about elephant treatments 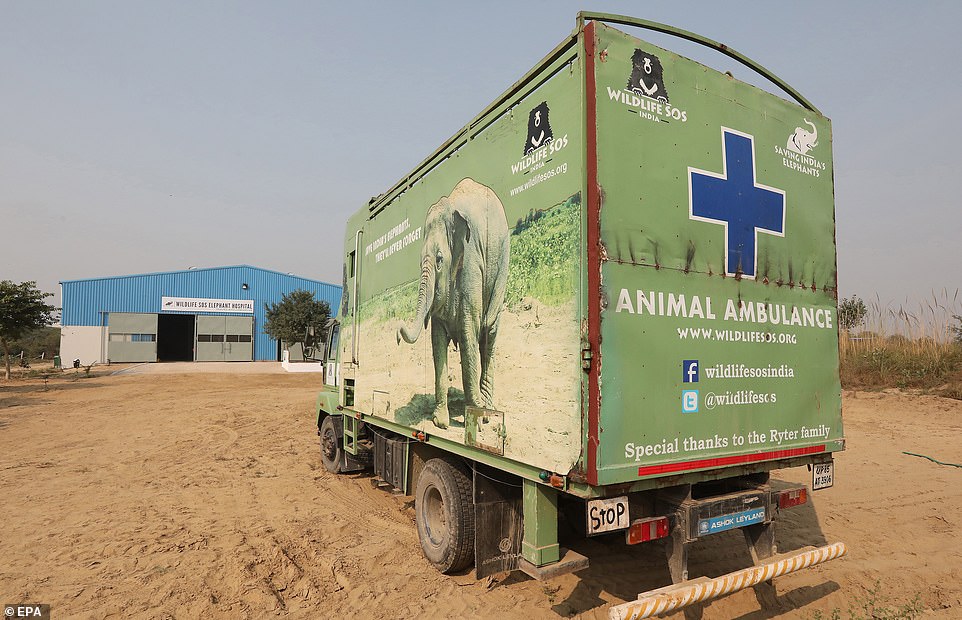 A specialized ambulance designed to rescue elephants is seen outside the Wildlife SOS Elephant Hospital, with the NGO’s new hospital building in Uttar Pradesh pictured in the background 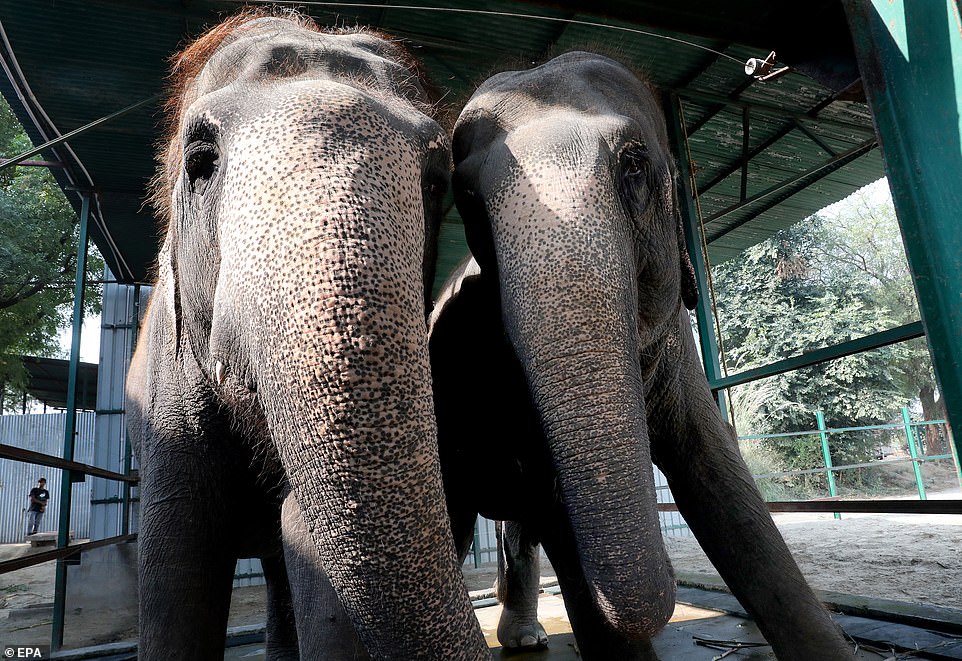 Two rescued elephants stand side by side at the hospital last week. The NGO says it aims to ‘provide the best treatment for elephants in Asia’ and spread knowledge of elephant welfare and veterinary practices 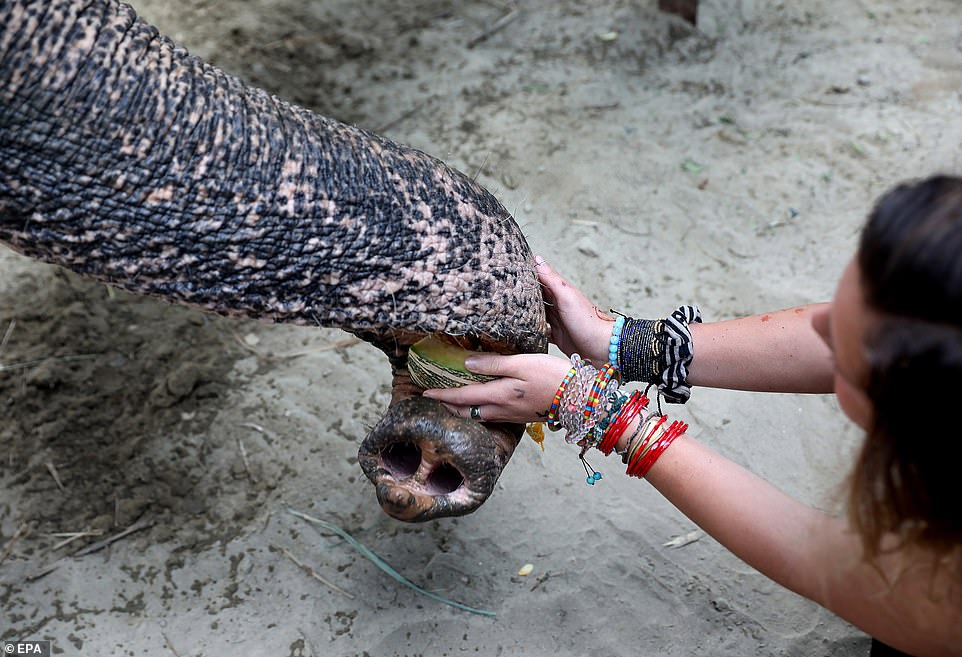 A volunteer feeds an elephant in the morning at the NGO’s new hospital in India. The organisation was founded in 1995 and says it has rescued ‘everything from bears to crocodiles and cobras if they needed help’ 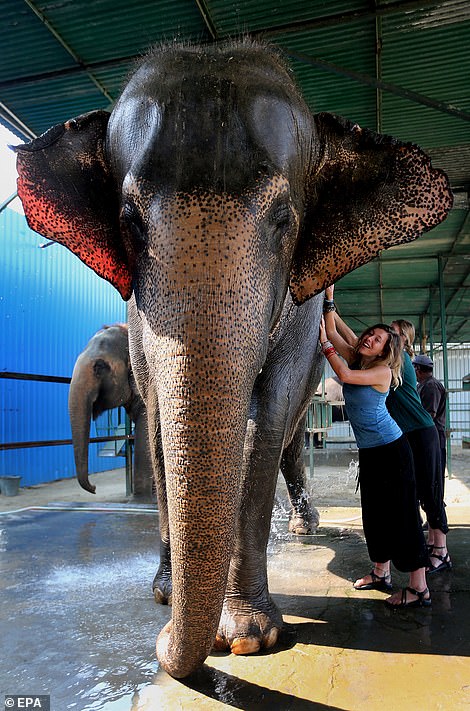 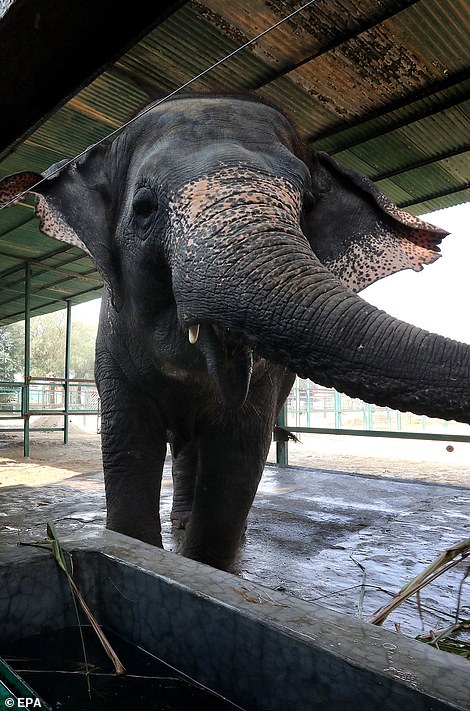 Volunteers rub an elephant as it stands in a pool of water (left) and another elephant stands in the hospital enclosure (right). The NGO workers also have closed-circuit, infrared cameras for veterinarians to observe their wards 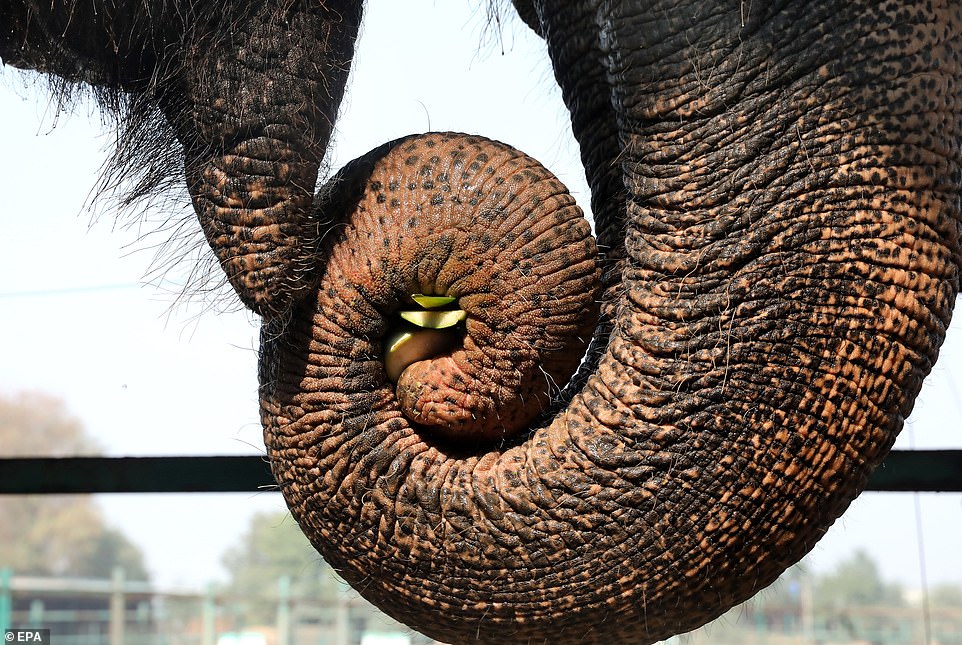 One of the rescued elephants eats fruit and vegetables during the morning meal time at the Wildlife SOS Elephant Hospital. The organisation says it ‘wants this to be a place of healing as well as a place of learning’ 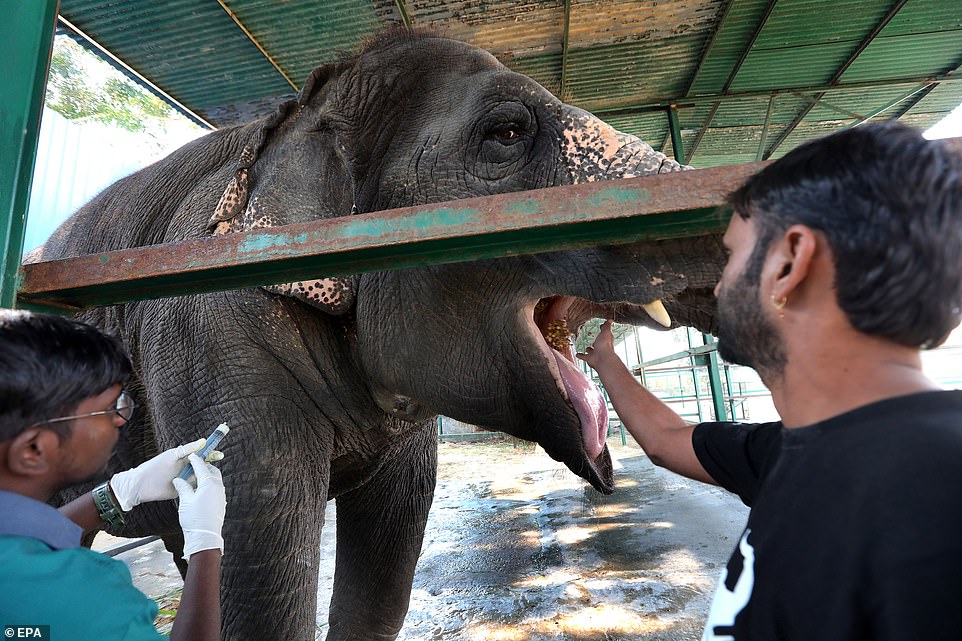 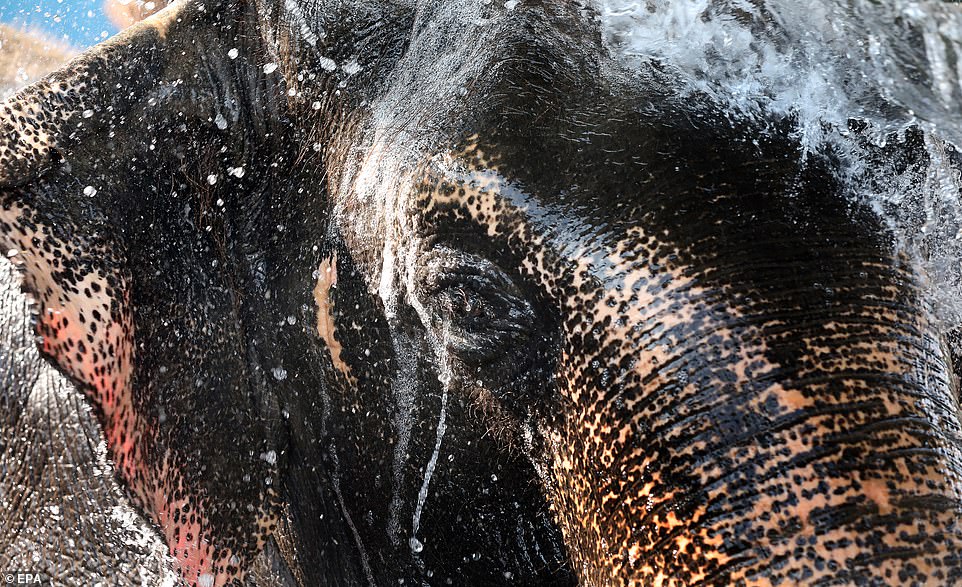 One of the rescued elephants takes a bath at the medical centre. Historically elephants have been used for war and business, stretching as far back as 5,000 years ago, but nowadays are mostly used for social and religious festivals and processions 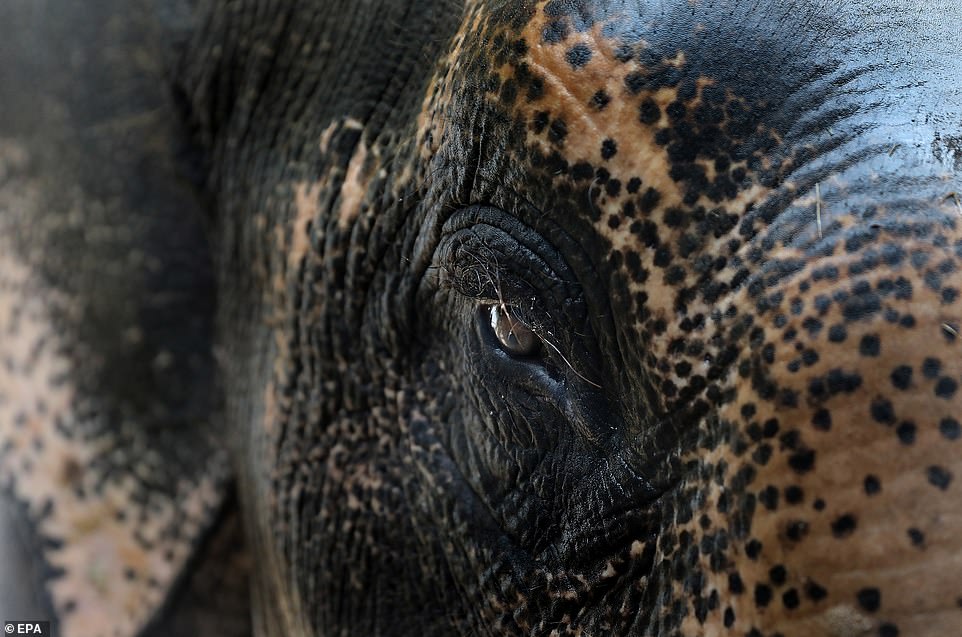 The eye of one of the rescued elephants is seen at close quarters in the Indian animal hospital. The building was unveiled to journalists and officials in an opening ceremony on November 16