Jurgen Klopp’s Liverpool side have taken to social media to give their fans an insight into Saturday night’s celebrations after beating Chelsea 6-5 on penalties at Wembley.

Liverpool completed a clean sweep of the domestic cups after Kostas Tsimikas struck the decisive spot-kick to get their hands on the FA Cup following a goalless 90 minutes and extra time.

Not only did their triumph over Chelsea earn Klopp some additional silverware, it kept Liverpool’s hopes of winning the historic quadruple alive. As a result, Liverpool’s players and staff ran off to celebrate with their fans following Tsimikas’s effort. 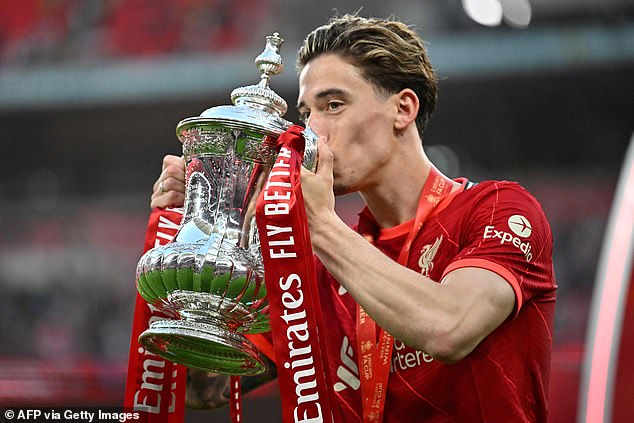 Meanwhile, Chelsea’s Mason Mount failed to convert from the penalty spot to keep them in it

The Liverpool squad danced around the stadium amid a fog of red flares. They even sprayed champagne and sang to their fans as they received the trophy inside the stadium.

Luis Diaz – who was chosen as the FA Cup final’s Man of the Match – was seen posing with the lid of the trophy on his head as he held onto his individual accolade following the awards ceremony.

Harvey Elliott may not have been in the match-day squad for the FA Cup final but that didn’t stop him from enjoying himself in the celebrations after game. 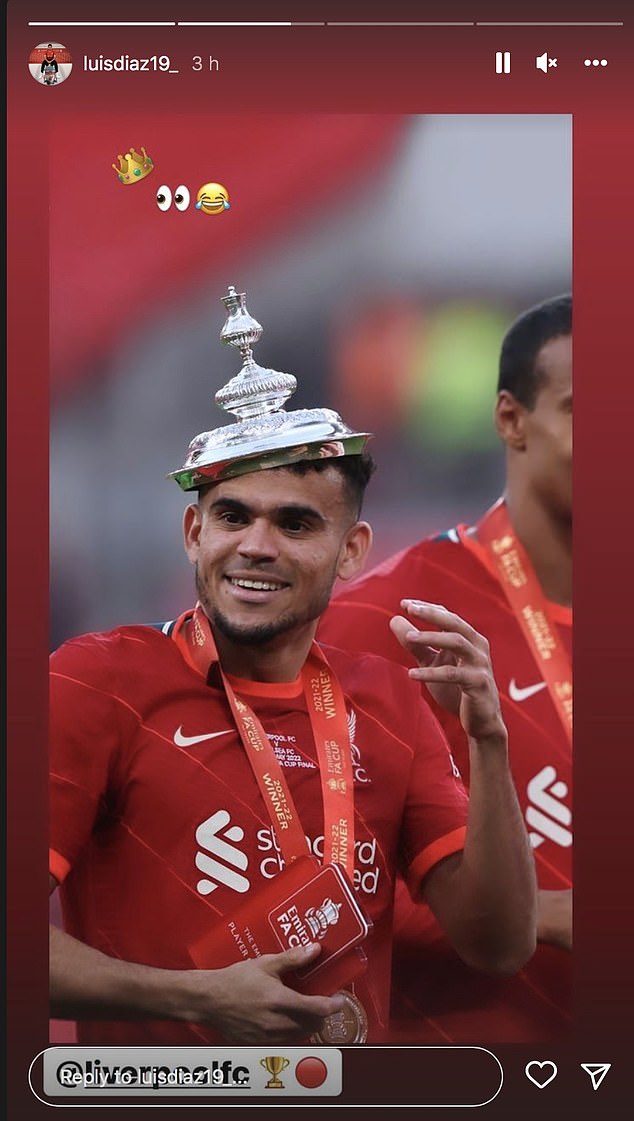 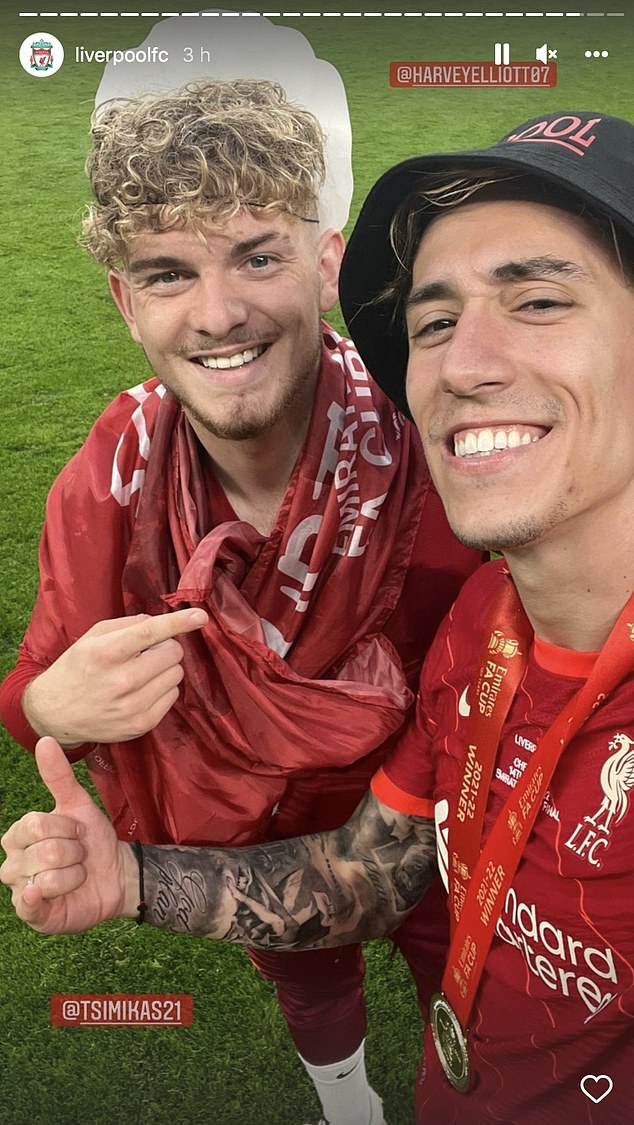 The 19-year-old was seen wearing Mohamed Salah face-mask and Liverpool flag as he jumped the club’s press officer Matt McCann for a piggyback.

The celebrations did not stop there. The Liverpool cohort took to social media to show their fans how the squad and staff had been celebrating the win in the changing rooms.

Jordan Henderson – who had an outstanding during the game despite having to play more centrally because of Fabinho’s injury – was seen leading the celebrations in the dressing room.

Still dressed in his match kit, with a pair of sliders on his feet, the Liverpool captain shuffled his way into the changing room while holding the trophy. His team-mates were heard singing along to Freed From Desire in the background. 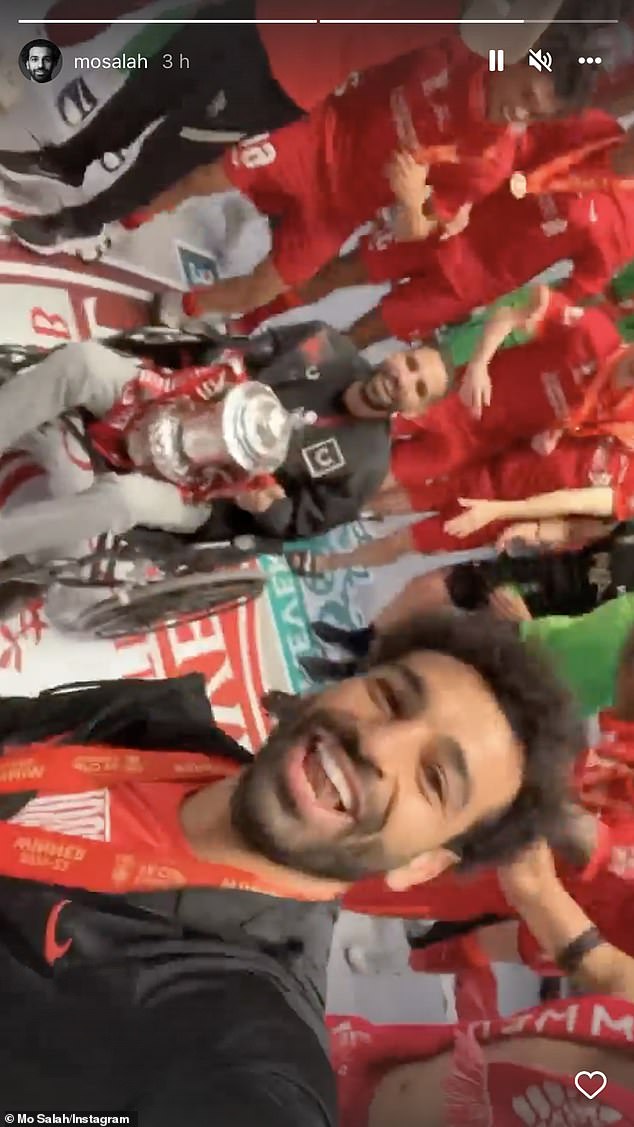 The squad were also seen celebrating their FA Cup win with Egyptian footballer Moamen Zakaria (middle), who was diagnosed with ALS in 2020

The captain then bent down to place the trophy on the Liverpool crest in the middle of the room. A decision which proved to be very popular as everyone was later seen dancing around the cup.

Mo Salah took to his Instagram story to share an insight into the players all dancing and singing in the middle of the changing room. His team-mates looked equally as excited as him about their triumph.

The squad were also seen celebrating their FA Cup win with Egyptian footballer Moamen Zakaria, who was diagnosed with ALS in 2020. He was filmed holding the trophy while in a wheelchair as the squad sang and chanted around him.

The players also put their voices to good use to serenade Virgil van Dijk by singing a re-work of The Pogues’ classic ‘Dirty Old Town’ that the Liverpool fans came up with for the defender.

The Dutch international clearly enjoyed the love he was getting from his team-mates as he raised his arms in the air and sang along while dancing with a topless James Milner.

Others took a more subtle approach to their celebrations and simply shared photos on their social media accounts of themselves holding the trophy alongside their pals.

Alisson – who saved Mason Mount’s penalty to give Tsimikas the opportunity to win the game – shared a photo of himself biting his medal in the changing room before posting one of him holding the trophy in the air.

The celebrations didn’t stop in the changing room either. The players carried on marking the occasion on the team bus after the game. James Milner took to Instagram to share a post with his fans.

Milner shared a photo of himself holding the trophy and smiling with his medal around his neck. He also shared a video which was taken on Andy Robertson’s phone using a hilarious TikTok filter.

The sad face filter has been taking TikTok by storm over the last week with plenty of videos going viral. The filter is designed to make a person look like they are crying without them knowing.

Robertson decided to try the filter out on Milner and was heard saying: ‘What you upset for? Has it been that much?’. Milner instantly realised what was going on and played along.

Milner then shared the video to his own page and captioned it: One was on my phone and one was on Robbos any guesses to which. What a team. Thanks for the incredible support’.