World number one tennis player Novak Djokovic is set to work up a sweat in the Wimbledon final this weekend.

But when the 32-year-old finishes competing for his 16th Grand Slam, the Serbian-born tennis player can look forward to relaxing in his incredible new luxury apartment ‘retreat’ in Miami Beach, Florida.

His incredible three-bedroom apartment at at Eighty Seven Park, believed to have cost $6.7M has a wrap-around balcony, offering panoramic view of the sea, as well as two private pools.

The tennis player called his new home in south Florida ‘his new retreat’ and revealed the house ‘provides the perfect lifestyle’ for him and his family, who have a coveted key to the residents’ gated private park.

The tennis star recently purchased an apartment in Eighty Seven Park in Miami Beach, which offers private gardens and panoramic views of the sea

Novak, along with his wife Jelena and their two young children, Stefan and Tara, will be looking forward to returning to their luxury apartment which is described in an area ‘where land meets the ocean.’

His apartment in Eighty Seven Park in Miami Beach is one of just 66 intimate residences in the glass tower, ranging from 1,400-7,000 square feet, complete with 15- to 25-foot wrap-around balconies.

The eco-conscious and elegantly designed glass tower floats atop a private residents’ garden to the North, the sprawling 35-acre North Shore Park to the South and boasts unobstructed views of the Atlantic Ocean to the East. 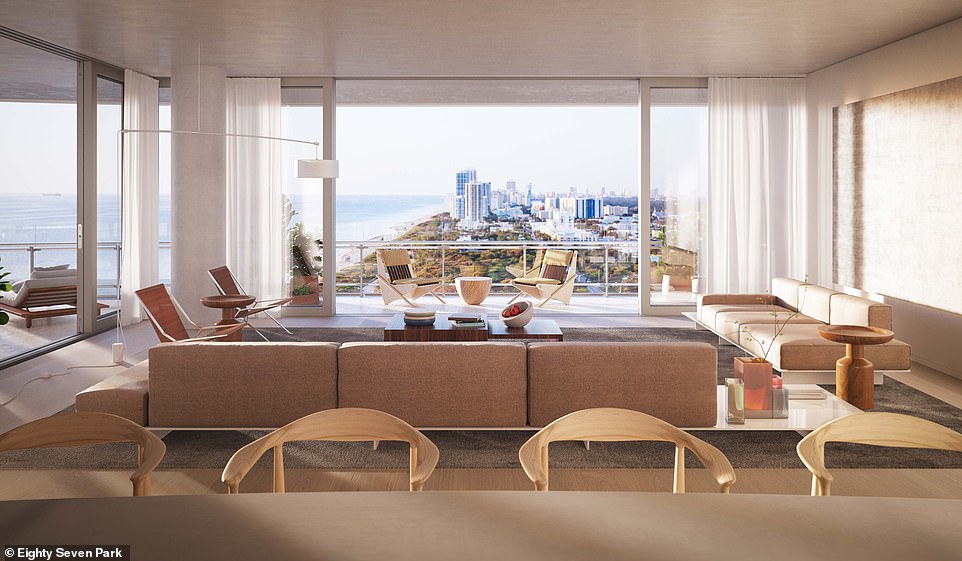 The stunning tower boasts apartments worth up to $9,900,000 and has 360 degrees of breathtaking bay, ocean, park and city views (as pictured from the living area) 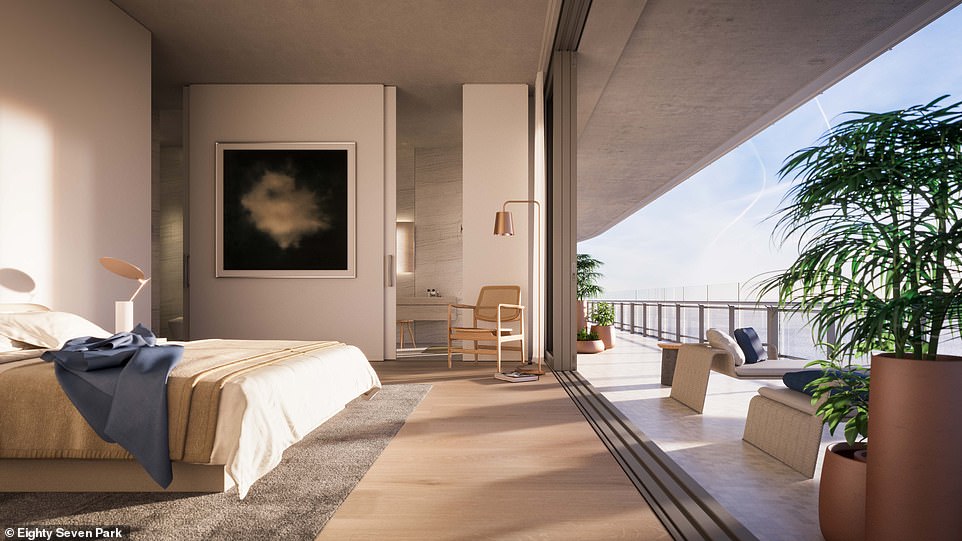 Novak described the stunning three-bed home as ‘his new retreat’ that he hopes to share with his wife Jelena and two young children, Stefan and Tara, and said the floor to ceiling windows were one of the main attractions of the property 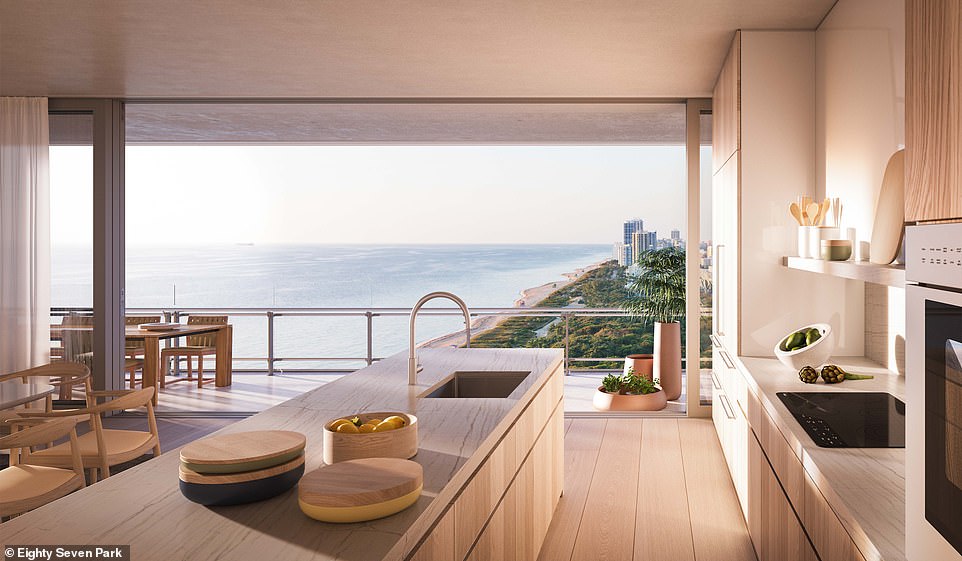 The gorgeous kitchen draws from nature with its stunning wood finish, and boasts floor to ceiling windows. The apartment has a panoramic wrap around balcony offering incredible views of the coast 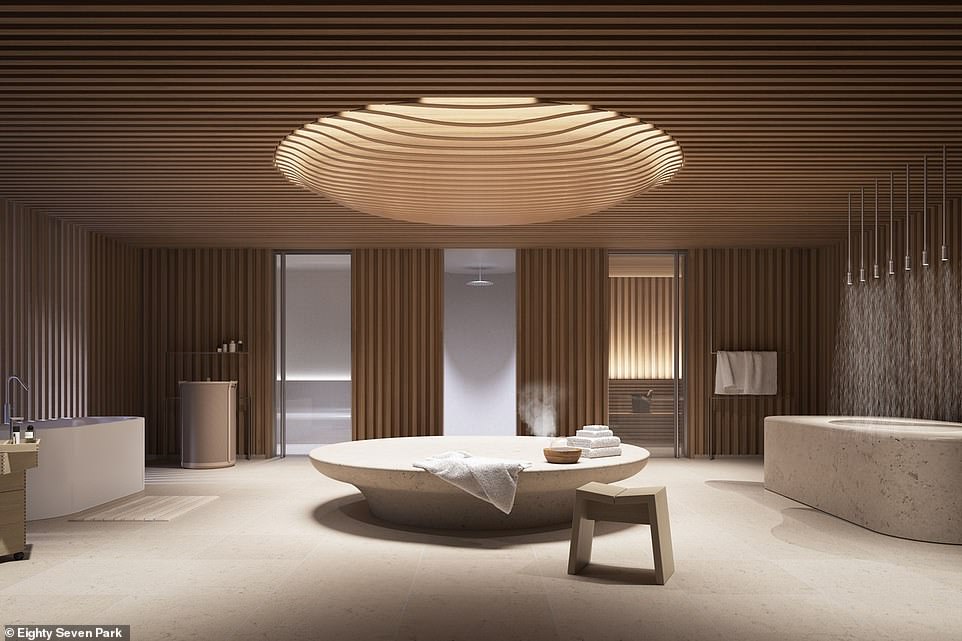 As well as having three bathrooms inside his apartment, Novak and his family will have access to the building’s luxury spa and fitness center

The building itself features two swimming pools, a soul center spa and fitness center, enoteca wine bar and cellar and a private library.

The home features floor-to-ceiling custom windows and a design palette that draws from the surrounding natural elements of North Beach in each residence, allowing the Djokovic family to feel at one with nature from their very first step inside.

Novak revealed: ‘I was inspired by the unmatched level of service, exclusive park access, in-house botanist, and panoramic views of both land and sea.’

He added: ‘It all provides the perfect lifestyle for me and my family.’ 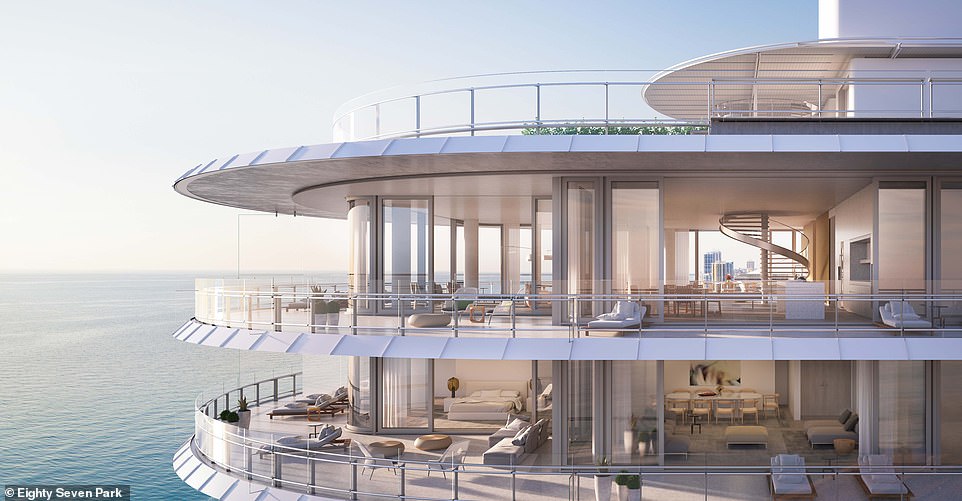 Novak revealed the stunning sea-view apartment offered a ‘perfect lifestyle’ for him and his family, suggesting he loved the peaceful and serene location 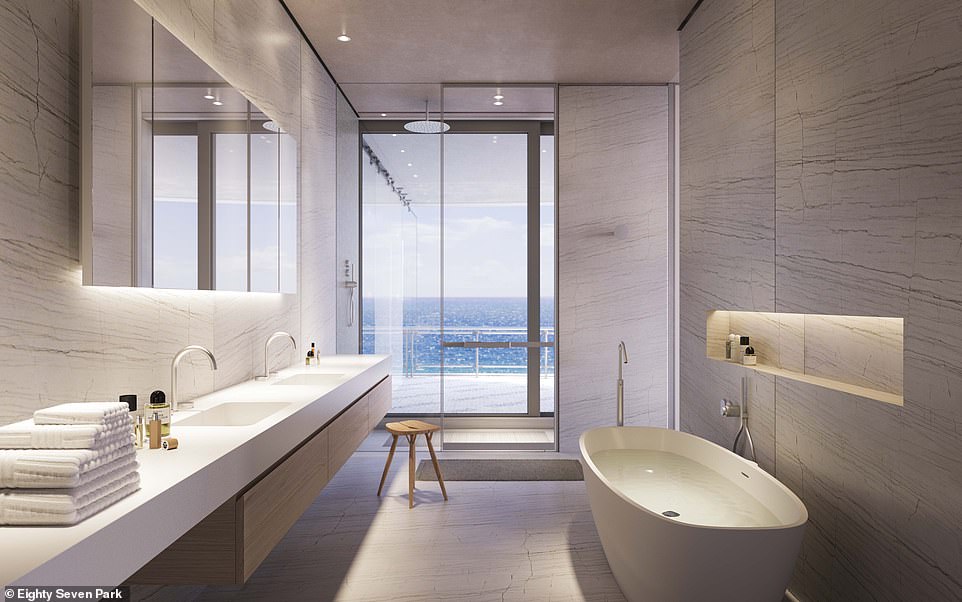 As well as the shared spa in the building, Novak’s apartment has three separate bathrooms, providing him and the family plenty of space to get ready in the morning – or wash off the sand from a fun day at the beach 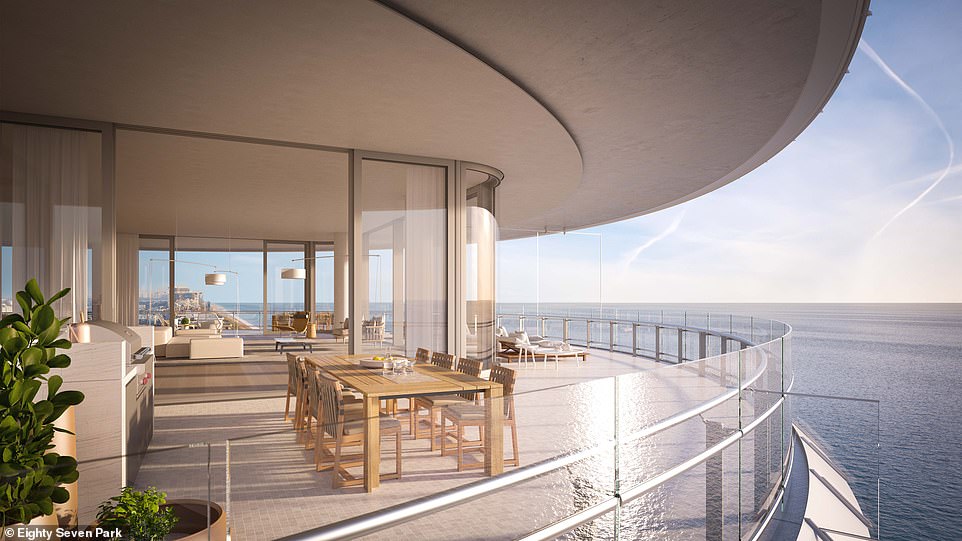 The tennis star suggested the apartment would be his ‘new retreat’, and praised the wrap around balcony on his apartment, revealing: ‘I simply love the design of this building’ 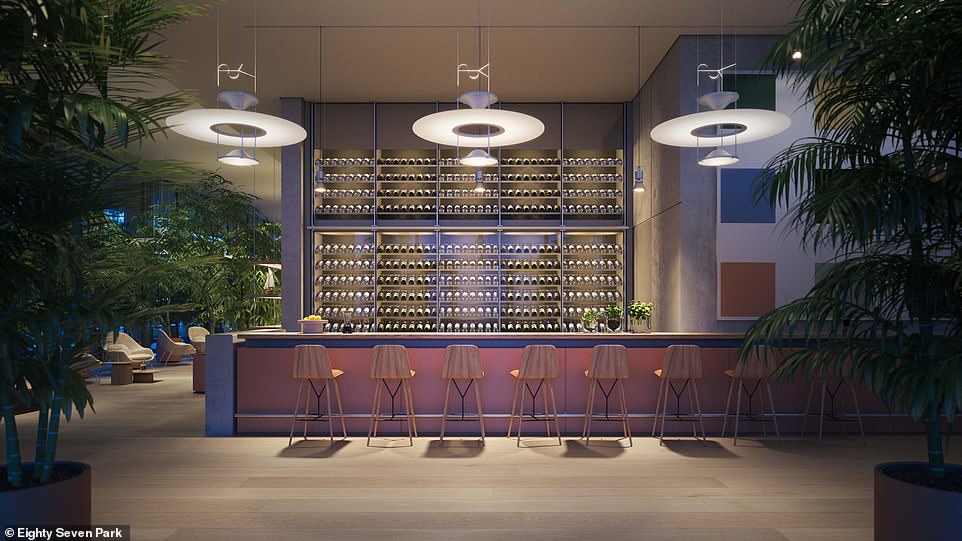 The unique and ultra luxurious building also features a Enoteca wine bar and cellar where Novak and his wife Jelena can relax, as well as a private library 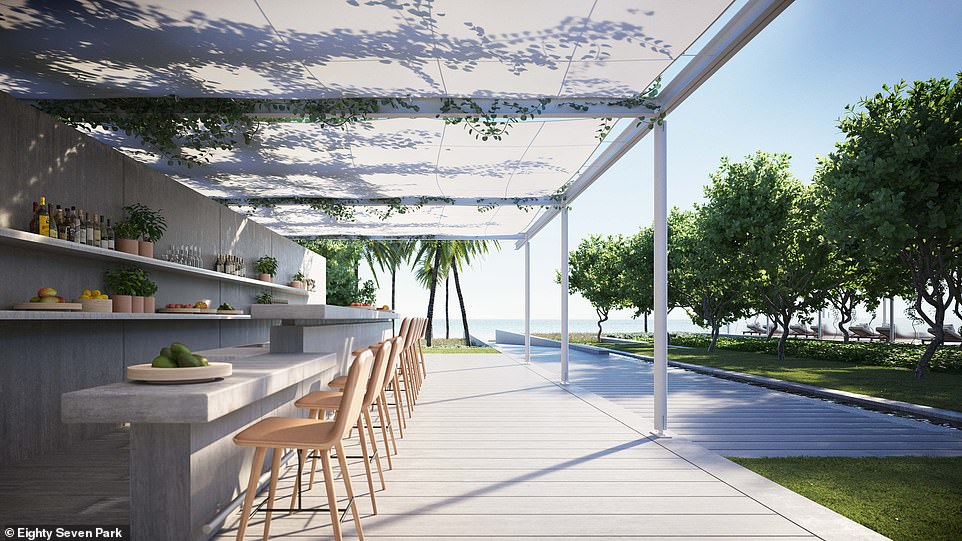 The stunning luxury building also has private access to the white sands of North Beach, two private swimming pools, and a juice bar (pictured above)

Situated in the relaxed community of North Beach and set apart from the noise and hustle of South Beach, the glass tower provides the perfect place to maintain his diligent wellness regime. 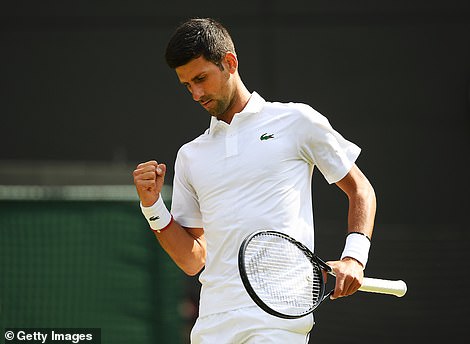 Novak Djokovic of Serbia is number one in the world for men’s single tennis, and is currently competing in Wimbledon at All England Lawn Tennis and Croquet Club

Adding to the project’s appeal was Djokovic’s admiration of Renzo Piano’s acclaimed worldwide portfolio, the Pritzker Prize-winning architect and mastermind behind the elliptical condo design, is Piano’s first architectural venture in the United States.

Offering privacy at every turn, Novak will also receive a coveted ‘key to the park’ which is being designed by Dutch landscape firm West 8 – renowned for their famed transformation of New York’s Governor’s Island.

The condominium’s paramount fitness center and underground spa will give Djokovic a chance to indulge in the hammam, sauna or steam room on his days off.

‘I simply love the design of this building,’ said Novak. ‘This is an unexpected location in a neighborhood that’s rapidly growing and that’s what attracted me to buy here. It will be my new retreat.’

Ranked number one in the world for Men’s Singles Tennis and listed as the 6th highest earning athlete in the world, Novak has gathered his earnings from on the court winnings and through numerous sponsorships.

In 2013, he wrote a nutrition and lifestyle book called ‘Serve to Win: The 14-Day Gluten-Free Plan for Physical and Mental Excellence’ focusing on the gluten-free diet that he believes changed his career. 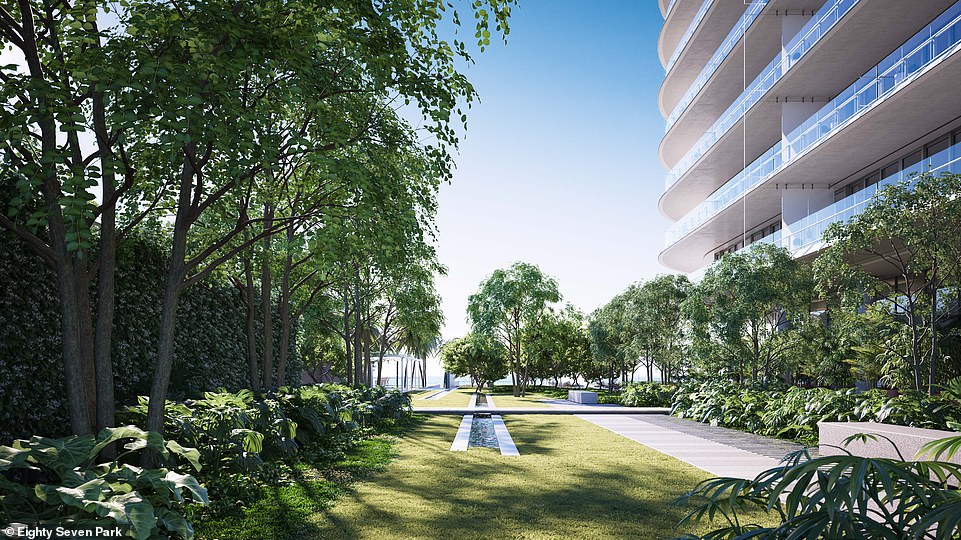 Novak will also receive a ‘key to the park’ allowing him to relax in privacy in the gated private park on the North side of the building, sculpted by Dutch landscape firm West 8 – renowned for their famed transformation of New York’s Governor’s Island 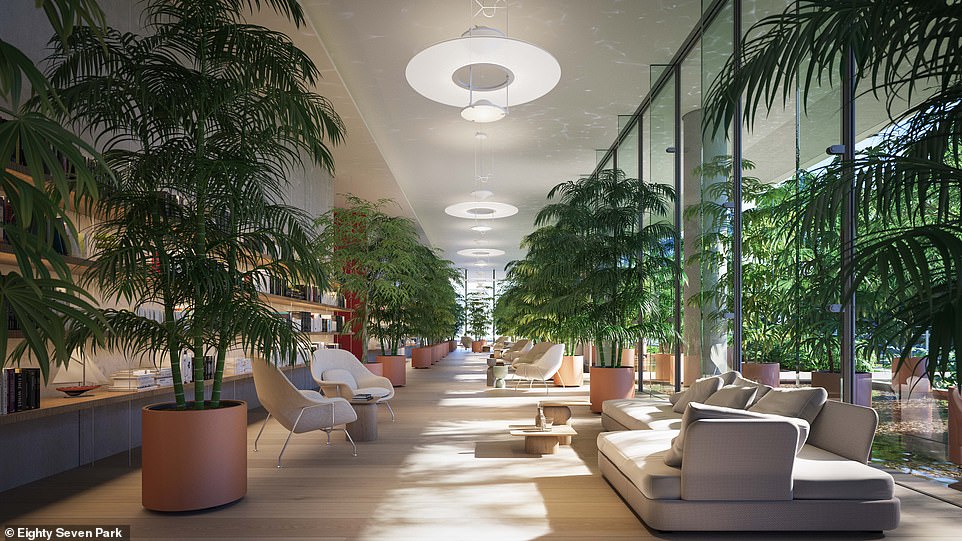 The building’s library offers a stunning space to relax, with the tennis star suggesting he ‘simply loved the design of this building’ 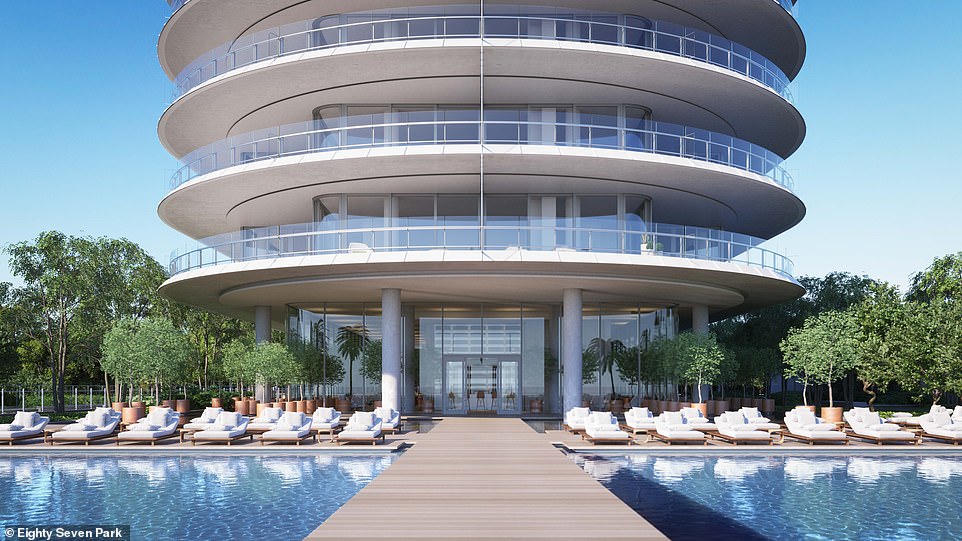 Novak suggested the apartment building offered him and his family the perfect balanced lifestyle, with its two private swimming pools and exclusive private park access