‘It’s the best in the world, hands down.’

Mr Macheras flew on the delivery flight of the hi-tech aircraft from Airbus HQ in Toulouse, France, to Qatar’s HQ in Doha, at the end of February. And he had a very comfortable flight indeed.

‘It’s the best in the world, hands down.’ That’s aviation expert Alex Macheras’s verdict on the QSuite business class cabin 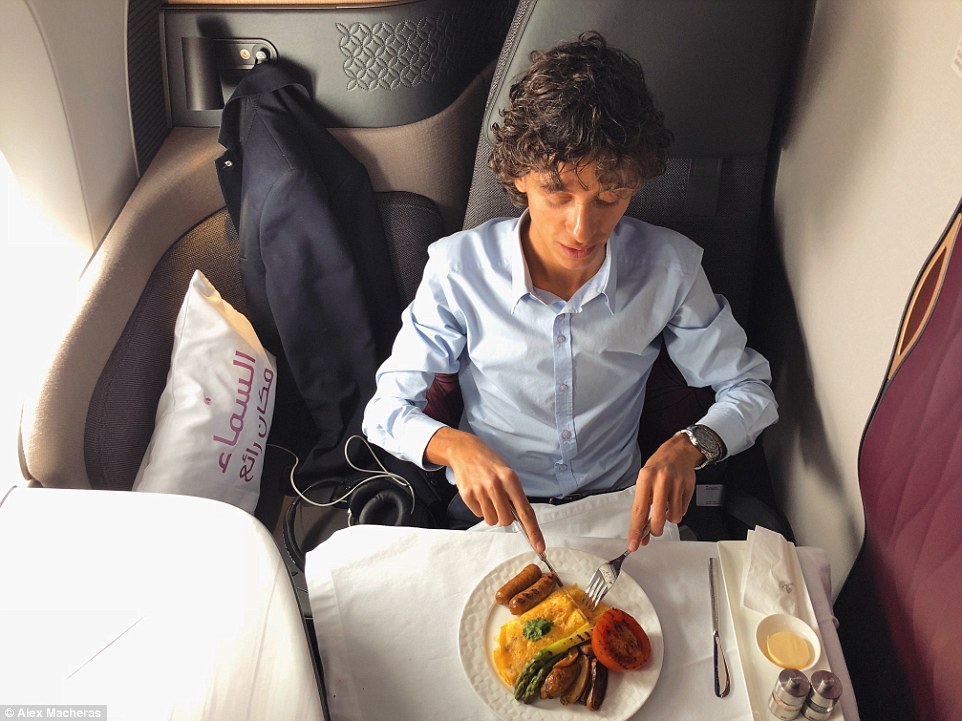 Mr Macheras flew on the delivery flight of the A350-1000 from Airbus HQ in Toulouse, France, to Qatar’s HQ in Doha, at the end of February. And he had a very comfortable flight indeed 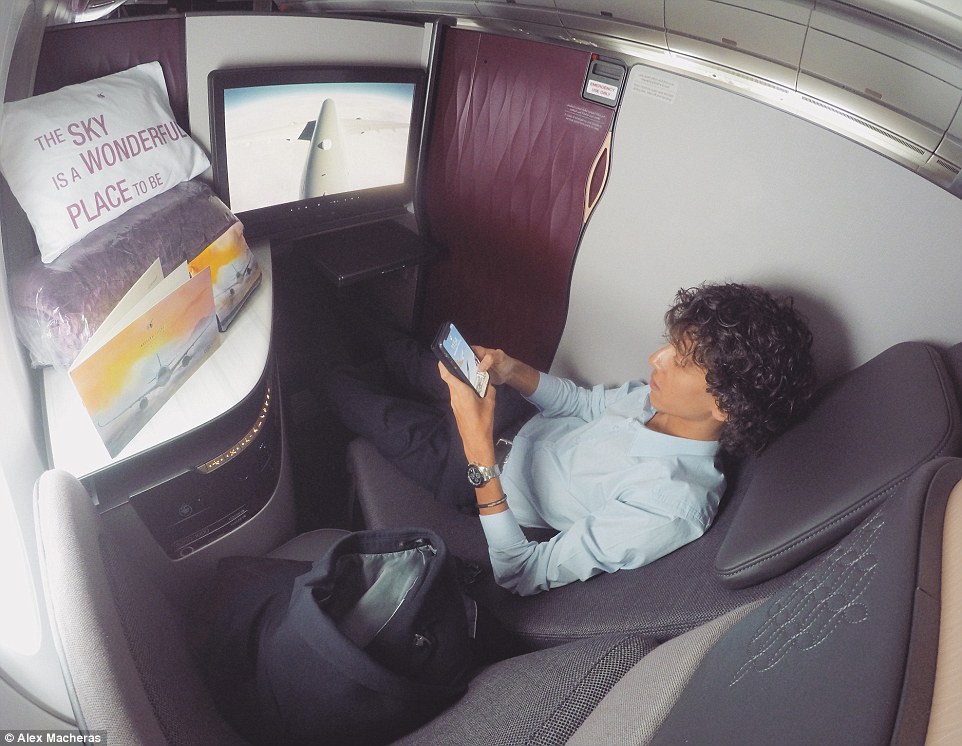 Mr Macheras, from London, told MailOnline Travel: ‘For me, the levels of privacy QSuite offers is second-to-none’

His seat was 8J, a single seat, but he was able to put the first-in-the-world double bed suites to the test, too – and economy class – because the fact that it was a delivery flight meant he had free-reign of the aircraft.

The double beds are formed by reclining two middle seats into flat beds, with partitions creating a private bedroom with two entertainment screens inside.

Mr Macheras, from London, told MailOnline Travel: ‘For me, the levels of privacy QSuite offers is second-to-none, especially given that it’s business class. It’s an incredibly well designed, detailed design.

‘In single suites, the closing door ensures a lot of privacy, and is tall enough to ensure you can’t be seen by passing passengers or crew members.

‘In quad seats, partitions open up meaning four people can face each other, or two people can lower the middle partition to sleep in a double bed. The double bed option is what impressed me the most, as it becomes a very wide bed, wider than some hotel beds.’ 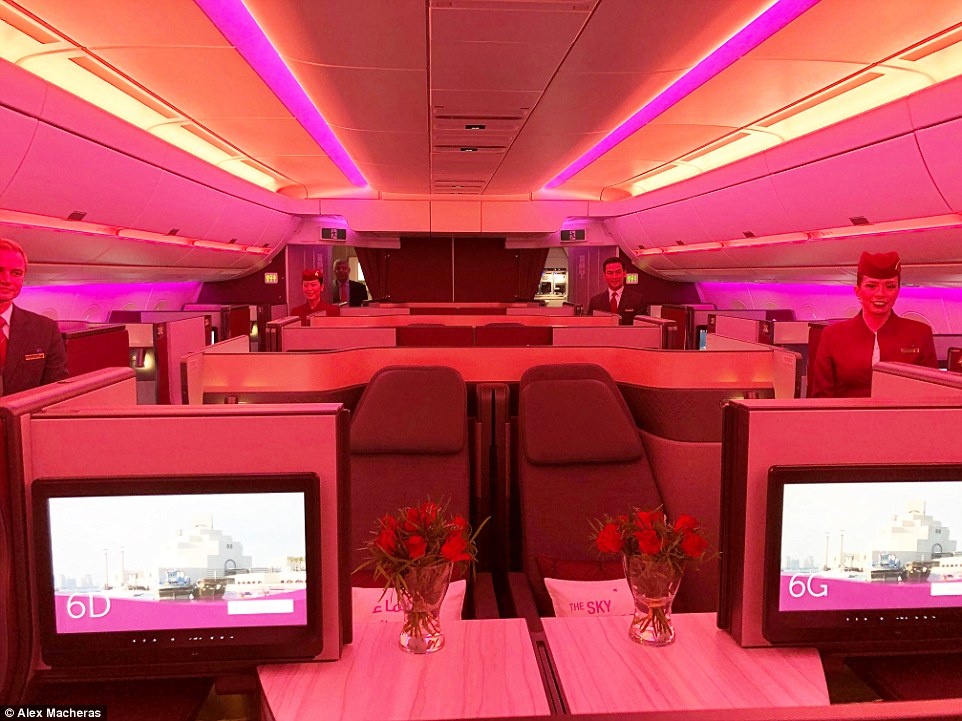 The double beds are formed by reclining two middle seats into flat beds, with partitions creating a private bedroom with two entertainment screens inside 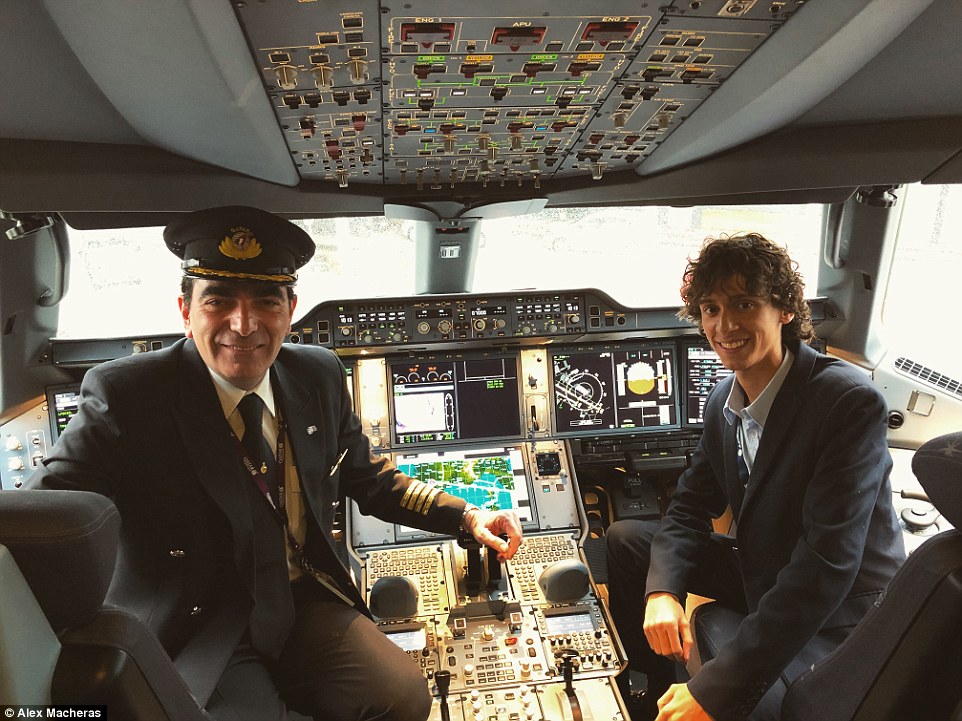 As the flight was a delivery flight, Alex was given free reign to explore – and was allowed in the cockpit before and during the flight 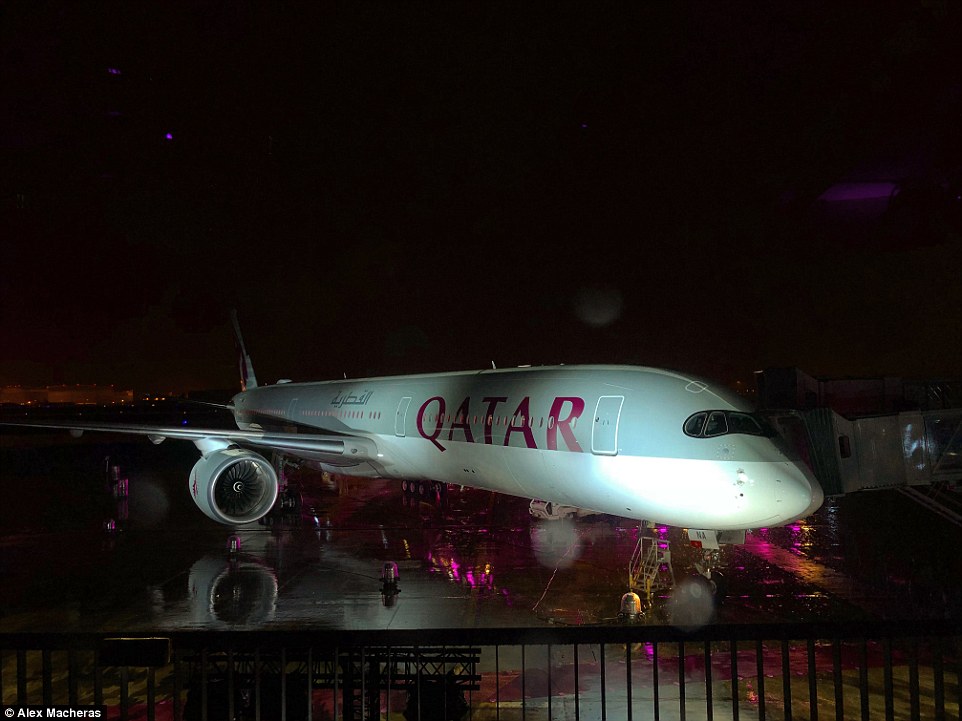 His praise continued, with a hat tip for the feel of the materials, too.

He said: ‘The world’s top aircraft interior designers created what is now a patented product that is elegant, luxurious and user-friendly. The surfaces are the same materials you would find in a five-star hotel. The leather is a premium leather from Italy. The screens are the most HD in the skies. Everything has been considered to ensure luxury.’

The mattresses, he added, are top notch.

He said: ‘They are super-comfortable, very thick, and the bedding ensures extra comfort. Pyjamas are also offered, and they’re designed by The White Company using materials to ensure your skin remains hydrated.’

The very frequent flier went on to reveal some of the ‘extras’ that will bring a smile to QSuite customers.

He said: ‘In business class, each suite has a “do-not-disturb” button, much like in a hotel room. This ensures that when the suite doors are closed, you’re free to relax in privacy.

There are also cameras installed on the tail and belly of the aircraft that allow a 360-degree outside view throughout the flight. It was particularly amazing when we were flying over Iran, given the stunning mountainous scenery. 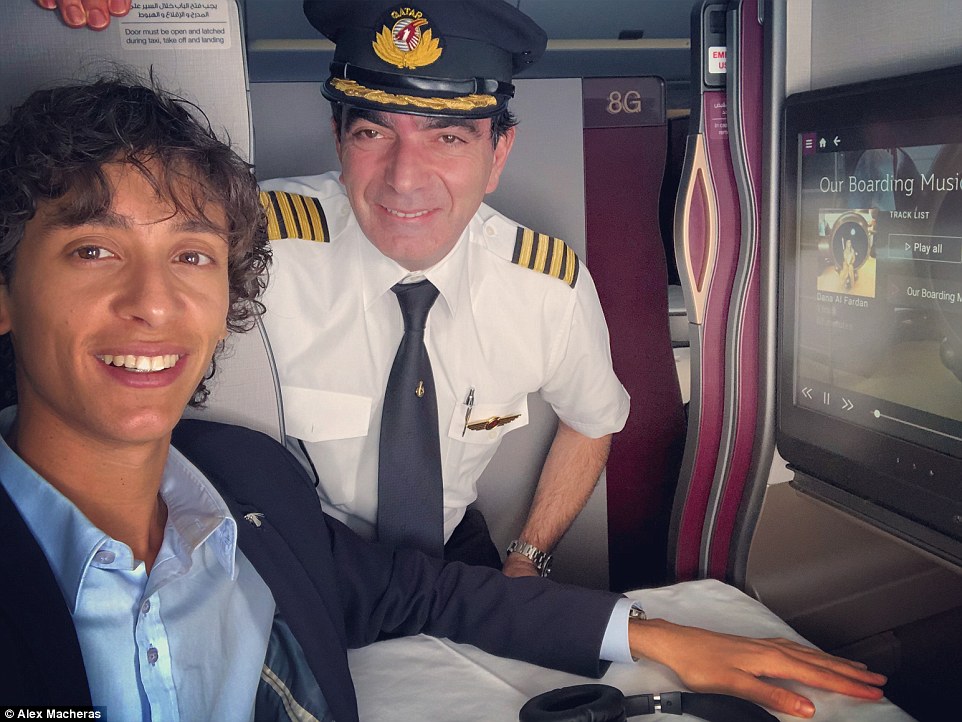 The captain drops in on Alex’s swanky berth – seat 8J. Alex’s verdict is that Qatar has a world-beater on its hands 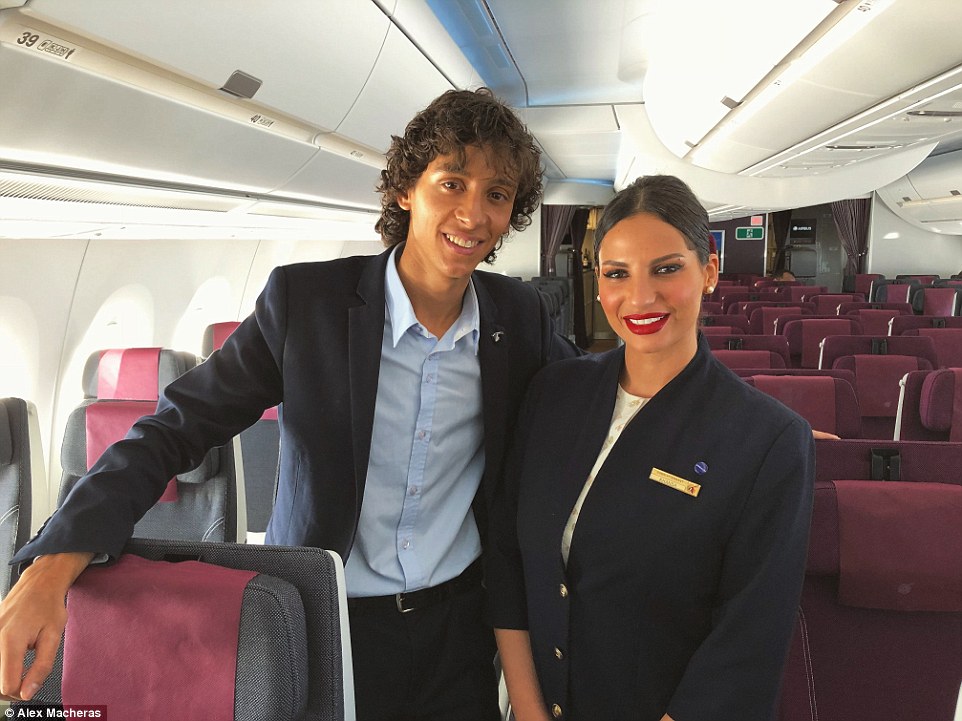 ‘Plus, the onboard internet offers high-bandwidth fibre optics delivering high-definition video to all passengers. Another cool gadget? Candle-lit dinners! Food is served with artificial “Arab design” candles, much like you would find in a high-end restaurant in Doha.’

Economy classed impressed him, too.

He said: ‘Economy class features the widest seats of any jetliner in this category. It feels very spacious. Inflight entertainment screens are large and the movies and TV options are enough for a few hundred flights – they change and update each month – and the head-rests are moulded on each side, meaning you can lean on both left and the right side of the headrest for comfort.’

MailOnline Travel has already reported that the A350-1000 features hospital-grade air filters and Mr Macheras noticed the difference this tech makes.

He said: ‘This new jet features an advanced air system technology that introduces fresh air into the cabin every two-to-three minutes, versus every 15 to 20mins on older jets. It means that when I fly A350-1000, my eyes do not feel dry, my skin remains hydrated… and I don’t have the dry feeling on my skin often associated with flying. The new air con setup is also very quiet, so there’s no need to shout over the “whooshing” noise.’

His verdict is that Qatar has a world-beater on its hands.

He said: ‘The attention to detail, luxury, and the ability to have double-beds in business class. QSuite flights are like no other.’