If a north-south divide really does exist, it was well in evidence on Monday as the Yorkshire based Emmerdale battled cockney soap EastEnders for the lion’s share of accolades at the 2022 Inside Soap Awards.

Leading the glamour at London’s 100 Wardour Street, Hollyoaks star Jennifer Metcalfe ensured she claimed her own share of the spotlight despite being absent from this year’s list of winners.

The actress, 39, joined a host of her soap cohorts including Lacey Turner, who picked up the All Time Icon Award, and Chelsee Healey, who was nominated in the Best Comedy performance category.

Jen – best known for her role as feisty Mercedes McQueen in the Channel 4 show – commanded attention in a form-fitting green dress with a daring thigh-high split as she greeted onlookers inside the exclusive Soho venue.

The Bradford native styled her look with a series of green accessories – including a belt and bag – as well as a pair of netted £730 Bottega heels, while styling her hair in a chic plait. 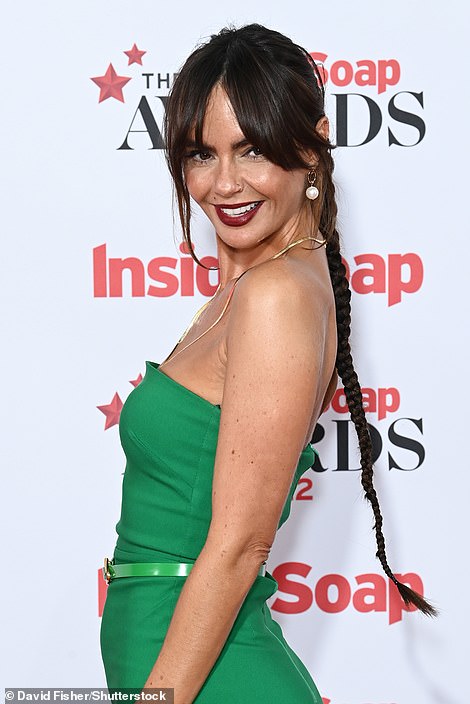 Green with envy! The actress, 39 – best known for her role as feisty Mercedes McQueen in the Channel 4 show – commanded attention in a form-fitting green dress 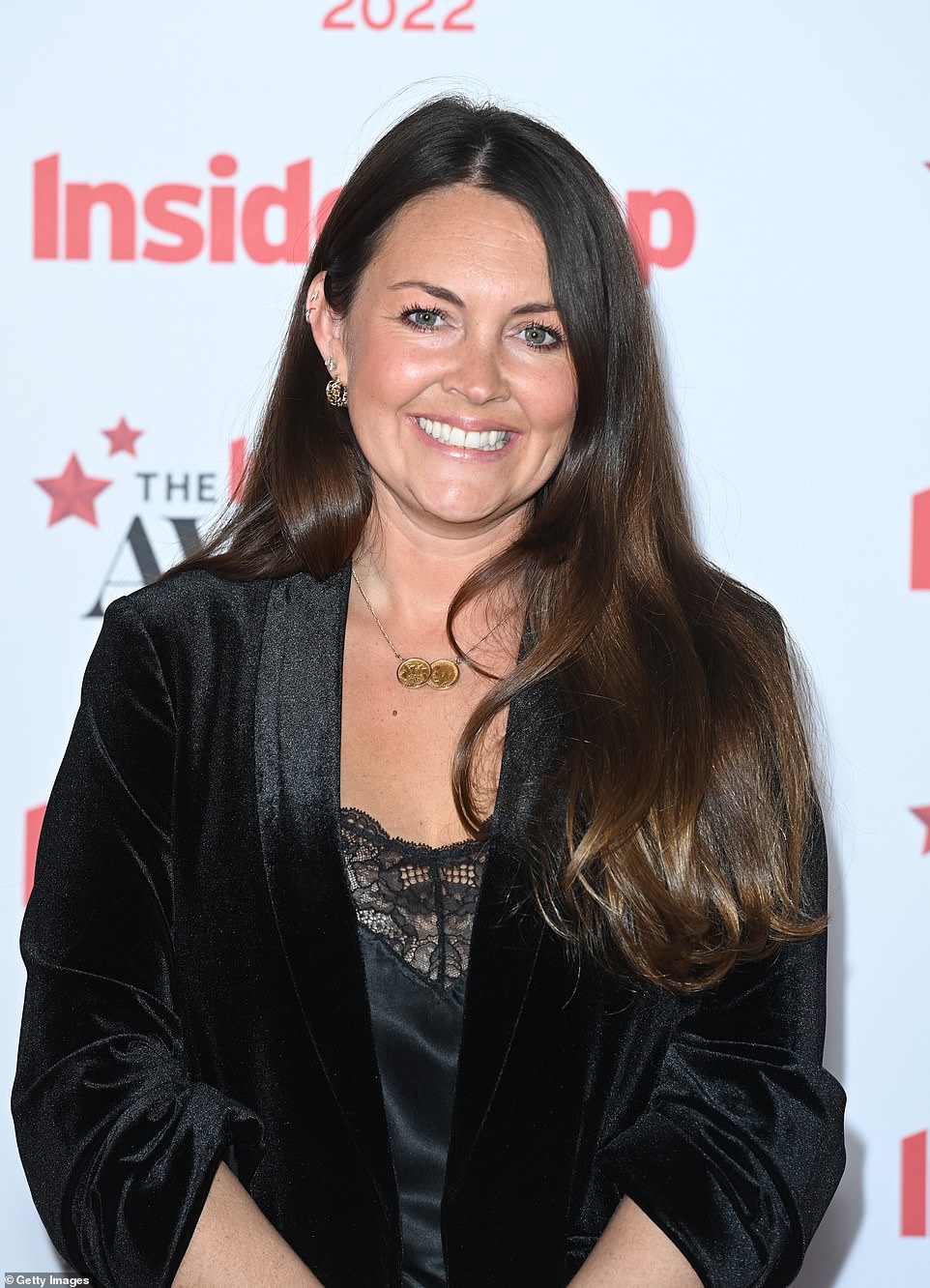 Sexy: The Our Girl actress styled the look with a black lace camisole and styled her brunette locks in a bouncy blown out style with a radiant coat of make-up in natural tones

The Our Girl actress styled the look with a black lace camisole and styled her brunette locks in a bouncy blown out style with a radiant coat of make-up in natural tones.

The see-through fabric revealed a lace bodice underneath, as Chelsee, 34, cheekily turned to flash a look at her backless dress.

The soap star wore her highlighted locks in a loose, style sleek and opted for a flawless pallet of make-up in bronze tones to set off her natural beauty. 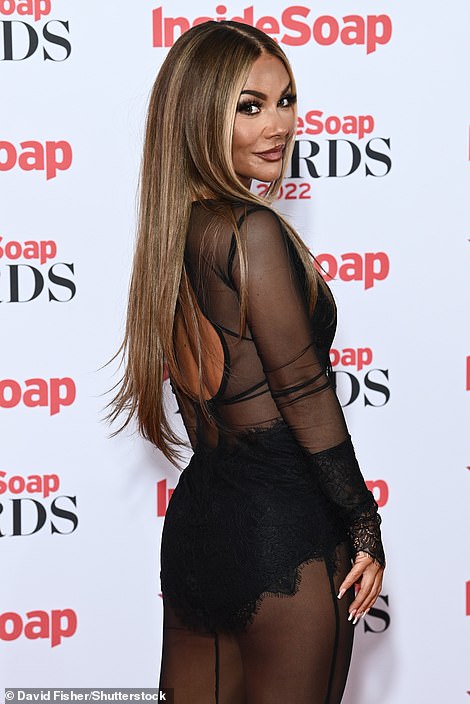 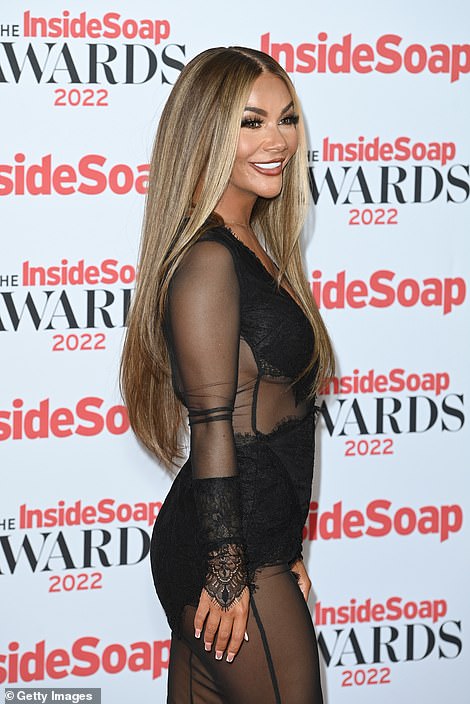 A natural! Chelsee worked all her angles as she posed for photographers on the red carpet

Also in attendance was Corrie actress Elle Mulvaney, who plays Tracey Barlow’s daughter Amy in the long-running soap, as she turned out to show support for the show.

Elle, 20, put on a very leggy display in a figure-hugging black dress which featured a daring slit up the leg, teamed with a pair of towering heels.

The battle between EastEnders, Coronation Street, Emmerdale and Hollyoaks has once again been reignited at this year’s Inside Soap Awards.

But it was soap stalwarts EastEnders and Emmerdale who snuck ahead in the rankings. 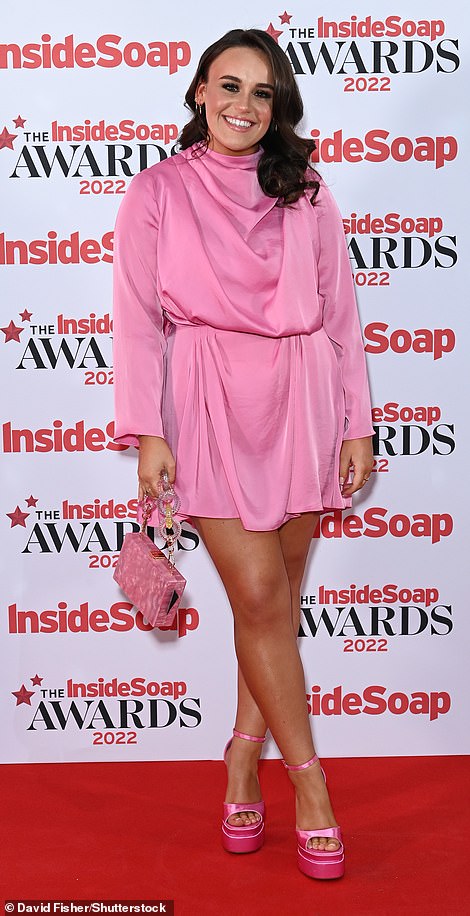 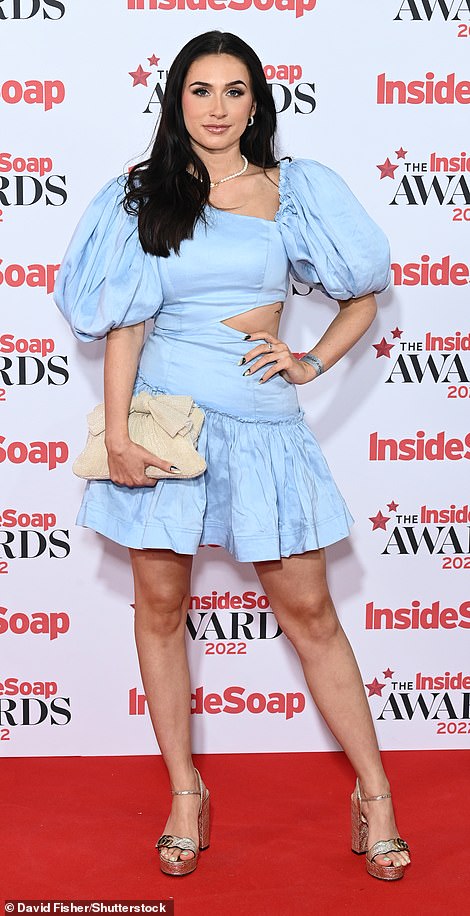 Perfect in pastel! Ellie Leach and Milly Zero both opted for pretty pale tones as they took to the red carpet

The popular shows fought it out for the best actor and actress accolades, among other honours, following a tumultuous year of drama-filled storylines.

The awards have also introduced a brand new category, as fans get the chance to vote for an All-Time Icon, where they can choose any soap star, from any show, who has made watching TV truly special for them.

The award was picked up by Stacey Slater actress Lacey Turner.

Voting opened in July for 16 different awards, and nearly 90,000 votes have so far been counted and verified.

With the Top Four nominees representing the cream of the crop in the world of soap and the leading contenders in categories including Best Actor and Actress, Best Newcomer and Best Comic Performance, Best Storyline and Best Family.

After Coronation Street bagged the top spot last year, and a slew of other awards alongside it – each contender has amped up the ante this year.

The reigning champions are hoping to scoop up some accolades, as the shocking sinkhole drama could take home the nod for Best Showstopper. 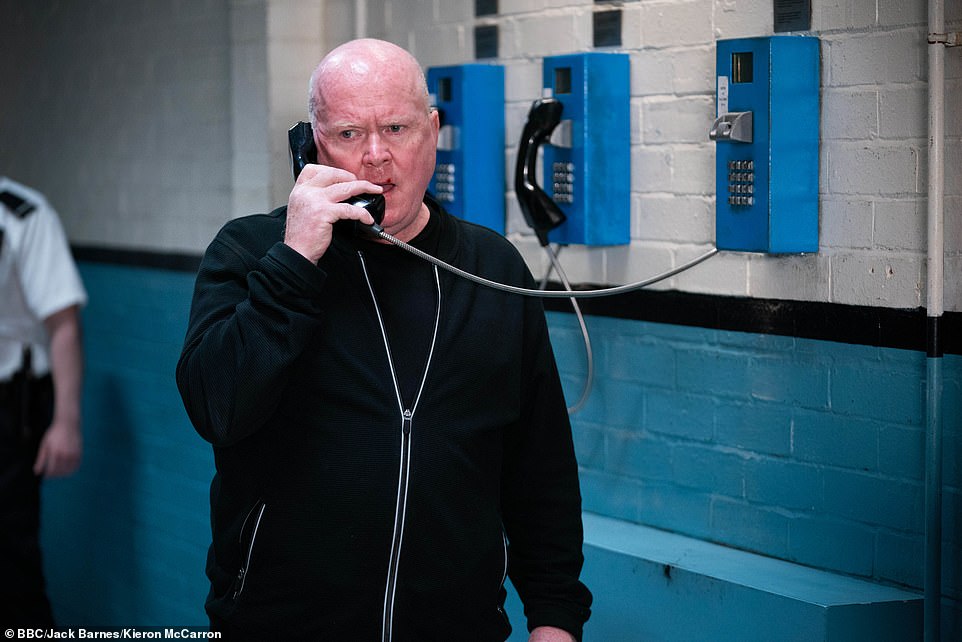 Battle on: The battle between EastEnders, Coronation Street, Emmerdale and Hollyoaks has once again been reignited at this year’s Inside Soap Awards (EastEnders’ character Phil Mitchell) 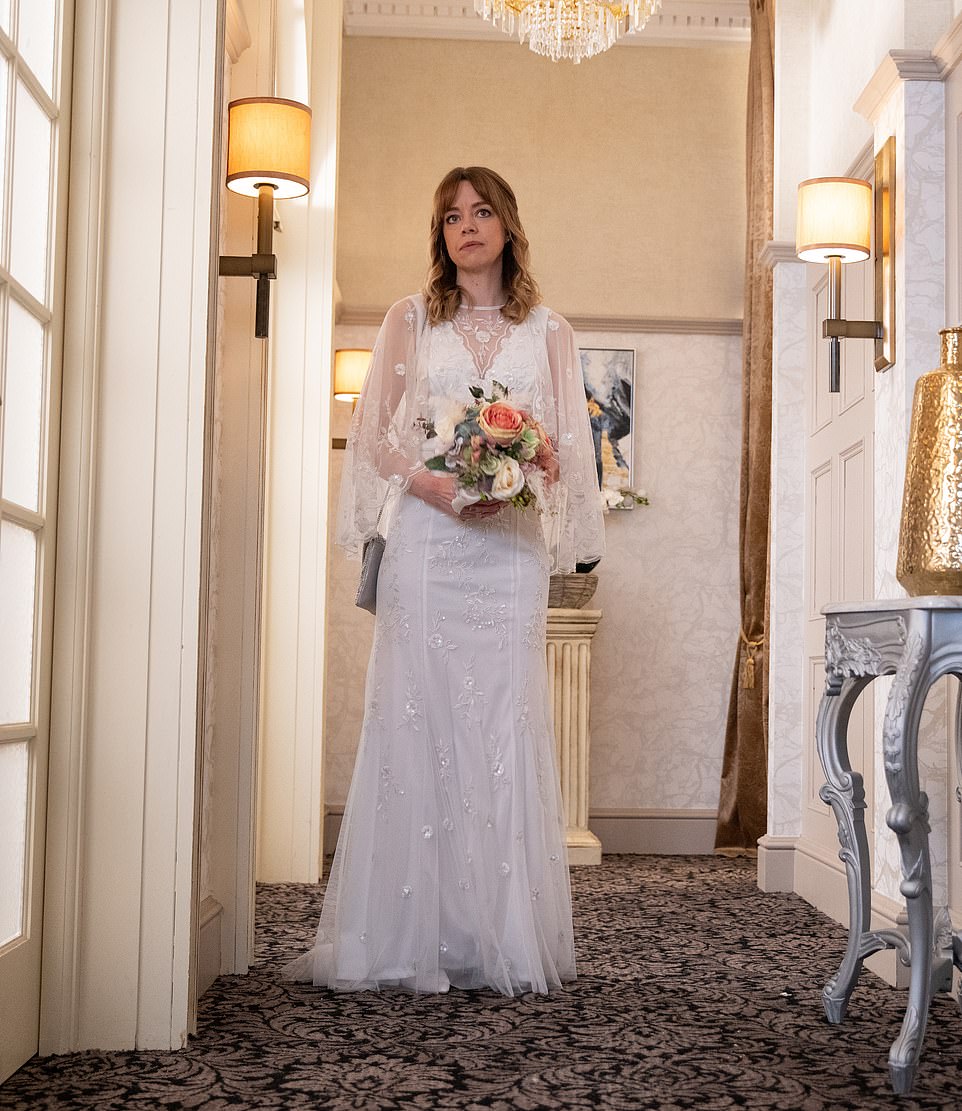 Accolades: The popular soap operas are fighting it out for the best actor and actress accolades, among other honours, following a tumultous year of drama-filled storylines (Character Toyah Battersby, Coronation Street)

Other dramatic moments in line for the award include Luke Morgan’s death in Mallorca in Hollyoaks and EastEnder’s Jane Slater’s trip to Southend.

Marlon’s stroke in Emmerdale has also been recognised in the category, as well as for Best Storyline, after the show aimed to raise awareness on strokes with the line. 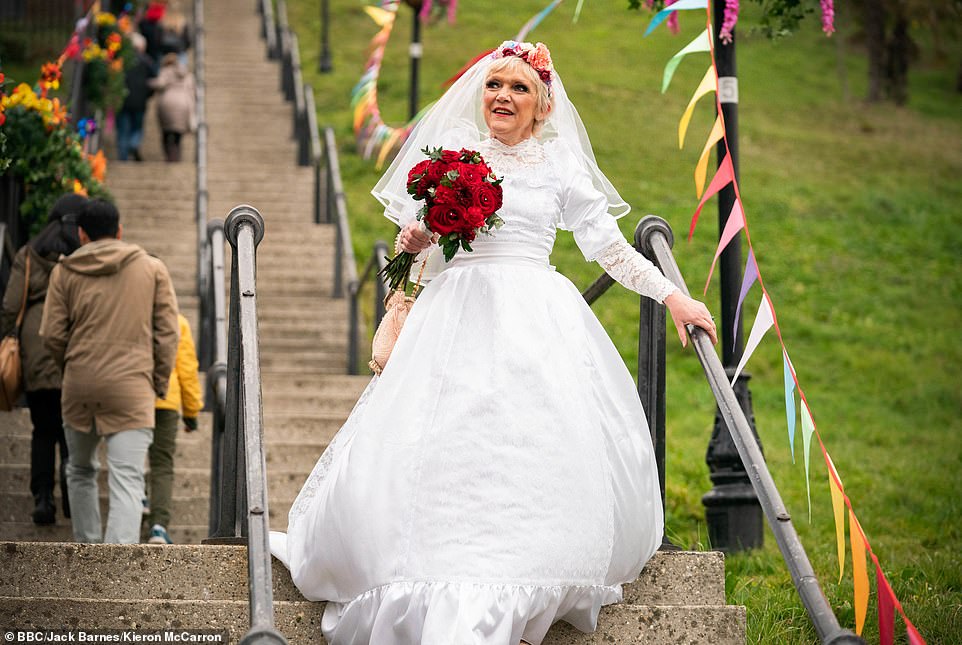 Recognition: Gillian Wright (pictured) is up for two prizes this year – following her heart-breaking storyline which saw character Jean Slater battle her demons before being sectioned

Hollyoaks’ actress Harvey Virdi has secured a nomination for Best Actress after harrowing scenes saw her character Misbah Maalik come to the realisation that Ali Shahzad (Raji James) had raped her.

And actress Gillian Wright is up for two prizes this year – following her heart-breaking storyline which saw character Jean Slater battle her demons before being sectioned. 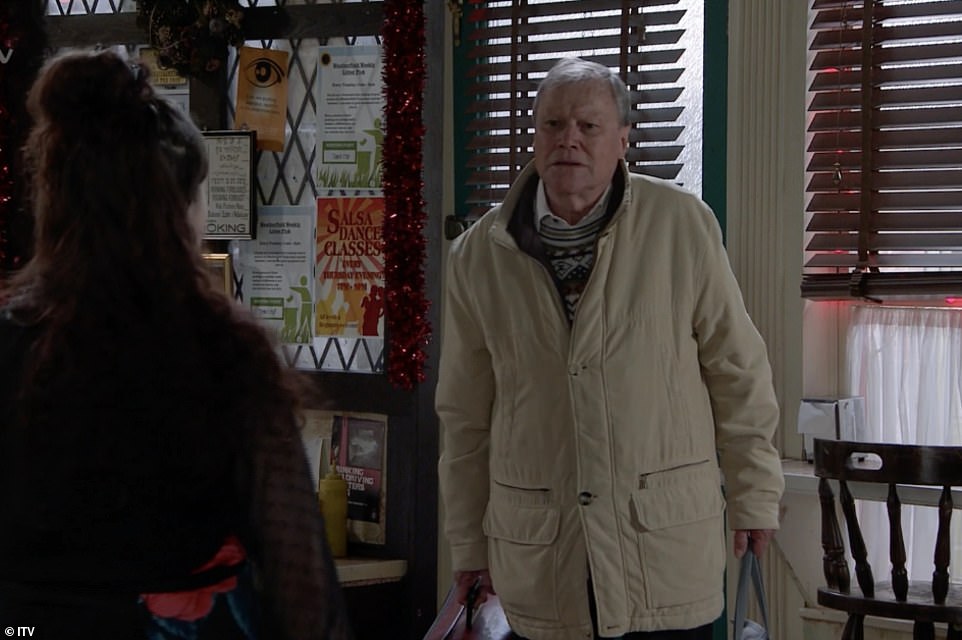 EastEnders’ Charlie Brooks (Janine Butcher) has made her mark once again as she’s up for the Best Villain award, where she will be up against Maximus Evans (Corey Brent, Coronation Street).

For the Best Family accolade, The Platts (Coronation Street), The Slaters (EastEnders), The Dingles (Emmerdale) and The McQueens (Hollyoaks) are set to battle it out.

Elsewhere, Doctors, Home and Away and Neighbours – which saw its last ever episode air in July – are also up against each other as they hope for Best Daytime Soap.

As the Inside Soap Awards celebrate 30 years, the new All-time Icon category is hoping to name ‘TV’s ultimate drama magnet’.

Gary Gillatt, editor of Inside Soap magazine, said: ‘Even in a world of battling streaming services, the soaps remain the most-watched shows on TV, and their main characters the biggest stars in Britain.

‘To celebrate 30 glorious, ridiculous years of Inside Soap, we’re offering our readers – the best-informed viewers there are – this chance to celebrate the absolute best of the best. We’re looking to name TV’s ultimate drama magnet. The soap icon above all icons.’