Inside the £80-a-ticket swingers club in Exmoor National Park

More than 40 sex-hungry punters packed into an £80-per-night swingers club in one of Britain’s most beautiful national parks on Saturday as the venue continues to feel the wrath of locals.

Adventurous twosomes and saucy single women wound their way through the country lanes of Exmoor to join a late-night sex party at The Croydon Hall Hotel, which has eight ‘playrooms’ indulging a variety of tastes.

The venue, which hosts the private sex club, is currently under investigation by the Exmoor National Park Authority over concerns that the venue may not have proper planning permission for its activities. 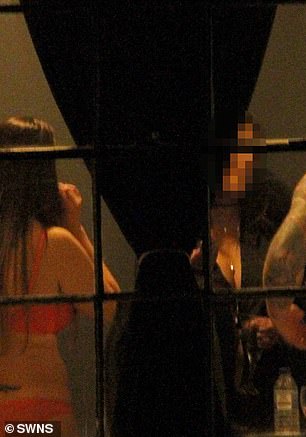 And residents in the sleepy village of Rodhuish in Somerset, where the hotel is located, are ‘sickened’ by the ‘Disneyland for adults’ that has sprung up. One says he has been forced to leave the village since the sex events began.

‘People come to Exmoor on holiday and they do not expect to stumble across a sex club in this beautiful area. It makes me feel sick,’ said Anne Pitts, 66, who moved to the area nine years ago, told Mail Online.

When MailOnline visited Rodhuish, 20 miles from Taunton, on Saturday, the hotel was hosting a sex-themed night entitle, ‘Naughty Girls Rule’, which is marketed under an image of one woman passionately kissing another’s breast.

The event proved a popular attraction with more than 40 patrons – mostly couples, one foursome and a handful of single young women – attending the sex party.

But their outfits didn’t stay on for long. At the windows of the old manor house, women dressed only in their black underwear could be seen frolicking and cuddling each other, while men stripped to their boxer shorts and sipped glasses of wine with female guests wearing only their bra and pants. 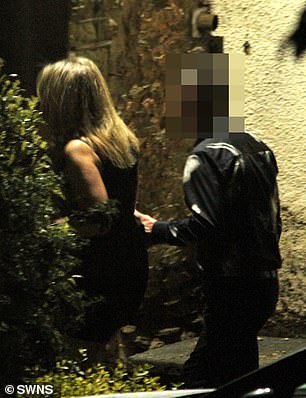 One local says he has been forced to leave the village since the sex events began. Pictured: Attendees arriving at Saturday’s event

One woman appeared to be binding another’s wrists.

A male patron, who left the venue at 2am with three friends, told Mail Online they had enjoyed ‘a lovely evening’.

When asked if the location was appropriate for sex parties his female companion replied giggling: ‘No!’ Before hopping into the car, slamming the door and sweeping out of the car park into dark, narrow roads that criss-cross the Somerset countryside.

To attend the events, which are organised by Exclusively Silks, patrons must become members for £60-a-year and they pay additional fees for events, which include ‘Trio Night’, ‘Fetish Party’ and ‘Discovering Swinging’.

Prospective guests are asked to complete a questionnaire about their body shape, tattoos, piercings and their sexual interests, including whether they prefer to have sex with others in front of their partner, or in a separate room.

They are also invited to disclose if they enjoy bondage or S&M, and if they are happy to be filmed having sex or would like to perform on a special stage set up within the hotel to thrill other guests.

However, the members may have to make the most of the club while they can since the Exmoor National Park Authority has said it is considering enforcement action against the venue over its planning concerns.

Dean Kinsella, head of planning and sustainable development at the authority, said: ‘The alleged breach is that the building is being used for a mixed use as a hotel/ private members’ club.

‘We are currently in the process of preparing an enforcement notice, as we consider that a change of use of the hotel has occurred.’ 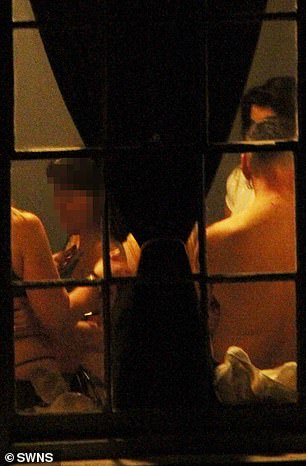 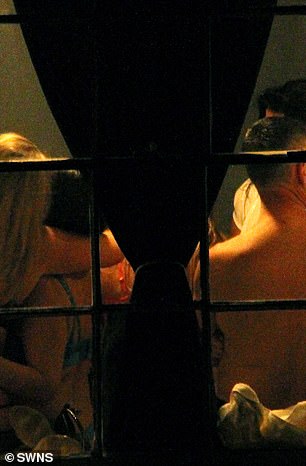 The venue, which hosts the private sex club, is currently under investigation by the Exmoor National Park Authority over concerns that the venue may not have proper planning permission for its activities

At the same time, residents are fiercely opposing a licence application filed by Exclusively Silks’ owner Allen McCloud with the Somerset West and Taunton Council’s licensing sub-committee. If approved, the application would see the hotel given permission to serve alcohol until 4am every night.

Neighbours are particularly concerned by the disruption caused by randy revellers coming and going until four in the morning and the risk posed by heavy traffic on the tight lanes of the national park.

And they fear their problems are only going to get worse as the numbers attending sex events swell in the summer and the passionate parties move outside into the stunning grounds and pool area.

‘People are going to go outside, it’s going to happen,’ said Paul Bateman, 69, who says the arrival of the private sex club has been too much for him and he and his wife are set to move in June after 17 years in the village.

‘When the better weather comes, who knows what is going to go on?’ 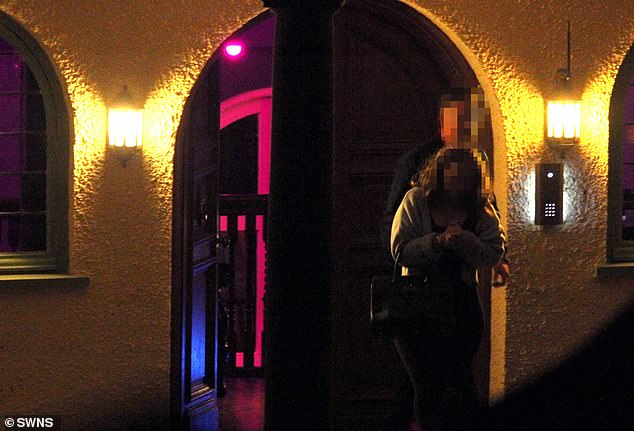 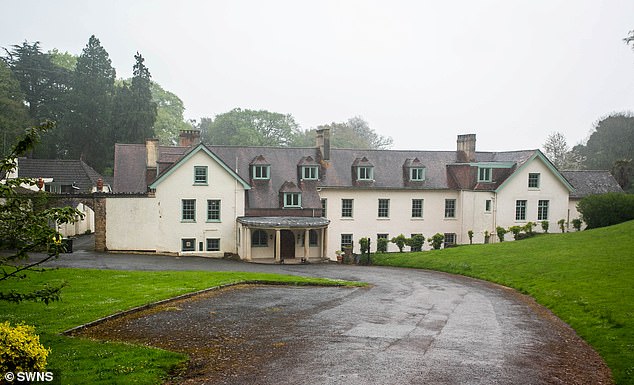 Croydon Hall Hotel began advertising sex parties earlier this year, but residents claim only two, including one on Saturday, have gone ahead

The district council is set to discuss the Mr McCloud’s licence application at a meeting on Monday [April 29] and residents are expected to turn out in force.

‘The hotel says online it has 80 parking spaces but there are not,’ said Mr Pitts, who is also concerned the hotel will host stag and hen parties. ‘The access is narrow and steep so we have the noise from revving engines and people shouting. We are disturbed on and off for three hours in the middle of the night.’

Eight houses are in close proximity to the hotel and the whole village is made up of just 293 residents.

Croydon Hall Hotel began advertising sex parties earlier this year, but residents claim only two, including one on Saturday, have gone ahead.

The hotel has converted some of its bedrooms into ‘playrooms’, including The Red Room, picking up on the bondage theme popularised Fifty Shades Of Grey, by EL James. The Red Room is equipped with paddles, whips and a sex swing and it can be reserved for £120. According to villagers, some beds have stocks. 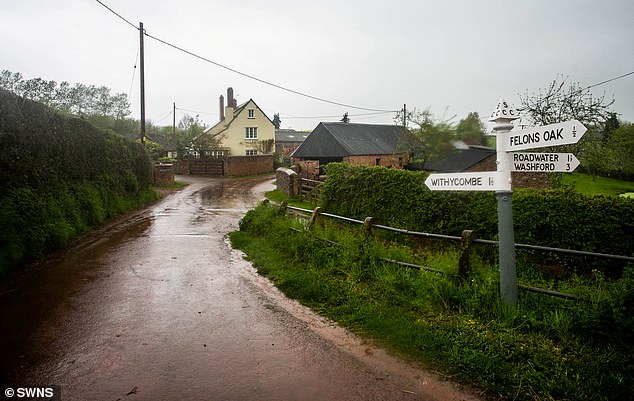 The hotel has converted some of its bedrooms into ‘playrooms’, including The Red Room, picking up on the bondage theme popularised Fifty Shades Of Grey, by EL James

S&M equipment, including whips, are featured on the Exclusively Silks website, which promises a ‘night of fun, passion and pure indulgence’.

Mr McCloud, 59, is a former BP mechanic and was one of 22 Britons to survive the Algeria hostage crisis in 2013, in which at least 39 foreign hostages were killed by terrorists linked to al-Qaeda.

He has denied claims that his guests are disrespectful of neighbours and says he has soundproofed the building.

He told The Times that his parties were attended by ‘consenting adults’, and said: ‘You have to have a special licence for sex things if you are selling anything sexual, like DVDs, but this is just a hotel. It’s basically Disneyworld for adults.

‘What people do in a hotel is up to them. They hire the venue for an evening where they have a dancefloor, a bar, and if they want to go up to the playrooms and have some fun, they can go and do that.

‘We went from eight to twelve couples and at our last party we had 75. We’ve got doctors and a barrister who comes. They are quite well-to-do and we have some nice sports cars parked outside. We’re a high-end club.’

If the hotel is found to be in breach of planning regulations, Mr McCloud will have 28 days to appeal or submit a new planning application to run his events.