Inside the abandoned hotels of the Borscht Belt: Where American Jews traveled to escape Antisemitism

A Brooklyn-born photographer says you’re not looking hard enough if you don’t see the incredible stories told in images of the abandoned American Jewish vacation resort of the Borscht Belt.

Marissa Schienfeld’s book The Borscht Belt: Revisiting the Remains of America’s Jewish Vacationland shows eerie images of what the place – regularly referred to as the Jewish Alps at its height of popularity – looks likes now.

The collection of hotels situated in the Catskills Mountains, New York, was photographed for a 2009 university project, decades after Jews first started using it as a getaway spot, but she admits many people didn’t understand why she was snapping pictures of derelict structures.

Grossinger’s poolside, Liberty, New York is pictured in 1977 at the height of popularity for Jewish Americans 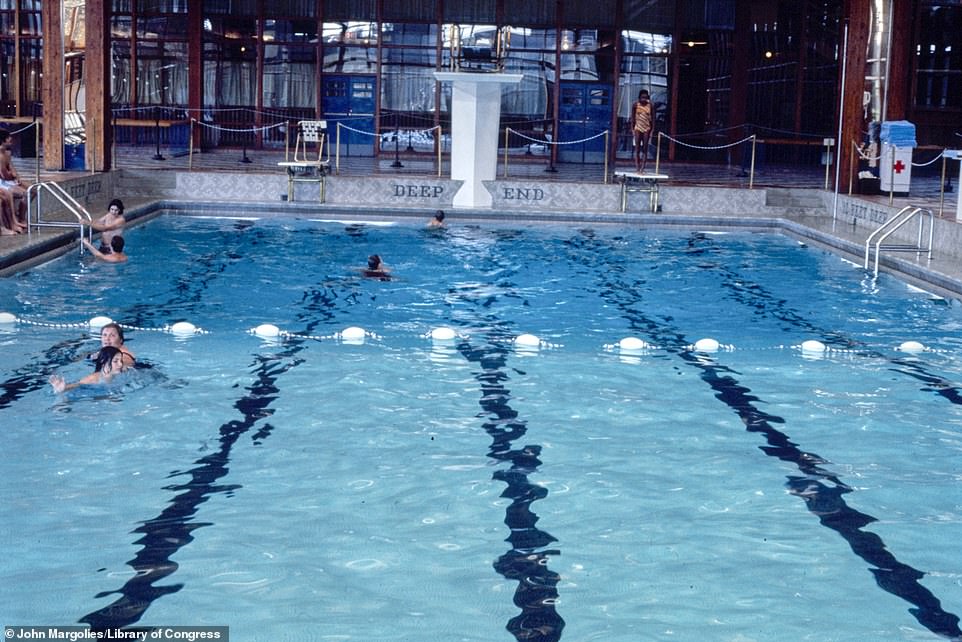 Grossinger’s Resort & Hotel, indoor pool looked like this in 1977 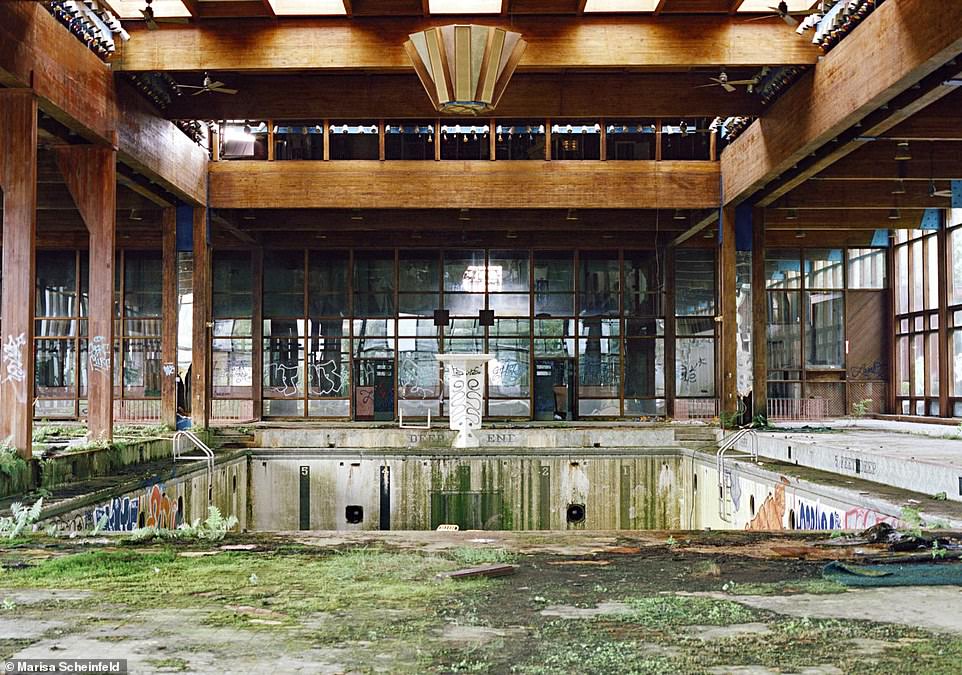 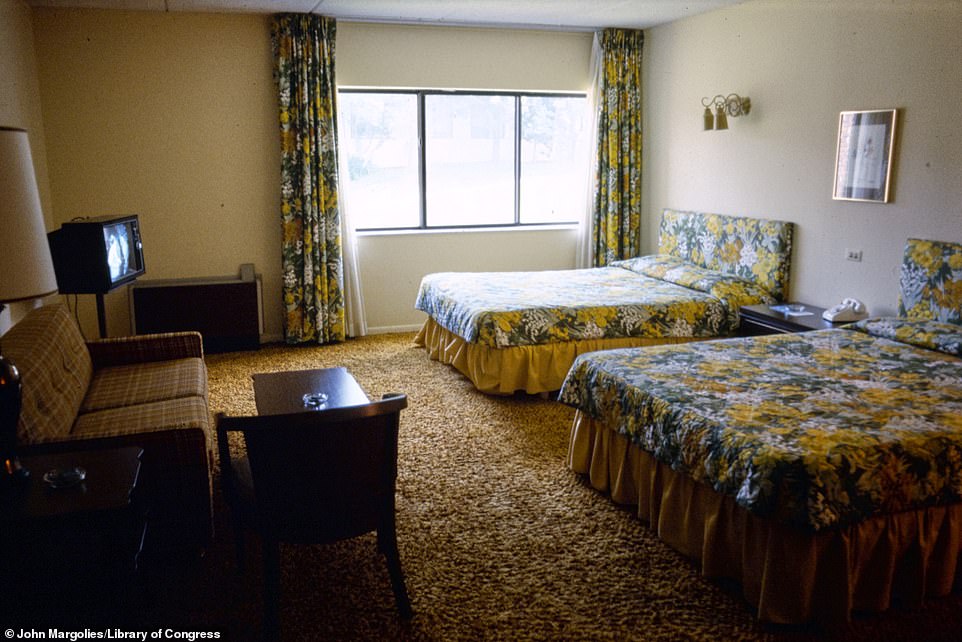 A Grossinger’s room is pictured in 1977 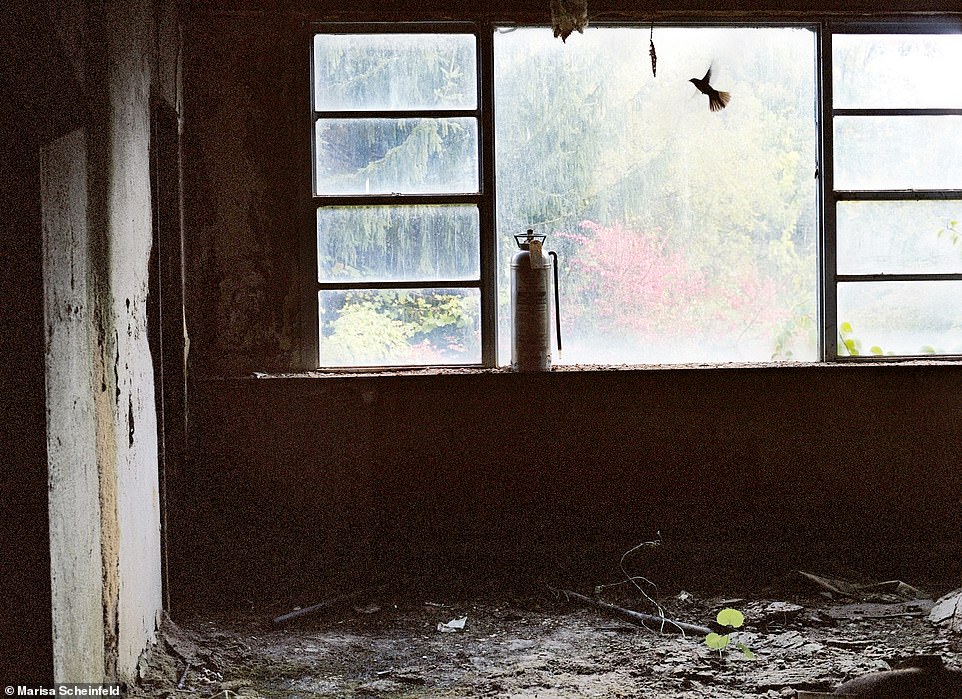 Now a guest room at Grossinger’s Resort and Hotel in the Catskills Mountains of Liberty, New York is abandoned

‘These photographs are like these still lifes arranged by time, change, Mother Nature, and other people who have been going in there to hang out, party, photograph, live, and steal,’ she told Huck magazine. ‘Most people didn’t understand what I was doing at first. I would often get the remark, “There’s nothing there. Why do you want to go there? You’re crazy.”

‘My answer is, “Well, you’re not looking.” None of these images are empty. Here are family histories, unions, marriages, and romances. You can see that these places are worn with life, even though they are worn with decay. There are histories of Jews in America creating a space born out of anti-Semitism.’

From the 1920s to 1970s while many Jewish people were not welcomed at mainstream hotels across the US, Schienfeld’s family was one of those who traveled upstate from New York City to enjoy the spot that went on to serve as the inspiration behind the famous Kellerman’s Resort in 1986 flick Dirty Dancing. 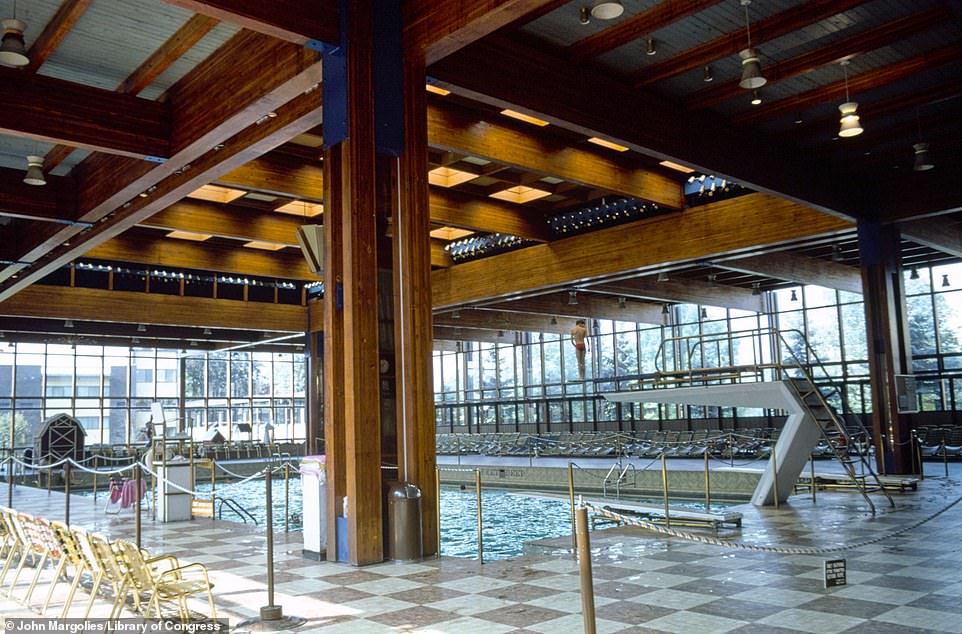 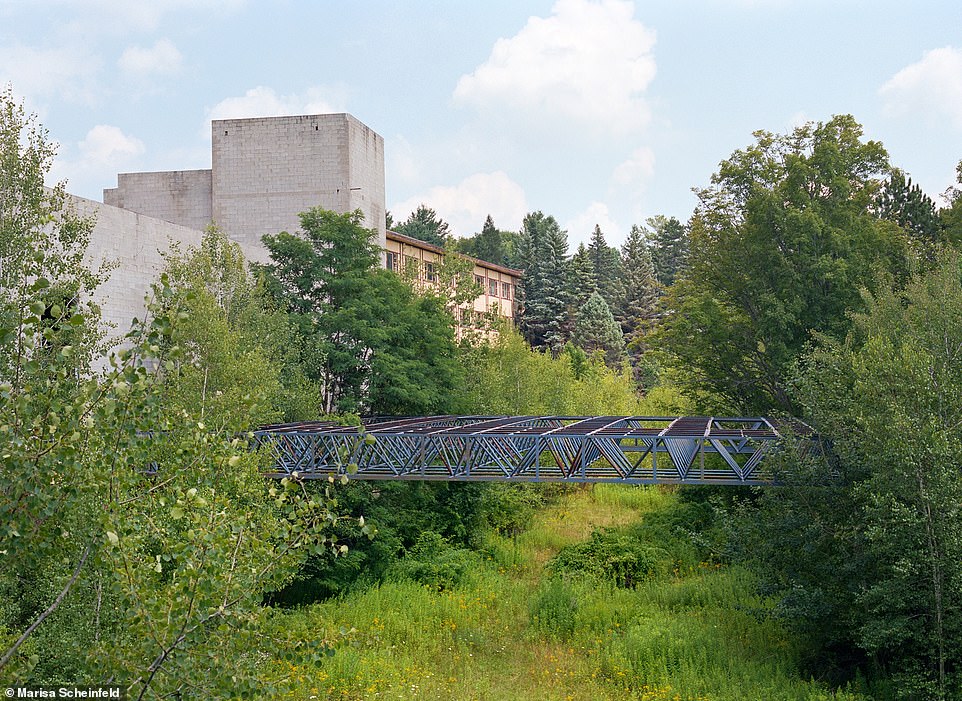 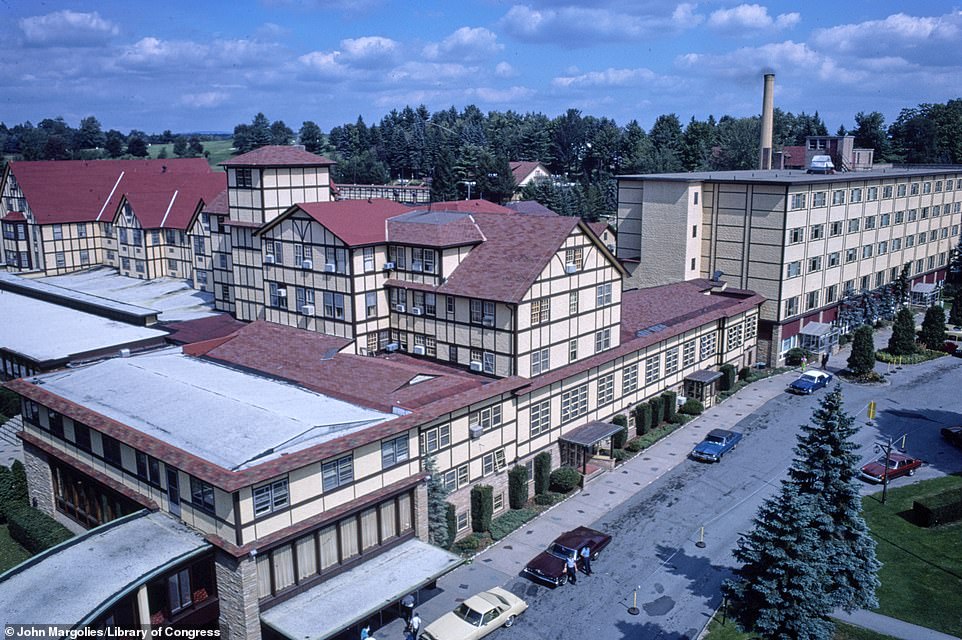 Grossinger’s is pictured from the outside in 1976 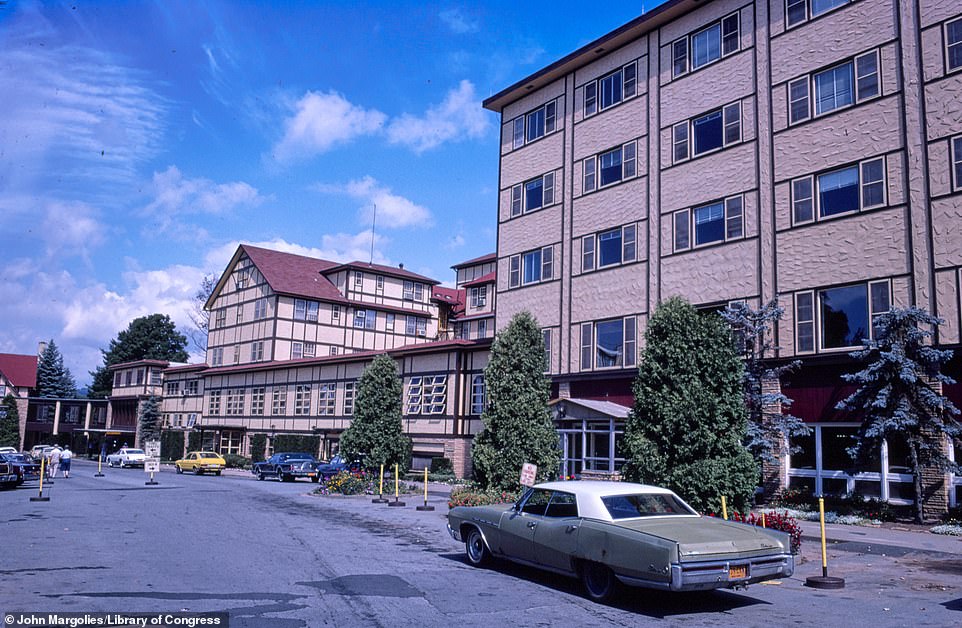 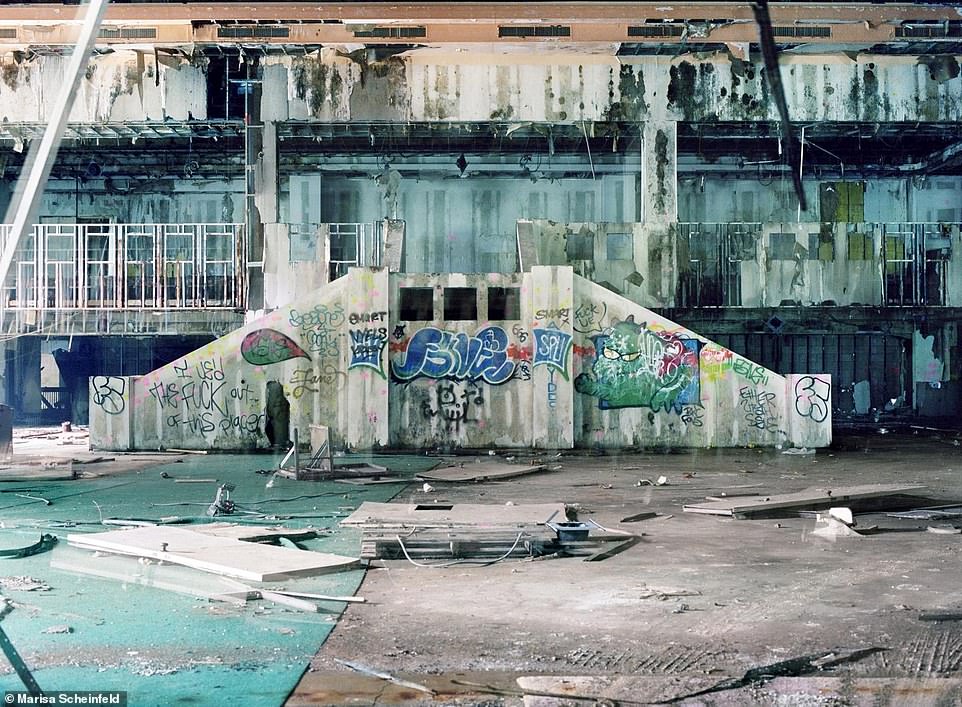 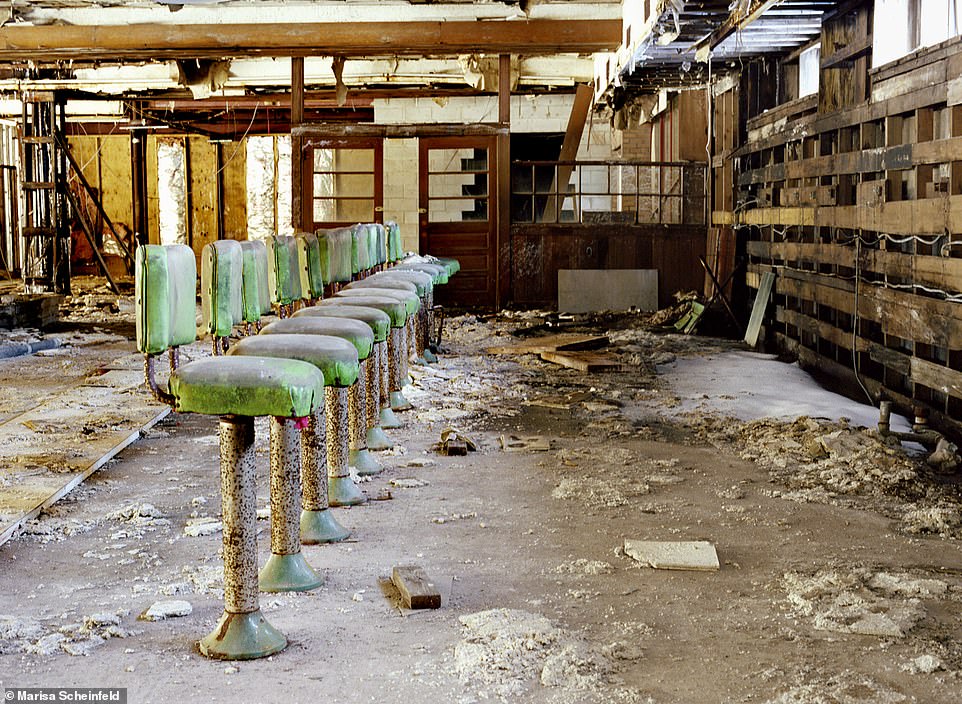 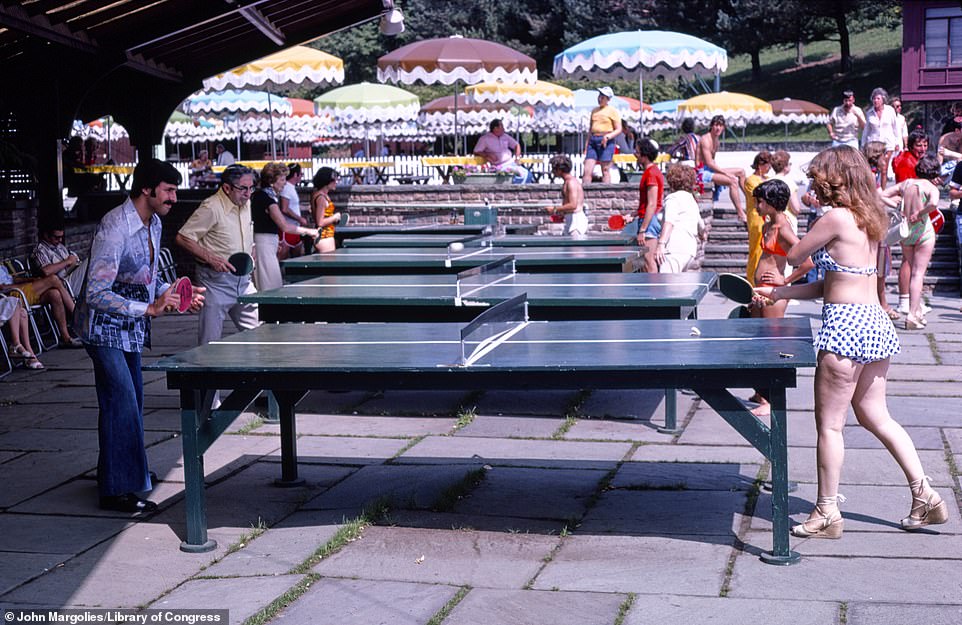 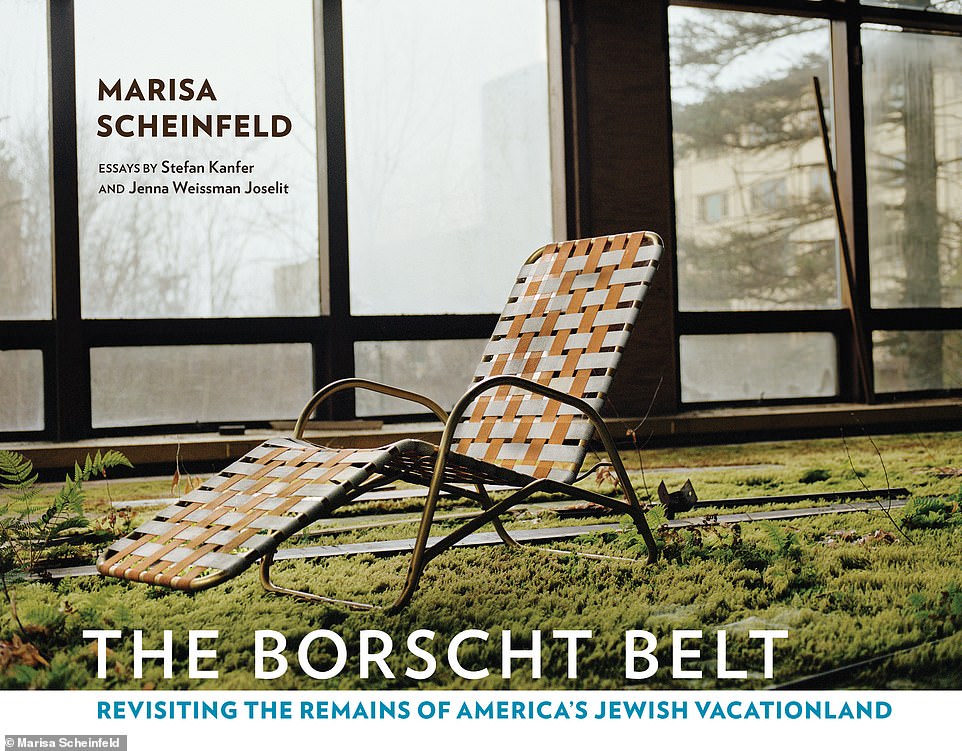 Images appear in new book The Borscht Belt: Revisiting the Remains of America’s Jewish Vacationland. Grossinger’s appears on the cover

The fictional resort is where Johnny and Baby developed a romance over dancing but scenes were created at the Mountain Lake Lodge in Pembroke, Virginia to develop a similar feel.

Scheinfeld’s photographs show the remnants of guest rooms, a hole that formerly housed a swimming pool, and the interiors of hotel lobbies etched in graffiti nowadays.

‘We moved to Monticello, New York, in 1986 when I was six years old. My grandparents owned a condo adjacent to Kutsher’s and we had access to the hotel,’ she continued to Huck.

‘We would go swimming and my grandpa played cards. It was like mini-vacations on weekends, where I would engage in the quintessential Borscht Belt activities like bingo and shuffleboard.’ 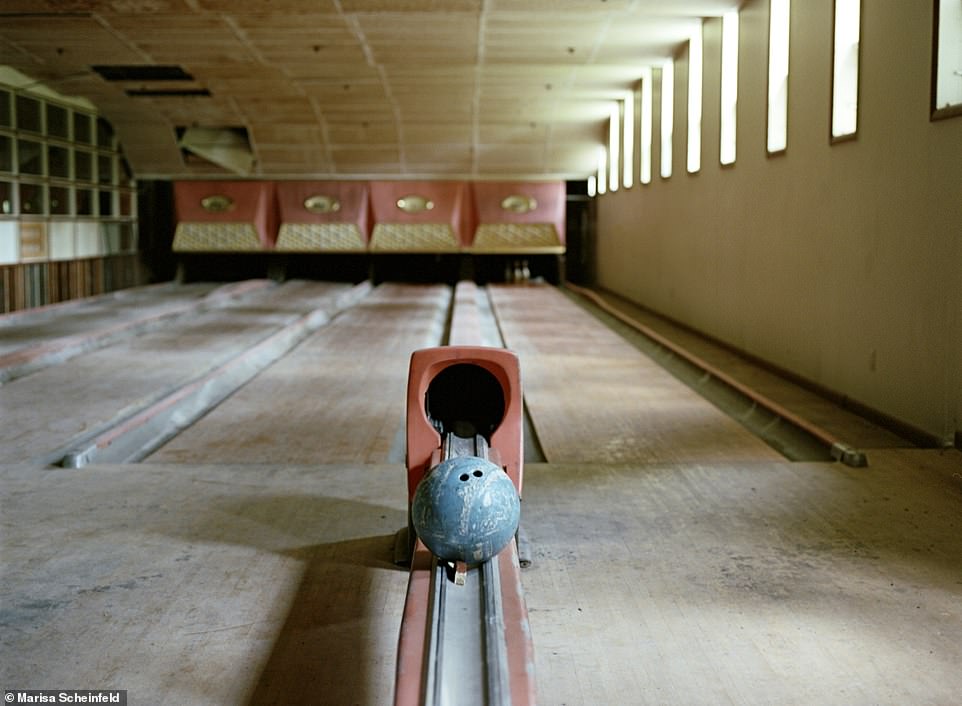 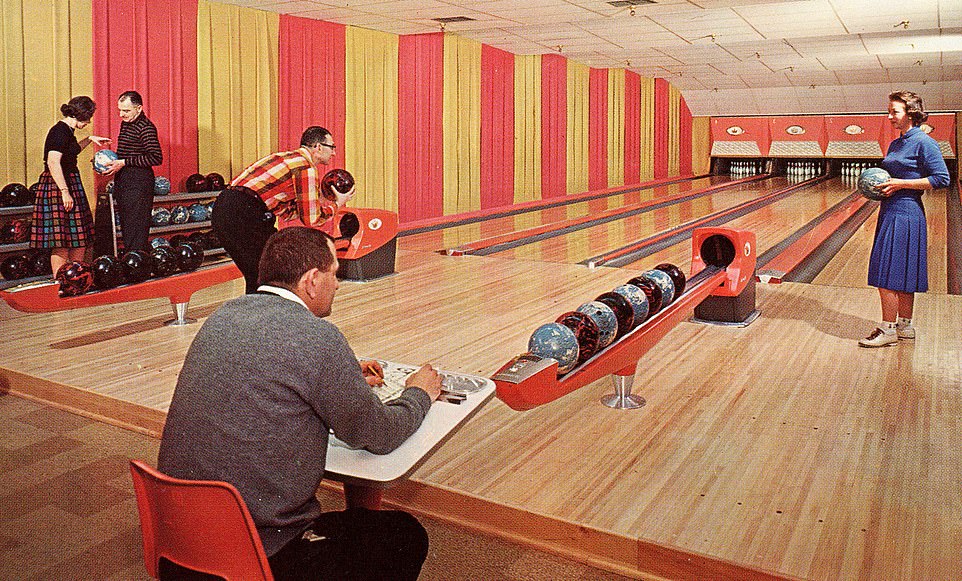 Circa 70s, the bowling alley at Homowack Lodge, Spring Glen 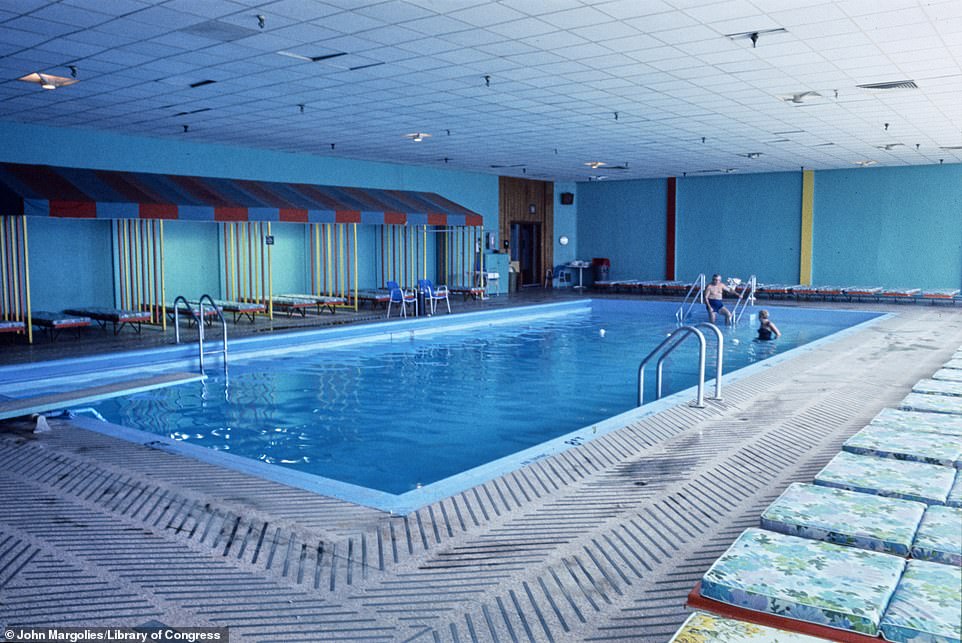 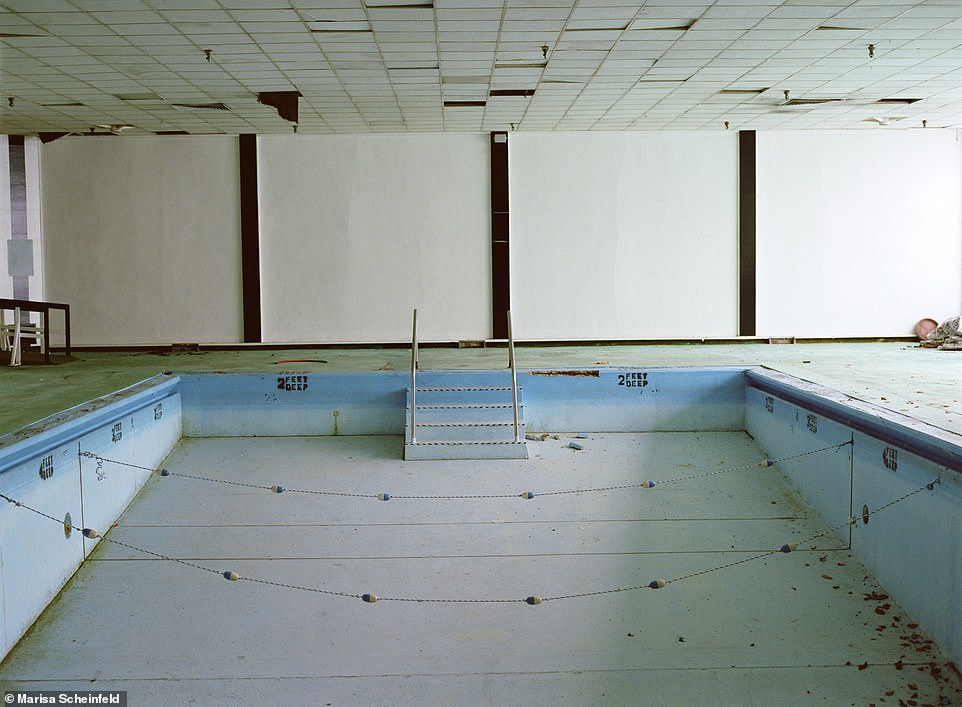 What the indoor pool at Homowack Lodge, Spring Glen looks like nowadays

She explained that her mentor, Arthur Ollman told her to ‘Shoot what you know’ and that sparked the photo series.

Schienfeld was astonished to find one hotel in particular, the Grossingers was nowhere near the place it once was.

‘That entire complex, which had its own airport and post office, it is gone. It’s a weird, strange place,’ she explained.

Adding about her process for deciding what to capture: ‘What would happen is I would go with my archival image and agenda, then stop in my tracks when I would see something that warranted to taking a picture of it — and that’s how the whole series evolved. I realized there was more of a story to tell.’ 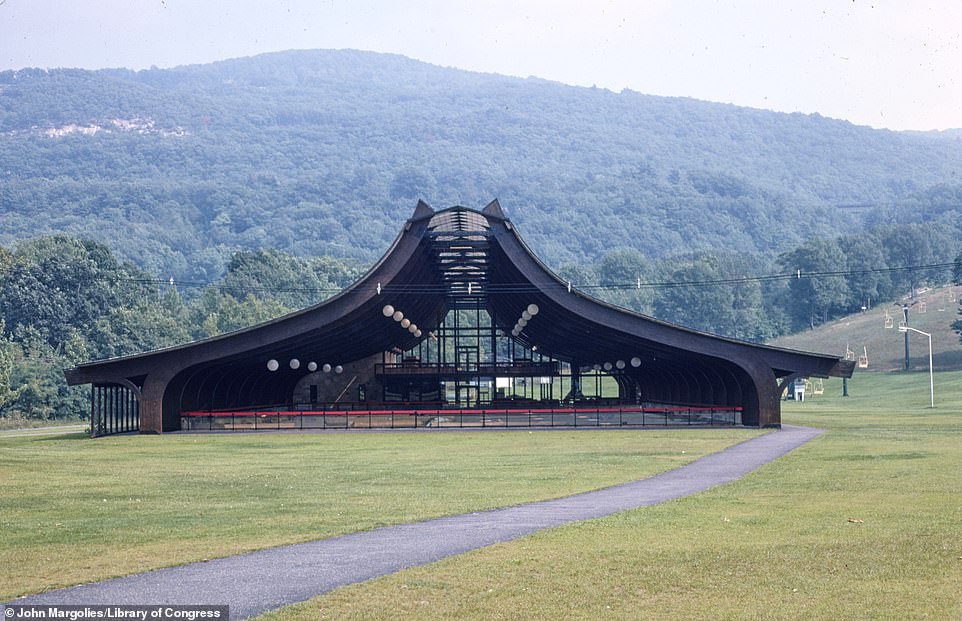 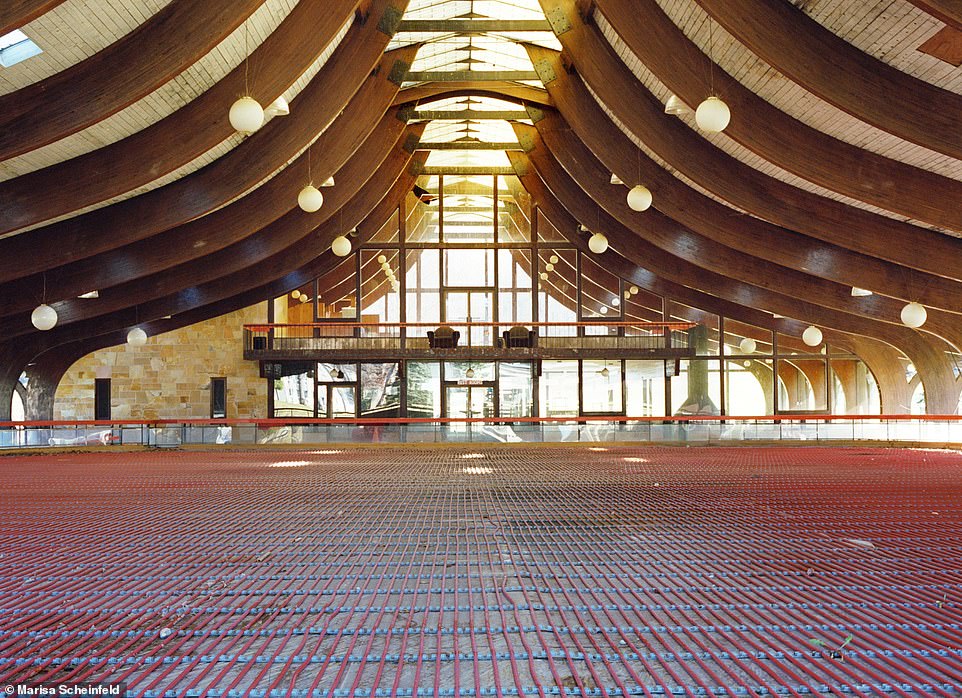 What the ice skating rink at Nevele Grande Hotel in Ellenville, New York looks like in Scheinfeld’s images 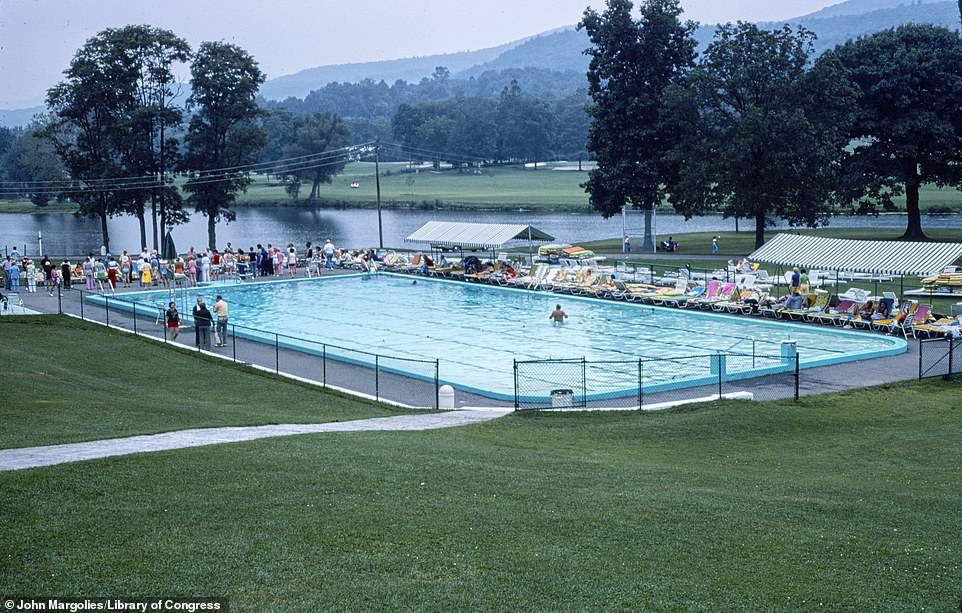 Nevele pool in Ellenville, New York of times past 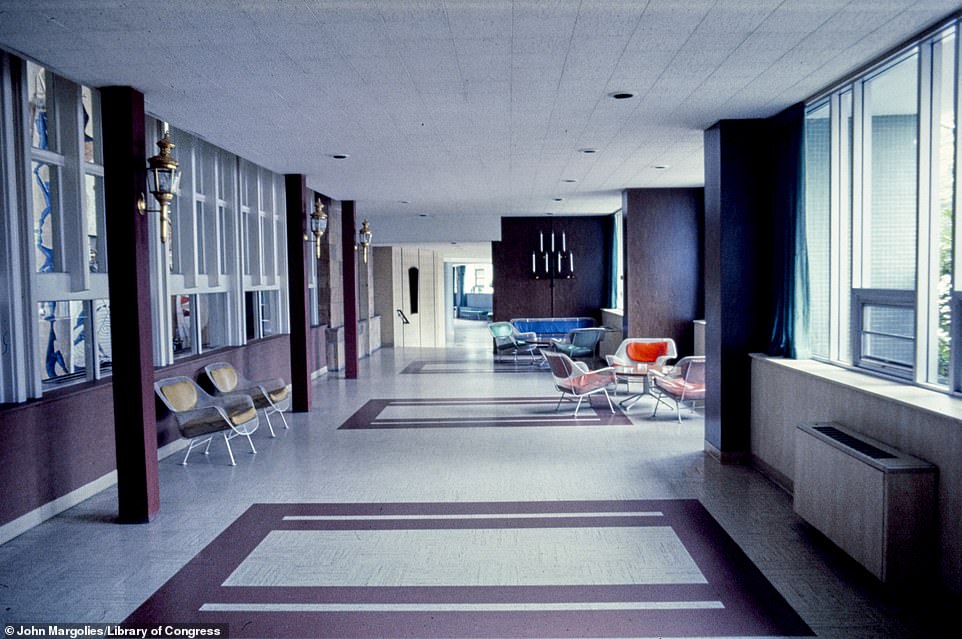 Nevele Grand Hotel lobby in Ellenville, New York in an image from 1978 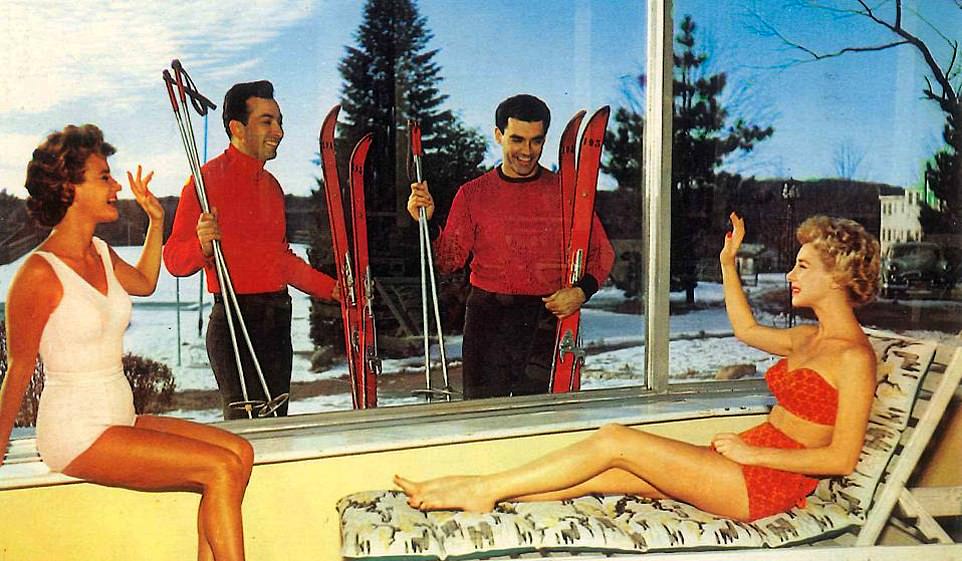 The postcard scene shows the ‘Jewish Alps’ decades ago 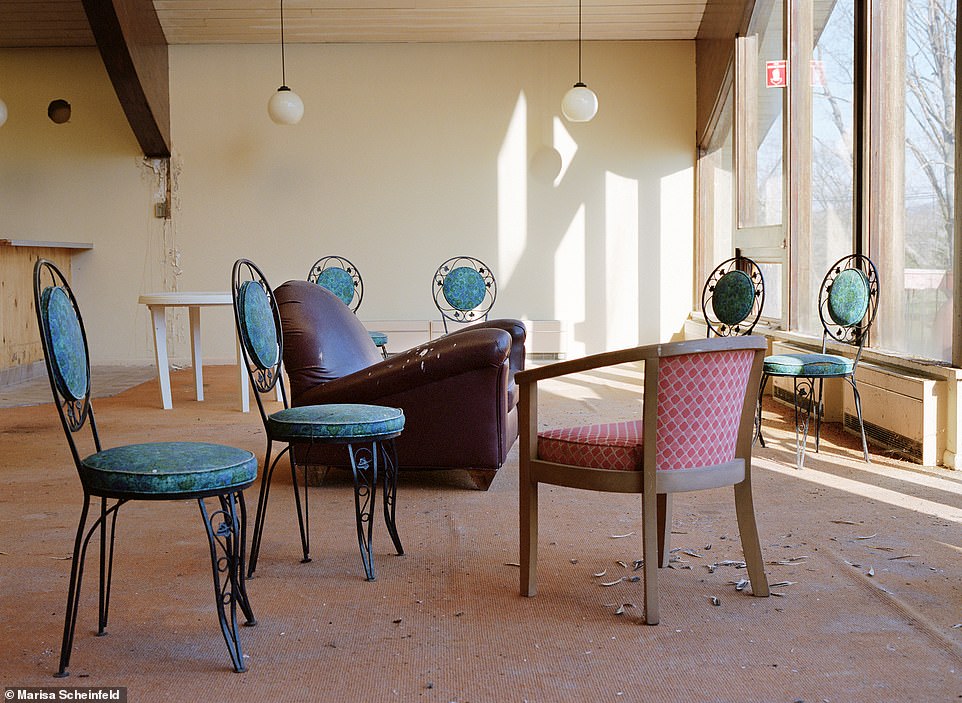 Comparing herself to archaeologist, she said although she’s interested in sharing the history of Jewish Americans, she likes that her photography isn’t intrusive.

Schienfeld’s role is simply to keep the stories of the place – where Mel Brooks, Joan Rivers, Billy Crystal, and Rodney Dangerfield are known to have performed – very much alive.

She added: ‘I feel like an archaeologist, looking at these off-the-beaten-track places — but I am not interested in tampering with the surface or constructing the scenes.’ 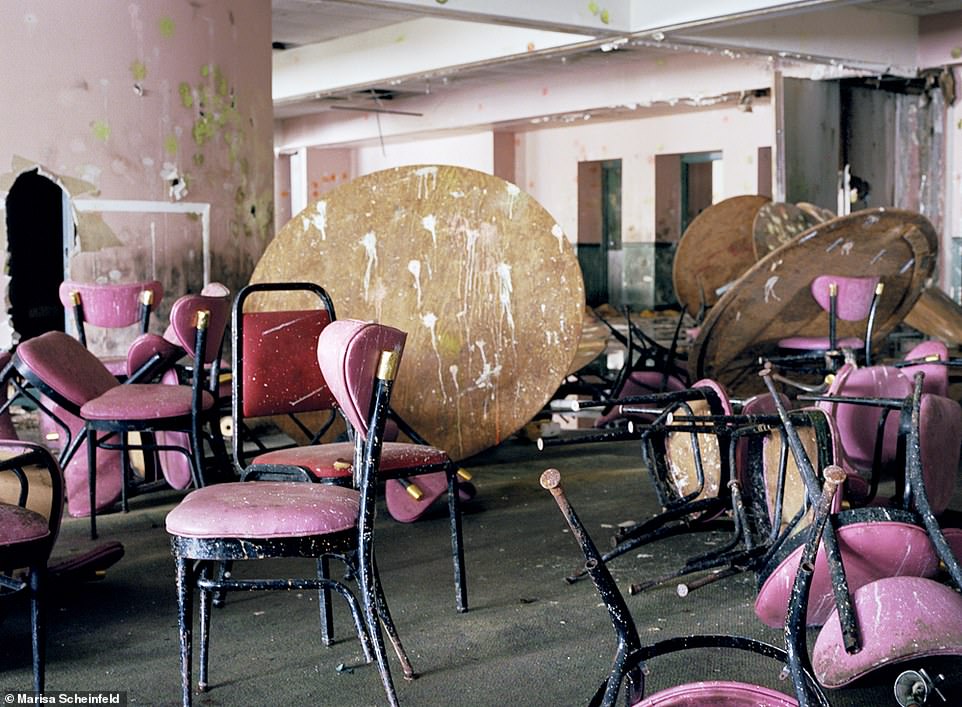 Dining room at Pines Hotel, South Fallsburg, New York still had its furniture when Scheinfeld visited for her project