Meet the mountain tribe who smoke their ancestors daily to preserve their mummified bodies and force women to chop off their fingers after they have lost a loved one.

The indigenous Dani tribe live in the isolated Baliem Valley in West Papua, Indonesia, and include customs such as amputating the fingers of women who have lost a loved one with huntsman wearing an unusual piece of underwear – the Koteka – which is commonly referred to as a penis sheath.

And the Dani people who were only discovered by Western scientists 80 years ago – have a range of bizarre and macabre traditions passed down through generations of tribal forebears.

A Dani tribesman wears wild boar tusks as rings through the nose with feathers adorning his head n the isolated Baliem Valley in West Papua, Indonesia 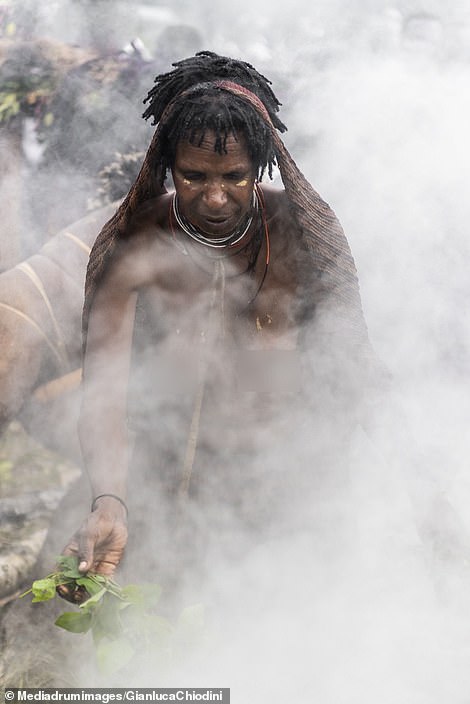 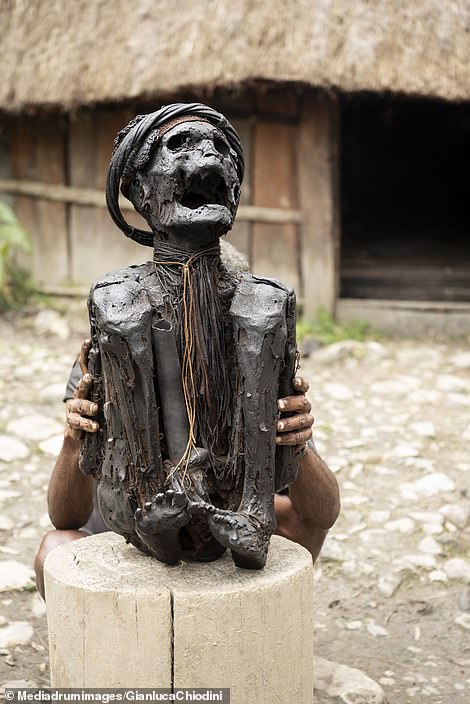 A tribeswoman cooks the hunted pig using an open air ‘steam oven’ using leaves (left). Wimontok Mabel was a warrior chief who lived 250 years ago and is preserved by a strict daily process (right) 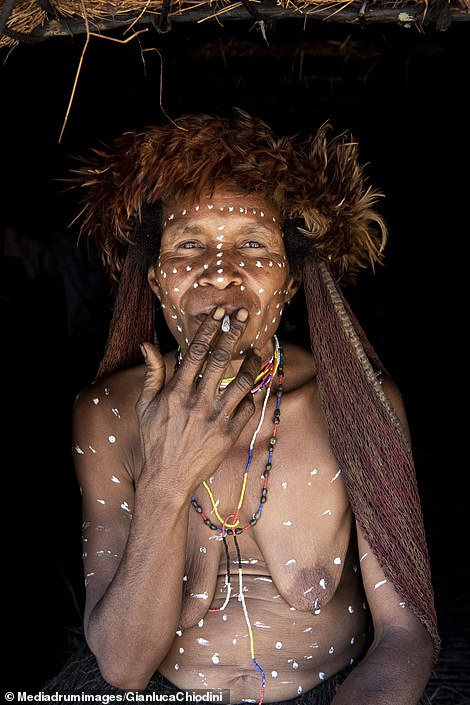 One ritual includes using a stone axe to remove the fingertips of tribeswomen every time she loses a close relative to emphasise the pain of her loss and to appease the dead relative.

Similarly grotesquely, the tribe has been heavily linked with cannibalism in the past, although neither gruesome tradition has taken place in the tribe since the 1990s.

After using various means of transport to reach the secluded Dani people, Mr Chiodini was greeted with ‘kindness’ and was stunned when he saw the mummified remains of a 250-year-old chief.

‘The Dani are the most beautiful tribe in the region by far – the men have penis sheaths (Koteka) and wild boar tusks as rings through the nose and colourful face paints – you’re left in no doubt you’re looking at warriors,’ explained Mr Chiodini.

‘I studied mummification before I arrived but knew it would only be luck that allowed me to actually see one of the preserved corpses.

‘The Dani are said to keep seven mummies in total but only two can be seen by foreigners.’ 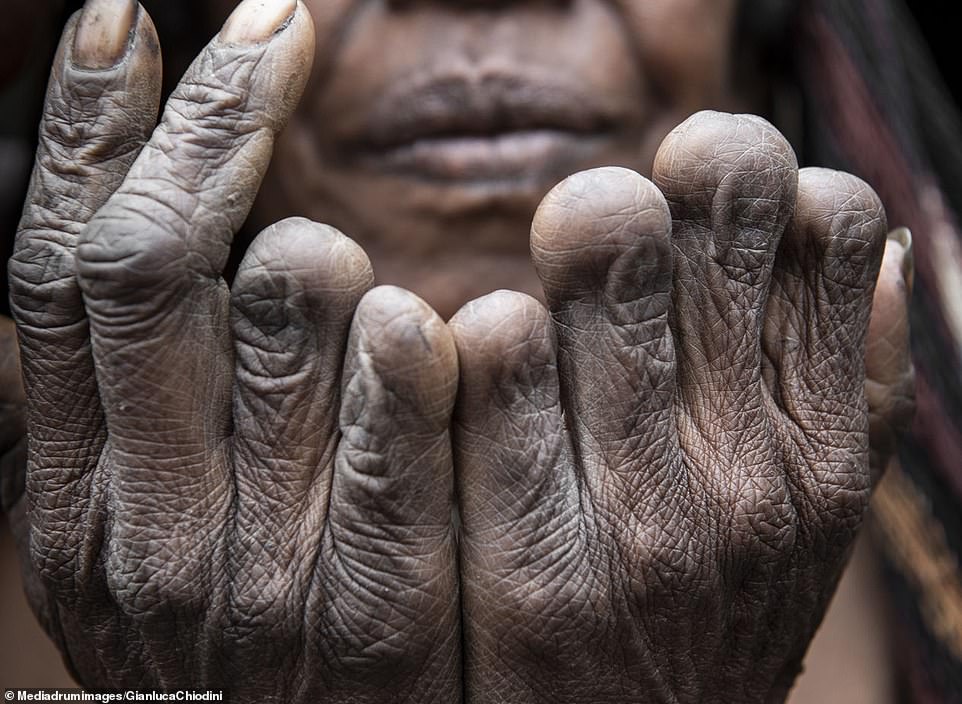 An older woman shows six fingers amputated to represent the loss of six loved ones. The tradition has not taken place since the 1990s 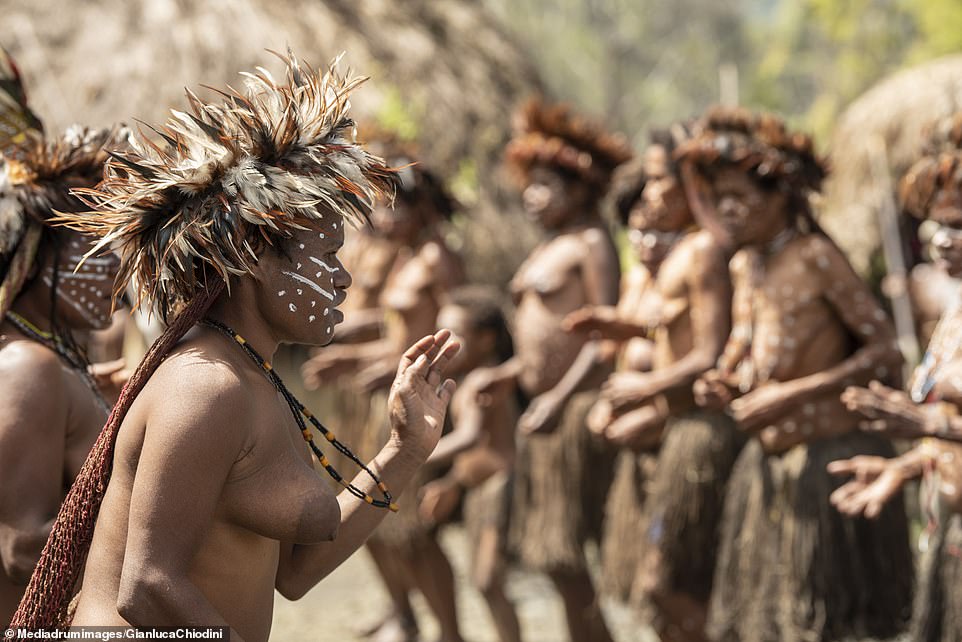 Women line up to do a tribal song and dance wearing face paint and feathers. Photographer, Gianluca Chiodini, described them as ‘the most beautiful tribe in the region by far’ 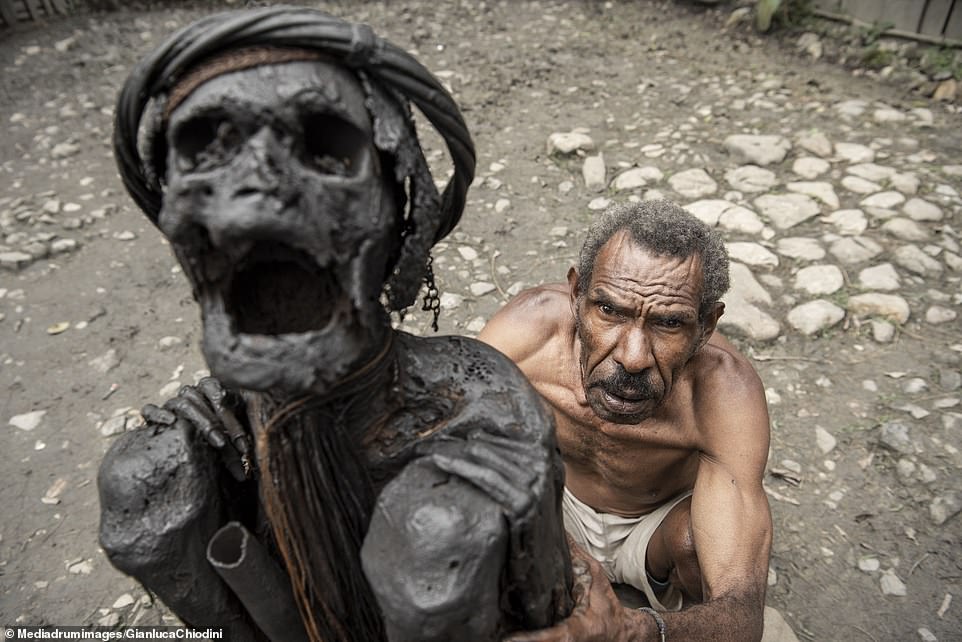 The mummified carcass of Wimontok Mabel, a Dani chief who lived 250 years ago and had 25 wives. The mummy is greased every day with a balm made with pork fat and a fire is lit that burns for up to six hours 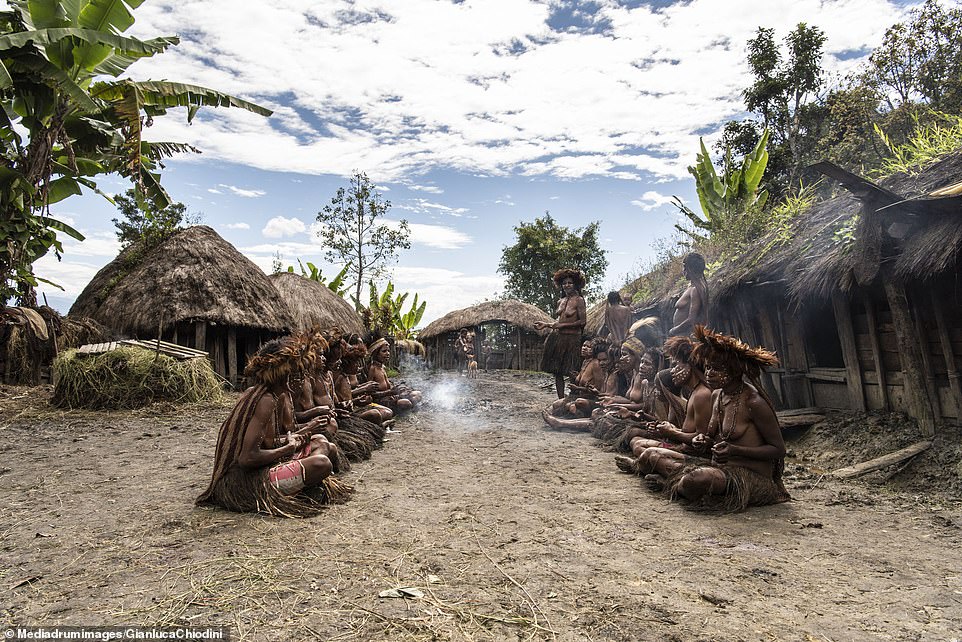 A cultural meeting takes place between the women and children of the tribe as a fire smokes around them. During the feasts women are made to wait their turn

‘To preserve the body, it is greased every day with a balm made with pork fat and a fire is lit that burns for up to six hours. All this has been happening daily for 250 years.’

He continued: ‘The mummy is kept protected in a hut where access is strictly forbidden and only a select few are allowed to touch the dead.

‘The mummy I saw was a village chief, his name was Wimontok Mabel and he was a glorious warrior. He lived more than 250 years ago and had 25 wives. Peace to his soul.’ 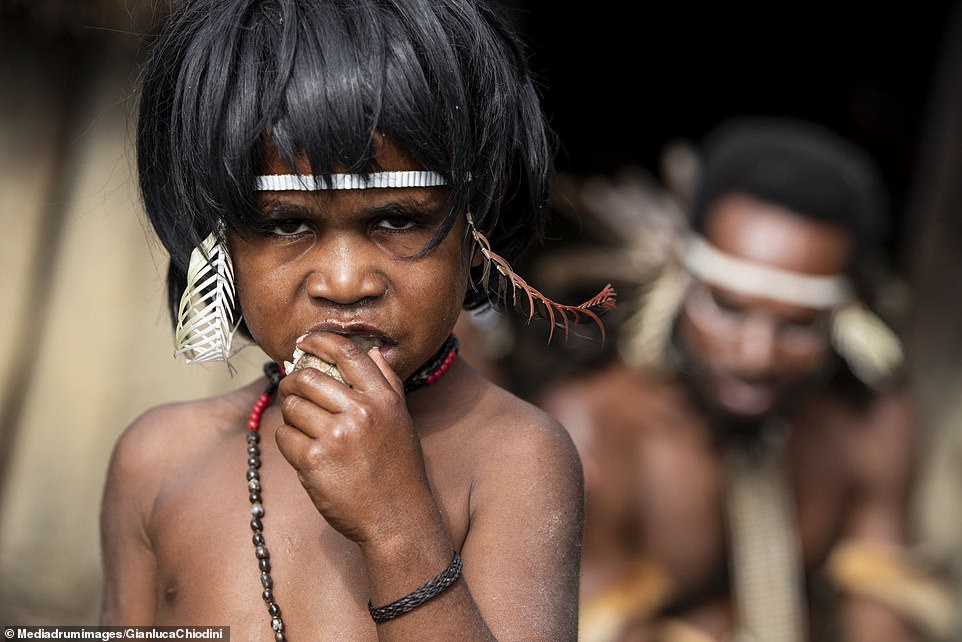 A young Dani member with beads, feathers and a leather bracelet eats while staring down the lens of the camera distrustfully 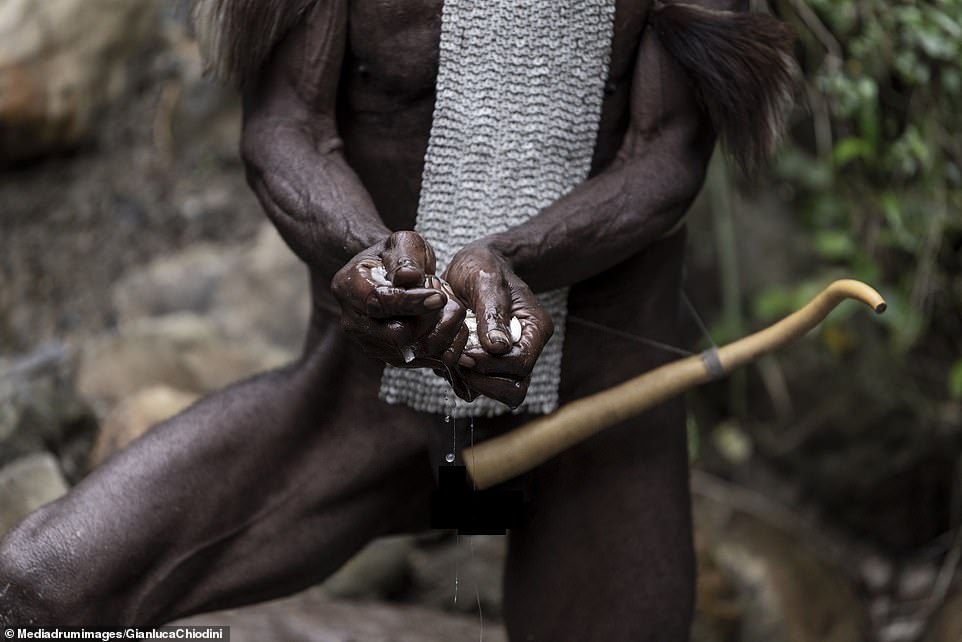 The Dani people were discovered by an American zoologist in 1938, the first time their existence was recorded by an outsider.

Richard Archbold was on an expedition to New Guinea when he spotted the Dani people from a plane.

According to Chiodini, there have been some major changes in the 80 years but some key traditions are still upheld.

‘The first contact by a Westerner was less than one century ago and the Dani were found living in Stone Age conditions, even practicing cannibalism according to some sources,’ Gianluca said. 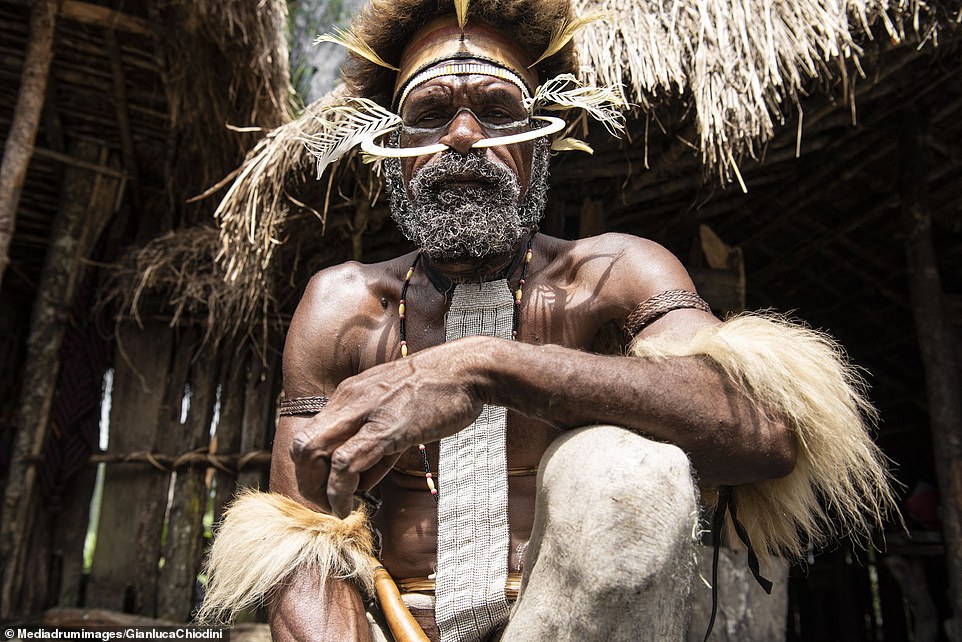 A Dani tribesman wears an impressive array of feathers, fur and beads. He also has wild boar tusks linked through his nose 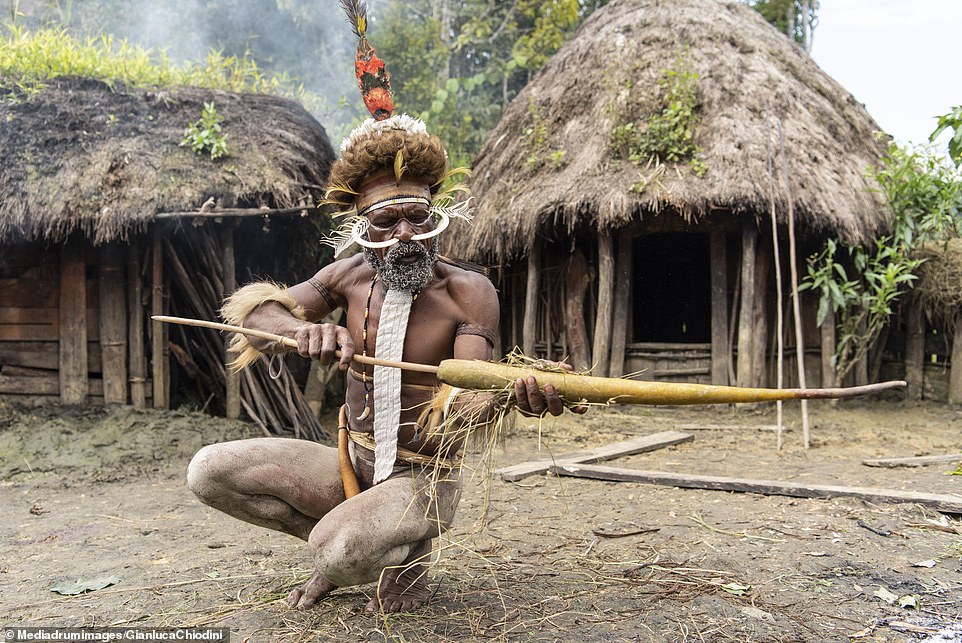 The tribesman creates a penis sheath from an elongated pumpkin. Over the past decades, Indonesian authorities have enforced laws causing the Dani to abandon their traditions and culture but even today some still wear Koteka 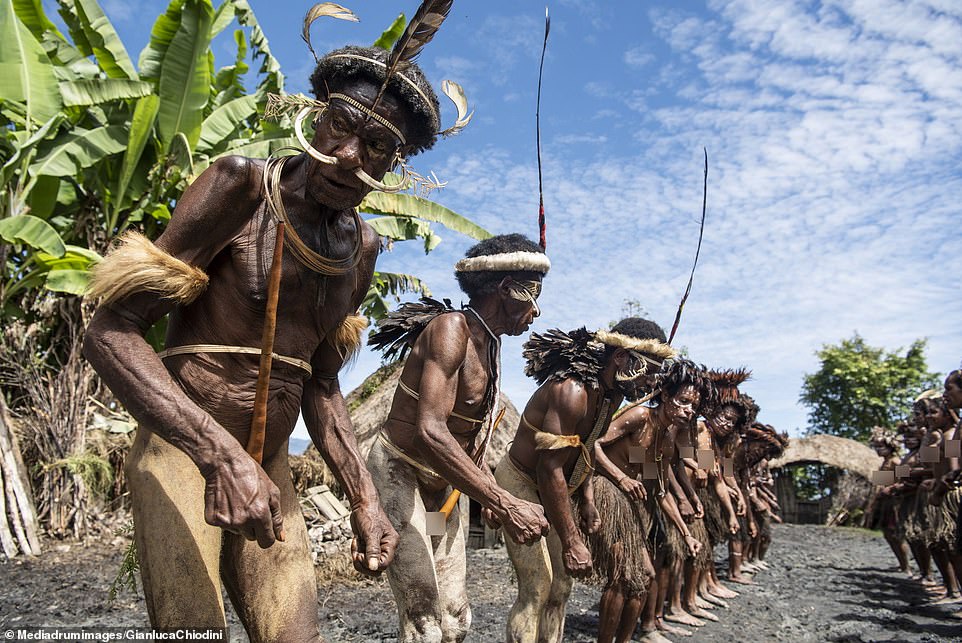 Dani tribe lines up face to face and are seen wearing wild boar tusks. The Dani people were discovered by an American zoologist in 1938, the first time their existence was recorded by an outsider

‘Over the past decades, Indonesian authorities have enforced laws causing the Dani to abandon their traditions and culture but even today some still wear ‘Koteka’. The village chief even explained me how to build a Koteka for me with an elongated pumpkin.

‘Cannibalism has been left in the past though and now they prefer to have pig festivals. Men kill a pig with bow and arrow while women prepare a rudimental open air ‘steam oven’ using leaves and in the end everyone eats the pig.

He described how during the feast the women are made to wait their turn.

Mr Chiodini said: ‘I saw a woman with a strange hand and I couldn’t quite make out what was wrong. 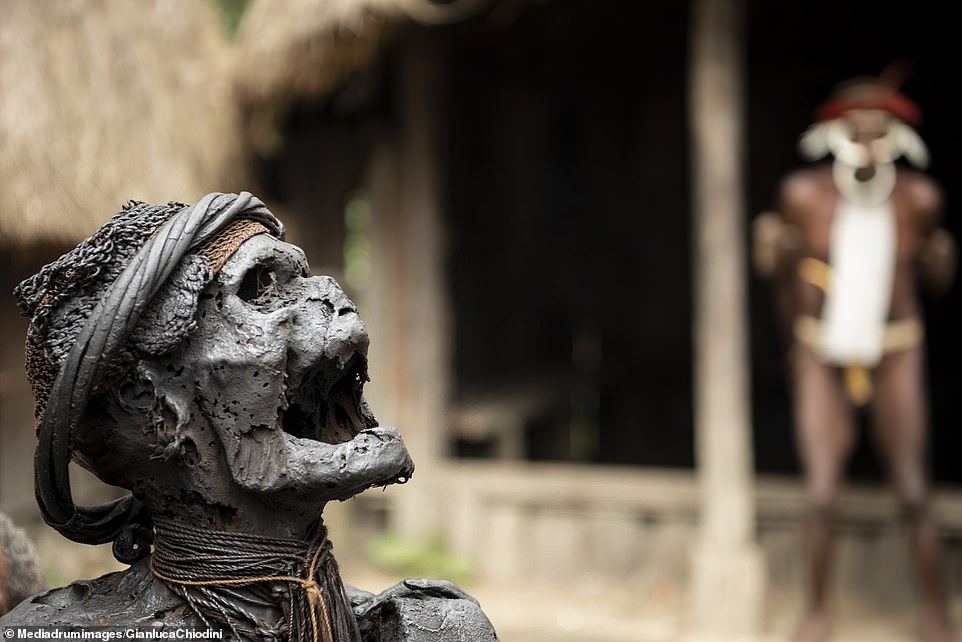 The 250-year-old chief is greased with a balm made from pork fat daily and a fire is like for up to six hours to preserve it. These rituals have happened daily for 250 years

‘As I got closer I realised that several fingers were missing. They told me that tradition of the Dani states that when a close relative dies, the woman is made to have her fingers chopped with a stone axe to emphasise the pain of loss and to appease the dead’s spirit.

‘Today it is forbidden but you can still see the amputated hands of the older women.’

Mr Chiodini said he was pleased to capture the beauty of the Dani people and preserve the traditions in his work.

He added: ‘Despite their aggressive look and the isolation they live in, they are friendly. It can take a little while for them to trust outsiders which is why I decided to take some time and spend some days with them.

‘Slow photography’ is always a winning strategy and hopefully people can see that there is beauty everywhere.’ 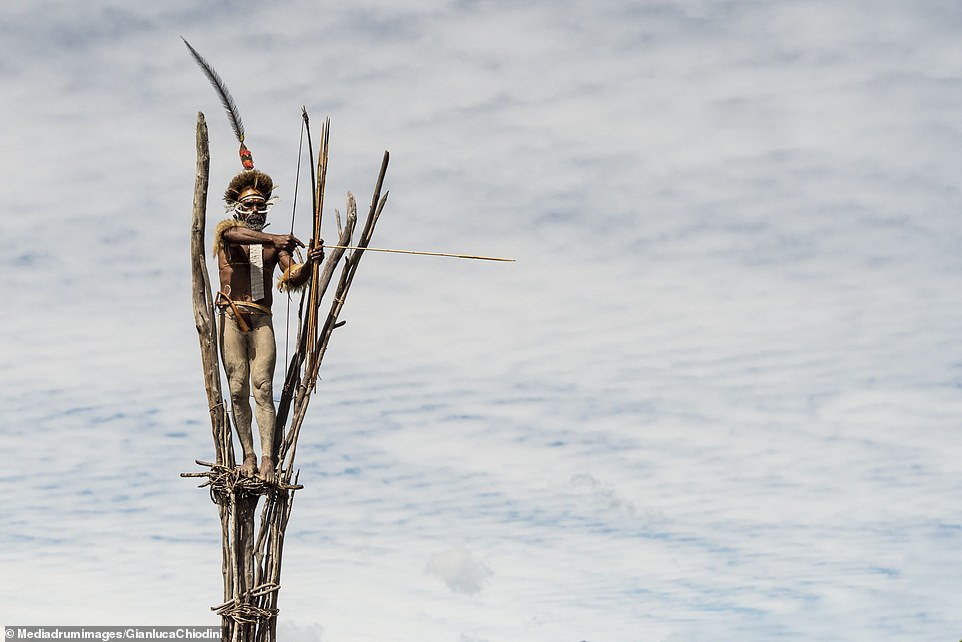 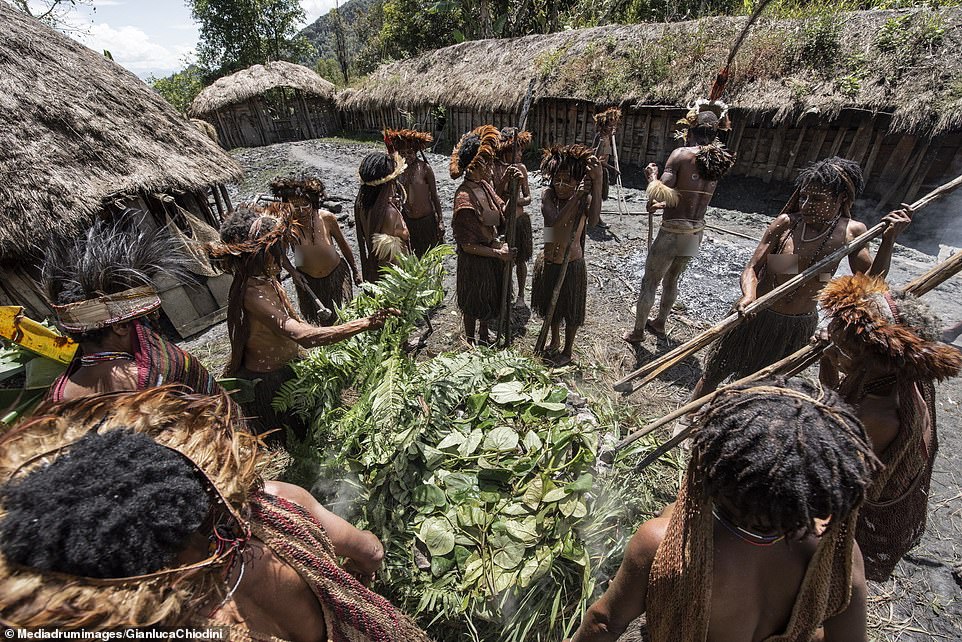