Nick Cave is well known as a musician, composer and even a screenwriter.

But his wife of 23 years, Susie Cave (née Bick), has quietly become a powerhouse in the world of fashion design, creating the label The Vampire’s Wife beloved by celebrities –  with one frock Vogue dubbed ‘the dress of the decade’.

The couple have settled into a Gothic lifestyle on the south coast of England, with their lives chronicled by Susie on her popular Instagram account.

Take a look inside the strange Gothic lives of ‘Prince of Darkness’: Nick Cave and his fashion designer wife Susie Bick have settled into a Gothic lifestyle on the south coast of England, with their lives chronicled by Susie on her popular Instagram account

Another picture shows the normally black-clad couple dressed in pastels and posing in front of a pair of painted pink flamingo sculptures on a mantel.

Meanwhile, the headquarters of Bick’s fashion label resides in an abandoned Victorian Sunday school in Lewes which dates back to 1860. 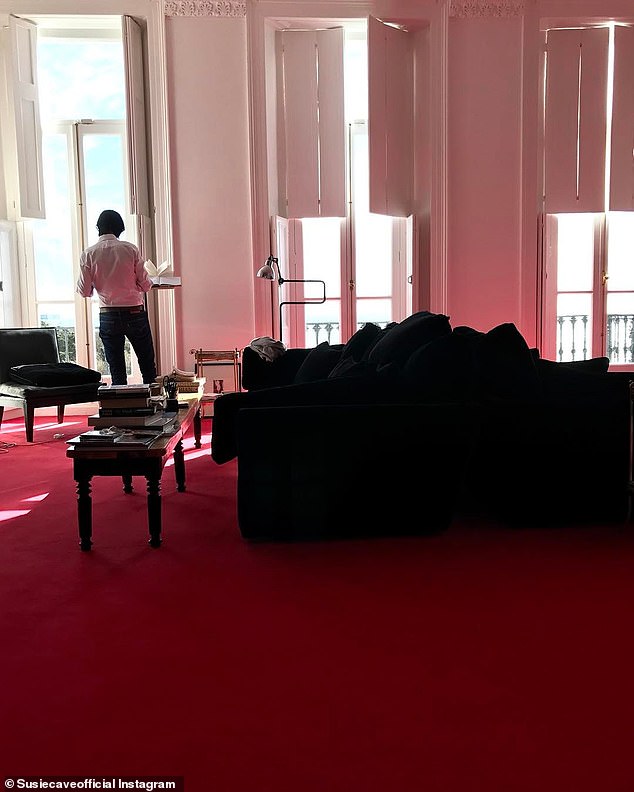 Home: Nick, 64, and Susie, 55, live with their son Earl, 21, in a whimsical home in Brighton, located 75 kilometres south of London. Pictured: Cave at work in the family home)

The name of the label is taken from one of Nick’s abandoned novels and has become a cult favourite amongst celebrities.

The Vampire’s Wife set up in 2014 in a small atelier in Brighton, with clothes manufactured in Poland.

They’ve also been worn by royals, with Kate Middleton and Princess Beatrice both wearing her garments at Prince Harry and Meghan Markle’s 2018 wedding.

As her husband’s career flourished, Susie found herself being invited to A-list parties — ‘I started designing clothes for myself because I couldn’t find anything I wanted to wear.’ 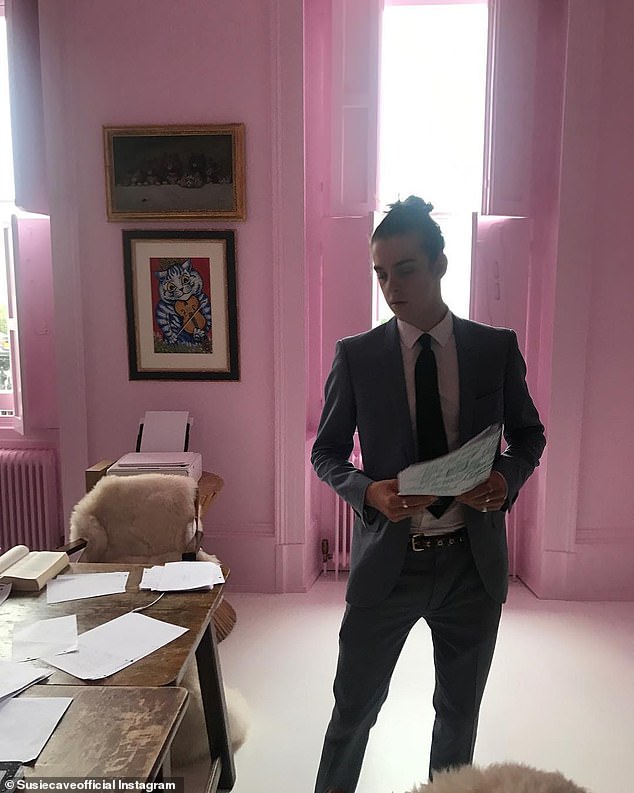 Offspring: The couple’s son, Earl, is seen here in the home which boasts bubblegum pink walls in certain rooms 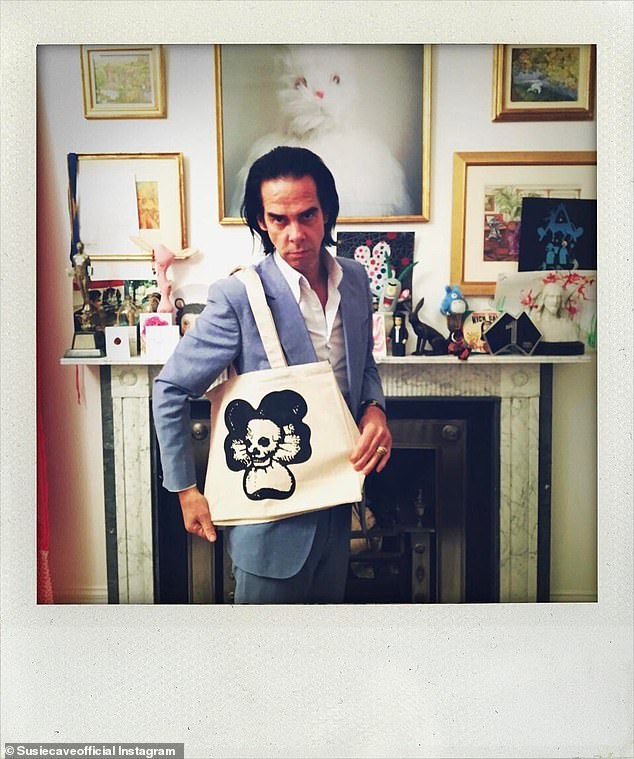 But the couple’s glamorous life together has over the years been clouded by tragedy.

First, their son Arthur tragically passed away at age 15, after falling 60ft to his death from a cliff in Ovingdean, near Brighton, in July 2015.

The teenager, described by his family as a ‘beautiful, happy, loving boy’, had been taking the hallucinogenic drug LSD, an inquest later heard. 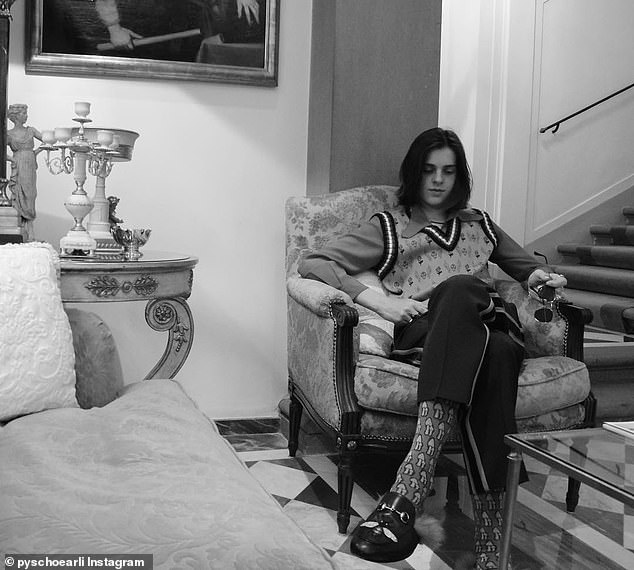 Four sons: In addition to Earl (pictured), Cave has another son, Luke, 30, from his first marriage to Brazilian journalist Viviane Carneiro

While Susie’s label itself is the epitome of whimsical fashion, Susie knows sadly little of the ‘lightness’ her clothes represent.

‘I struggle with certain things that have happened in my life and sometimes can be in quite a dark place,’ she said in 2018.

‘I get lost when I’m designing. Time just flies by. It’s actually an absolute gift, because the worst thing happened to me. I channel any positive energy I can into creating clothes.’ 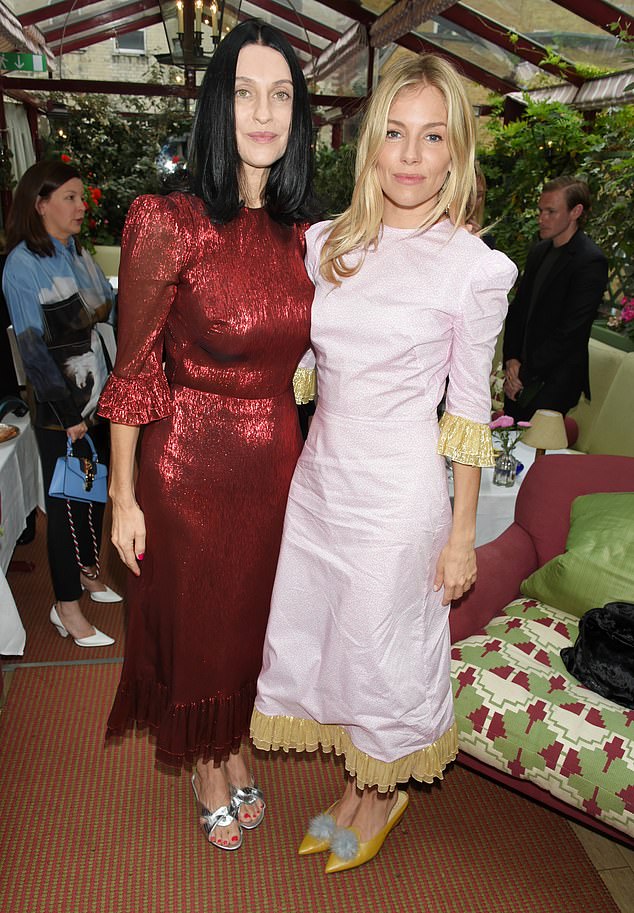 Fashion star: The name of Bick’s label is taken from one of Nick’s abandoned novels and has become a cult favourite amongst celebrities. She is pictured here with Sienna Miller

Unable to work, leave the house or face seeing anyone, Susie retreated. Photographs from Arthur’s inquest show her hiding her face behind a curtain of raven-black hair, shoulders shuddering as she clung to Nick for support.

And then, three months later, came a phone call. ‘I got a call from Daisy Lowe — the model daughter of Pearl Lowe and a family friend — saying she needed a dress for an awards ceremony and would I make one for her?

‘So I dragged myself into the office to find the red fabric. And she wore it. And I saw it photographed. That was kind of a breakthrough. From then on I went to work every day. 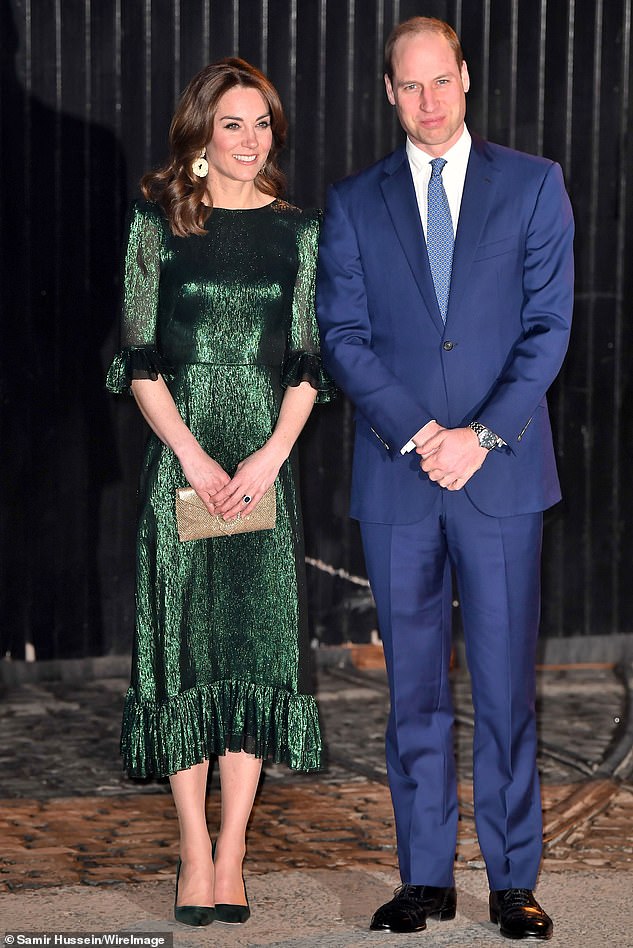 Susie’s label is a favourite of Kate Middleton. The Duchess wowed in the glittering green gown as she joined Prince William for an evening reception at the Guinness Storehouse in Dublin in 2020 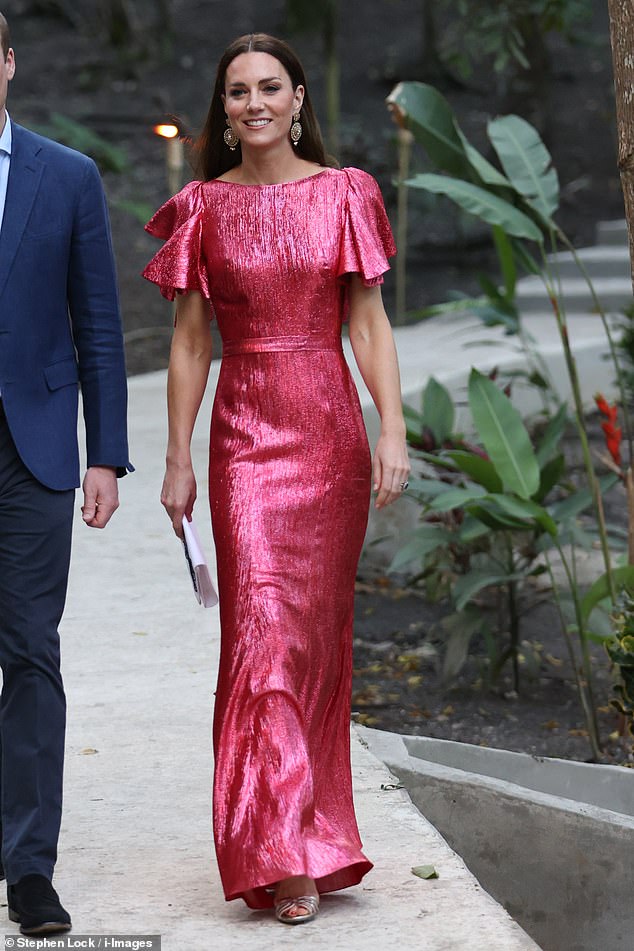 Kate, 40, dressed in a floor-length £2,500 pink gown by the British designer for an evening reception in celebration of Her Majesty The Queen’s Platinum Jubilee during their Royal Tour of the Caribbean in March this year

‘Having something to do which was physically demanding enabled me temporarily not to think of anything else,’ she said.

‘When Arthur died, I didn’t think I could carry on. When you lose a child, nothing will take away the pain, not ever. But I did realise if I could focus on something outside of what had happened, that if I could separate myself somehow from it all, even for a few seconds, and start creating things in those moments of escapism, then that might be an important thing.’

The couple have been hit by more tragedy this month. Earlier this month Nick’s eldest son, Jethro Lazenby, died at age 30.

‘With much sadness, I can confirm that my son, Jethro, has passed away,’ Nick said in a statement. ‘We would be grateful for family privacy at this time.’ 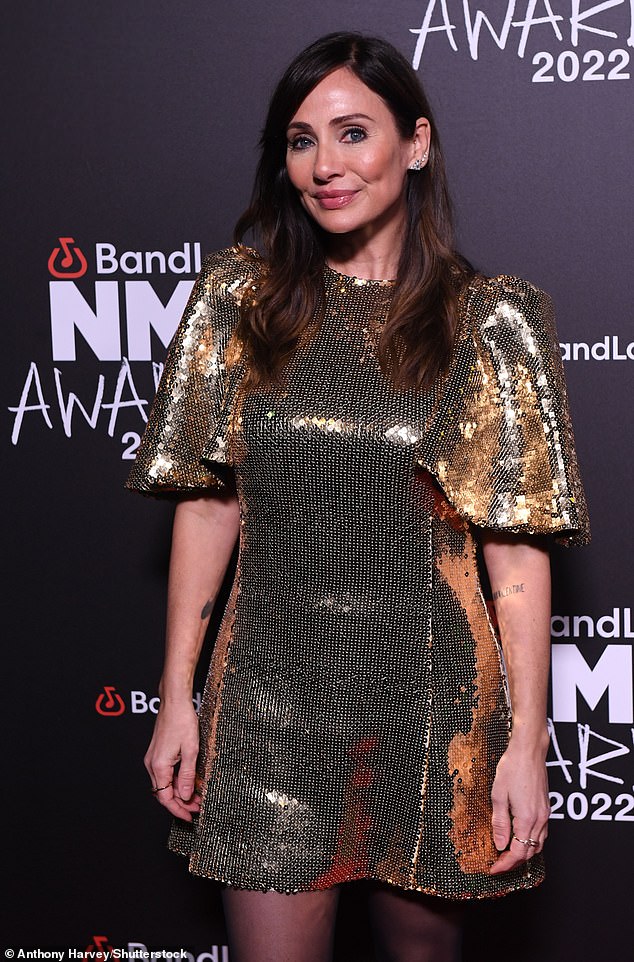 Stunning: Aussie actress and singer Natalie Imbruglia is seen wearing a mini dress by The Vampire’s wife at the NME Awards in London this year 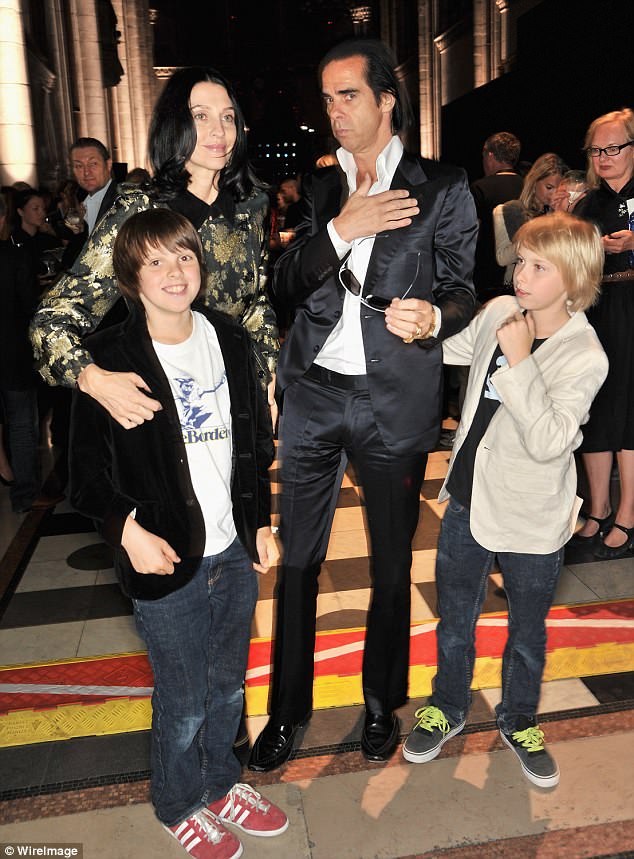 Nick and Susie son Arthur (right) tragically passed away at age 15, after falling 60ft to his death from a cliff in Ovingdean, near Brighton, in July 2015. He is pictured here with his twin Earl

Jethro was born to his Melbourne-based model mother Beau Lazenby in 1991, just 10 days before Nick’s second son Luke was born.

The musician and his firstborn had a ‘strained’ relationship and only met when Jethro was seven or eight years old.

In the wake of Arthur’s death, Nick and Susie relocated from Brighton to Los Angeles before returning to England.

Last year, the rocker was asked on fan Q&A site Red Hand Files why he had decided to move away from Brighton. 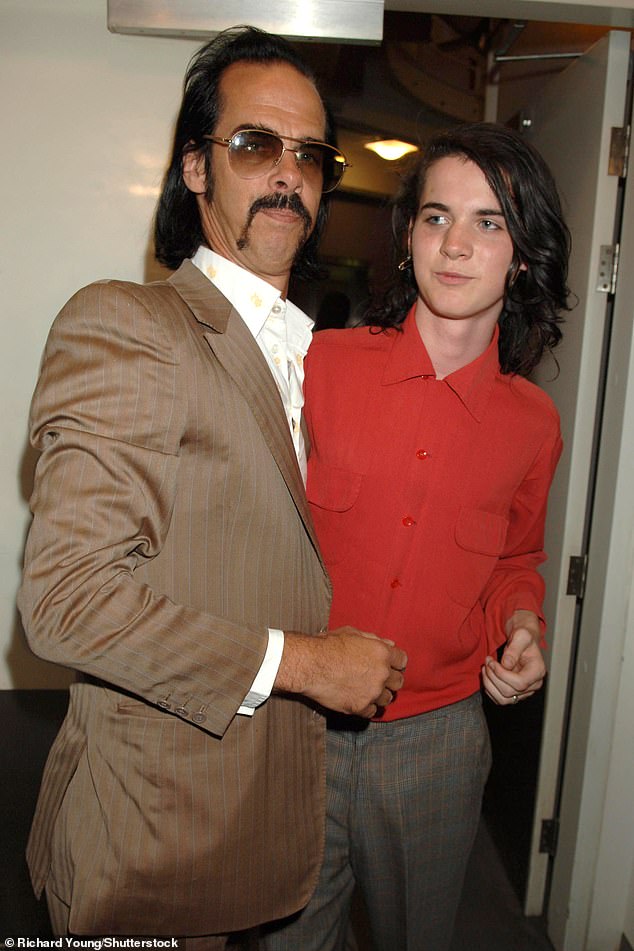 The couple have been hit by more tragedy this month. Earlier this month Nick’s eldest son, Jethro Lazenby (pictured here), died at age 30

In response, the star spoke of his Bad Seeds track Heart That Kills You, which he said was ‘clearly written’ while he was grieving for Arthur.

‘The words of the song go someway toward articulating why Susie [his wife] and I moved from Brighton to L.A.,’ he explained. ‘Brighton had just become too sad.

‘We did, however, return once we realised that, regardless of where we lived, we just took our sadness with us.

‘These days, though, we spend much of our time in London, in a tiny, secret, pink house, where we are mostly happy.’

In addition to Earl, Nick has another son, Luke, 30, from his first marriage to Brazilian journalist Viviane Carneiro.

His son Earl, Arthur’s twin, is an actor and has starred in The End of the F***ing World, television series Alex Rider and The School for Good and Evil. 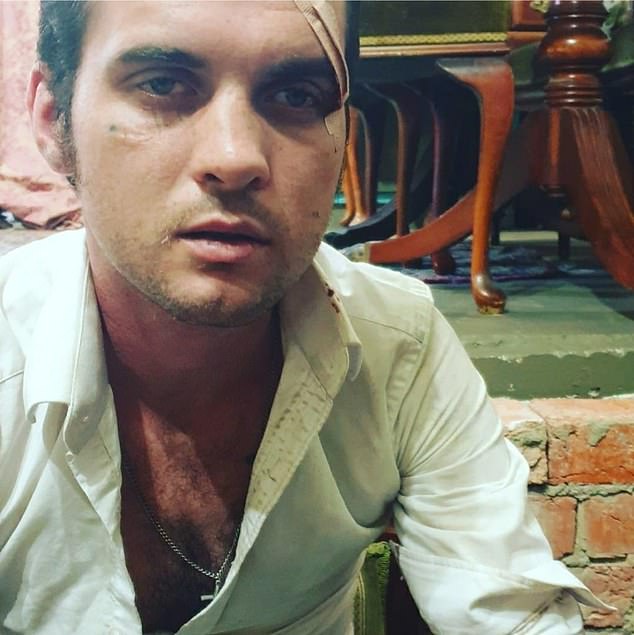 Susie was introduced to Nick by Bella Freud, a mutual friend, who ensured their paths crossed at a party at the Natural History Museum, in London.

‘He found me under the T-Rex,’ Susie recalled.

They married in a register office in Richmond, South-West London, followed by a blessing at a chapel in Surrey, in 1999.