He is the most notorious prisoner in Britain and has spent most of his life behind bars.

Charles Salvador, the artist formerly known as Charles Bronson, is 65 but has been locked up for 41 years, 37 of those in solitary confinement for a range of offences including attacking guards and taking hostages.

Once an armed robber, he is now a painter and one month after marrying his soap star wife Paula Williamson behind the bars of Wakefield Prison he has released a collection of his pieces.

This exclusive look at his new book, Art Attack, reveals a wide variety of weird and wonderful pictures, including a tribute to the Kray twins, Great Train Robber Ronnie Biggs and even the Manchester Arena bomb victims.

‘Do they want more? Is my art worthy of my freedom and will the art world accept me?

‘Love me or hate me I need to know all this. Am I wasting my time? Am I kidding myself? Can I ever be accepted by the outside world? Am I worthy of the title “Artist”?

‘I hope this book you have in your hands can at least show I am trying to express who and what I am.’

To buy the book, visit: www.mojorisinpublishing.com 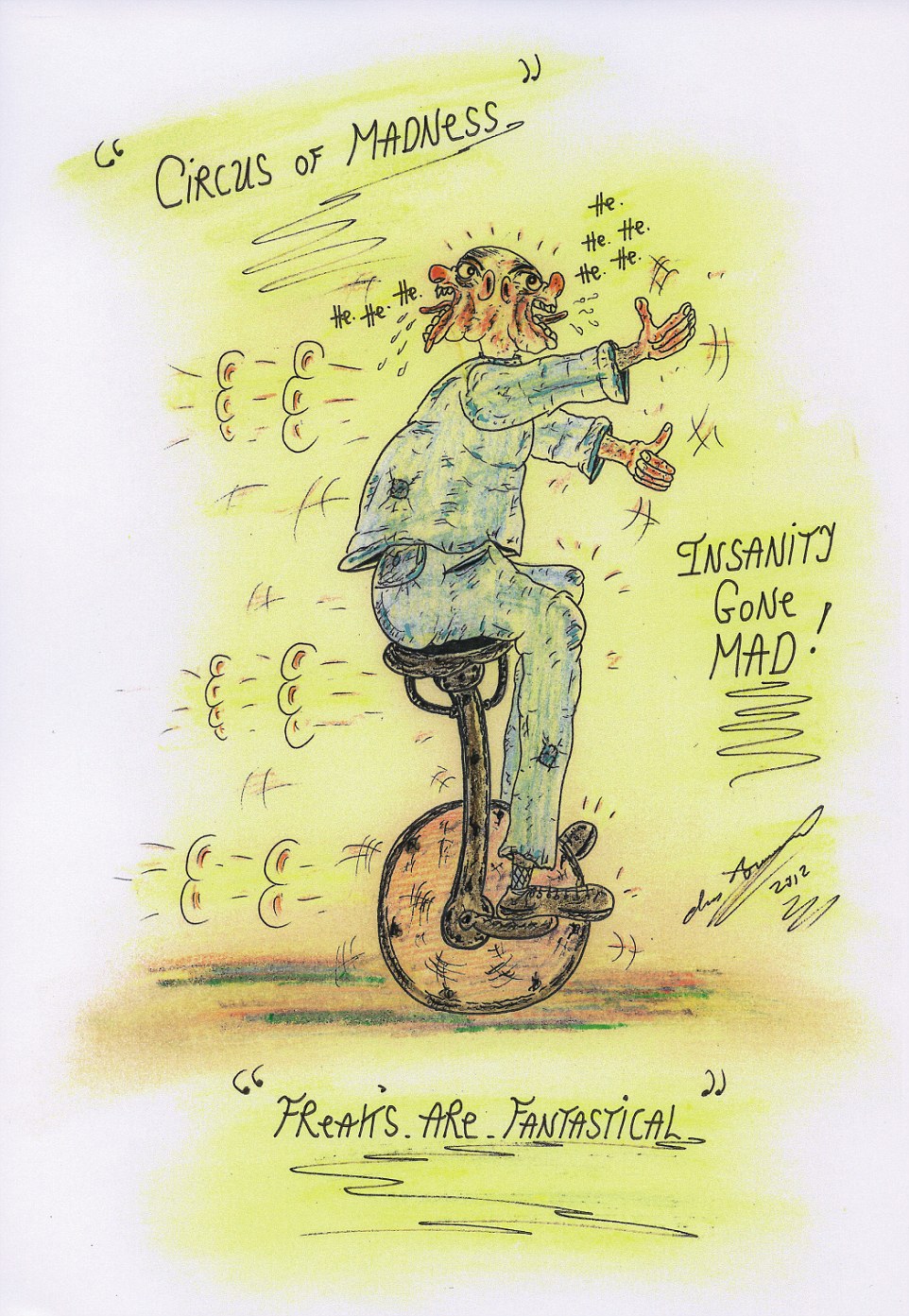 This bizarre illustration shows a man with two faces balancing on a unicycle. His mouths are open and the tongues seem to be spraying saliva everywhere. Around the man on the unicycle, several statements are written. One says, ‘Freaks. Are. Fantastical’ while another says, ‘Insanity gone mad’. The final one reads: ‘Circus of Madness’ 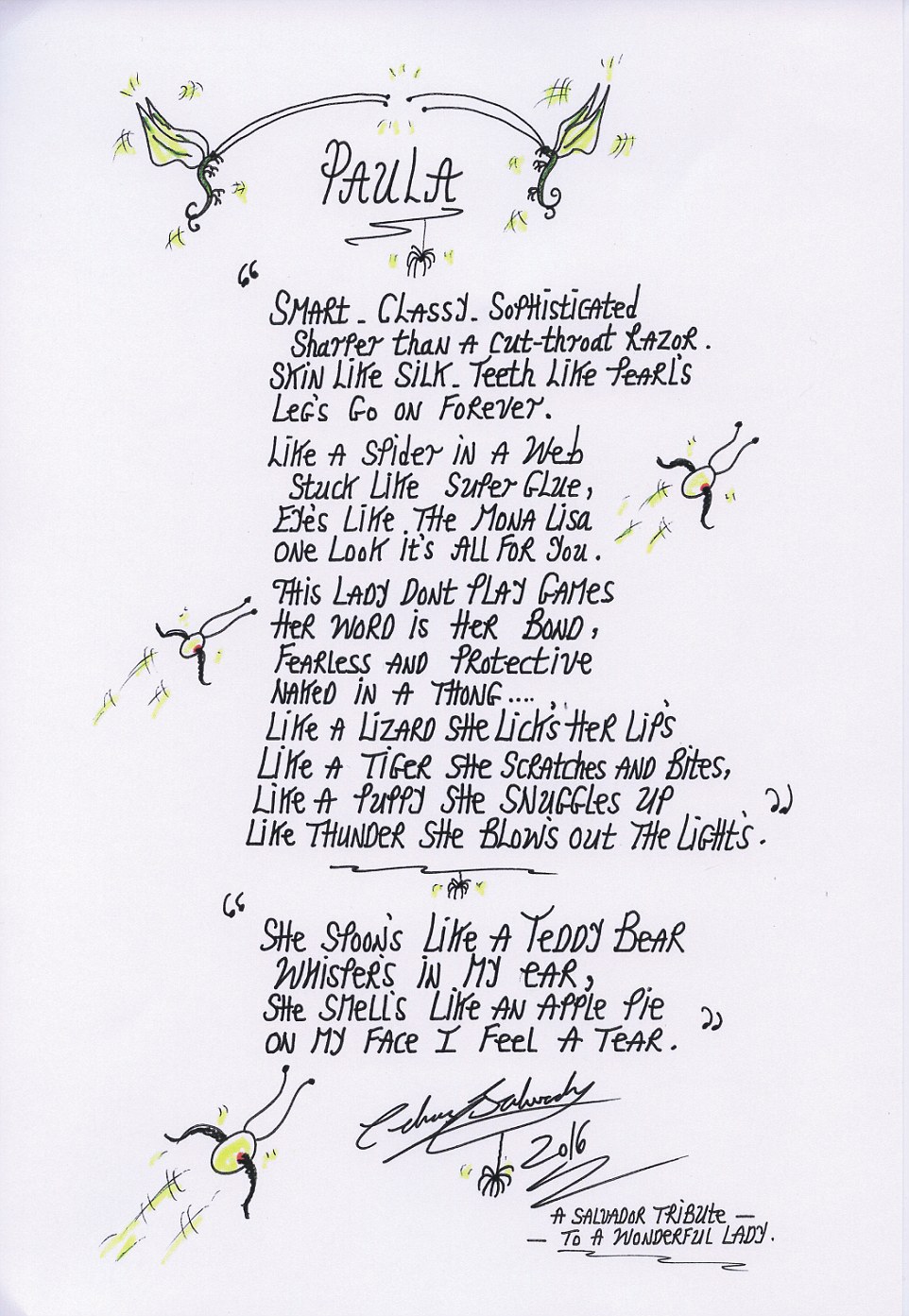 Bronson married soap actress Paula Williamson in November. The ceremony was held at HMP Wakefield where Bronson is currently serving time. He was not allowed to the wedding reception afterwards and his bride flew off on her honeymoon without him. In this poem, Bronson describes her as, ‘smart, Classy, sophisticated’ 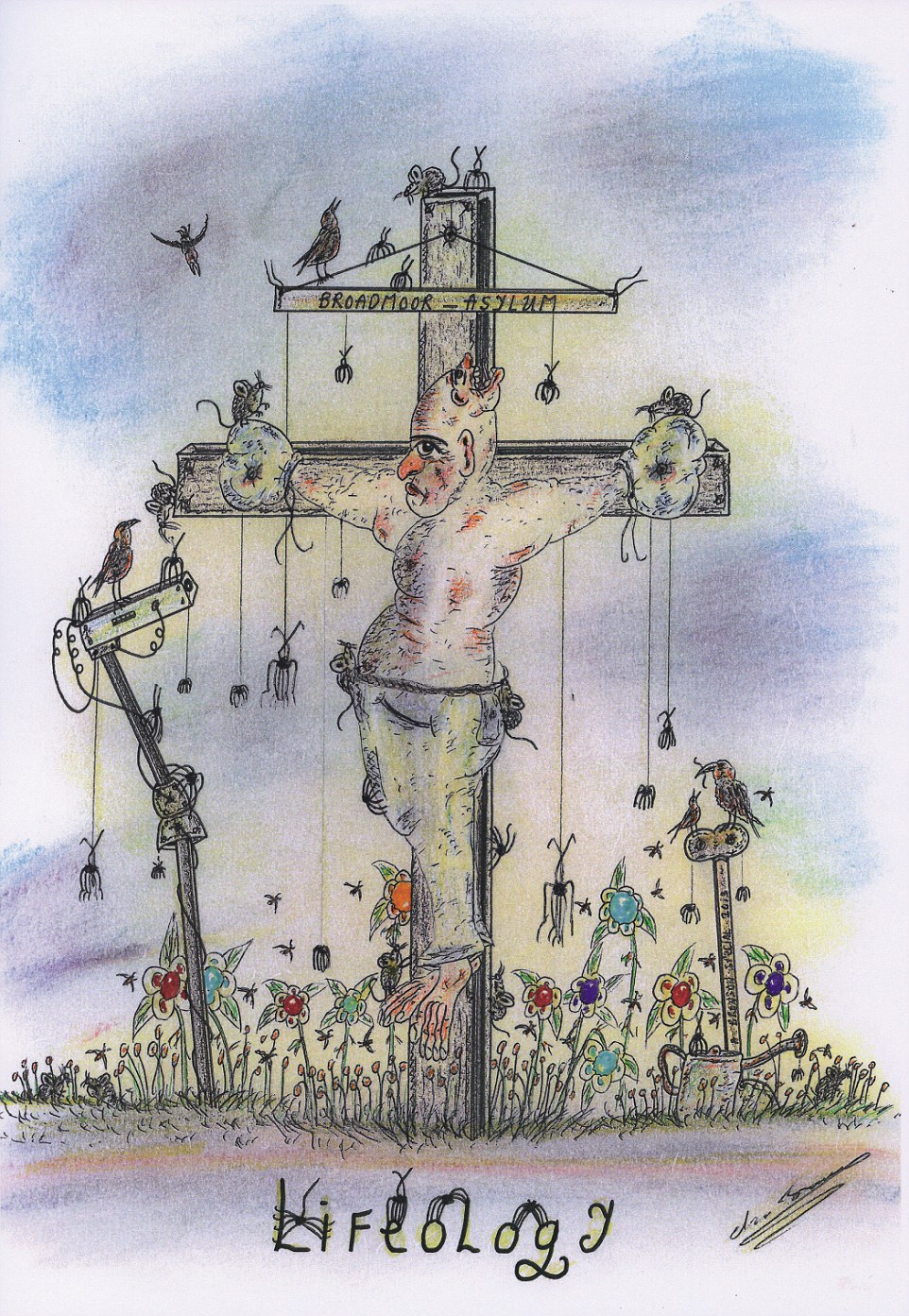 In another strange piece, Bronson drew a topless man on a crucifix being watched by a CCTV camera. In the background, two birds sit on what appears to be a giant key and spiders dangle from string of web off the cross. The man has a face coming out the top of his head and writing on the cross says, ‘Broadmoor Asylum’. Bronson has spent time in Broadmoor Hospital 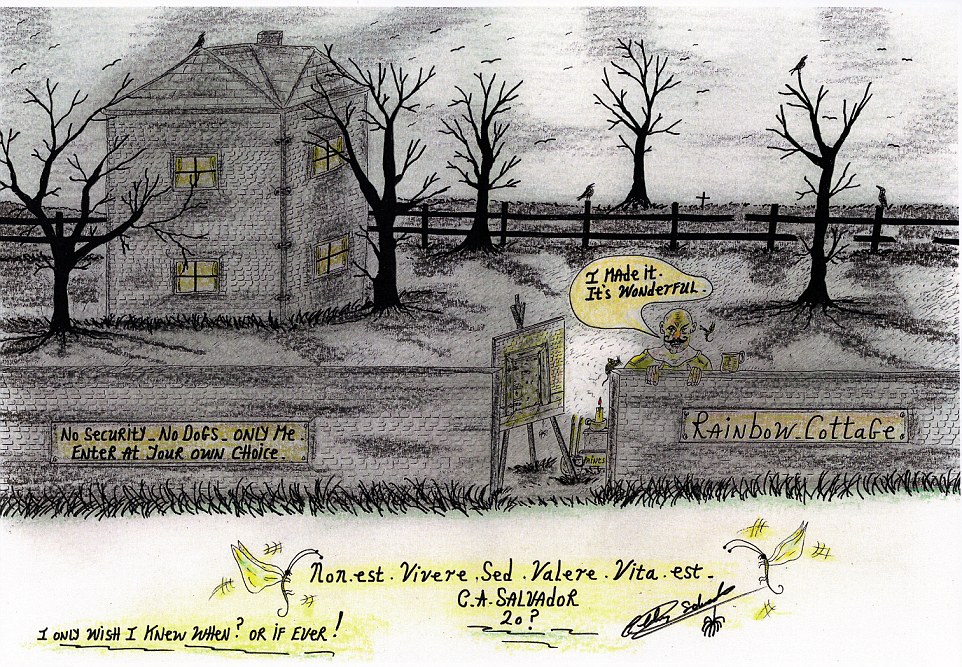 This picture, mainly in black and white, shows a house set behind a wall and surrounded by treeless leaves. A figure resembling Bronson leans over the wall in front of a painting and in a speech bubble is written: ‘I made it. It’s wonderful’. A sign on the wall reads ‘Rainbow Cottage’ and another says ‘No security. No dogs. Only me. Enter at your own choice’ 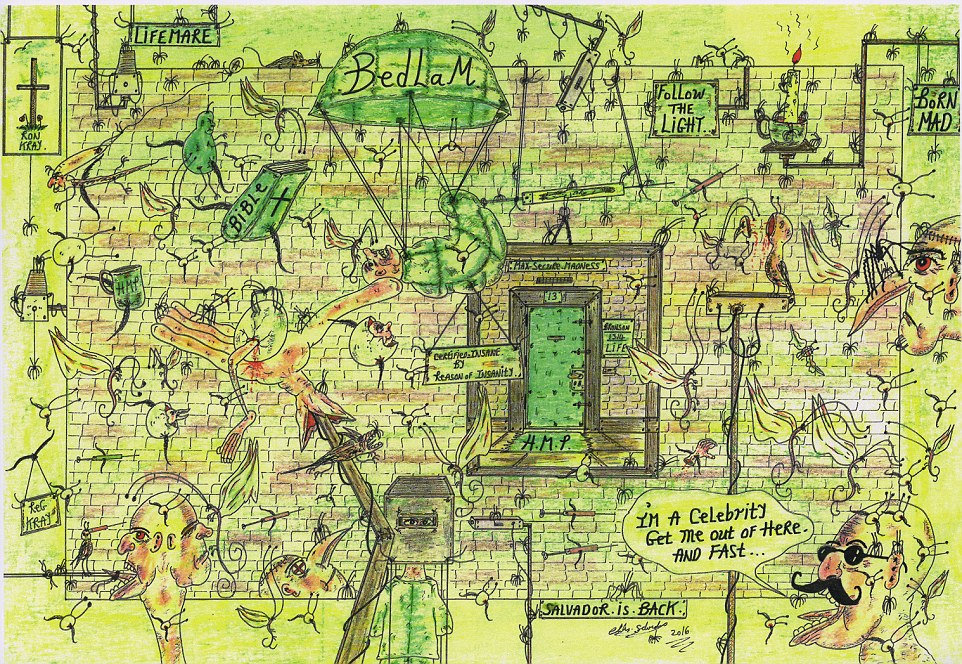 In another bizarre sketch Bronson makes a reference to Bedlam, the notorious mental hospital in London. A copy of the bible is seen  flying through the air and there are strange images scattered throughout the picture. In the bottom corner there is a picture of what appears to be Bronson himself, along with the words, ‘I’m a celebrity, get me out of here – and fast’ 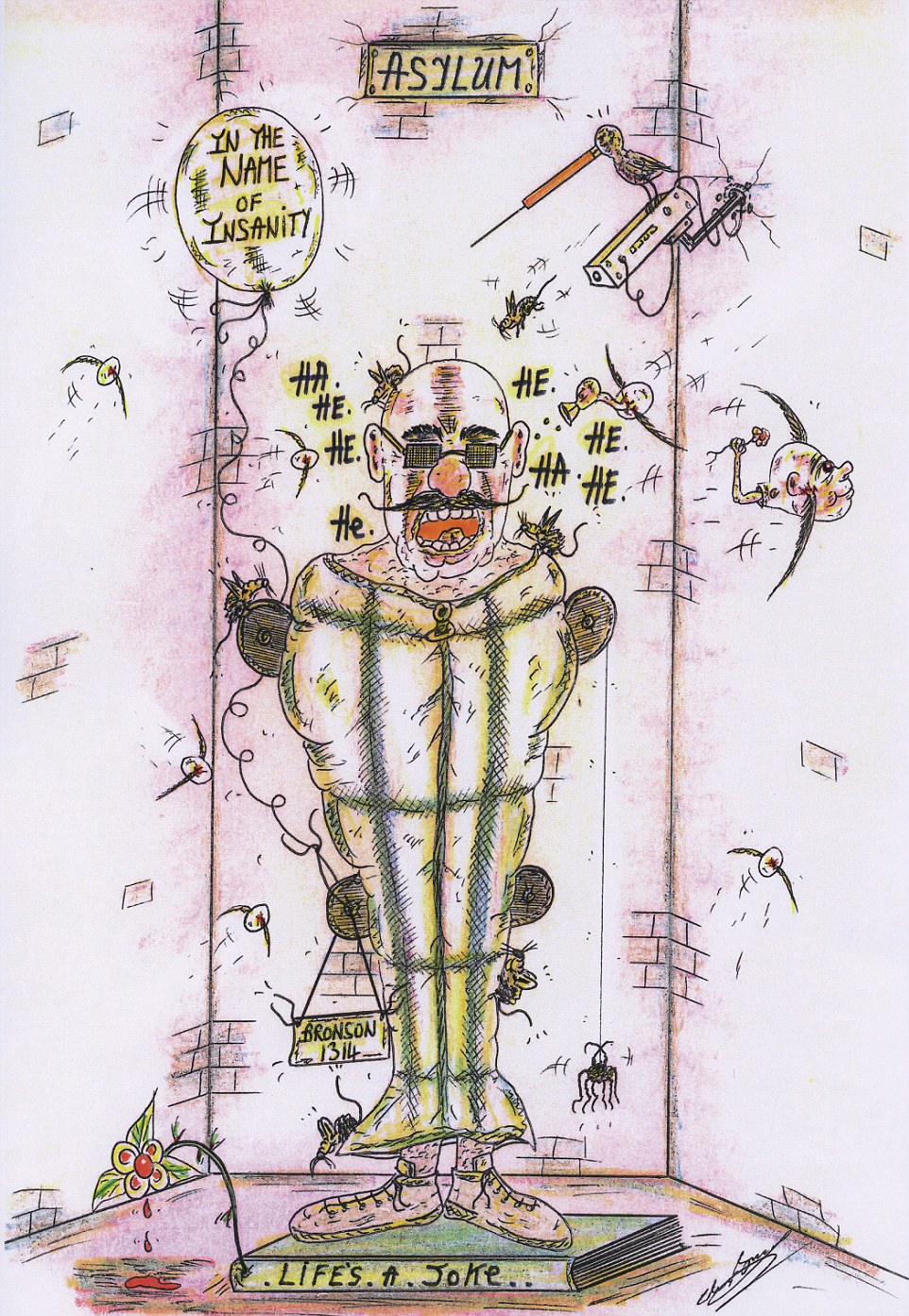 Bronson, 65, has spent 41 years of his life in prison, 37 of those in solitary confinement. He has drawn himself here locked up in a straight jacket in a cell. A sign above his head reads ‘asylum’ and a bird with a syringe for a beak stands on a CCTV camera. A flower appears to be bleeding and the book he is standing on says ‘life’s a joke’. 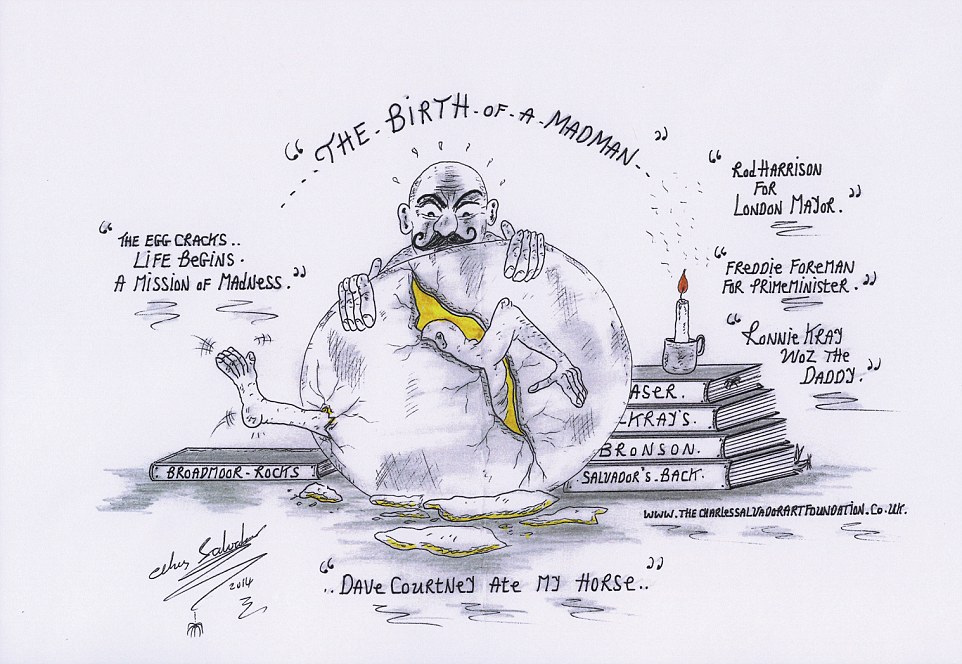 Britain’s most infamous prisoner befriended a number of other high-profile inmates during his decades behind bars. This drawing references several of them, including gangster Freddie Foreman and the infamous Ronnie Kray. The central images appears to show a Bronson-like figure breaking out of an egg. A message above reads: ‘The birth of a madman’ Bronson, now going by the name of Charles Salvador, is currently serving time in HMP Wakefield. This artwork shows him drawn as a winged angel and bursting through a pile of books referencing Broadmoor, the high-security psychiatric hospital where he spent several years 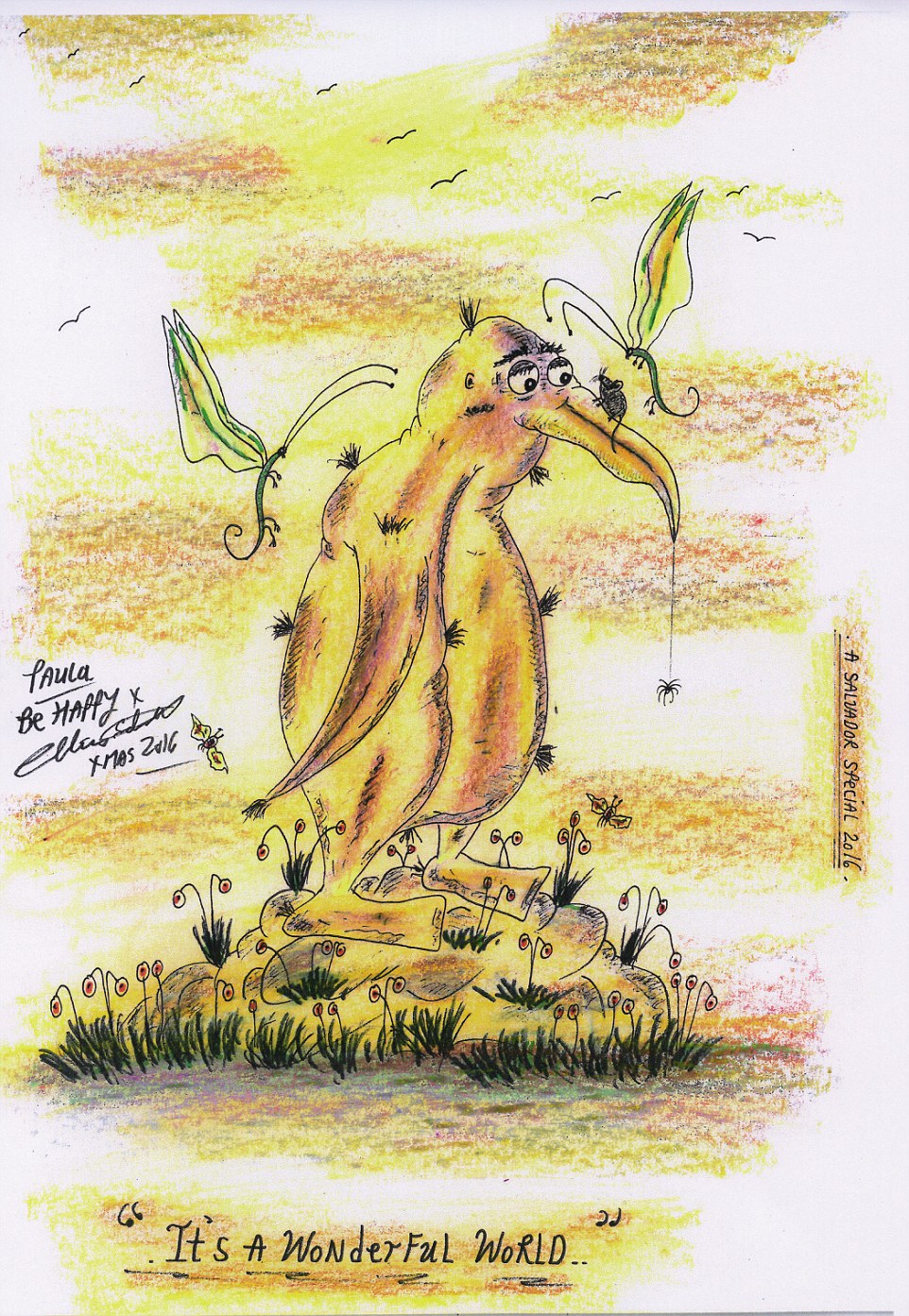 The prisoner married soap star Paula Williamson in November this year. On this card, in an untidy scrawl Bronson has scribbled, ‘Paula, be happy’ along with his signature. It is dated Christmas 2016. The main image is of a bird-like creature with winged insects fluttering in the air around it. Bronson has written across the bottom: ‘It’s a wonderful world’ 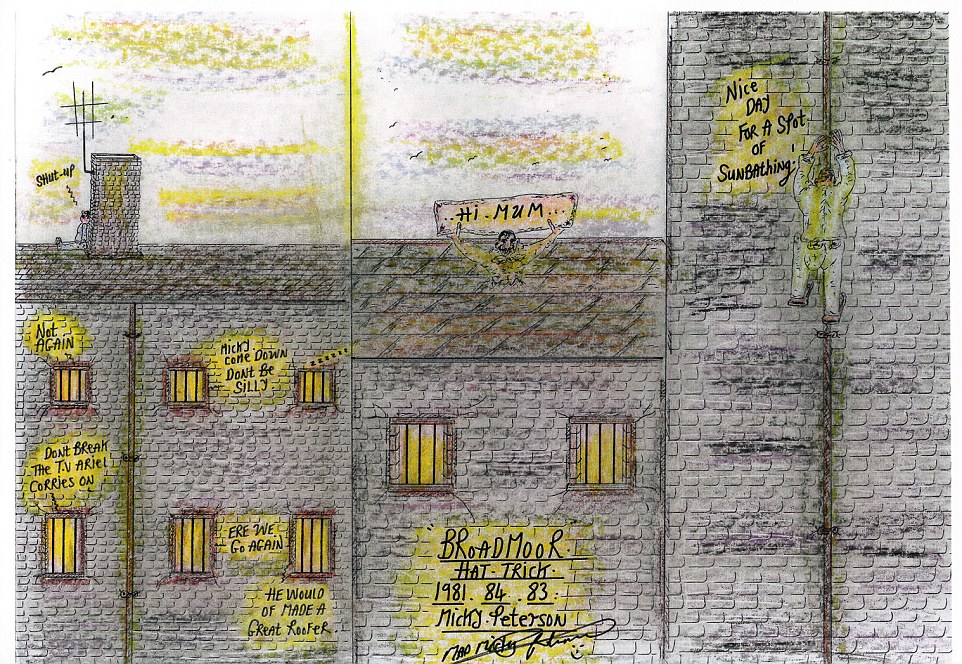 Infamously, during one of his many prison protests Bronson climbed onto the roof of Broadmoor hospital. The incident is depicted in this drawing, which also contains Bronson’s birth name – Micky Peterson. The criminal is shown on the roof of the hospital holding a sign reading, ‘Hi mum’ 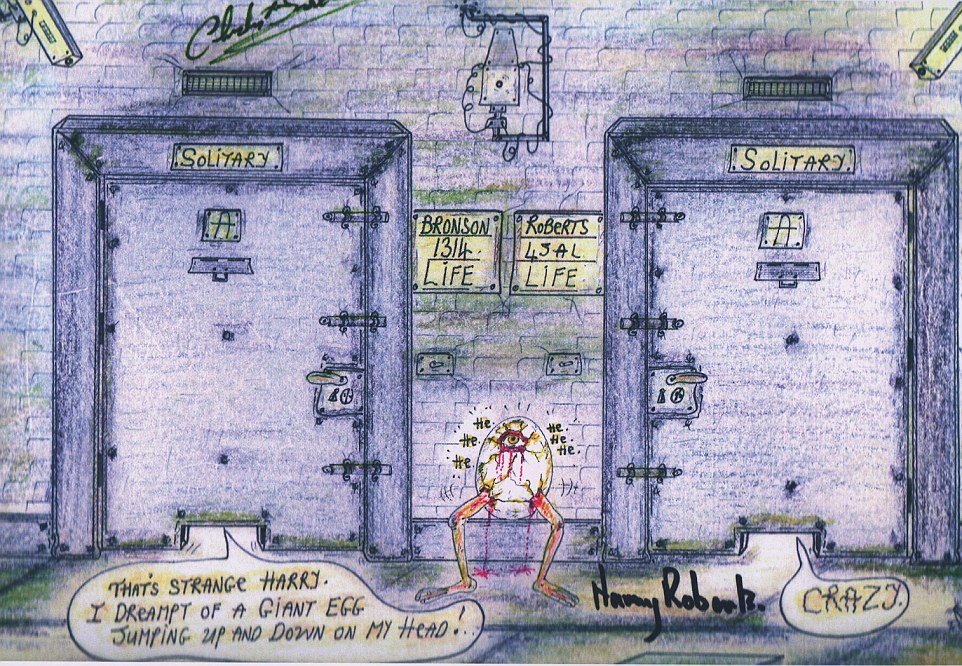 Harry Roberts instigated the Shepherd’s Bush murders in which three police officers were shot dead. Roberts spent nearly 48 years in prison before being released in 2014. This picture shows Charles Bronson and Roberts sharing adjoining cells. The two lifers talk to each other while a strange egg with legs stands outside 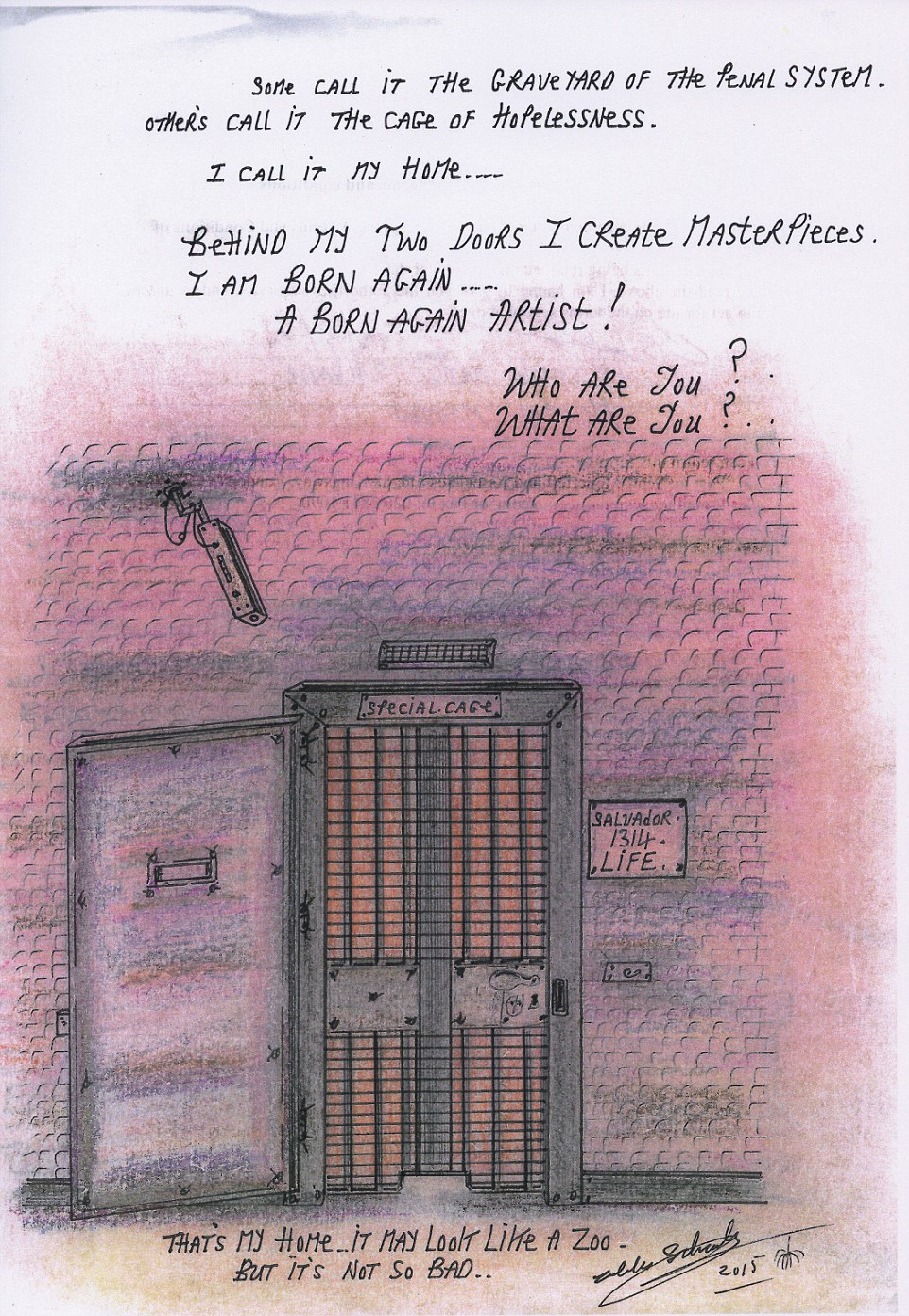 Bronson has spent most of his life in solitary confinement. Here he has drawn his ‘special cage’ along with a sign with his name on and the numbers 1314 – his prisoner number. A message beneath the cell door reads: ‘That’s my home. It may look like a zoo. But it’s not so bad’. The picture is dated 2015 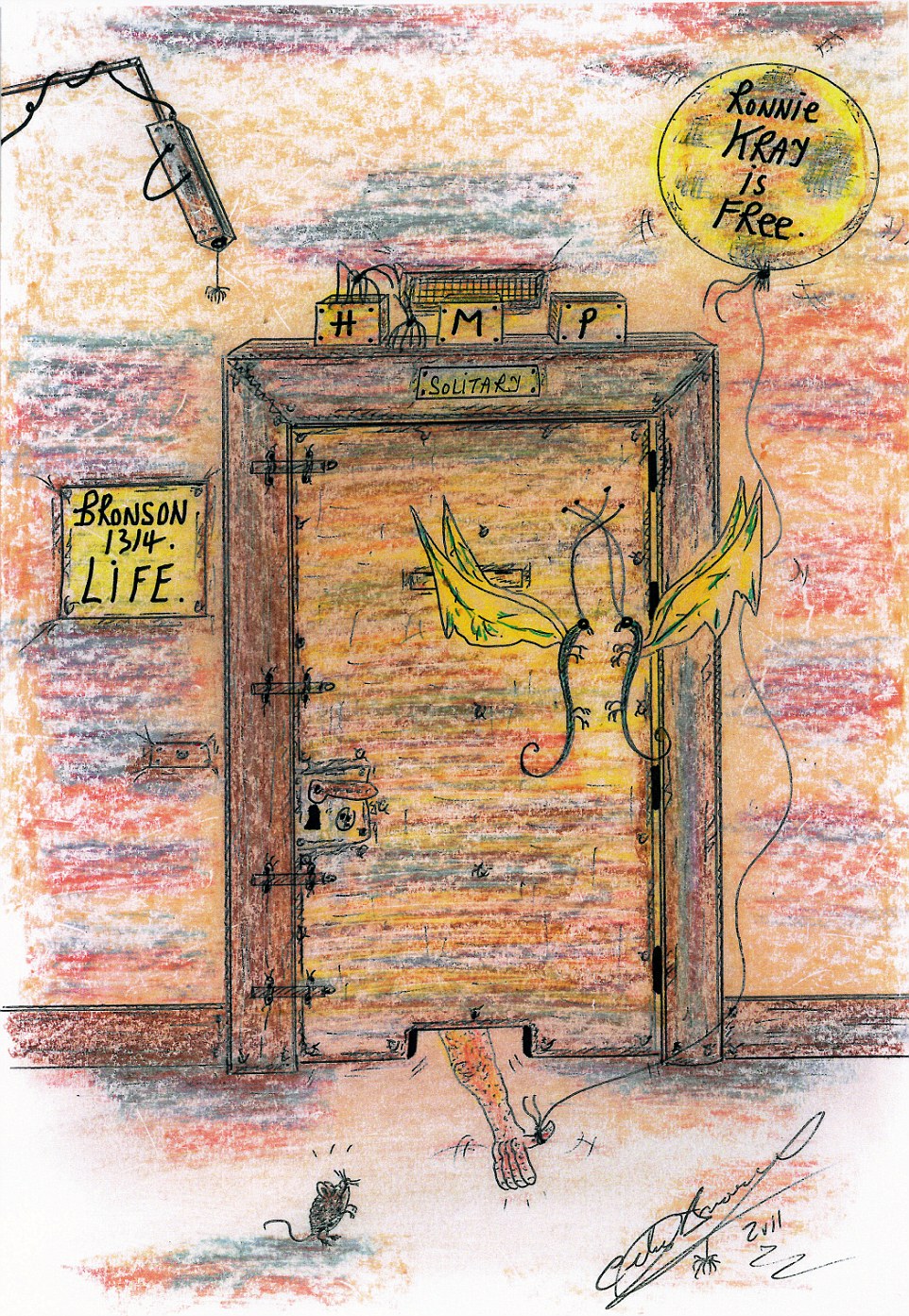 Another of the book’s pictures focuses on Bronson’s long spells in solitary confinement. His arm pokes out from a hole in the bottom of the door and a balloon is tied to his thumb by a string. The balloon has a message on reading: ‘Ronnie Kray is free’, a reference to the notorious London gangster 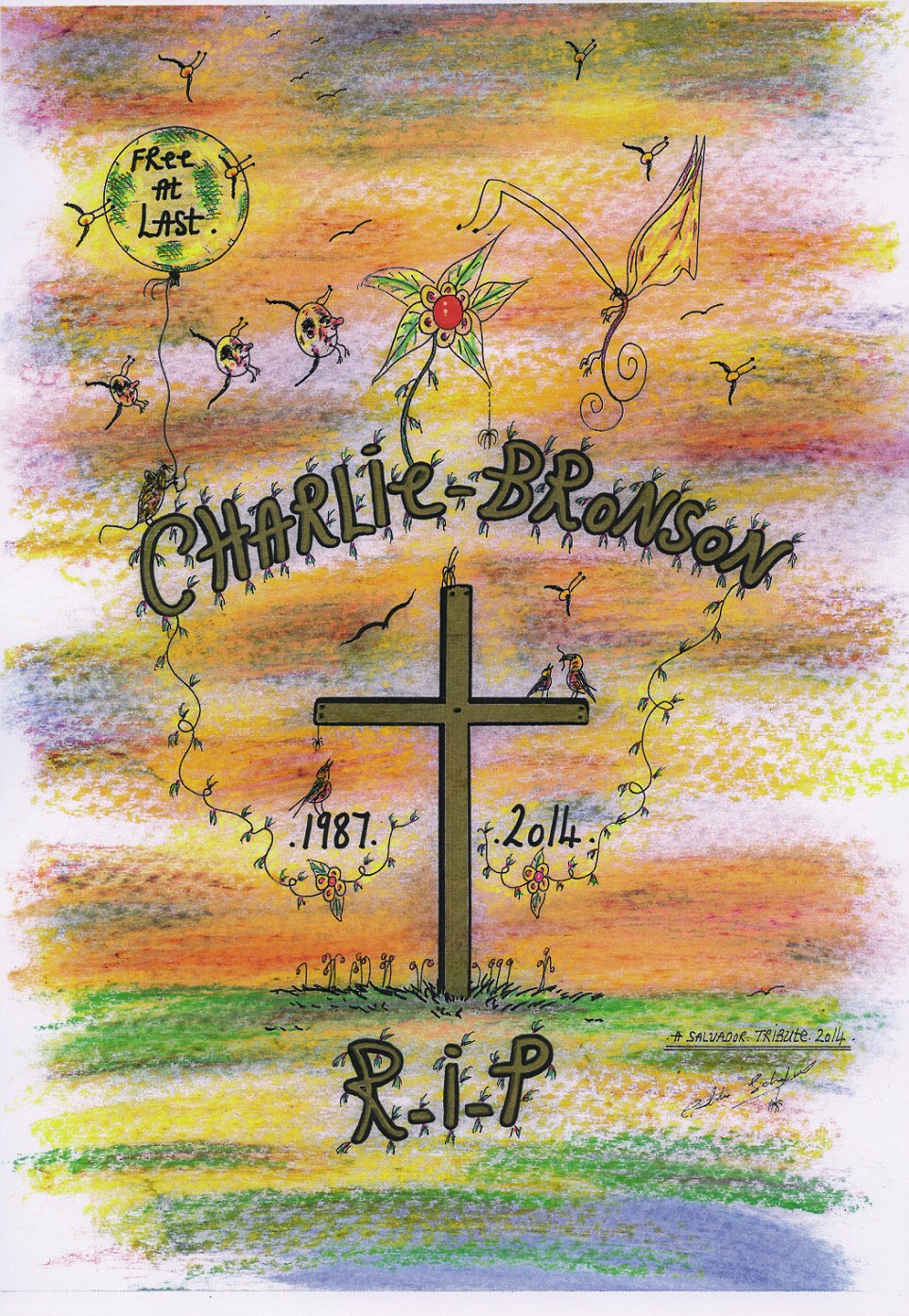 Charles Bronson was born Michael Peterson in 1952 before changing his name in 1988. Then in 2014 he changed it again to Charles Salvador, in honour of the artist Salvador Dali. This picture pays tribute to his former name of Bronson and shows a grave with the name on it alongside the words, ‘free at last’ 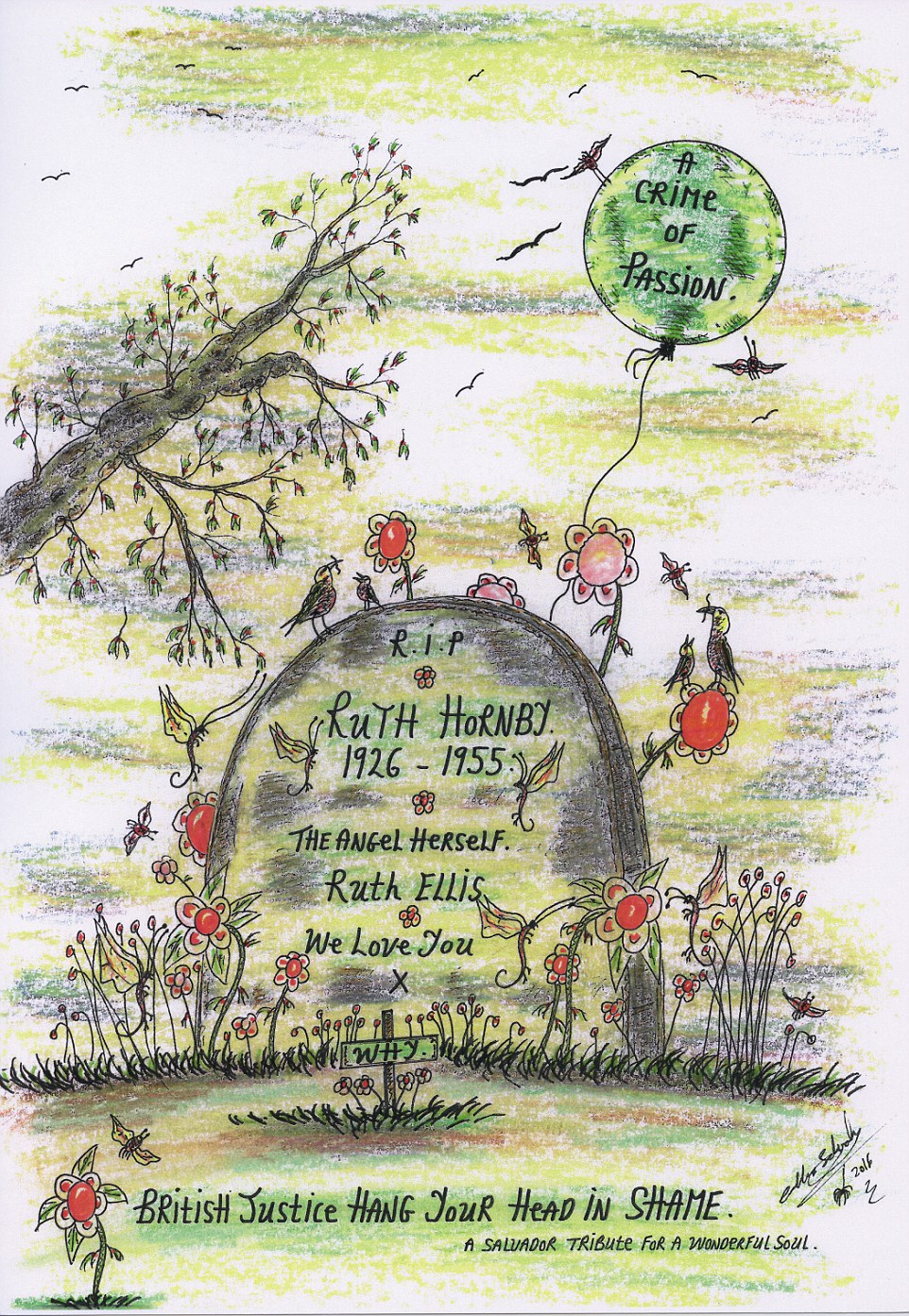 Ruth Ellis was the last woman to be executed in the United Kingdom and Bronson used his art to pay tribute to her. He drew her grave, containing both her birth name of Hornby and the name she later took, Ellis. She was sentenced to death for shooting dead her lover in 1955 and Bronson calls it a ‘crime of passion’ 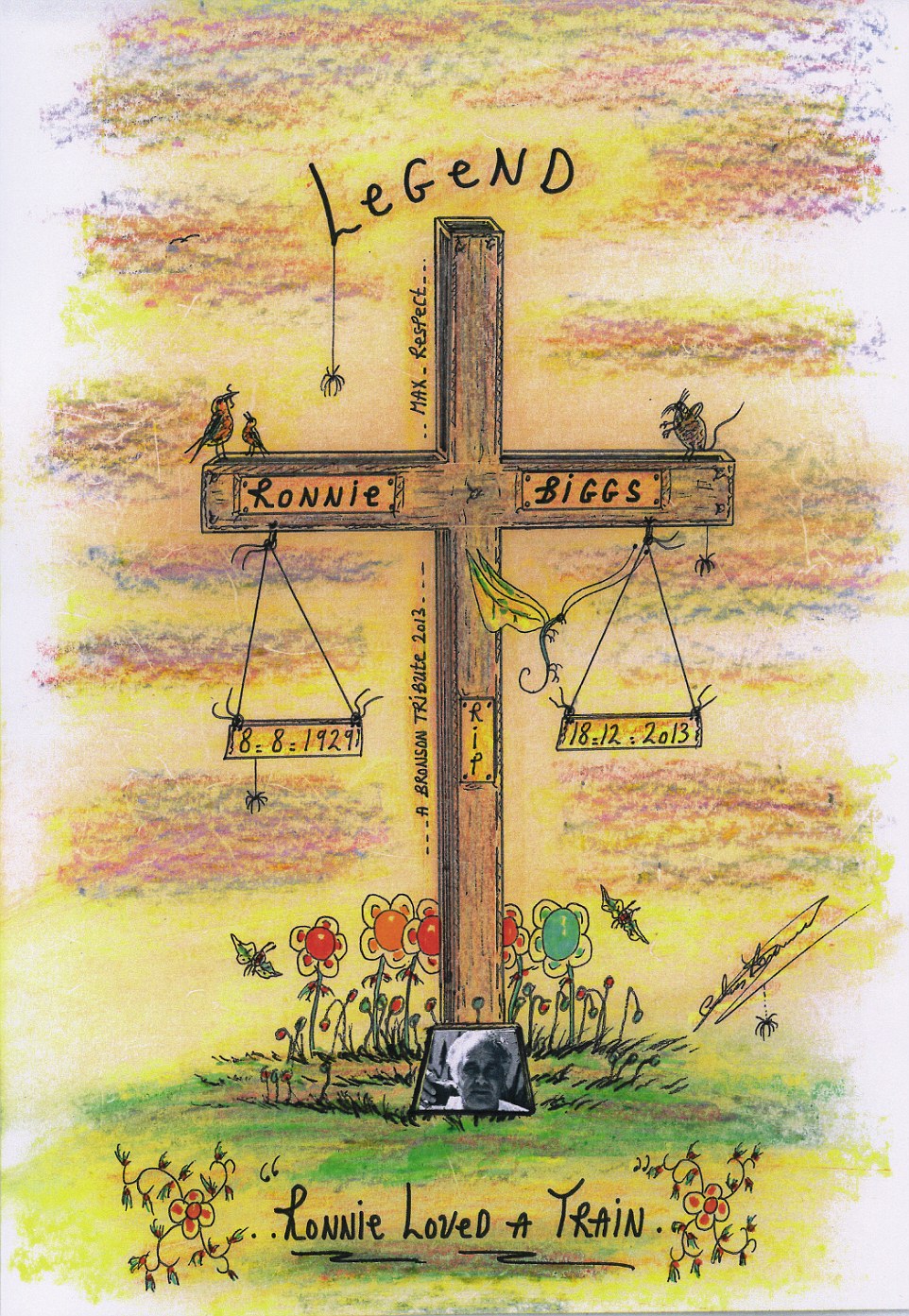 Throughout his life Bronson befriended some of his fellow notorious criminals, including Great Train Robber Ronnie Biggs. He pays tribute to him here, labelling him a ‘legend’ and saying, ‘Ronnie loved a train’. Biggs lived as a fugitive for 36 years following the Great Train Robbery in 1963 but returned to the UK in 2001. He died in 2013 after several years in prison 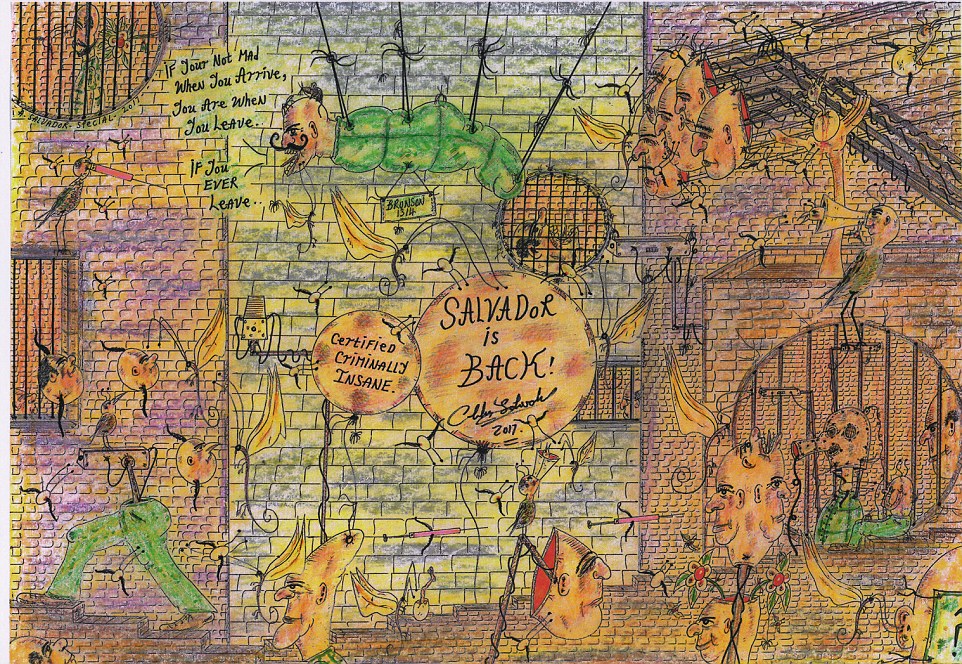 This bizarre doodle shows a figure resembling Bronson strung up from the ceiling while in a green sleeping bag. He is surrounded by birds with syringes for beaks and faces that are not attached to any bodies. Speech coming from Bronson’s mouth reads: ‘If your (sic) not mad when you arrive, you are when you leave’ 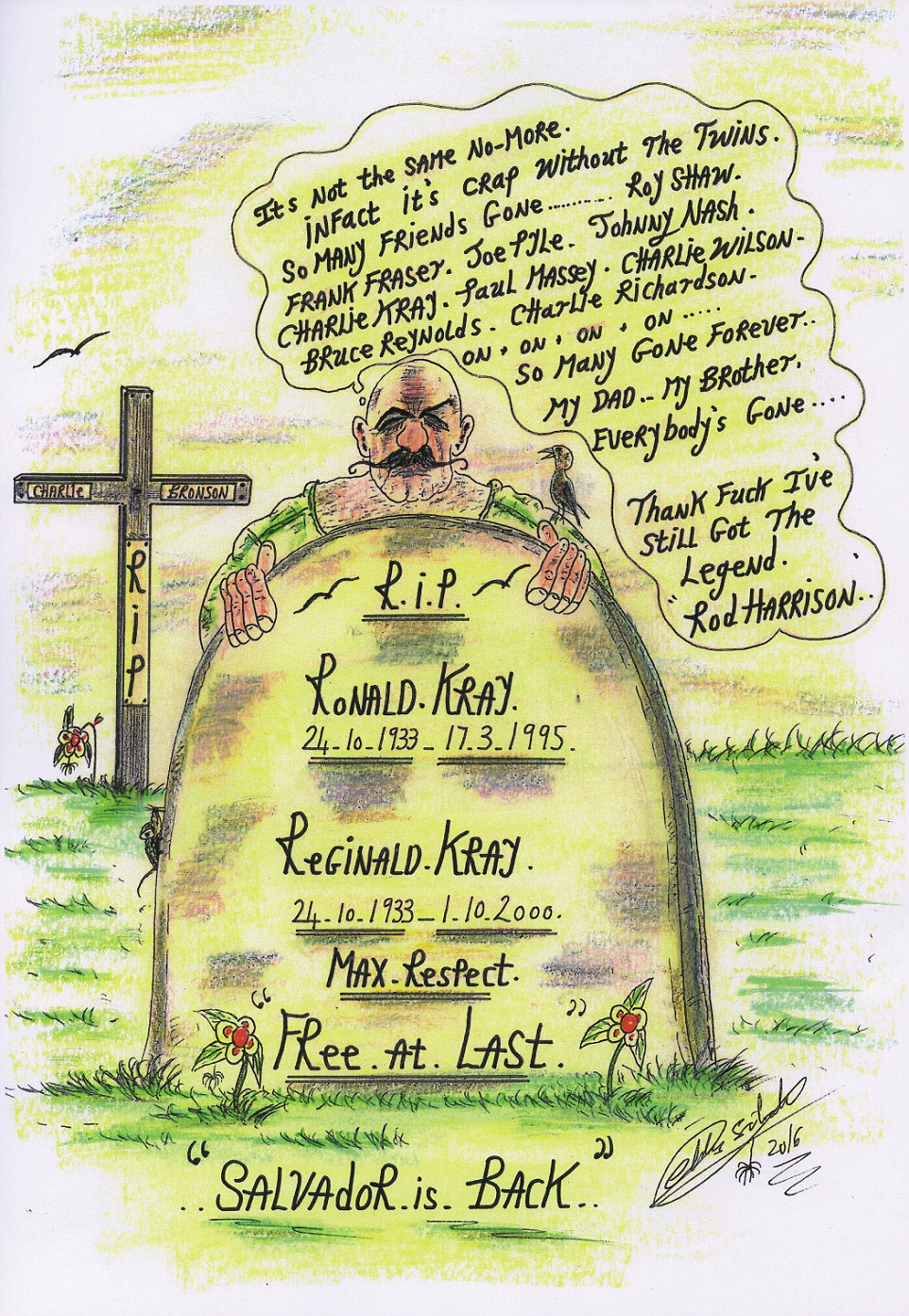 The Kray twins, Ronnie and Reggie, terrorised London during the 1950s and 60s. They were sentenced to life in prison in 1969 and while inside befriended Bronson, who paid tribute to them with this picture. Bronson, standing over a gravestone bearing the twins’ names, laments: ‘It’s not the same no-more’