Inside the most stunning and luxurious penthouses in Australia

Tucked away at the top of Australia’s skyscrapers are some of the most lavish, stunning and luxurious penthouses in the world.

One went on sale in Sydney this week for a staggering $66 million – but what will your buck buy you for that astronomical sum of money?

The Boyd Residence is located at the top of the ANZ Tower in the heart of the CBD spread over three floors with views spanning across the harbour.

Glazed from floor to ceiling, the penthouse in the ANZ Tower in Sydney’s CBD boasts its own  lift, resort-style rooftop pool and secured garage. It’s worth $66m

It boasts its own private lift, resort-style rooftop pool and secured garage and was voted the world’s finest residence in 2017.

The new owner may only get four bedrooms with their money but each one is decked out with marble bathrooms and ‘many grand entertaining spaces’.

The agents, LJ Hooker, brand it as being like nothing else in the world and features double height ceilings throughout the living space and ‘dramatic walls of glass’.

While The Boyd Residence might be the cream of the crop, it is not the only spectacular property available in Australia at the moment. 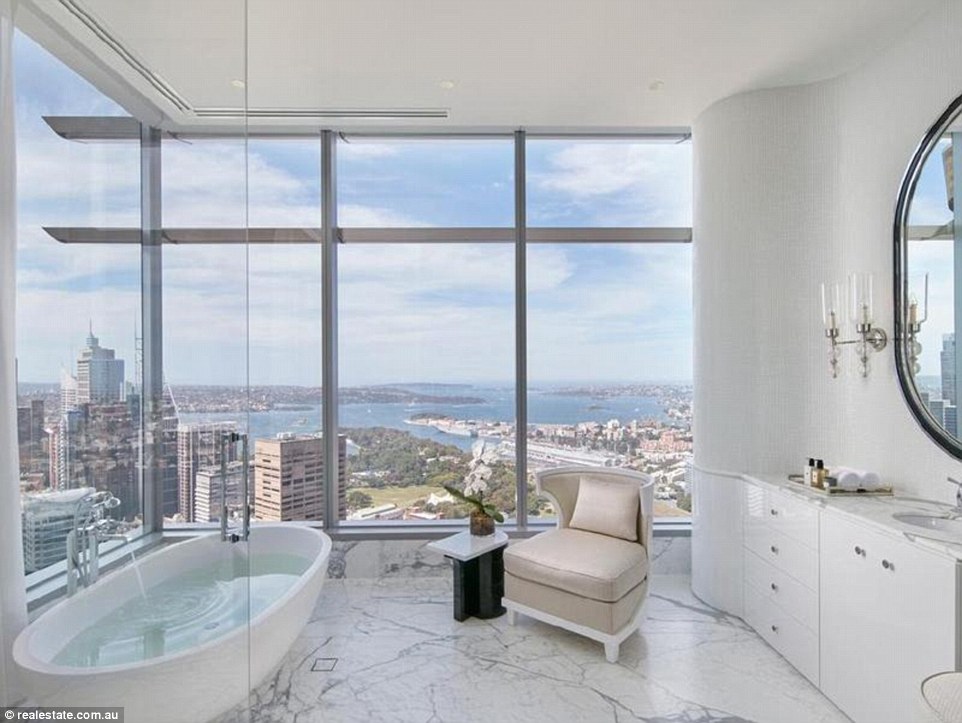 Possibly the best bathroom in the whole of Australia with far reaching views across Sydney harbour, The Boyd Residence might be the most amazing property in world

In Melbourne’s trendy Chapel Street area around South Yarra is the Capitol Grand penthouse which offers views right across the city for $20.4m.

Plans for a helipad atop the 54-storey building have been quashed by the council, according to realestate.com.au. 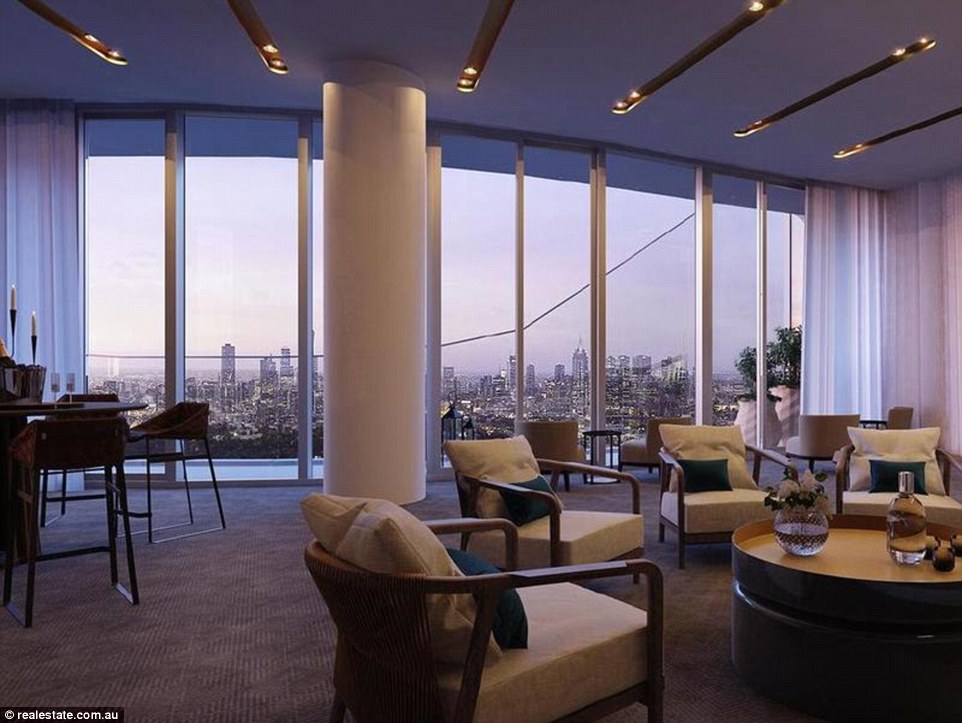 Luxury living at the yet to be completed Capitol Grand penthouse in South Yarra close to the trendy Chapel St is yours for $20.4m

In the complex, the owners benefit from a private club with 25m lap pool, library and a six-star gym.

If one was not enough, the Bennelong building at the edge of Circular Quay in Sydney Harbour, has combined two properties into a double penthouse.

Situated on level 12, this stunning home with arguably the most famous view across Sydney Harbour and the Royal Botanic Gardens is a snip compared to the ANZ Tower at $20m. 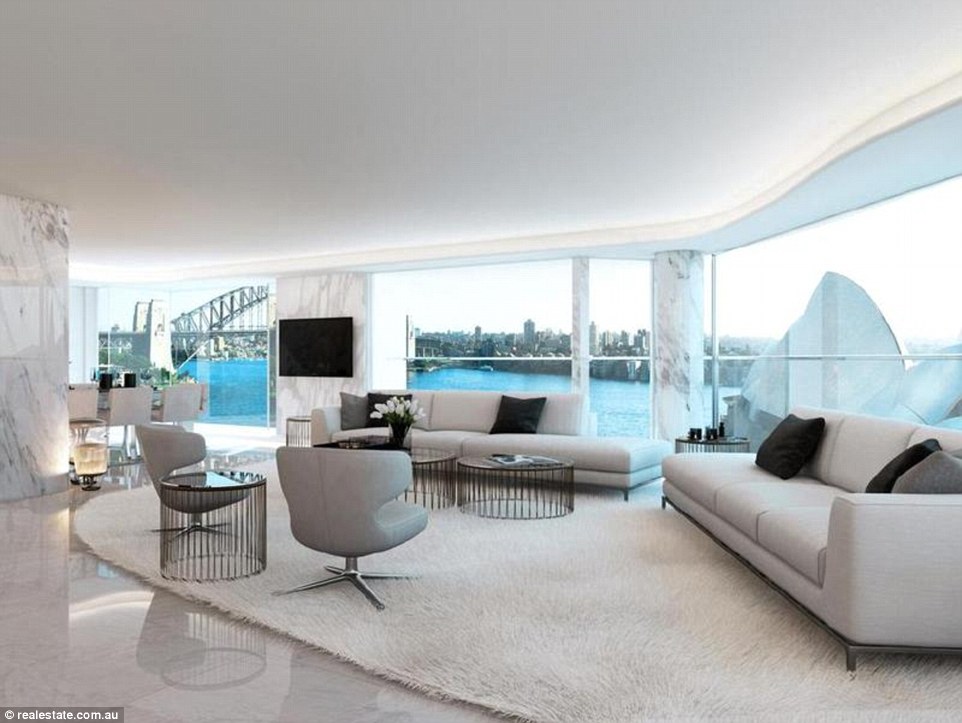 If one was not enough, the Bennelong building at the edge of Circular Quay in Sydney Harbour, has combined two properties into a double penthouse for $20

The three-bedroom, four-bathroom apartment is spread across a floorspace of 363sqm.

Luxury, bespoke design and panorama city views are all in abundance at the octagonal penthouse in another South Yarra property in Melbourne’s south east.

The penthouse was desgined by Shay and Dean, winners of season 11 of The Block netting the couple $650,000 as the property sold for $2.3m – a price which is similar to its market price now.

The home will give you three bedrooms and three bathrooms across the whole floor and its own movie theatre. 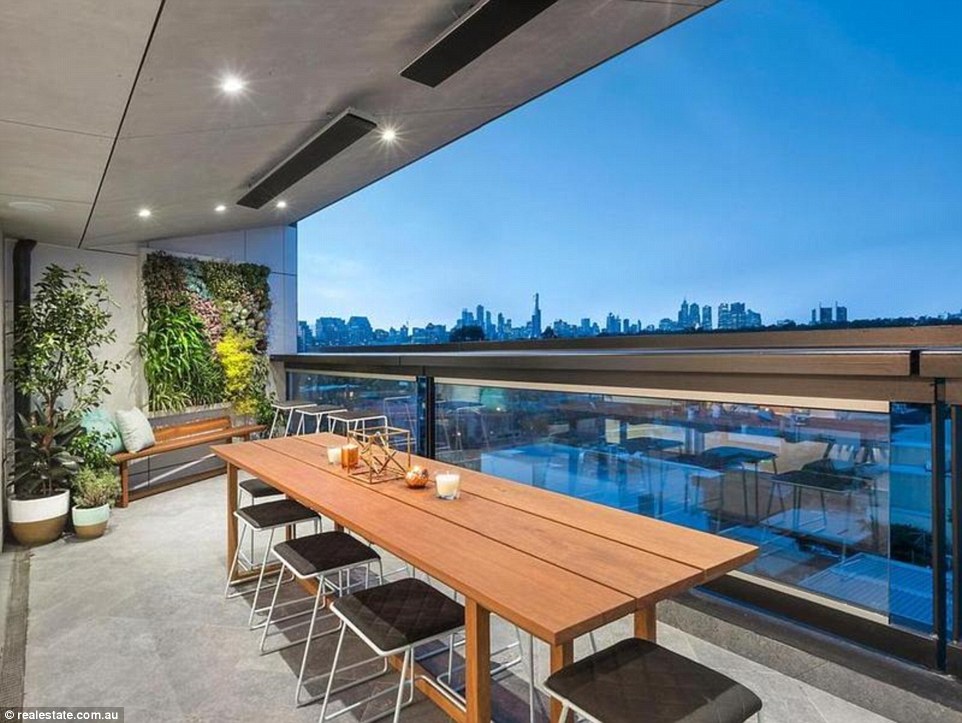 The South Yarra penthouse was the winning design on season 11 of The Block and features al fresco terrace dining for $2.3m

It also offers covered al fresco dining on its north-facing terrace to go alongside stone benches, an integrated coffee maker, wine fridges and a butler’s pantry.

Perth and Adelaide also feature with some impressive properties showing luxury is not just found in Australia’s big two cities.

Perched on the banks of the river on the South Perth Esplanade, the $8m fourth-floor penthouse boast four beds, four bathrooms and views across the city skyline. 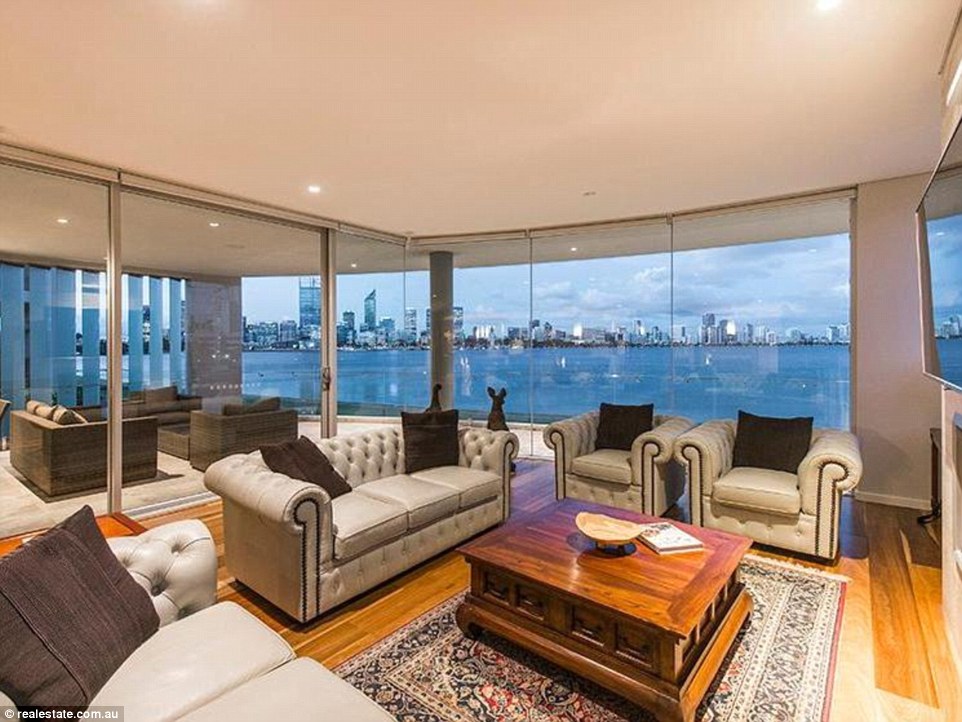 Perched on the banks of the river on the South Perth Esplanade, the $8m fourth-floor penthouse boast four beds, exclusive entertainment area and terraces

On the top floor the property has its own exclusive entertainment area and terraces.

Heading back east and Adelaide gets in on the act with the $2m Flinders Loft.

For the price the new owner will get three luxurious bedrooms and glazed entertainment and living spaces, a gourmet kitchen and top of the range bathroom. 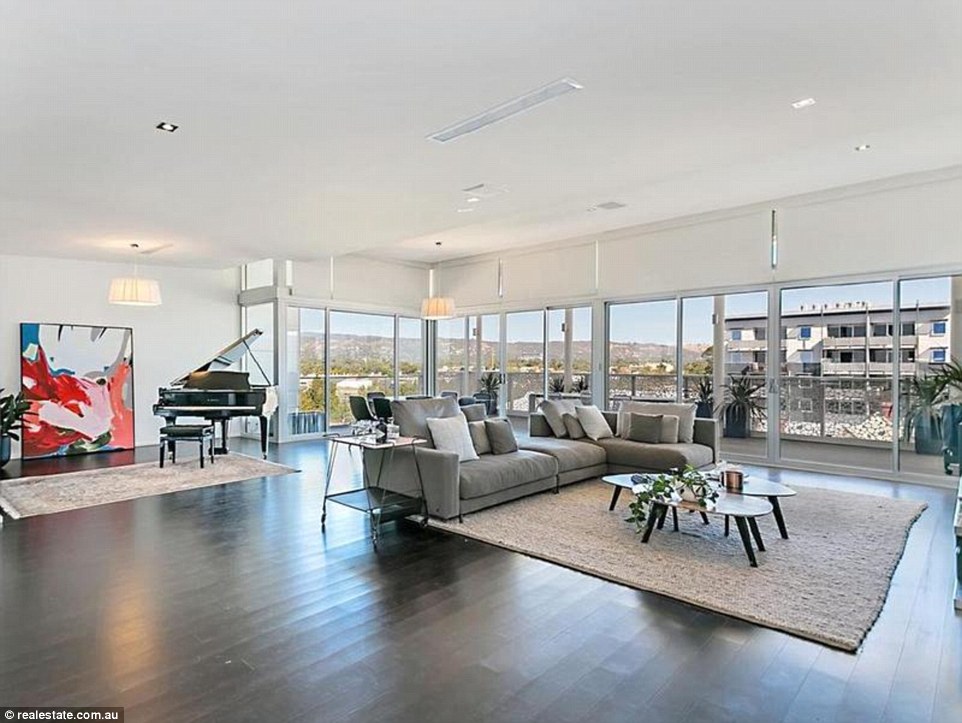 Adelaide gets in on the act with the $2m Flinders Loft in the heart of the city with three bedrooms, open space living and entertainment areas

A second penthouse from The Block is also back on the market with a $2.5m guide price.

Located in Port Melbourne, it featured on season 12 of the show and was built by couple Chris and Kim. 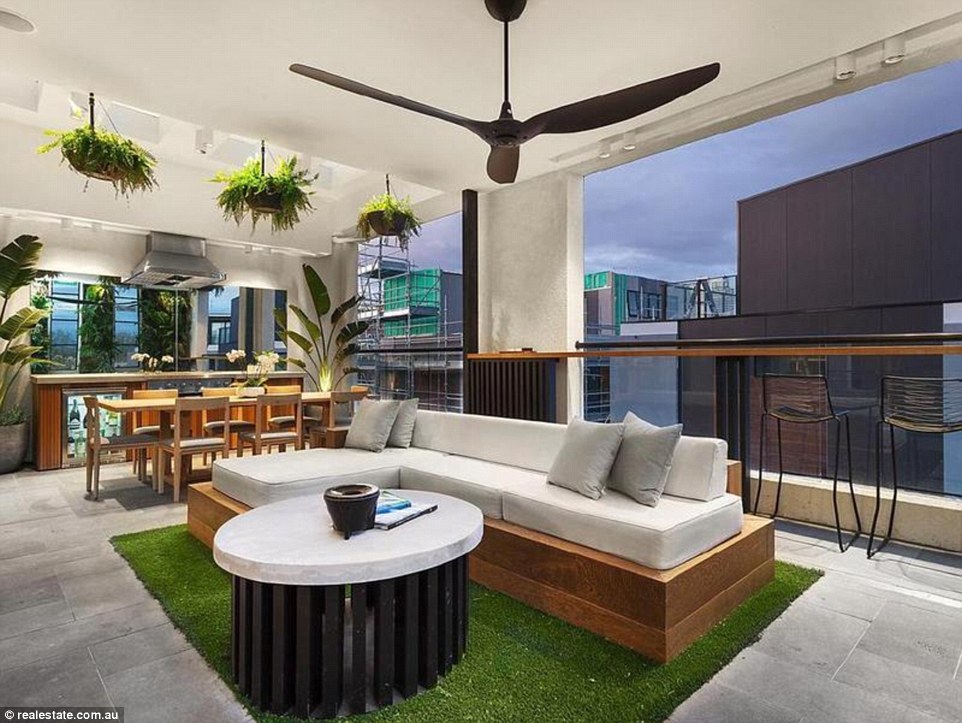 Located in Port Melbourne, this is another penthouse to feature on The Block and is currently on the market for $2.5m

Inspired by the New York warehouse style apartments the property is on the edge of one of Melbourne’s up and coming areas.

And finally, there are three top of the range homes in Queensland from Surfers Paradise, West End and Main Beach.

The Main Beach property is expected to fetch more than $5m in the sought after Palazzo Versace. 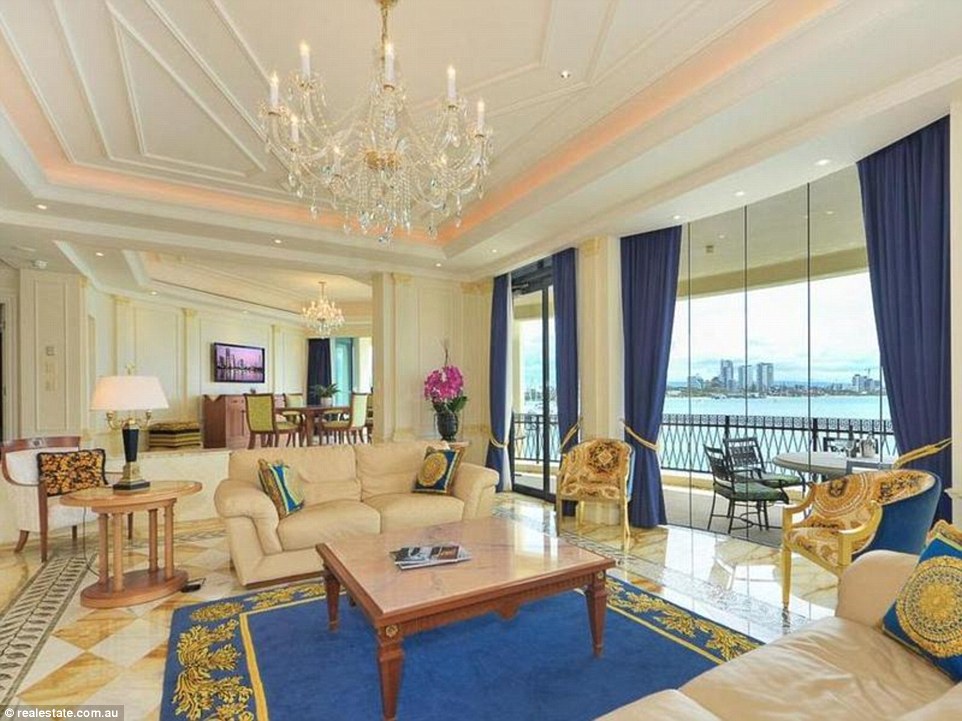 To go with the lavish decoration, three king size bedrooms the buyer will own their own marina berth for the millionaire’s yacht.

The design is topped off with a marble kitchen and attention to detail which might be a little too garish for some but luxurious nonetheless.

Slightly further along the beach in Surfers Paradise is the three-floor apartment at the top of the La Sabbia building. 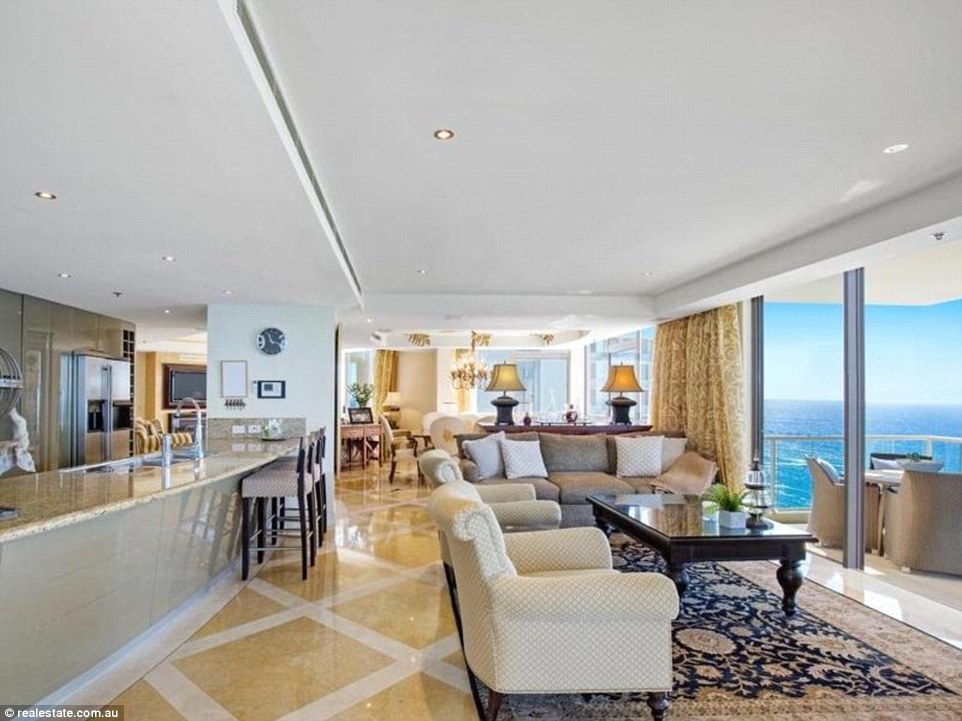 The $5.5 La Sabbia penthouse on the Gold Coast is designed based on a New York-Milan style and features a private rooftop

Designed around a New York-Milan style the property will not be available for anything under $5.5m.

There is a unique and private rooftop and entertainment deck for parties and a private pool for relaxing in.

The new owner will get four bedrooms, three with ensuites and each with their own terrace and the kitchen features sleek timber cabinets and marble benches. 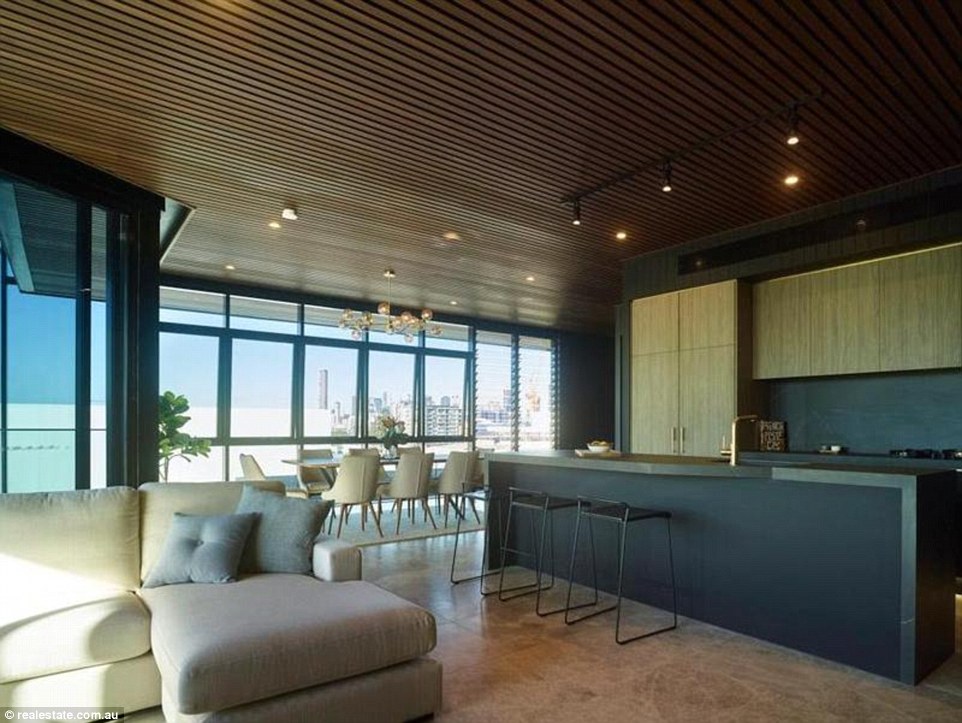 The ‘no expense spared’ decor at this West End home in Brisbane will set the owner back a nice cool $3.2 million

Finally, there is a Brisbane property which boasts a ‘no expense spared’ decor with exotic and opulent finishes.

‘This is a penthouse that is both innovative and comfortable. Bringing the outside in perfectly,’ the agents say.