The Nolan sisters were in the mood for dining on Christmas Day after arranging a lavish party for their nearest and dearest at an 18th century Georgian manor house, and there was probably plenty of dancing involved too.

With 32 guests in attendance at the Grade I listed venue, the sisters laid on an extravagant candlelit luncheon within a portrait filled dining room festooned with decorations and featuring two elaborate Christmas trees.

Lovely: The Nolan sisters were in the mood for dining on Christmas Day after arranging a lavish party for their nearest and dearest at an 18th century Georgian manor house

Sharing photos from the day with Instagram followers, Linda admitted the party was arranged after COVID-19 restrictions prevented them from celebrating Christmas as a family in 2020.

She wrote: ‘They say good things come to those who wait and I couldn’t agree more…

‘After spending last Christmas in lockdown, we’ve finally managed to make up for lost time and have a Very Nolan Christmas! Here’s to looking and moving forward.’

In a second post she thanked the staff for their service throughout the day, writing: ‘Massive thank you to the incredible team at @lytham_hall for hosting 32 of us for Christmas dinner yesterday… The room, the food and the hospitality was absolutely beautiful!’

While the family attended en-masse, Nolan sister Denise was notably absent as she is based in Los Angeles with her partner Tom Anderson. 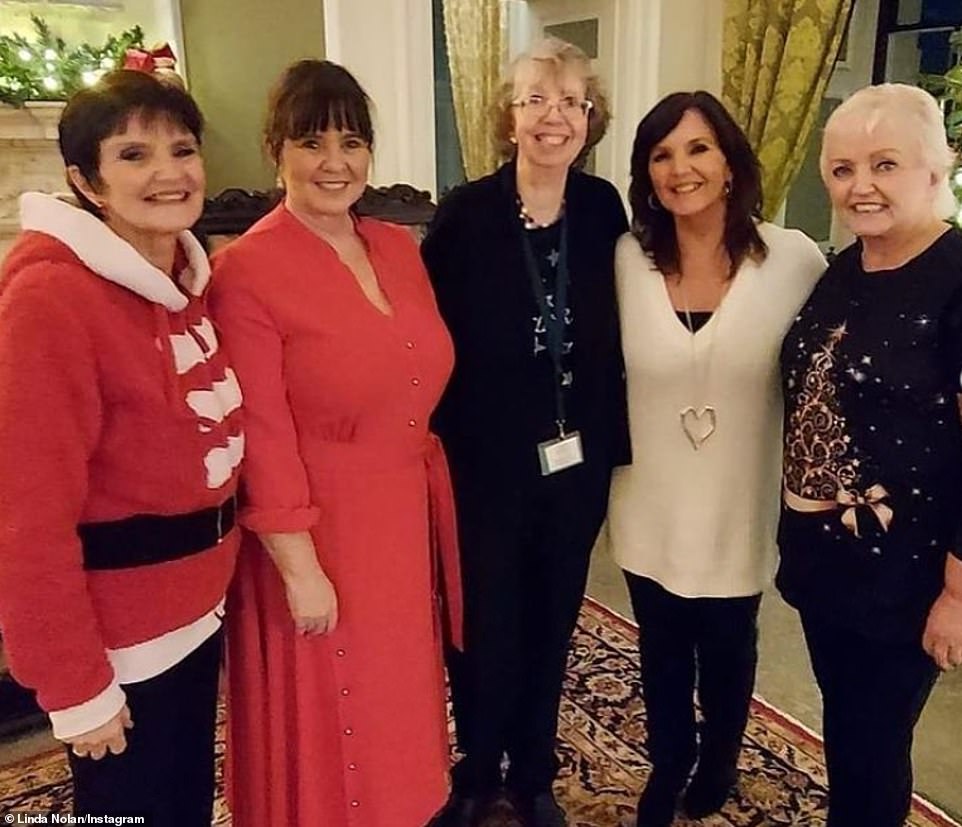 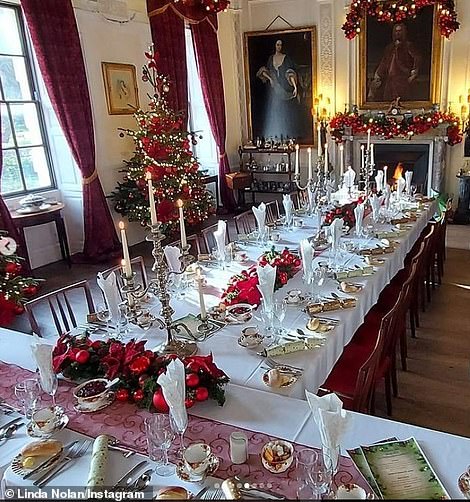 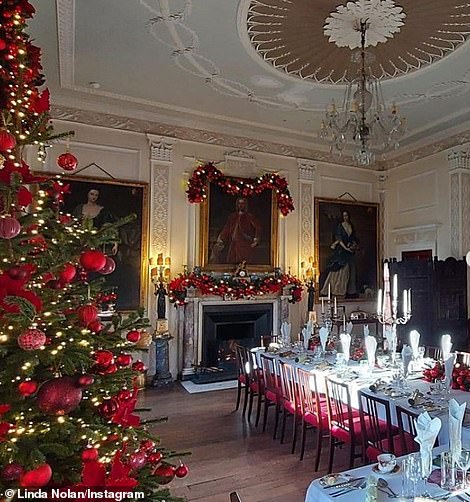 Stunning: With 32 guests in attendance, the sisters laid on an extravagant candlelit luncheon inside a portrait filled dining room festooned with decorations and featuring two elaborate Christmas trees 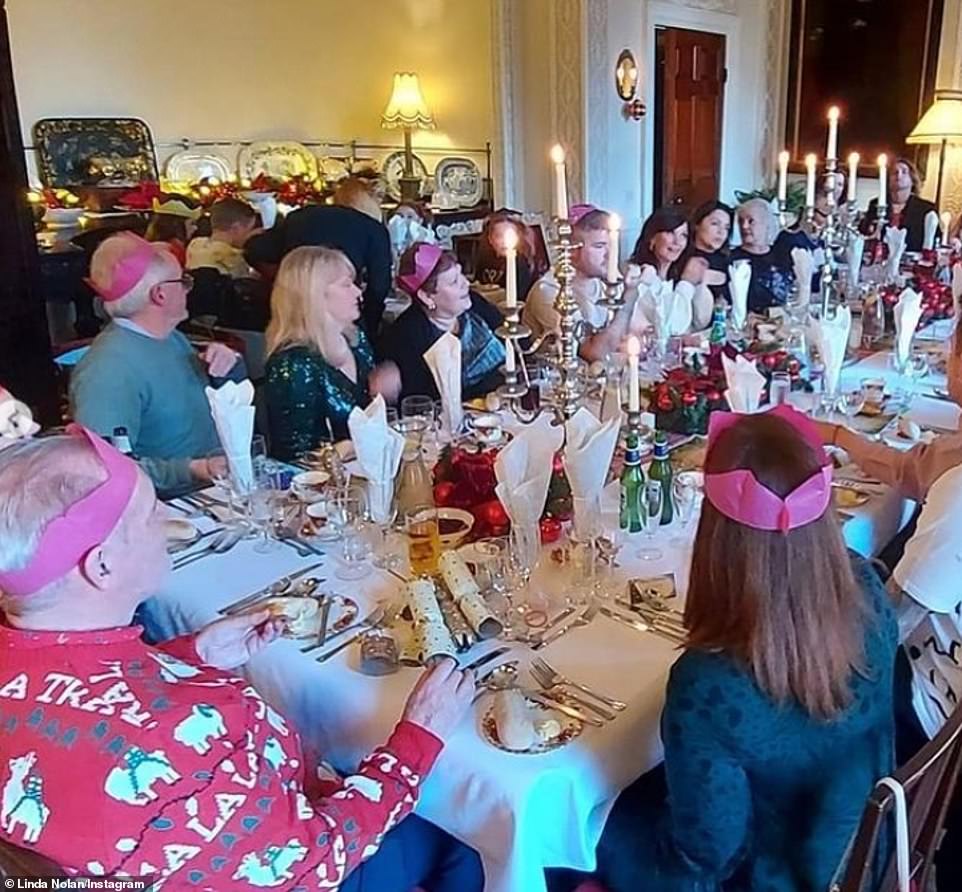 Here we go: Friends and family gathered round the enormous dining table as dinner was served on Christmas Day

The Christmas party comes after Coleen revealed she would be spending the day with former husband Ray Fensome – and her new mystery boyfriend.

Coleen was married to musician Fensome for 11 years and they have a daughter Ciara, 20.

She recently revealed she had been dating a man she met online five months ago and told Woman’s Own: ‘He’s lovely and he’s going to be spending Christmas with us.

‘He’s met all the kids and family and he’s met Ray – and everyone gets on. I can’t tell you his name because it’s early days and I just want to keep it to myself for now.

‘In a way it’s what I wasn’t getting from my marriage. He’s very like me – he’s romantic and tactile and we’ve got the same interests. It’s been great.

‘My kids are all settled and now it would be lovely to think I could have someone for me for the rest of my life – and hopefully it’s him!’ 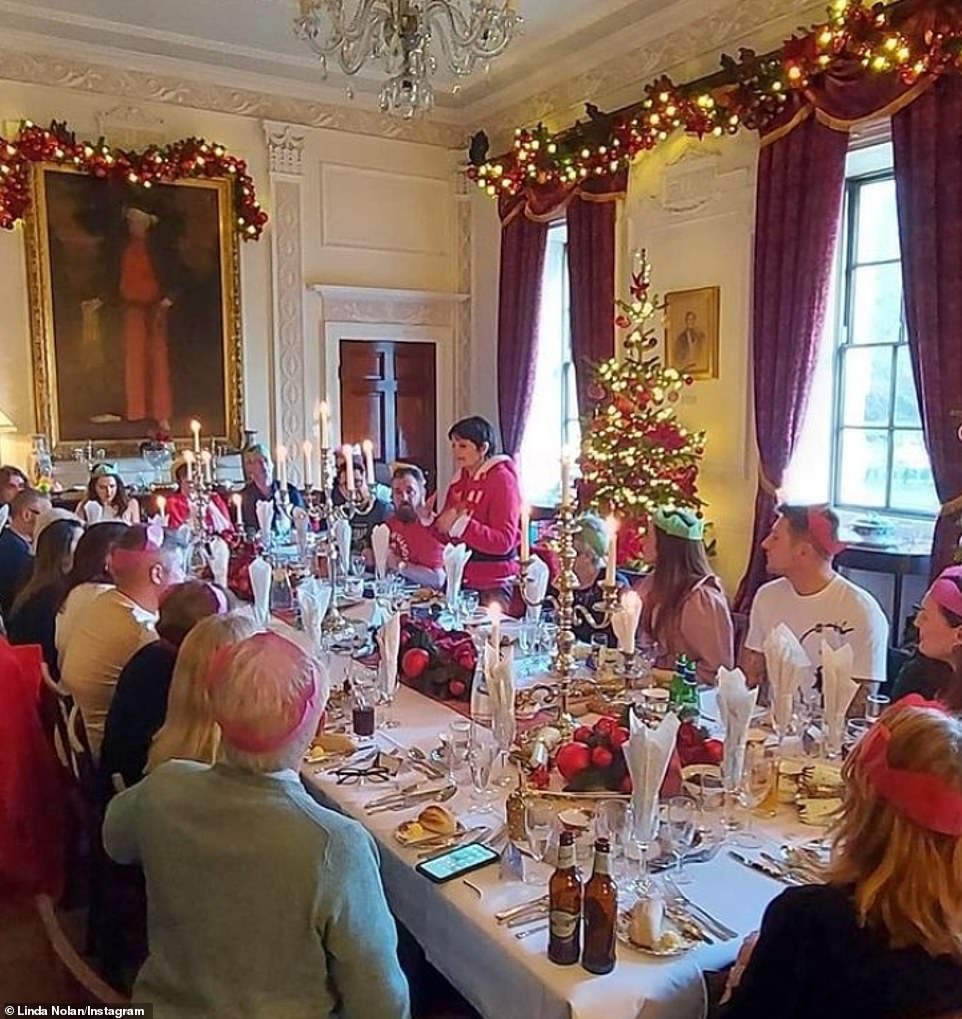 Thanks for coming: Anne Nolan is pictured giving a speech ahead of Christmas lunch with her loved ones 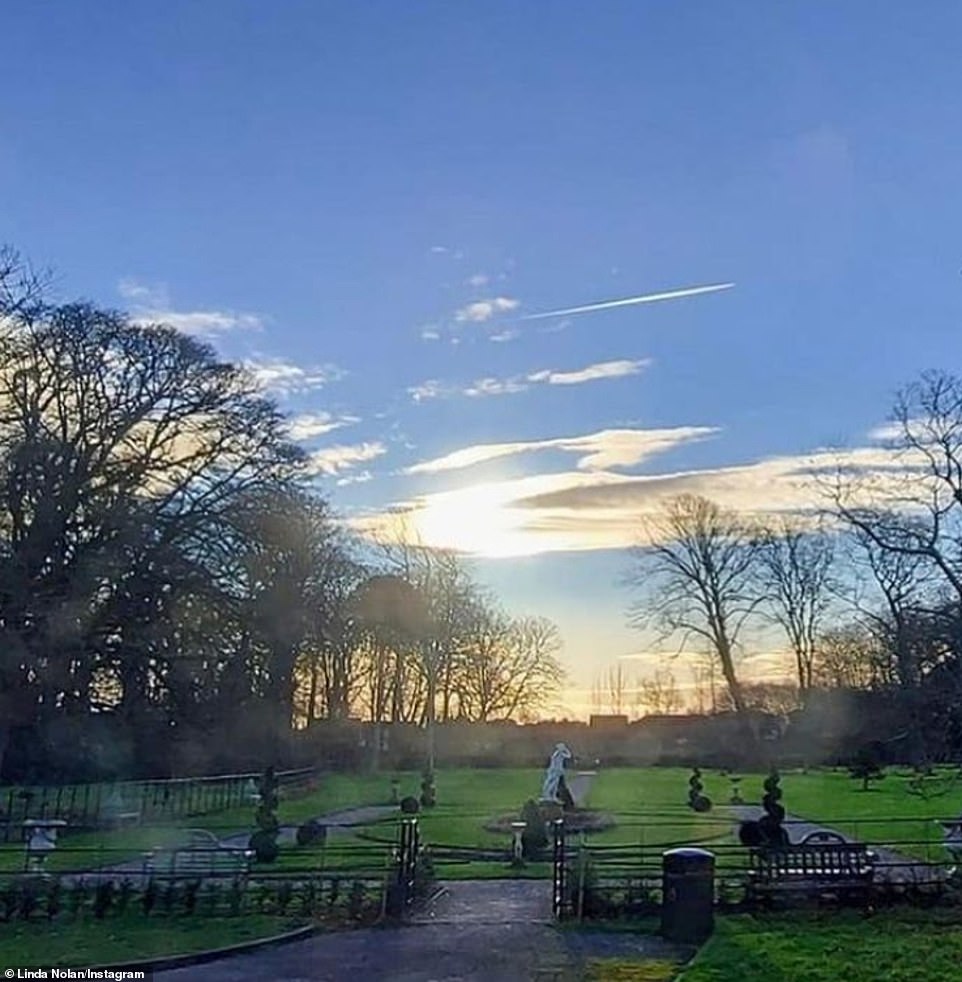 Meanwhile sisters Anne and Linda continue to fight separate battles against cancer, after being diagnosed within weeks of each other.

Linda was first diagnosed with stage three cancer in 2005 after finding a lump in her breast, but was given the all clear a year later.

However 10 years later she discovered the cancer had spread to her hip, before also being found in her liver in May 2020.

Offering an update on her treatment, she said: ‘I have a CT scan coming up and after that, I’ll get the results from my oncologist.

‘Every time, I worry if it’s spread again. I’m scared of dying. There’s so much to live for. You realise that when you’ve been through all that I have. Every day is a gift.’

Linda revealed she has to take four chemotherapy tables first thing in the morning and then another four before bed. 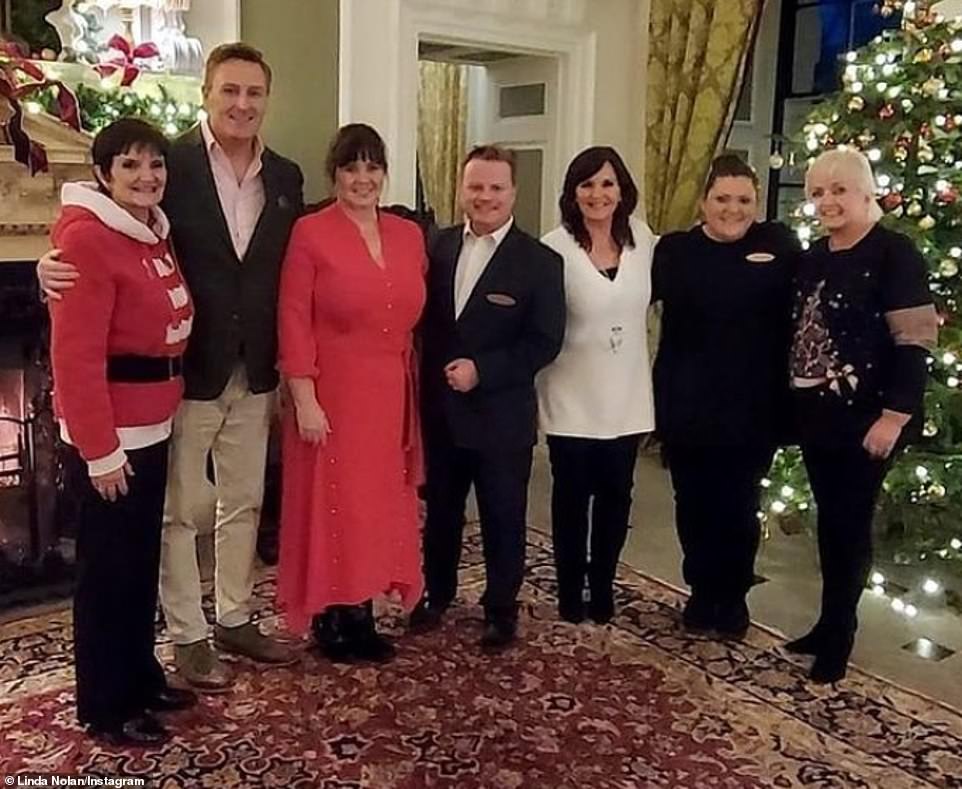 Happy days: The sisters posed for photos with staff at the country house after arranging the festive spread for their loved ones 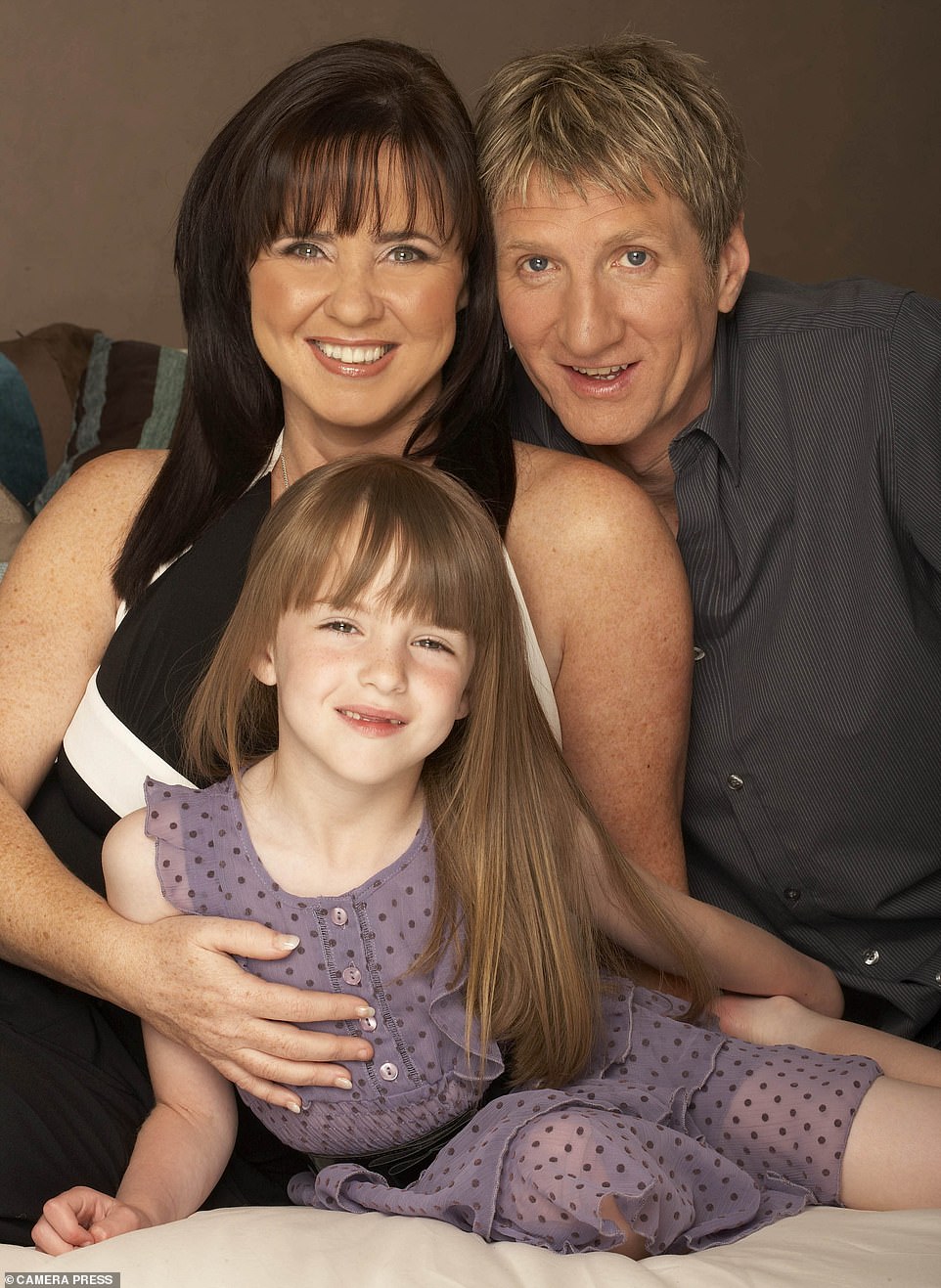 Modern family: The Christmas party comes after Coleen revealed she would be spending the day with former husband Ray Fensome – and her new mystery boyfriend (pictured with Ray and their daughter Ciara, who is now 20)

The media personality’s late husband Brian Hudson died of skin cancer in 2007 and she said she always thinks that he would ‘sort it’ if he were here.

Linda said: ‘When I had cancer in 2006, I’d wake up in the night feeling rubbish and he’d rub my back, giving me what I needed.’ 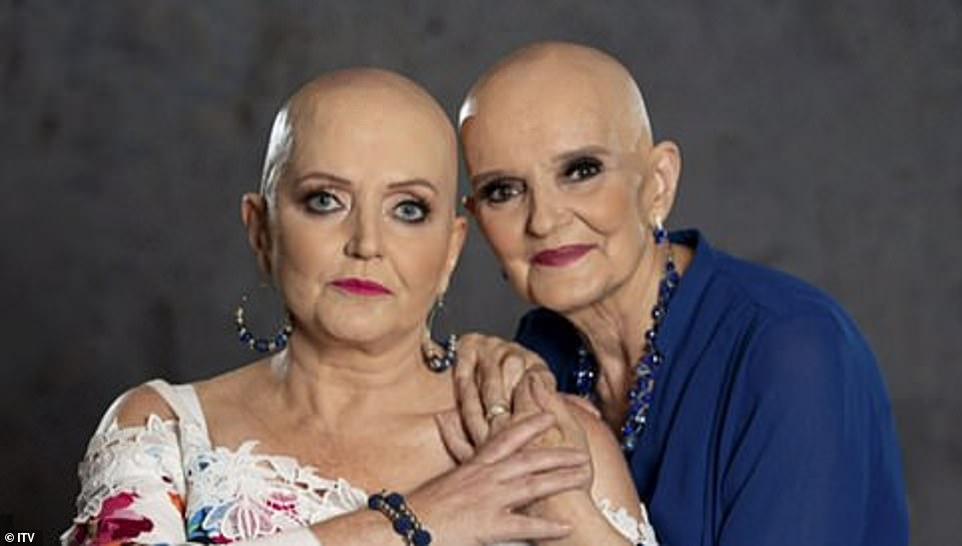 Fear: Meanwhile sisters Anne and Linda continue to fight separate battles against cancer, after being diagnosed within weeks of each other

Anne’s diagnosis came 20 years after she was first diagnosed with the disease in 2000, but in December 2020 the former singer said her cancer has ‘disappeared’ after undergoing a course of chemotherapy.

Nolan sister Bernie underwent chemotherapy and a mastectomy and announced in February 2012 that she was cancer-free.

However, months later she shared the heartbreaking news that her cancer had spread to her brain, lungs, liver and bones. She died in July 2013. 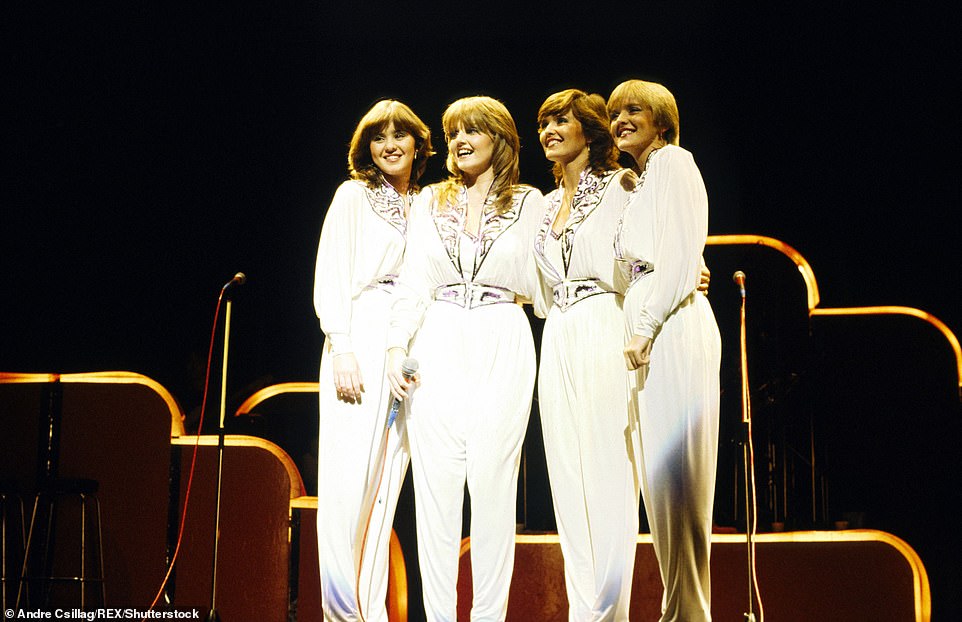 In the mood for dancing:  Coleen, Maureen, Bernie and Linda pictured L-R performing in 1981