At a packed nightclub in Melbourne’s trendy Prahran, revellers party into the early hours, unaware a Covid-infected clubber is dancing among them.

Pictures taken from inside Circus Bar, on Commercial Road in the city’s southeast, show groups letting loose, as they should, after restrictions were eased in March and dancefloors re-opened.

But one patron was unknowingly infected with the highly contagious B.1.617 double mutant Indian strain while partying until 4am at three bars, in a night which began with cocktails at a bar called ‘Three Monkeys’ on nearby Chapel Street.

There are now fears that the infected person who attended Circus Bar, Three Monkeys and Somewhere Bar, has sparked a super-spreader event.

A surge in case could see Melbourne’s Covid outbreak balloon far beyond the 26 official cases that on Thursday saw the Victorian government announce the state’s fourth lockdown since March 2020.

The outbreak began when an Australian who returned from overseas, without the virus, contracted it in Adelaide’s hotel quarantine – before testing negative and flying home to Melbourne on May 4. 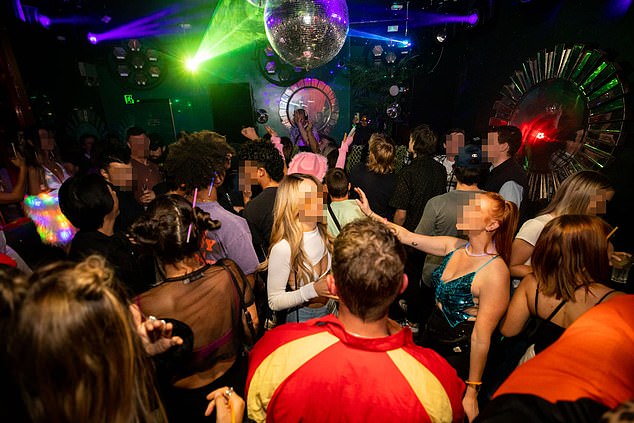 Women dressed in fluro bikinis and playsuits can be seen dancing under a mirror ball in a private room at Circus Bar, alongside men wearing singlets, sunglasses and bucket hats 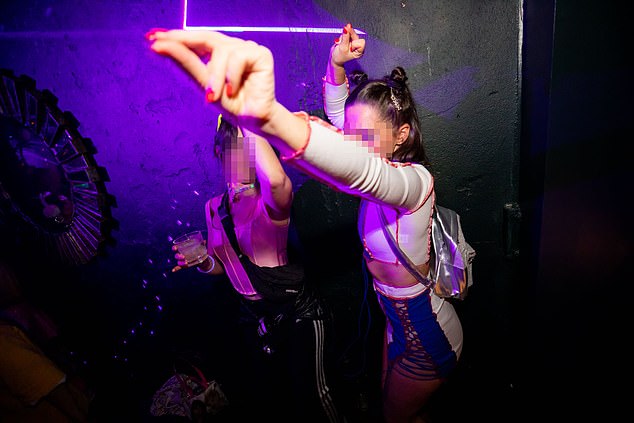 Another event Circus Bar called ‘Trapeze’ was also on the same night featuring more than 10 DJs, with hundreds of guests believed to have been in attendance

Do you blame the Andrews Government or Morrison Government for Victoria’s latest Covid outbreak and lockdown?

Pictures from Saturday May 22 and the early hours of Sunday May 23 show women dressed in fluro bikinis and playsuits dancing under a mirrored ball in a private room.

Some of the revellers at Circus Bar had been celebrating the birthday of club owner, Sean Rault.

He posted a message to his Facebook account on Wednesday telling people to get tested if they attended his party, declaring it wasn’t a ‘raver’ who brought the virus in.

‘GET TESTED. Think of everyone else. Don’t be selfish,’ he wrote to his friends.

‘It was someone from the public, not a raver who’s brought it in’.

Who and how many went home with the virus that night is not known.

Daily Mail Australia are not suggesting Rault, or any of the patrons who attended the party have Covid-19. 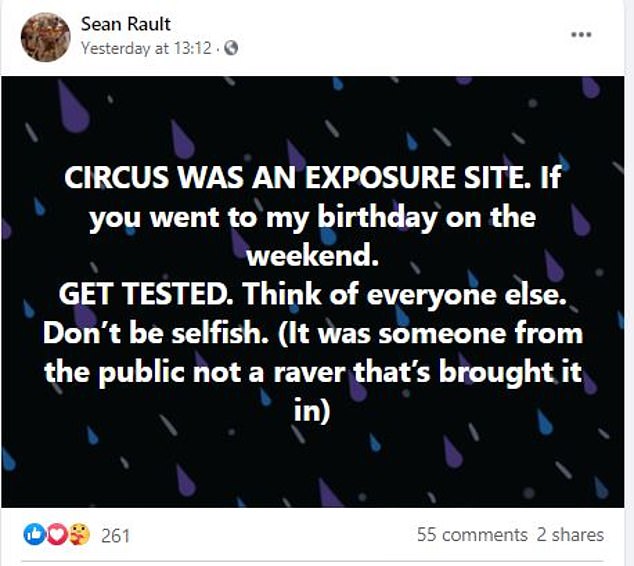 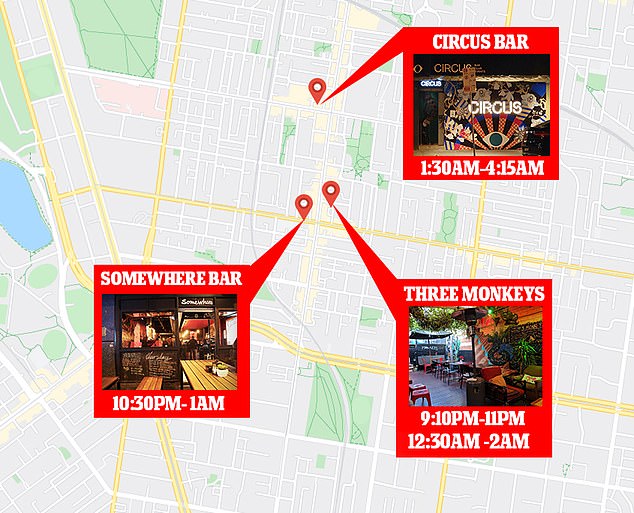 A Covid-infected case on Saturday May 22 headed out for a big night in Prahran, in Melbourne’s southeast. They attended three different bars and stayed out until Sunday 4am 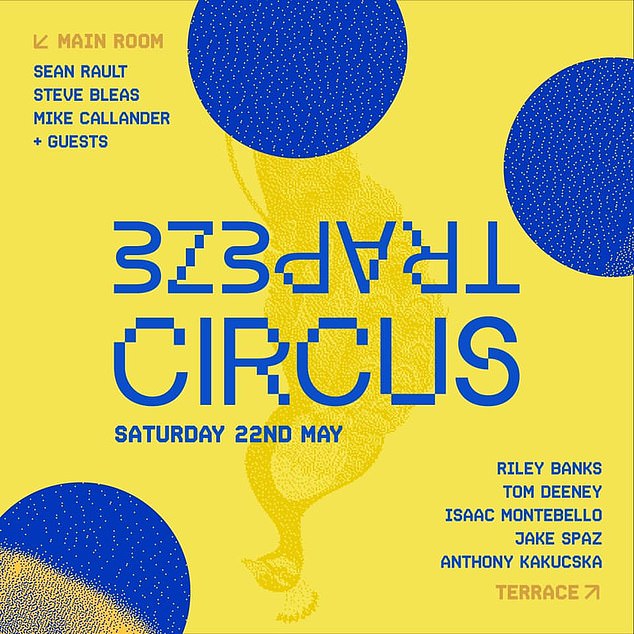 Another event at Circus Bar called ‘Trapeze’ was also on the same night featuring more than 10 DJs, with hundreds of guests believed to have been in attendance

The infected person arrived at Three Monkeys at about 9.15pm and then went down the street to the popular Somewhere Bar.

The bar was busy, as was Three Monkeys.

‘It wasn’t crazy but it was solid,’ owner Antony Harvey told The Age of the crowd.

The infected person stayed at Somewhere Bar before heading back to Three Monkeys at about 1am.

They then then headed to Circus Bar on nearby Commercial Road where they stayed until 4am.

The club was holding an event called ‘Trapeze’, featuring more than 10 DJs, with hundreds of guests believed to have been in attendance. 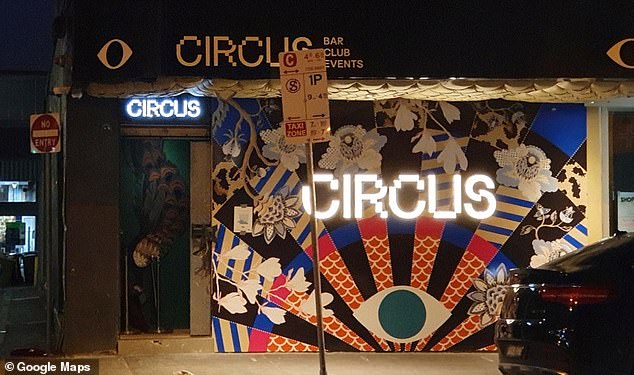 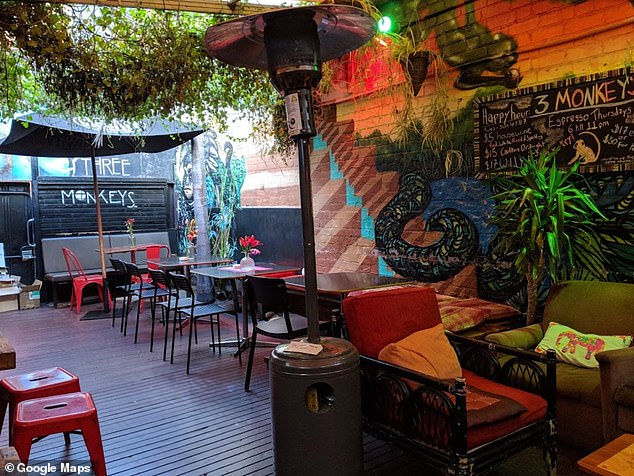 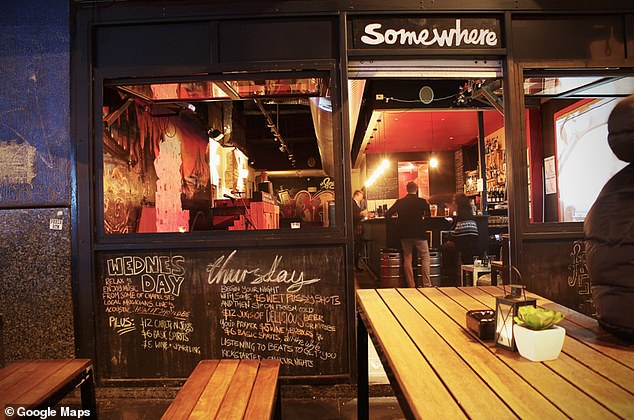 From midnight on Thursday, people will only be able to leave home to shop for food and essential items, provide or receive care, exercise and to work or study if they can’t from home, and getting vaccinated.

Chief Health Officer Brett Sutton said in excess of 10,000 primary and secondary contacts have been identified, and warned ‘any one of them’ could become cases over the next 14 days from their exposure.

‘We haven’t seen [a number that large] previously. There’s been opportunities to spread to people. It speaks to the infectiousness of this B161 variant,’ Prof Sutton said. 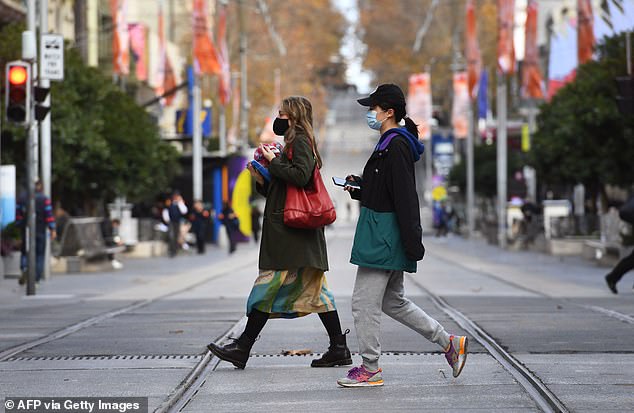 From midnight on Thursday, people will only be able to leave home to shop for food and essential items, provide or receive care, exercise and to work or study if they can’t from home, and getting vaccinated 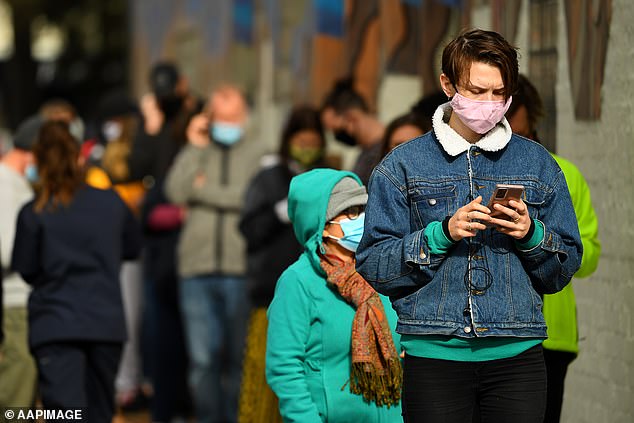 The 5km travel limit will also be reimposed for exercise and shopping, as will compulsory use of masks both indoors and outdoors 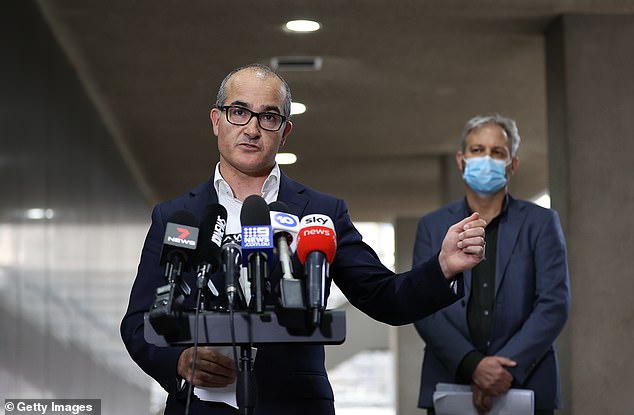 Acting Victorian Premier James Merlino said 10,000 primary or secondary contacts will need to either quarantine, or test and isolate, and warned the ‘number will continue to grow and change’

Acting Victorian Premier James Merlino said the contacts will need to either quarantine, or test and isolate, and warned the ‘number will continue to grow and change’.

‘Unless something changes, this will be increasingly uncontrollable,’ he said.

Contact tracers are continuing to hunt a ‘missing link’ in the infection chain, with the virus genomically linked to a man who caught it in Adelaide during hotel quarantine.

A report released in South Australia said the traveller likely caught the virus from an adjacent hotel room when his door and their door were momentarily opened at the same time, raising questions about the safety of the entire program.

Genomic sequencing has found the new cluster of 26 in Melbourne have the same double mutant Indian strain as the man from hotel quarantine, meaning it somehow jumped from him to infect others across the city.

Only five reasons to leave home:

No visitors to your home other than an intimate partner. Single bubbles will be permitted. If you live alone, you can make a bubble with another person.

· Restaurants, pubs, and cafes can provide takeaway only.

· Childcare and kinders will be open as per the last circuit breaker lockdown earlier this year.

· Approved professional sporting events will proceed but proceed without crowds.

· Schools will move to remote learning, except for vulnerable children, and children of authorised workers.

· Higher education will move to remote learning only.

· Community support and recreation, accommodation, but there will be some exemptions that apply.

· Hotels, clubs, TABs and the casino will be closed,

· Aged care facilities, no visitors except for limited reasons.

· In our hospitals, visitors only for end of life, to support a partner during birth, or a parent accompanying a child.

· In terms of ceremonies, funerals, a maximum of 10 people plus those running the service.

· Religious activities will not proceed other than through broadcast with a maximum of five people.