Inside the perfect Cotswolds pub: A review of The Double Red Duke, housed in a quaint Tudor building

He had quite a reputation, the duke. The story goes that a 16th Century farmer gave away much of the double red corn he grew to the villagers of Clanfield, resulting in his nickname.

Whether historic or folkloric, the duke’s memory lives on amid the tasteful flashes of red everywhere in this former farmhouse and inn, from the candy-striped parasols in the garden to his scarlet silhouette on the menu.

And it’s all rather lovely. So lovely, in fact, that it’s hard to bag one of the 19 Cotswolds-chic rooms in the latest addition to Georgie and Sam Pearman’s Country Creatures portfolio of hotels and restaurants. 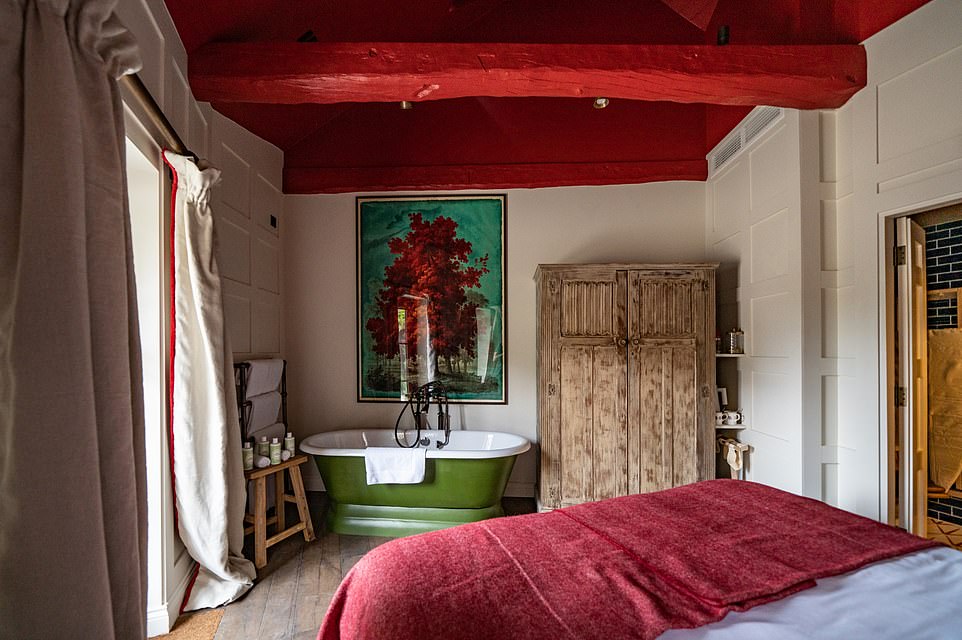 The Double Red Duke bedrooms are divided between the quaint old Tudor building and the newer addition just across the car park, Jane reveals 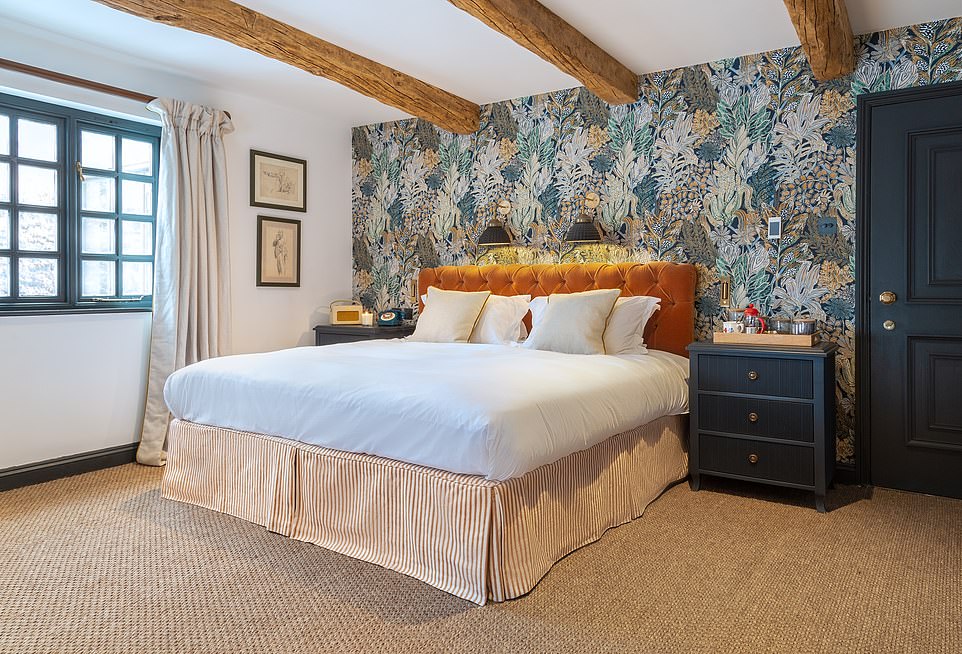 In categories ranging from cosy to family, the rooms ‘are all special’, writes Jane – ‘one with a red bathtub in a cosy nook, others opening on to the garden for dog-owners, and a duplex room with upstairs bathroom’

Interior designer Georgie has added patterned wallpaper, fabric headboards and wooden furniture to the rooms, which are divided between the quaint old Tudor building and the newer addition just across the car park.

In categories ranging from cosy to family, they are all special – one with a red bathtub in a cosy nook, others opening on to the garden for dog-owners, and a duplex room with upstairs bathroom. Our family room has twin bunks beyond a floral curtain, tasty cookies on the tea tray and a huge bathroom with a tub and twin walk-in showers.

It’s a perfect pub, with a shepherd’s hut spa in the garden and the joys of the Cotswolds just outside. 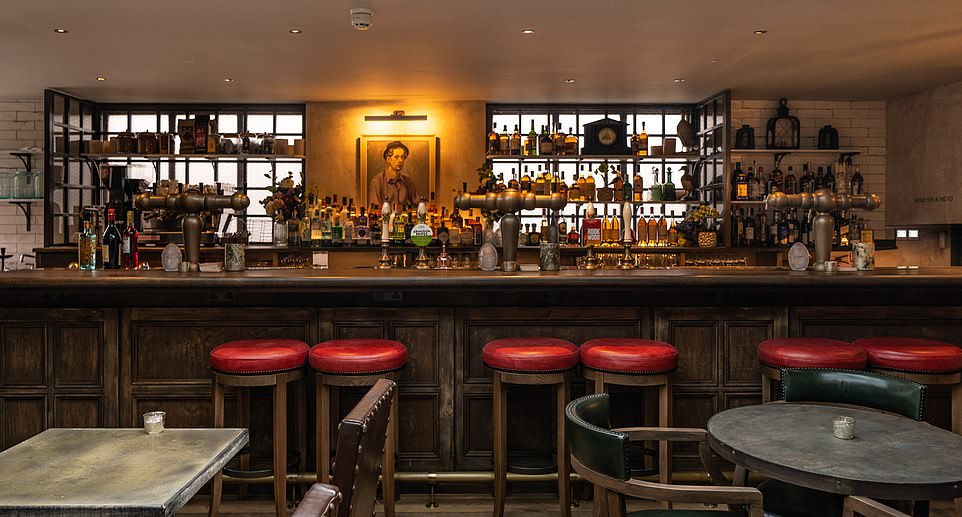 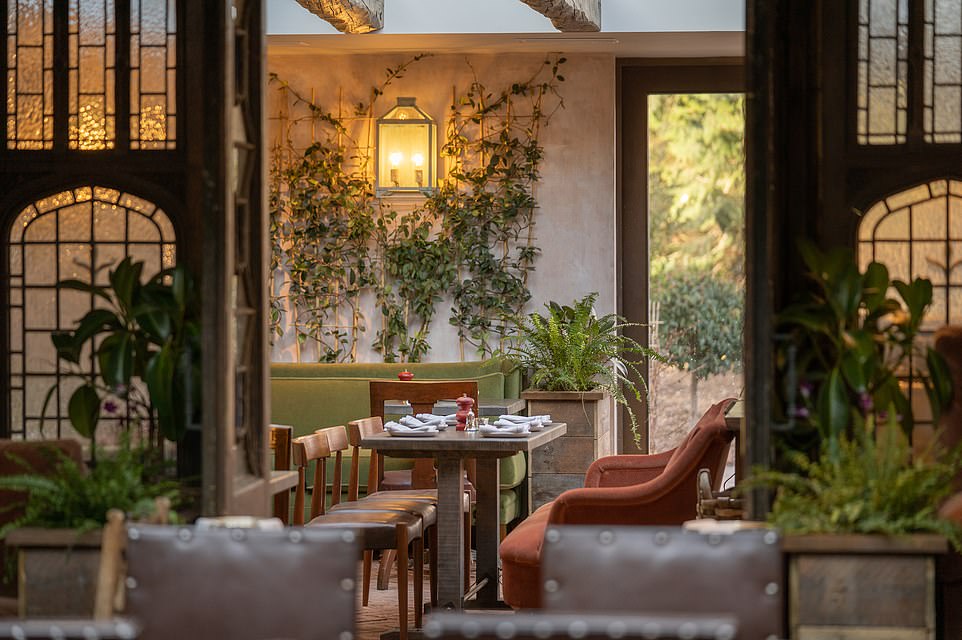 Jane writes: ‘The car park is overflowing when we arrive just after lunch and walk into a world we don’t want to leave’ 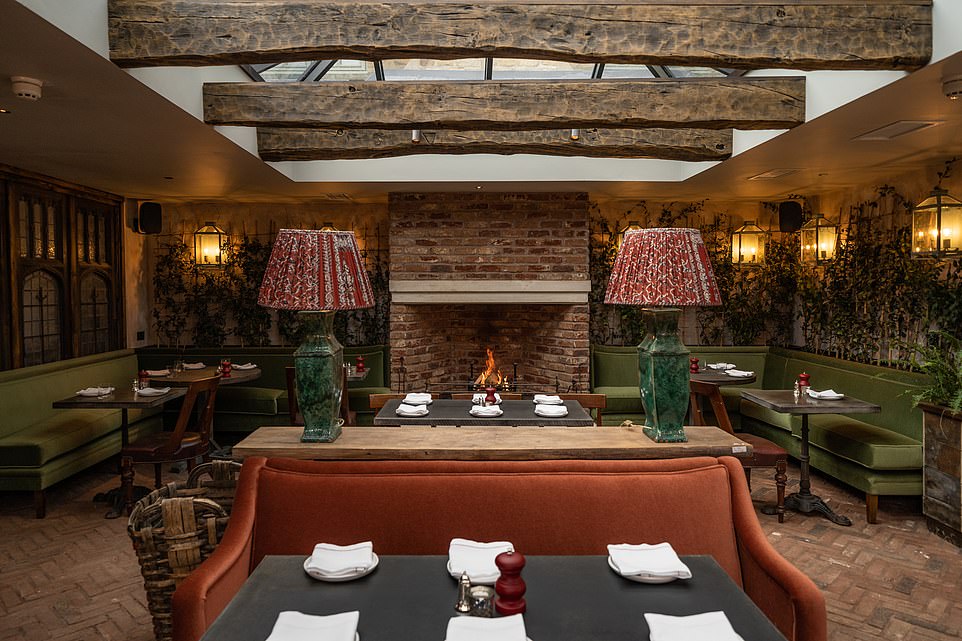 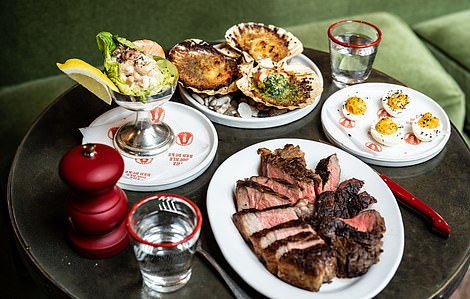 The star of the Double Red Duke menu is the flame-grilled meat and fish, Jane concludes

The car park is overflowing when we arrive just after lunch and walk into a world we don’t want to leave.

On one side of the flagstone corridor, a series of snugs beckon to anyone wanting to curl up with the paper by the fire or sink into a sofa to sample one of the tasty cocktails on offer (we do both). On the other is the pub proper, dimly lit with plush banquettes and low ceilings.

A lighter bar has been built at the back, with bright red bar seats, wooden floors and beams beneath a glass roof that leads on to a garden room with open fire.

Normal pub grub features on the menu, but the star of the show is the flame-grilled meat and fish. Beware: it’s easy to rack up a large food bill here, and a cooked breakfast costs extra. That said, the continental spread on the kitchen counter is decent, including overnight oats, yogurt and sourdough.

You can eat in any of these convivial spots, but my son and I prefer the counter in the open kitchen, where we watch our dinner sizzle over charcoal, cherry and apple wood. 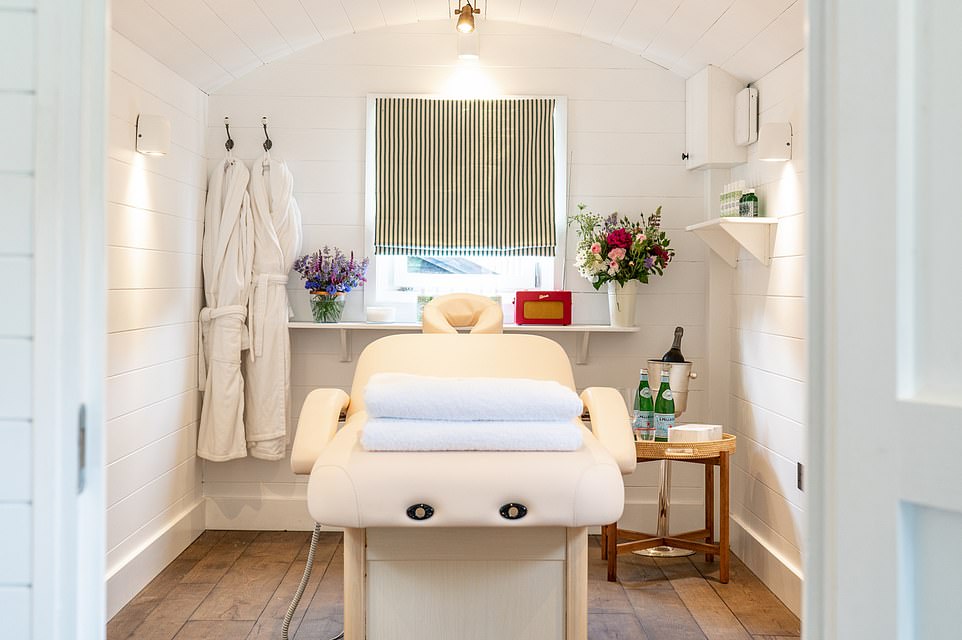 And relax: The shepherd’s hut spa in the garden of The Double Red Duke 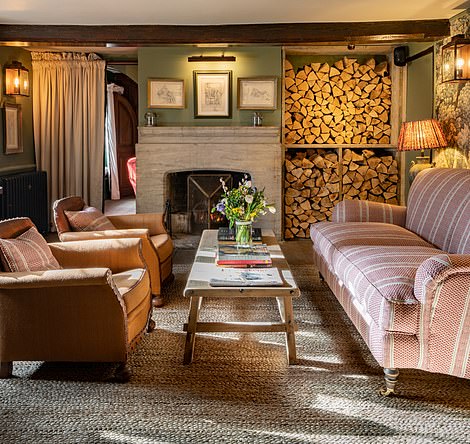 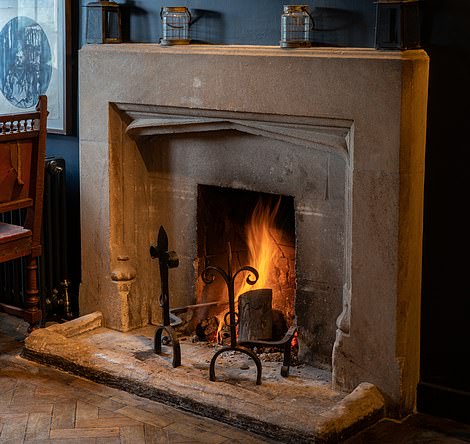 The pub’s name comes from a 16th century Clanfield farmer who gave away much of the double red corn he grew to the villagers. Rooms cost from £120 per night

Food critics can’t get enough of this fodder, and you can see why, although the starter of wood-roasted scallops turns out to be a disappointment. My son declares his porterhouse, recommended for two, the ‘best steak ever’ and goes on to plough his way through sticky toffee pudding.

My perfectly cooked turbot is complemented by deliciously tasty BBQ hispi cabbage and miso butter as well as purple sprouting broccoli and vinaigrette.

It is so good that the next day, after a two-hour yomp down to the Thames Path and a fireside game of Scrabble, we start wondering about the Sunday roasts we saw being prepared in the kitchen.

Too late – yet again, there’s no more room at the inn.