Inspiring cancer survivor with cerebral palsy, 29, became a CrossFit trainer and opened her own gym

When Steph Hammerman was born, doctors diagnosed her with cerebral palsy.

Her parents were told that the common motor disability meant their daughter would never walk, talk, read or write.

Instead Hammerman, from Knightdale, North Carolina, went on to become a certified CrossFit trainer and, despite developing cancer of the immune system, also managed to open her own gym.

She was even asked by Nike to become one of their sponsored athletes last year.

The 29-year-old told DailyMail.com that she hopes to inspire others in a similar situation and change what it means to be an elite athlete. 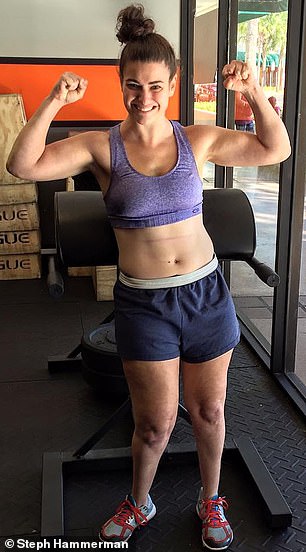 Steph Hammerman, 29 (left and right), from Knightdale, North Carolina, was diagnosed with cerebral palsy at birth. Her parents were told that she would would likely never walk, talk, read or write 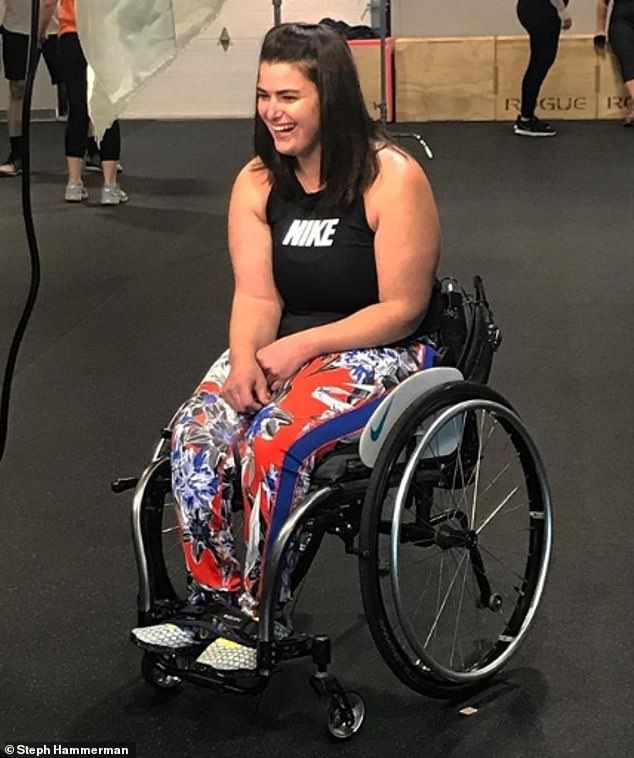 Hammerman (pictured) currently gets around in a wheelchair and with crutches, and became certified in CrossFit in 2014

Hammerman, who has a twin that doesn’t have cerebral palsy, was born prematurely. Her brother weighed three pounds and five ounces, and she weighed just one pound and 15 ounces.

‘I lost a lot of oxygen and blood to my brain, so doctors were not sure what my future was going to hold,’ she told DailyMail.com.

As an infant, she was diagnosed with cerebral palsy, which is the common motor disability in childhood, according to the Centers for Disease Control and Prevention.

It occurs from a brain injury sustained during fetal development or birth, and about 8,000 babies are diagnosed every year.

Hammerman currently uses both crutches and a wheelchair to get around, which she says have helped her retain a lot of independence.

She said she began doing CrossFit – a popular strength and conditioning program – in 2012.

‘I was a competitive cyclist for two years and, one day, this woman invited me to her gym,’ she said.

‘I just fell in love with [CrossFit]. I loved being able to feel like you accomplished something.’

Soon enough, Hammerman became the only CrossFit Level 2 (out of 4) Coach with cerebral palsy.

Because she was so active, her next health battle came as a shock.

Hammerman said she was on a date with her boyfriend Tyler in April 2016 when she sat up in her wheelchair and screamed in pain. 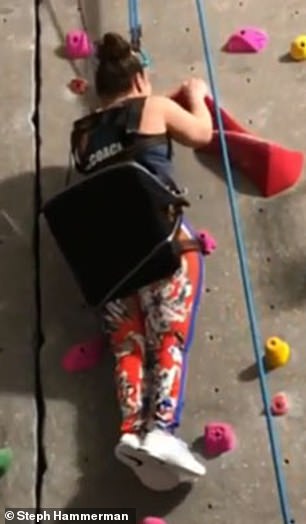 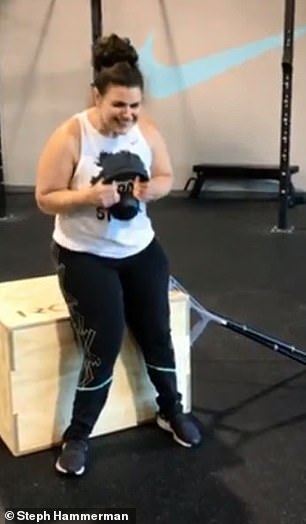 In April 2016, her arm began hurting on a date and her boyfriend urged her to go to the doctor. One month later, she was diagnosed with stage 3B Hodgkin’s lymphoma. Pictured, left and right: Hammerman in training 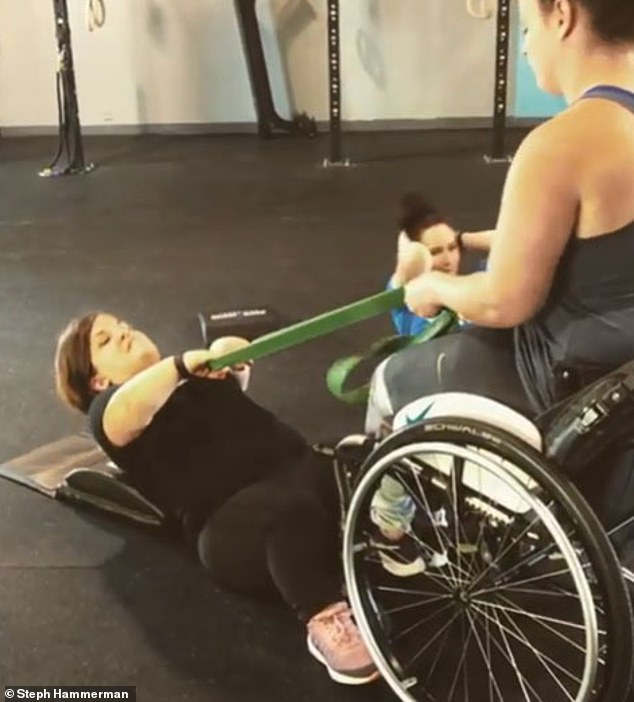 Hammerman immediately began a 29-week chemotherapy regimen and she credits her fitness regimen with saving her life. After seven weeks, she was cancer-free. Pictured: Hammerman training a client

‘My arm hurt so bad, I thought I hurt myself during a workout I had done that day,’ she said.

After several doctors’ visits in New York, where Hammerman’s family is from, she was diagnosed in May with stage 3B Hodgkin’s lymphoma.

Hodgkin’s lymphoma is a cancer of the part of the immune system known as the lymphatic system.

The disease occurs when cells in the lymphatic system grow abnormally and may spread beyond it, according to the Mayo Clinic.

Symptoms include fever, fatigue, night sweats, weight loss and swelling of lymph nodes in the neck, armpits or groin.

The American Cancer Society estimates that about 8,100 new cases will be diagnosed in 2019 and about 1,000 people will die.

The five-year relative survival rate is 87 percent, meaning the cancer can be treated successfully even in advanced stages.

Hammerman immediately began a 29-week chemotherapy regimen and she credits her fitness lifestyle with saving her life.

‘I did chemotherapy, but it’s nothing like you see on TV,’ she said.

‘I never got sick, never felt tired. And I was cancer-free after seven weeks. The doctor said she’d never seen anything like it, but we continued with the rest of treatment as a precautionary measure.’ 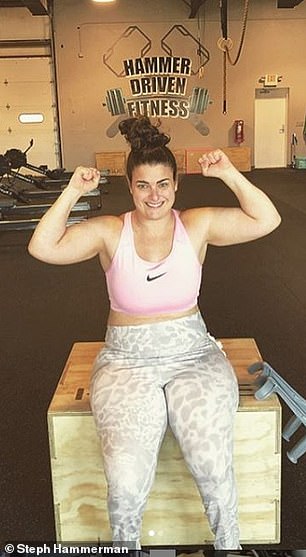 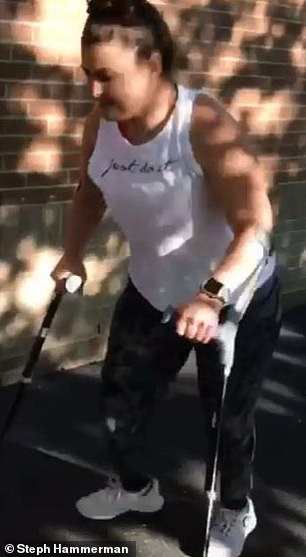 In November 2016, she was declared to be in remission and she and her boyfriend moved to North Carolina. Hammerman (left and right) opened her own gym, Hammer Driven Fitness, in September 2018 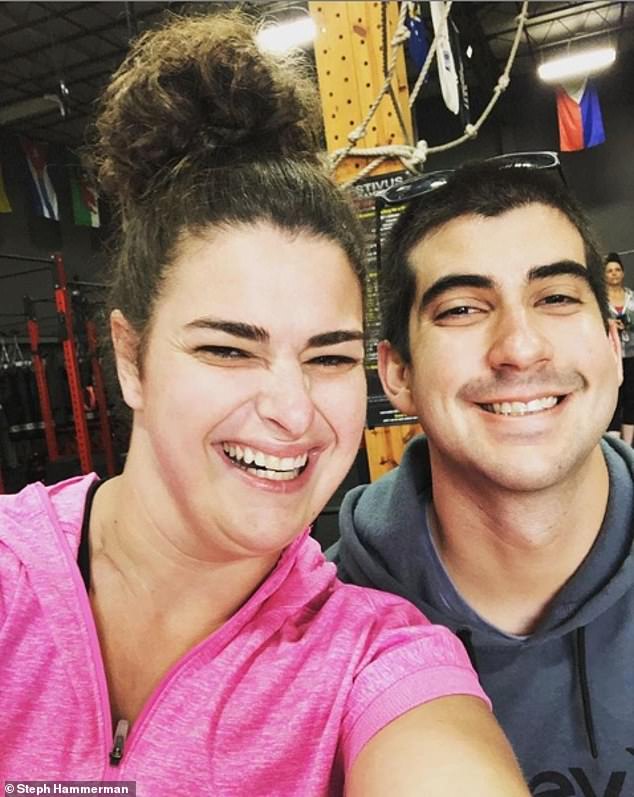 In November 2016, Hammerman was officially declared to be in remission and, two weeks later, she and her boyfriend moved to North Carolina.

It was there that she began seriously considering opening a gym.

‘I had wanted to open a gym for a while but it wasn’t until we moved to North Carolina that things all fell into place,’ she said.

Hammerman and Tyler found a space for rent across the street from their house, began preparing the gym with equipment and new staff in July 2018.

So far the gym has 50 members, and is continuing to grow, with clients’ ages ranging from six to 69.

‘I really wanted to create a space where no matter what age, ability or skill level you had, you feel like an athlete,’ she said.

‘It was an amazing feeling. Who gets to say they’re an elite athlete for an elite company?’ she said

‘Now I can open doors for other people and get to change what it means to be an elite athlete.’

Hammerman says she hopes she can inspire others and show that having a disability doesn’t mean they need to lead a dull life.

‘If you have something you’re truly passionate about, find it and do it,’ she said.