‘Stop overpaying for contact lenses. Get 30 contacts delivered to your door for ONLY $1’ reads the offer for subscription contact lenses made by start-up company Hubble.

But several customers say wearing the lenses have left them in excruciating pain, inflamed and they have even developed ulcers, – and The New York Times reports that Hubble has used a loophole from the Federal Trade Commission to avoid regulation and bypass doctors.

Ophthalmologists and optometrists say they’ve seen several patients with eye problems after using Hubble and have criticized the company for switching people from their prescribed lenses to a completely different brand.

This is not the first time this has happened. Quartz also reported that the company sold lenses to customers with fake prescriptions and fake doctors’ names. 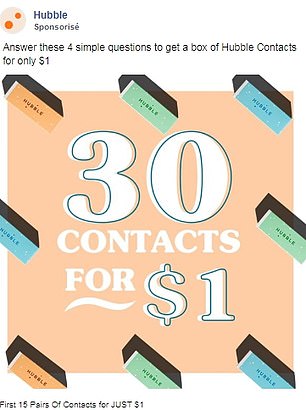 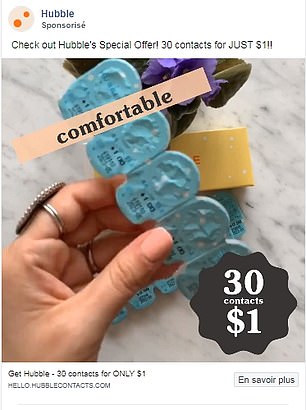 But customers have reported suffering from eye pain, inflammation and ulcers after wearing the lenses. They’re often not the same lenses prescribed by patients’ eye doctors. Pictured, left and right: Ads for Hubble contact lenses

Hubble was founded in 2016 and has managed to raise more than $70million thanks to donations from huge companies such as Colgate-Palmolive, according to The Times.

Founders Ben Cogan and Jesse Horwitz reportedly got the idea for the company after Cogan’s lens prices increased in 2015.

‘We started Hubble, so you don’t have to choose between your health and your wallet,’ a statement on the website reads.

‘Our contacts are barely a dollar a day, so you can finally afford to wear fresh lenses as much as you like.’

Around 45 million people in the US wear contact lenses, according to the Centers for Disease Control and Prevention.

Depending on the whether the contacts are daily disposable or okay to reuse, the brand and your insurance, lenses can cost anywhere from $175 to $1,500 a a year.

Usually eye doctors fit and then prescribe contact lenses to their patients. 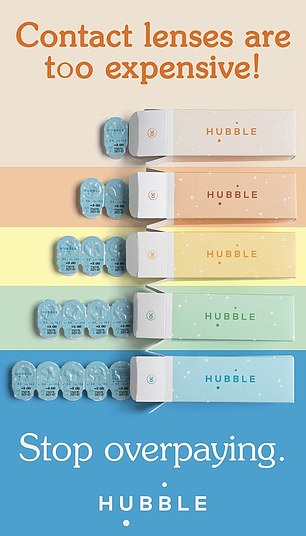 The lenses are made from a material that is hardly used anymore, which was found to reduce the flow of oxygen to the cornea. Pictured: Hubble contact lenses

Hubble also requires that buyers enter their prescriptions int he order form, which they then verify with ophthalmologists or optometrists.

But several users have complained of being left in debilitating pain after using the lenses.

Ashley McCormick, of Hackensack, Minnesota, told The Times that one morning in January 2019, she woke up, barely able to open one of her eyes.

She was diagnosed with uveitis, which occurs when the middle layer of tissue in the eye wall become inflamed.

And Bailey Brown, from Dallas, Texas, developed a corneal ulcer in one of her eyes just lat month.

She told The Times that when she told her ophthalmologist she was using Hubble contact lenses: ‘They said, ‘Oh, that’s it. You’re not the first’.

Dr  Lauren Lodholz, an optometrist from Lexington, Kentucky, says more than half of her patients have reported problems after wearing Hubble lenses.

‘They’re just assuming the lenses they get from Hubble are the same thing I prescribe them,’ Dr Lodholz told the newspaper. ‘They see it’s a great price and see the bottom line.’

Dr Claudia Lee, an optometrist from Whitby, Ontario, Canada, wrote a blog post about Hubble, in which she said: ‘Contact lenses are MEDICAL DEVICES.

‘They are not one-size-fits-all, and what works best for you might not work for someone else.’

One problem may be that the material Hubble used to make its lenses – Methafilcon A – is rarely used anymore because it only comes in one shape and size.

Several studies found that lens wearers were suffering from corneal hypoxia, meaning there was decreased oxygen flowing to the cornea. 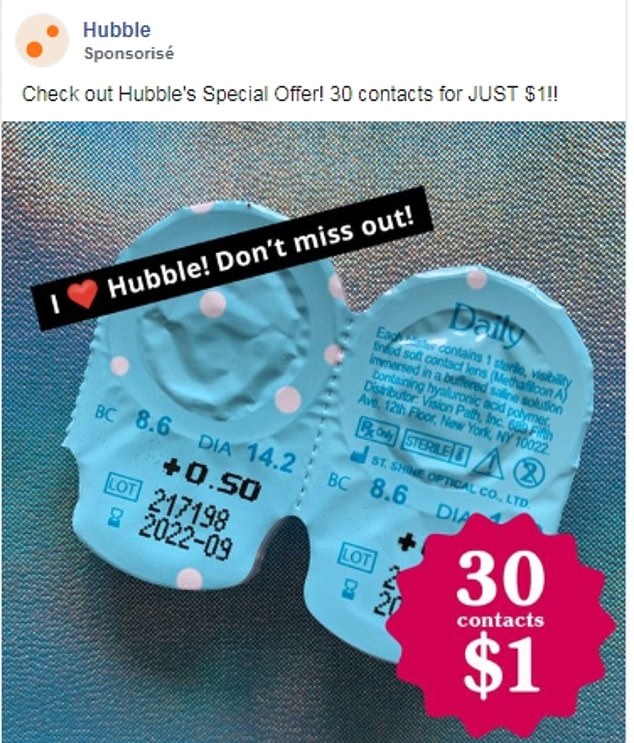 Hubble has used a loophole that lets sellers send prescriptions to patients if they haven’t heard back from the doctor within eight hours. Pictured: Ads for Hubble contact lenses

The ideal Dk/t – the method used to measure how much oxygen contact lens wearers are receiving – is 24. But the Dk/t of Hubble contacts is only 18, according to Dr Lee.

‘Research shows that a Dk/t of 24 is necessary to maintain cornea integrity and avoid swelling,’ she writes.

Additionally, as it turns out the company has used a loophole from the Federal Trade Commission (FTC) to avoid regulation.

The FTC allows something called ‘passive verification’, in which sellers send prescriptions to eye doctors and – if they haven’t heard back in eight hours – they can sell their product.

Additionally, Hubble was found to have sold contact lenses to people who entered fake prescriptions and nonexistent eye doctors into the order forms, reported Quartz.

The company said in a statement that it denies allegations that it cuts corners to verify prescriptions or has engaged in manipulative marketing.

‘The suggestion that Hubble is engaging in impermissible contact lens substitution is simply not based on the facts or the law, and does not reflect our business practices or the standards by which we operate,’ Hubble told The Times.

Hubble did not immediately reply to DailyMail.com’s request for comment