Aussie Instagram start-up once valued at $1.78 BILLION is forced to axe almost 20% of its staff as its CEO admits: ‘I was wrong’

One of Australia’s most successful start-ups will give employees it was forced to fire 11 weeks pay, mental health care and free computers – as it downsizes in an attempt to survive amid surging cost of living pressures.

Linktree CEO Alex Zaccaria announced the dramatic staff cuts in an emotional post to the company’s blog on Tuesday morning.

The company, which has about 300 employees, is expected to axe 50, with its HR , design and marketing and talent acquisition teams the worst affected.

The cuts are across the company’s Sydney and Los Angeles offices.

Linktree is one of the 300 most popular websites in the world with 1.2 billion monthly views. Celebrity subscribers such as Selena Gomez use the service to manage their social media and businesses.

However, all ex-employees will be offered incredibly generous leave packages including 11 weeks of pay, just under three months of health insurance, mental health support and free Apple laptops.

‘All Linktree Macbooks will be gifted alongside all purchased work from home equipment regardless of tenure with the company,’ Mr Zaccaria wrote.

When commenting on the company’s growth in 2021, Mr Zaccaria said: ‘I assumed the favourable economic environment would persist into 2022.’

‘Instead, conditions changed faster than expected, and those assumptions I made were wrong.’

He said the company’s ‘next phase’ required ‘narrowing our focus on our long term strategy by reducing roles that are no longer aligned with our roadmap’.

Linktree credits itself on being a progressive company with a big focus on social relationships.

Mr Zaccaria said the company would host weekly meetings for the next four weeks where employees could ask about the downsizing as well as offering mental health days.

‘Friday will be a company-wide mental health day at Linktree,’ he said. 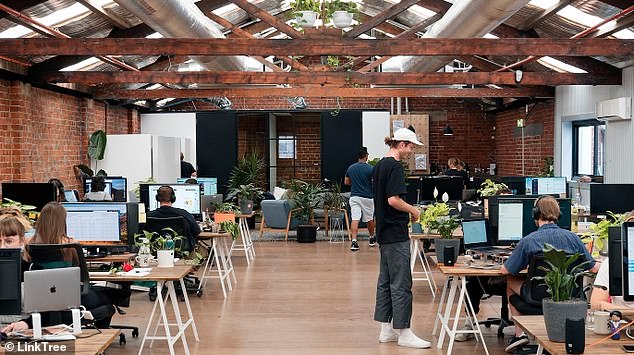 Employees let go during the mass reduction will be offered incredible support including 11 weeks of pay, physical and mental health care and free computers

‘For a company like ours, so focused on culture and comradery, this will be difficult news. I don’t expect anyone to be their normal selves.

‘We will also be allocating you an additional mental health day that you can take at a time that suits you.’

All dismissed staff will also be given outplacement support as well as advertisement of availability by Mr Zaccaria on LinkedIn.