By Emily Kent Smith for the Daily Mail

Instagram may get rid of the number of ‘likes’ on posts as part of an attempt to make the site ‘less pressurised’, it was announced last night.

The picture sharing platform, popular among teenagers and young adults, has been accused of fuelling cyber-bullying and allowing communities which glorify self-harm and eating disorders to flourish.

Yesterday the company, owned by Facebook, announced it was trialling a scheme in Canada which will see the number of likes under each image hidden.

On Instagram, users post pictures and people can show their approval by pressing a heart icon with the total number of ‘likes’ totted up. At the web giant’s annual F8 conference, in San Jose, California, Instagram chief Adam Mosseri said: ‘We want to make it a less pressurised environment.

‘We want people to worry a little bit less about how many likes they are getting on Instagram and spend a bit more time interacting with the people that they care about.’

The move would be a major upheaval for the social media platform which has become known for turning its users into ‘influencers’ thanks to the huge number of followers they can attract.

Mr Mosseri said although users would be able to see who had liked their post, the total number of interactions would not be shown.

He stressed: ‘What we aspire to do – and this will take years – is to lead the fight against online bullying.’ The move comes after politicians rounded on the network following the suicide of British teenager Molly Russell, 14. 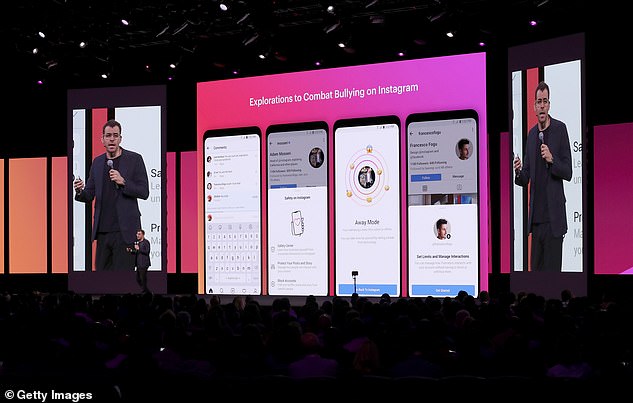 Mr Mosseri yesterday pledged to clean up the platform and announced it would trial features such as ‘nudging’ users when they posted comments which could be deemed offensive.

It is also testing an ‘away mode’, which gives users the opportunity to block themselves temporarily from the site at stressful times.

Meanwhile Facebook boss Mark Zuckerberg told the conference the site’s new focus would be on privacy. He insisted: ‘I believe the future is private.’