Instagram model and mother is jailed over crime spree on Sydney’s northern beaches after breaking into cafes, stealing cash and buying McDonald’s with a stolen credit card

A glamorous Instagram model has been jailed for robbing a string of cafés and convenience stores in Sydney’s northern beaches.

Monique Marina Agostino, 24, was convicted of a multiple charges stemming from a crime spree in which she helped to rob four shops in under an hour in November last year.

The former northern beaches schoolgirl was also sentenced on a second spate of charges for crimes committed at Blacktown Westfield Shopping Centre in May this year.

Monique Marina Agostino, 24, has been sentenced to 24 months in prison for her role in a spate of burglaries, which included breaking in to four premises in less than one hour

Those charges were for offences including possessing three diazepam tablets – a restricted benzodiazepine once known as Valium, possessing the prohibited drug ice,  possessing a knife in Target, and stealing a $90 jacket from budget clothing retailer Supré.

The aspiring actress and model represented herself before the Downing Centre Local Court after her former barrister, Bronwyn Pullinger withdrew from the case.

Magistrate Jacqueline Milledge sentenced Agostino tto jail time on Thursday for more than 10 separate charges, with the sentences to be served concurrently.

The longest term she received was 24 months in prison, with a non-parole period of 18 months.

The former Killarney Heights High student will be eligible for parole on 4 June, 2021, court records show. 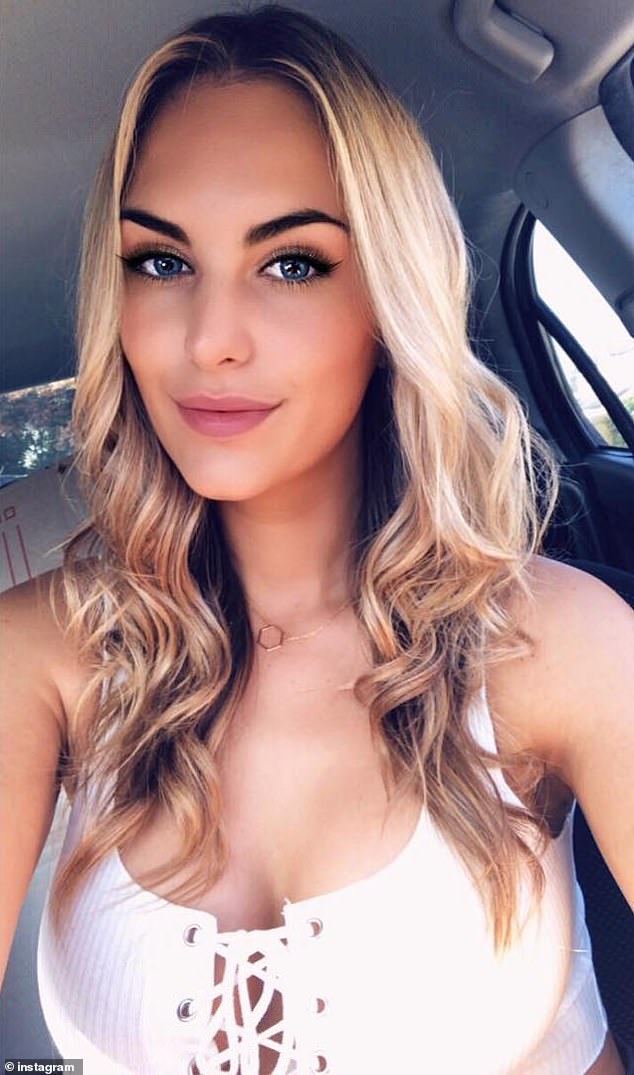 The stunning 180cm-tall single mother who once worked for a Manly real estate agency has already been in custody for several months, the Daily Telegraph reported.

She also received jail terms of two months apiece for a series of bail offences for failing to appear in court.

She will appeal the severity of her sentences in the District Court in January.

The court previously heard how Agostino drove a number of teenage boys wearing black masks to the shops where they jemmied open the doors using a chisel.

While Police prosecutor John Sharpin told the court Agostino did not break into the premises herself but was nearby in her car and knew the accused people.

The whirlwind crime spree erupted in the early hours of November 6 last year when security camera footage shows a person trying to break in to a business, dressed in black with their face covered.

Three premises were broken into within six minutes.

At 1.52am, the Pound and Pizza restaurant in Tramore Place, Killarney Heights was broken into and a Samsung Galaxy mobile phone allegedly stolen.

Two minutes later, they tried to break in to the House of Fruit convenience store.

Two minutes after that, they hit the nearby Le Parisien Café.

They then drove 15km to the upper north shore suburb of St Ives where they broke into the Stanley Street Café at 2.48am, less than an hour after their first attack.

A credit card and $300 were allegedly stolen from the Stanley Street Cafe and Ms Agostino used the card to buy $11.55 worth of McDonald’s in Brookvale.

Less than three weeks later, Agostino was again involved in a burglary, breaking in to the Forestville Bakery where $1000 was allegedly stolen.