Instagram is testing out a new way to take the pressure off scrolling through your feed.

The social media platform announced at Facebook’s annual F8 developer conference that it’s hiding ‘Like’ counts on photos for users in Canada as part of a limited test.

As part of the change, users won’t be able to see like counts on a photo, or video views on a post.

The company said it wants its users to stop focusing on measures of popularity such as like counts and followers and more on the photos and videos being shared.

The social media platform announced at Facebook’s annual F8 developer conference that it’s hiding ‘Like’ counts on photos for users in Canada as part of a limited test.

WHAT IS INSTAGRAM’S NEW CAMERA?

Instagram is launching a new camera that will make it easier to post without the need for a photo or video.

Users will soon be able to open the camera into ‘Create Mode,’ where they can select fun effects, stickers and text, then upload that to their Stories.

‘This new camera will make it simpler to use popular creative tools like effects and interactive stickers, so you can express yourself more freely,’ the firm said.

The new camera will roll out in the coming weeks.

It’s unclear if the company will roll it out more broadly, but it’s clear that Instagram is looking into ways of reducing some of the addictive behaviors associated with the app.

‘We want people to worry a little bit less about how many likes they’re getting on Instagram and spend a bit more time connecting with the people that they care about,’ Instagram head Adam Mosseri said on stage.

Test users in Canada will be served a notice at the top of their feed saying there will be a ‘change of how you see Likes.’

Previously, eagle-eyed app developer Jane Manchun Wong had spotted the update, noticing that instead of a like count, the post would state if people you follow liked the post, but not a total number.

Among the other features launched at F8 include a revamped Instagram camera that makes it easier for users to share updates without a photo or video.

Called Create Mode, users can open the camera to share creative posts with Q&As, text and other fun effects.

The new camera will roll out to users in the coming weeks, according to Instagram. 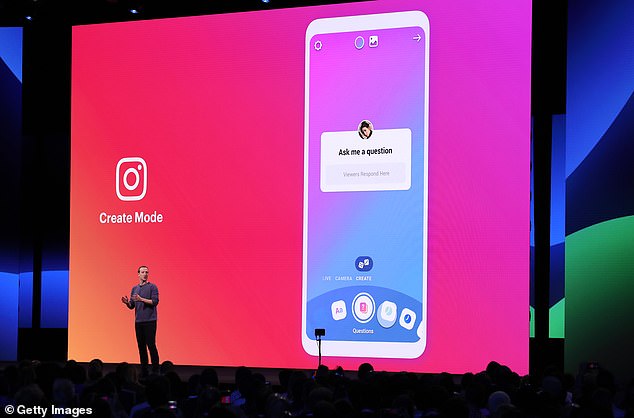 CEO Mark Zuckerberg debuted ‘Create Mode’ at Facebook’s annual developer conference, which is a new feature that lets users post text updates to Instagram without a photo or video 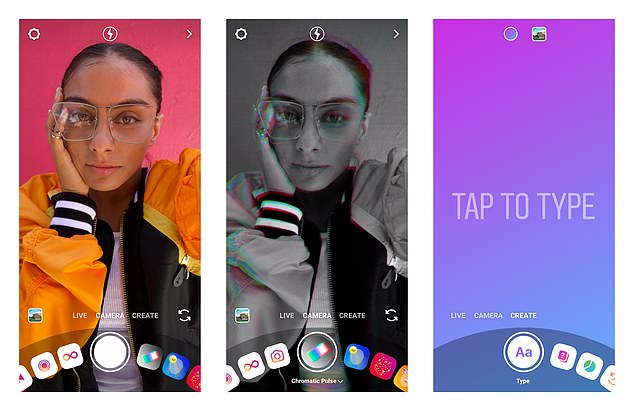 Called Create Mode, users can open the camera to share creative posts with Q&As, text and other fun effects. The new camera will roll out to users in the coming weeks

Users can raise money for a nonprofit or cause they care about by posting an interactive sticker to their Stories post.

Donation stickers are available in the U.S. now and will launch for more regions soon.

Instagram is also debuting ‘Shopping from Creators,’ which lets influencers tag products in their photos, so that users can purchase them straight from the app.

Shopping from Creators is expected to roll out soon, with limited tests being held now.

‘Instead of taking a screenshot or asking for product details in comments or Direct, you can simply tap to see exactly what your favorite creators are wearing and buy it on the spot,’ the firm said.

‘Anyone in our global community will be able to shop from creators.’

Instagram is also working on tools to prevent bullying on its platform, which is something it has consistently received feedback on, Mosseri said.

‘Sometimes bad things happen on Instagram, we know that,’ he said on stage.

‘One of the issues we hear about time and time again is bullying…So what we aspire to do is to lead the fight against online bullying.’ 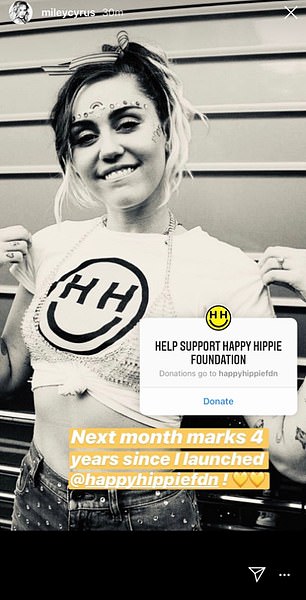 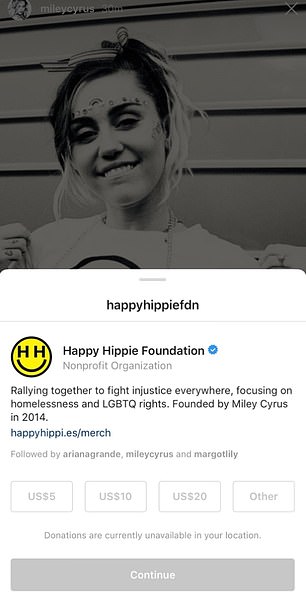 Users can now raise money for a nonprofit or cause they care about by posting an interactive sticker to their Stories post. Pictured is Miley Cyrus testing out the feature on Stories 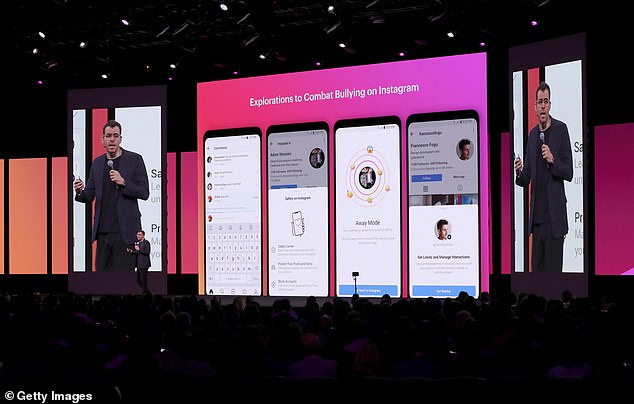 Mosseri laid out some tools that Instagram is experimenting with to stave off bullying behaviors on the app.

Among the features being tested are a ‘nudge’ tool that will urge users to rethink their comment if it includes something hurtful or aggressive.

Another tool, called ‘Away Mode,’ will encourage users to opt out of using Instagram when they’re going through a ‘sensitive moment,’ like moving to a new school.

It allows them to take a break from the constant barrage of aspirational content and notifications on Instagram while going through a tough time.

Mosseri also mentioned a tool called ‘Manage Interactions,’ that will give users greater controls over how their followers interact with them on the app.

For example, users would be able to prevent someone from receiving DMs from a user, while still allowing them to view photos they post.

These features may roll out soon, or they may never make it into the app, Mosseri said.

The Instagram updates were announced alongside a bevy of other updates from Facebook, including a complete redesign of the main Facebook  and Messenger apps, as well as new privacy-focused features like encryption and interoperability.

Facebook is making it easier than ever to find your next true love.

The company is launching its long-awaited Facebook Dating app, first teased last year, for users in the U.S. before the end of the year, after launching it in 19 countries so far.

As part of the move, Facebook is debuting a feature called ‘Secret Crush,’ which lets users match with any friends they may have their eye on.

Users can choose up to nine friends they’re interested in dating.

If a friend has opted into Facebook Dating, they’ll then get a notification saying they’ve been selected as a ‘Secret Crush.’

‘People have told us that they believe there is an opportunity to explore potential romantic relationships within their own extended circle of friends,’ the company said.

‘So now, if you choose to use Secret Crush, you can select up to nine of your Facebook friends who you want to express interest in.’

Should your crush select you as a crush as well, you’ll get a notification saying you’ve matched – not unlike the way Tinder or Bumble works.

If the person you choose as a Secret Crush never returns the favor, the person will never get notified they’ve been selected.