This high-flying photographer is creating a stir on Instagram. And no wonder. Hugo Healy , 26, from Brighton but currently based in Dubai , has garnered more than 22,000 followers on the photo-sharing platform thanks to his breathtaking drone photography. His images give you a bird’s eye view of some of the world’s most beautiful places, his shots capturing everything from an ancient castle in Scotland to the bright lights of Brighton Pier and from the domed cathedral in Florence at sunrise to some of Saudi Arabia ‘s most otherworldly landscapes. Swoop down to take a flight around the planet, thanks to Healy’s magical photography skills… 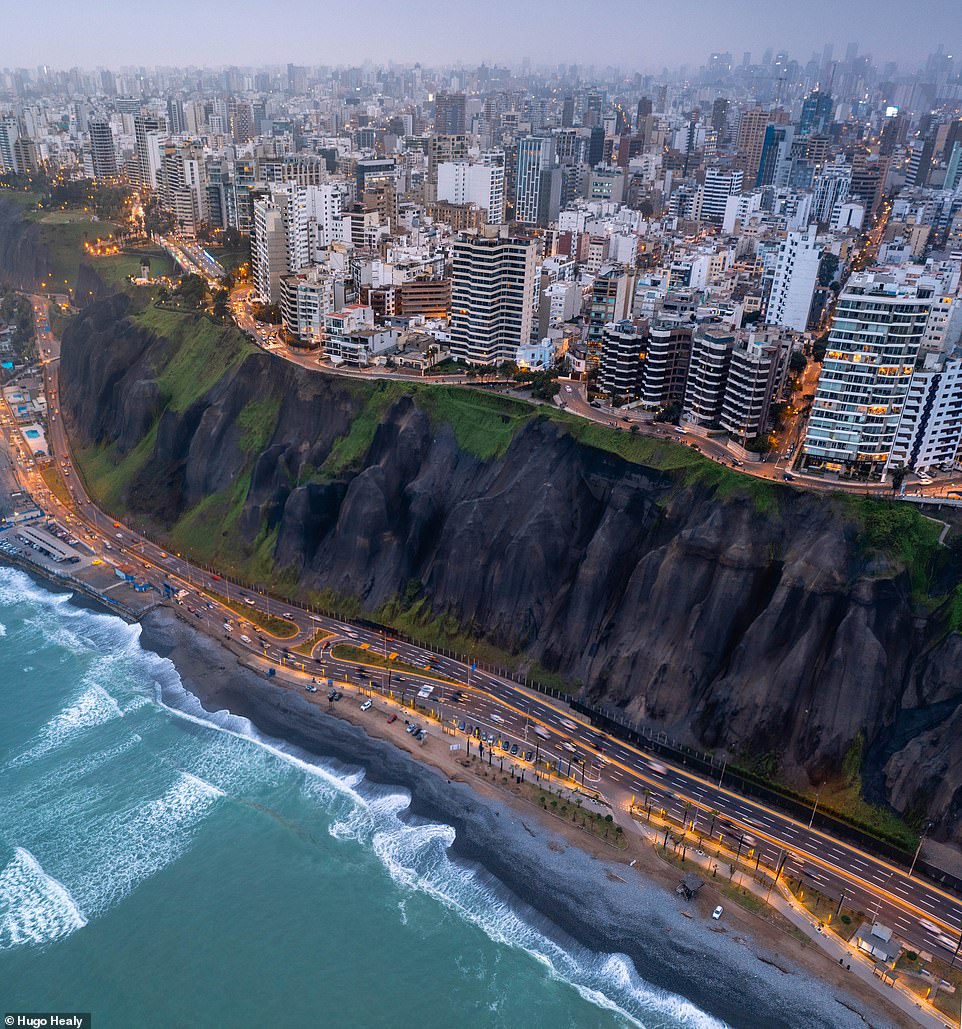 Describing this shot, which was taken over Lima, the Pacific Ocean-facing capital of Peru, Healy says: ‘Living life on the edge… the residents living on the cliffs of Lima seem to be. I think it’s important to live a life of taking risks, pushing yourself outside your comfort zone. That’s where we grow and learn so much more. Do the things you don’t want to do, things that make you scared. Activities that make you feel or your heart race. Become alive. I wonder how these guys feel living on the side of a crumbling cliff’. 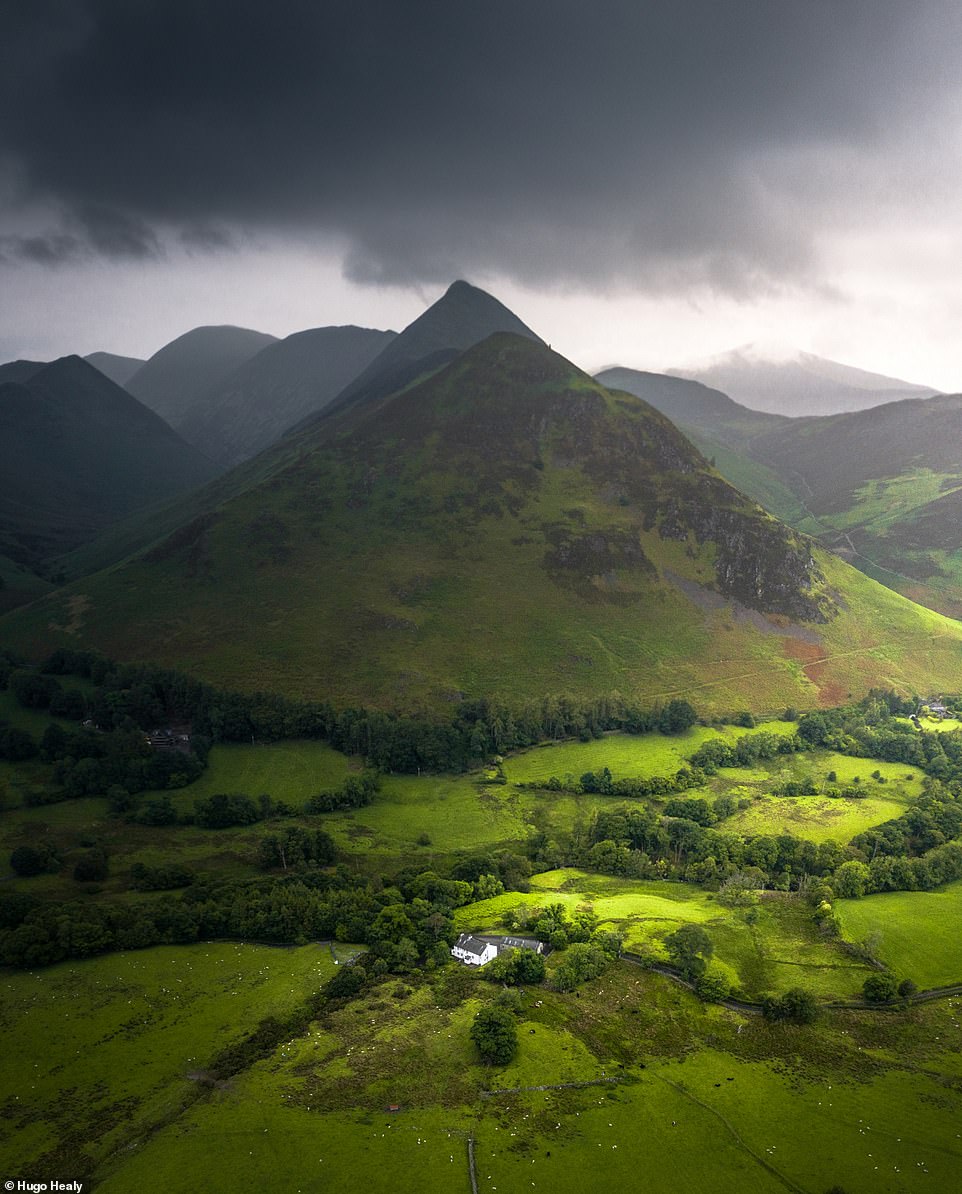 This mesmerizing shot was taken over the Newlands Valley in the Lake District, Cumbria. Healy describes the Lakes as ‘the most beautiful place in England’ and muses: ‘I mean look at the house down there… could you imagine living there and having this as your back garden?’ 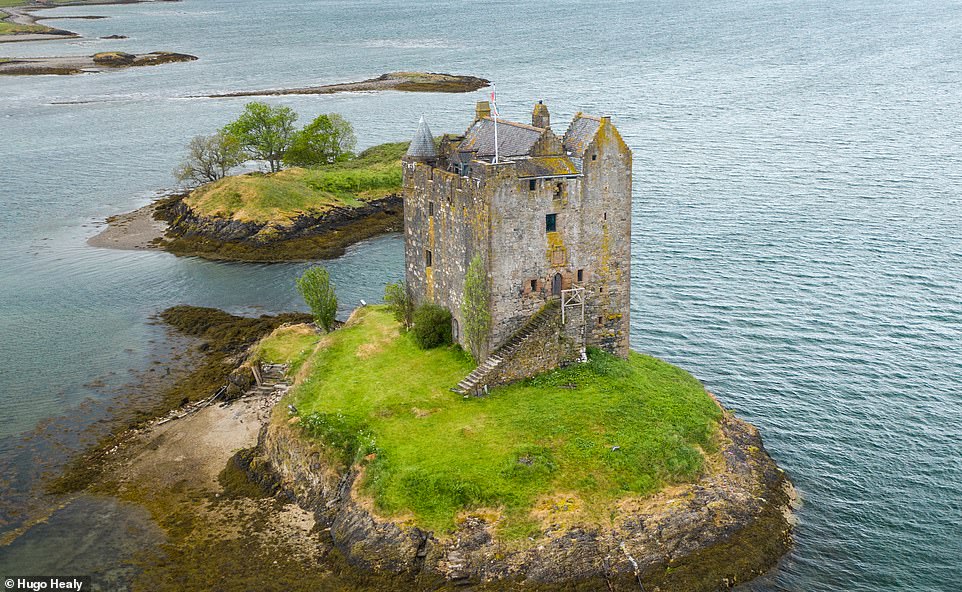 This photograph shows the amazing Castle Stalker, located on a tidal island on the west coast of Scotland, 25 miles north of Oban. The 14th-century fortress, described by Healy as ‘one of Scotland’s many gems’, was used as the filming location for the final scene in Monty Python and the Holy Grail. 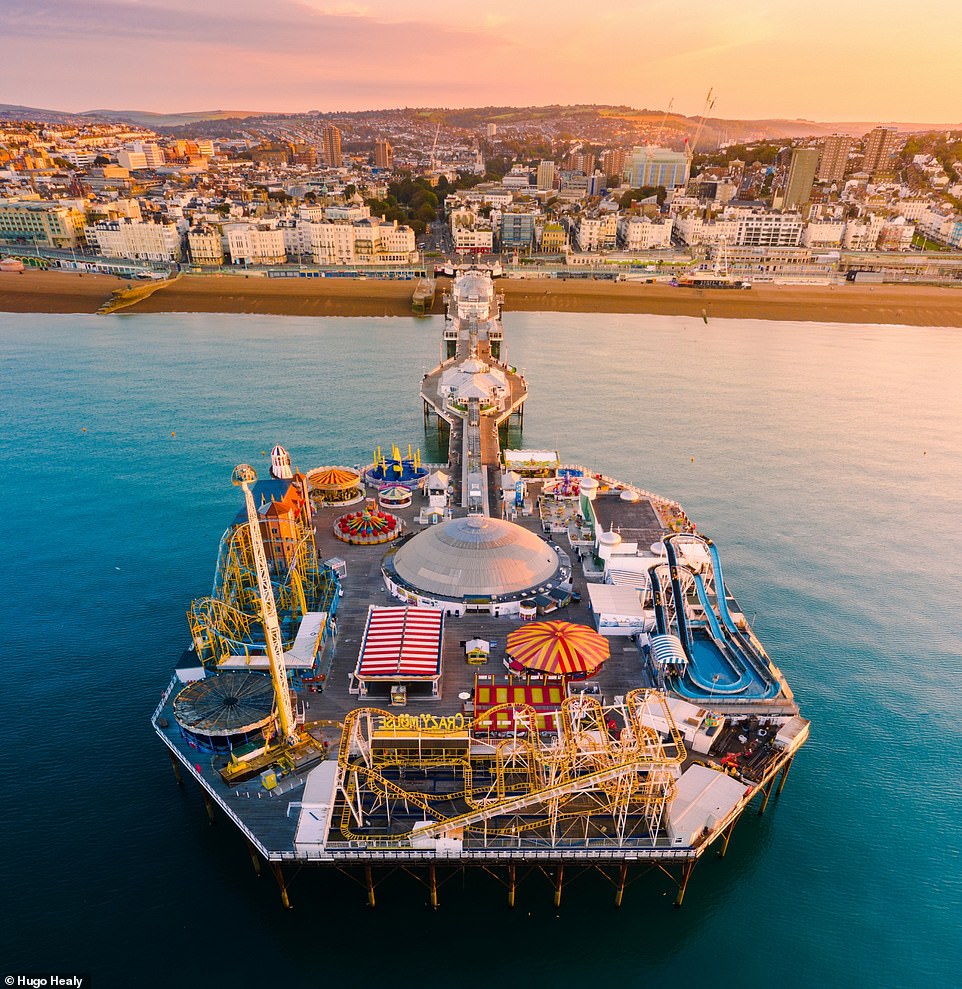 In the Instagram post dedicated to this photo of Brighton Palace Pier, Healy says the picture made him yearn to return to his hometown to visit family and friends. 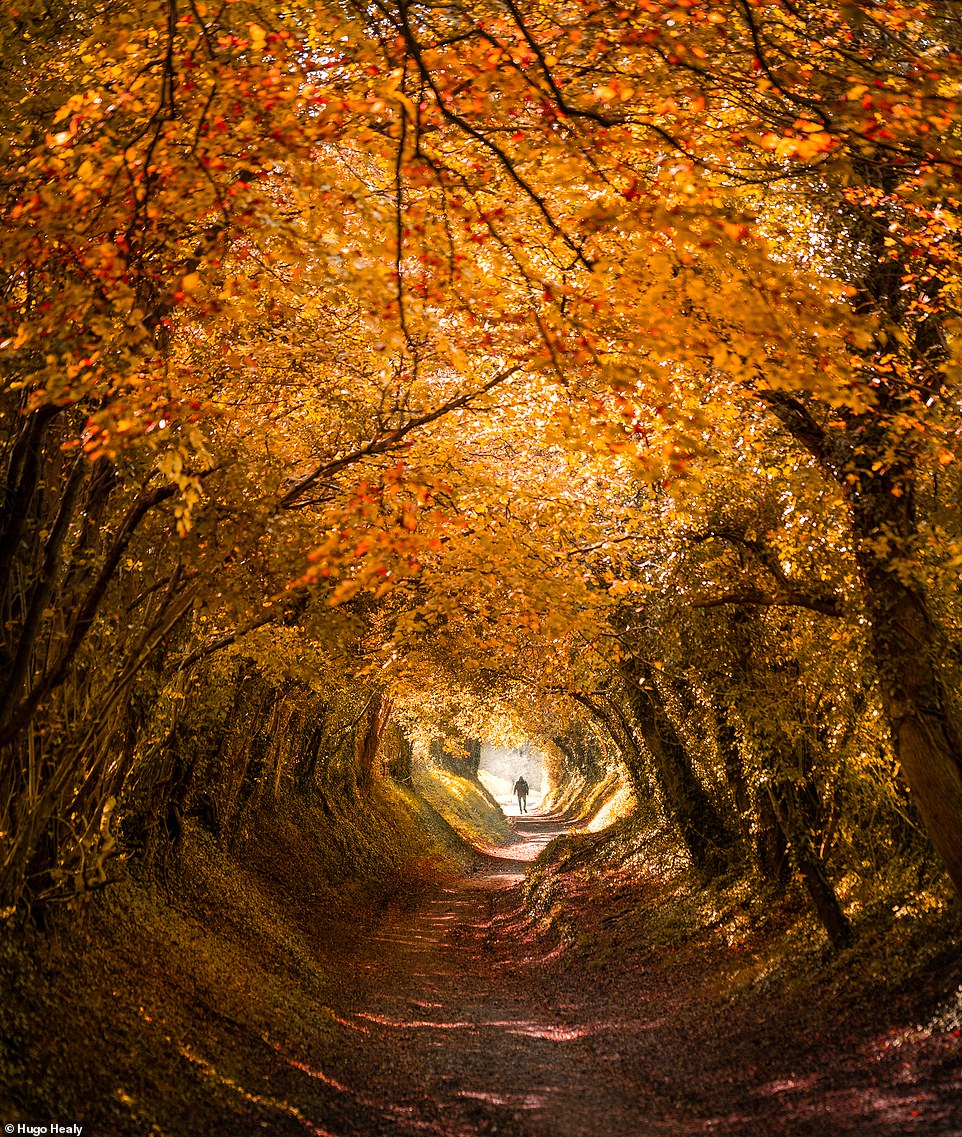 A hypnotic shot of Mill Lane in the hamlet of Halnaker, just north of Chichester in West Sussex, in the South Downs National Park. ‘It’s been amazing exploring and capturing some places closer to home,’ Healy says of the beautiful autumn shot 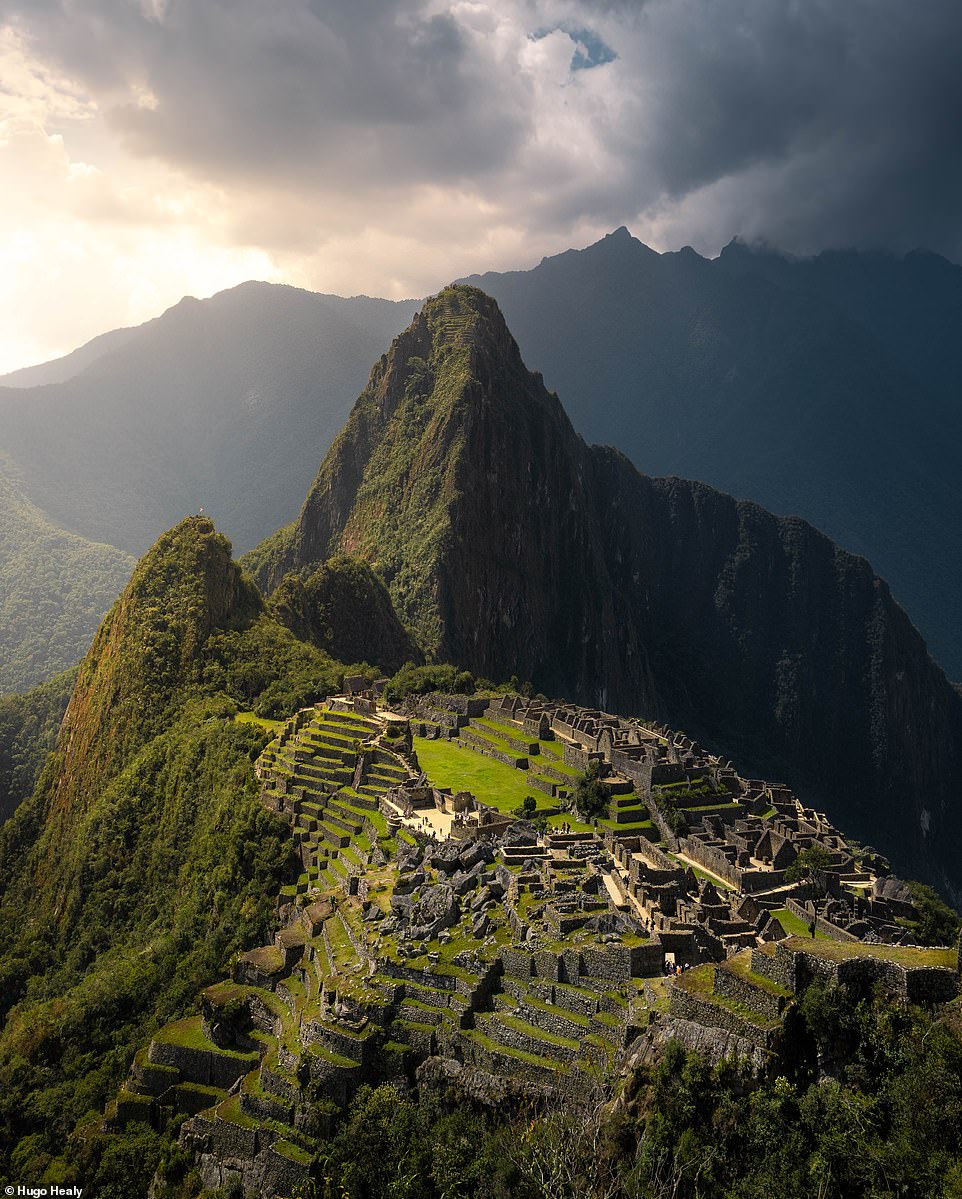 Healy tells MailOnline Travel that he will ‘always wait for the right light’ before taking a shot. This image shows the sun bathing the ruins of Machu Picchu, located northwest of Cuzco, Peru. The highest point of the Incan ruin, thought to date back to 1450, is 2,430m (7,970ft) above sea level. 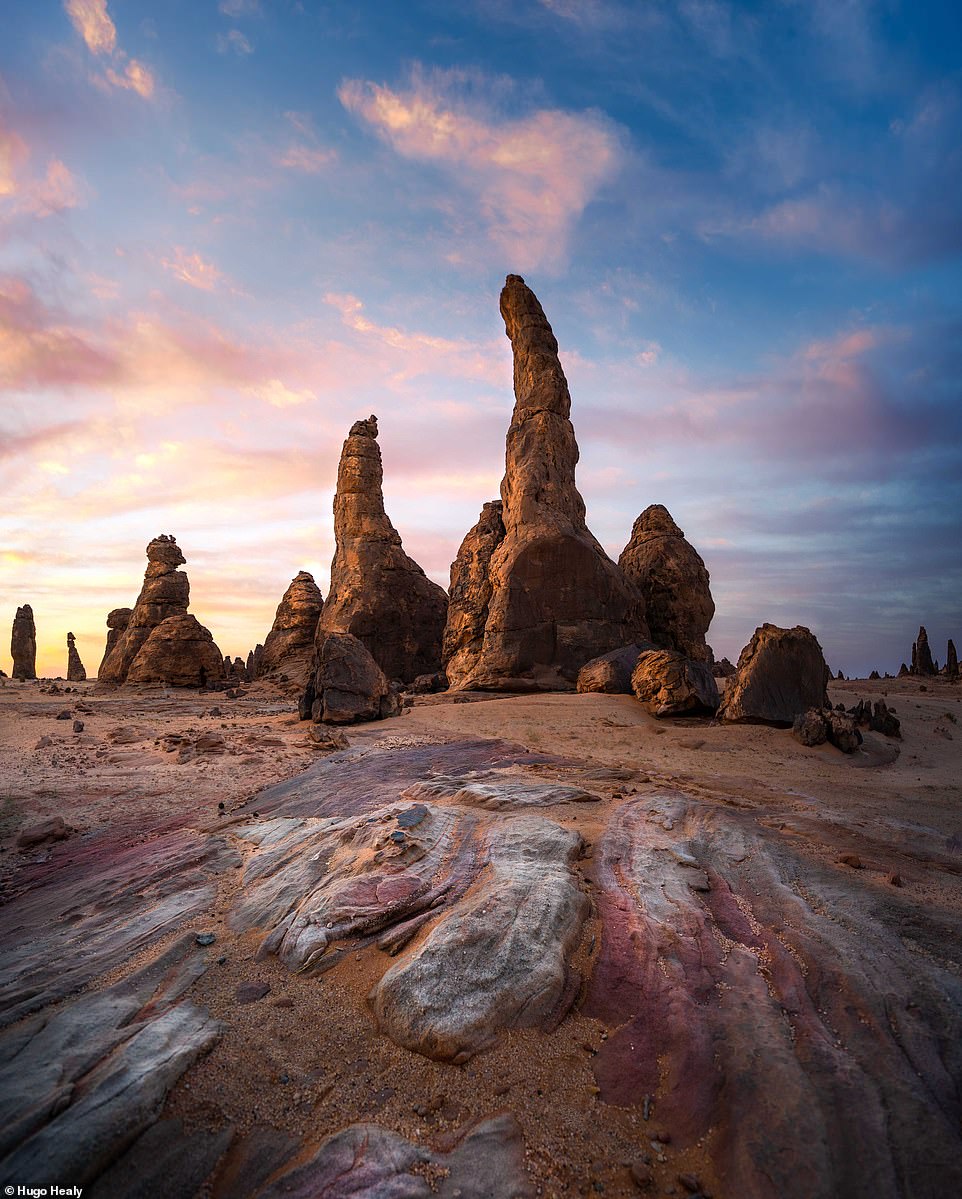 This stunning picture shows one of the incredible rock formations of Gharameel, an area that’s around 100km (62 miles) north of the city of AlUla in Saudi Arabia. 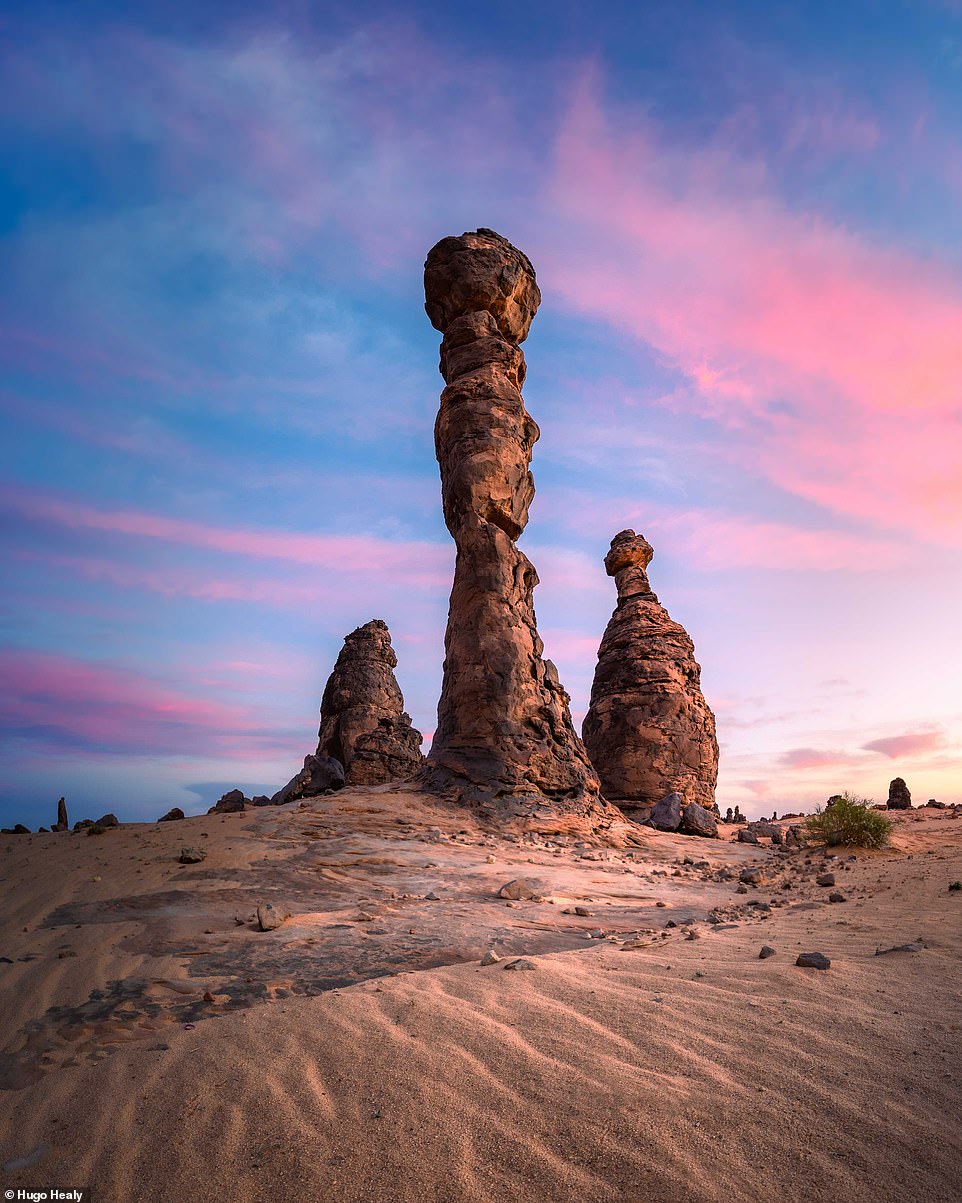 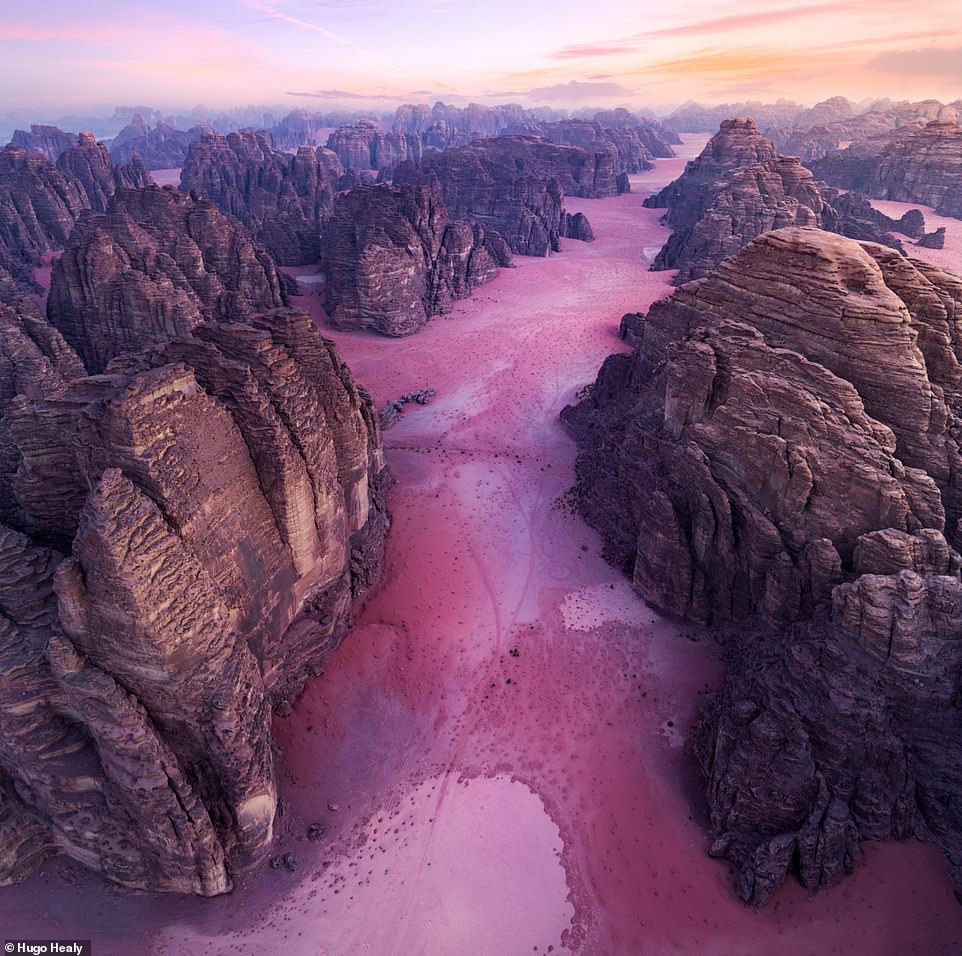 This pink-hued shot was taken in the deserts of Tabuk Province of northwestern Saudi Arabia, near the borders with Jordan and Egypt, in a part of the region that is being developed into a $500billion city-state called ‘Neom’, covering 10,000 square miles. Neom will consist of three manmade cities and a ski resort, all free of cars and roads and powered by 100 per cent clean energy. Residents are expected to move in as early as 2024. 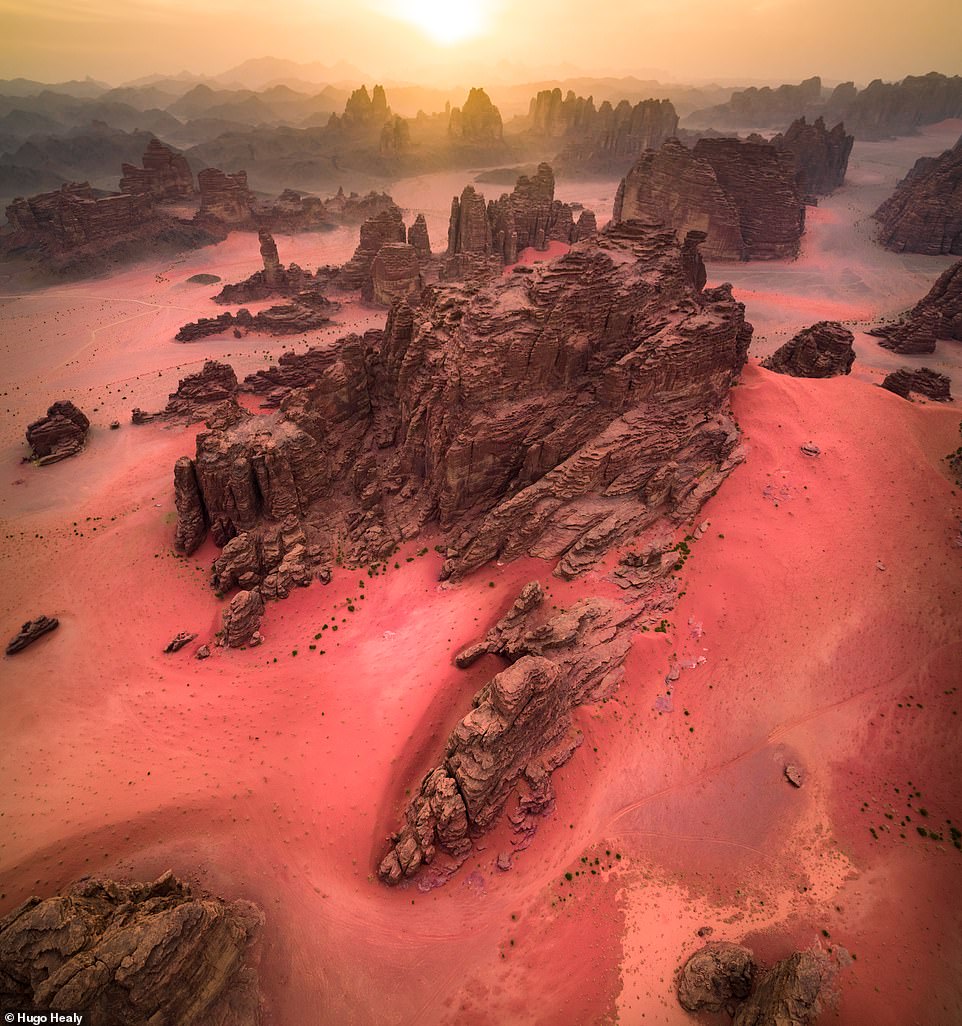 Above is a view of the Martian-like landscape around the part of northwestern Saudi Arabia that is being developed into Neom. Healy describes the area as ‘one of the most fascinating regions I have ever been in’. 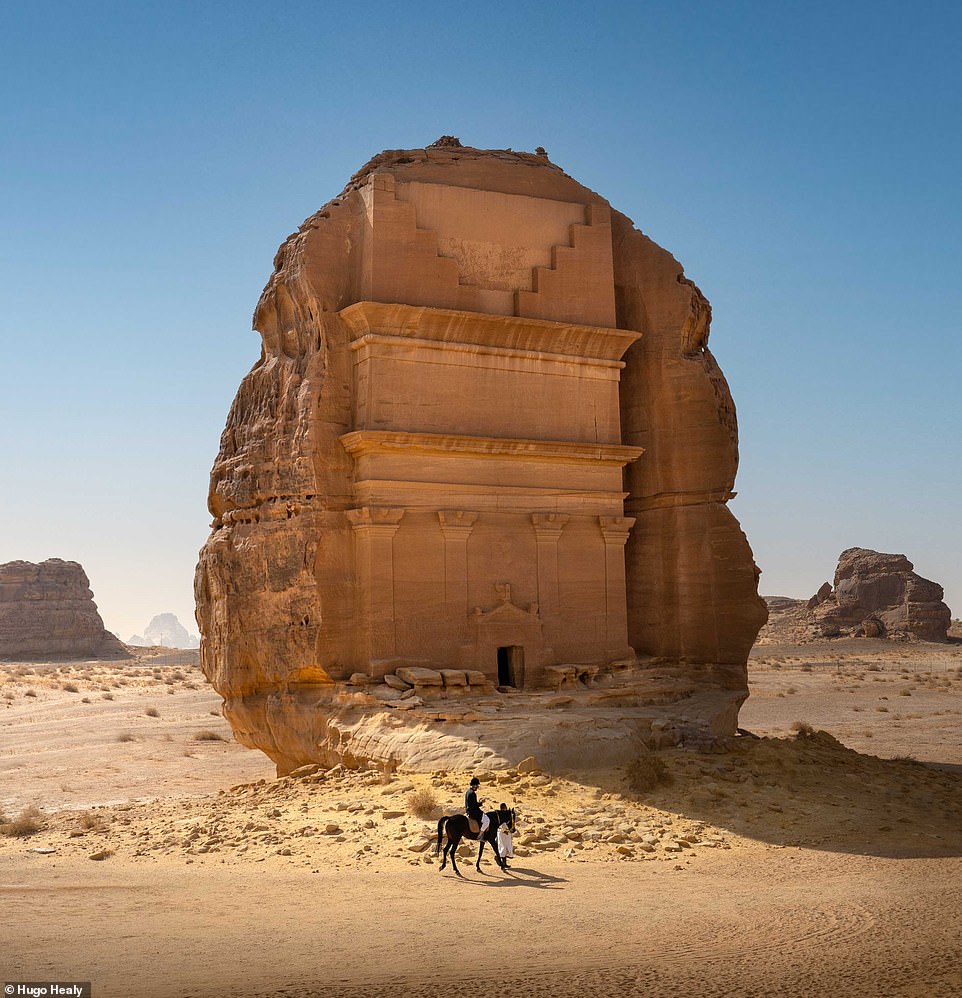 Saudi Arabia was again the setting for this powerful shot, with Healy turning his lens on the Tomb of Lihyan Son of Kuza, the largest tomb in the archaeological site of Hegra, northwest of Medina. The historical landmark, also known as ‘The Lonely Castle’, measures 22m (72ft) in height and is thought to date back to the 1st century CE. 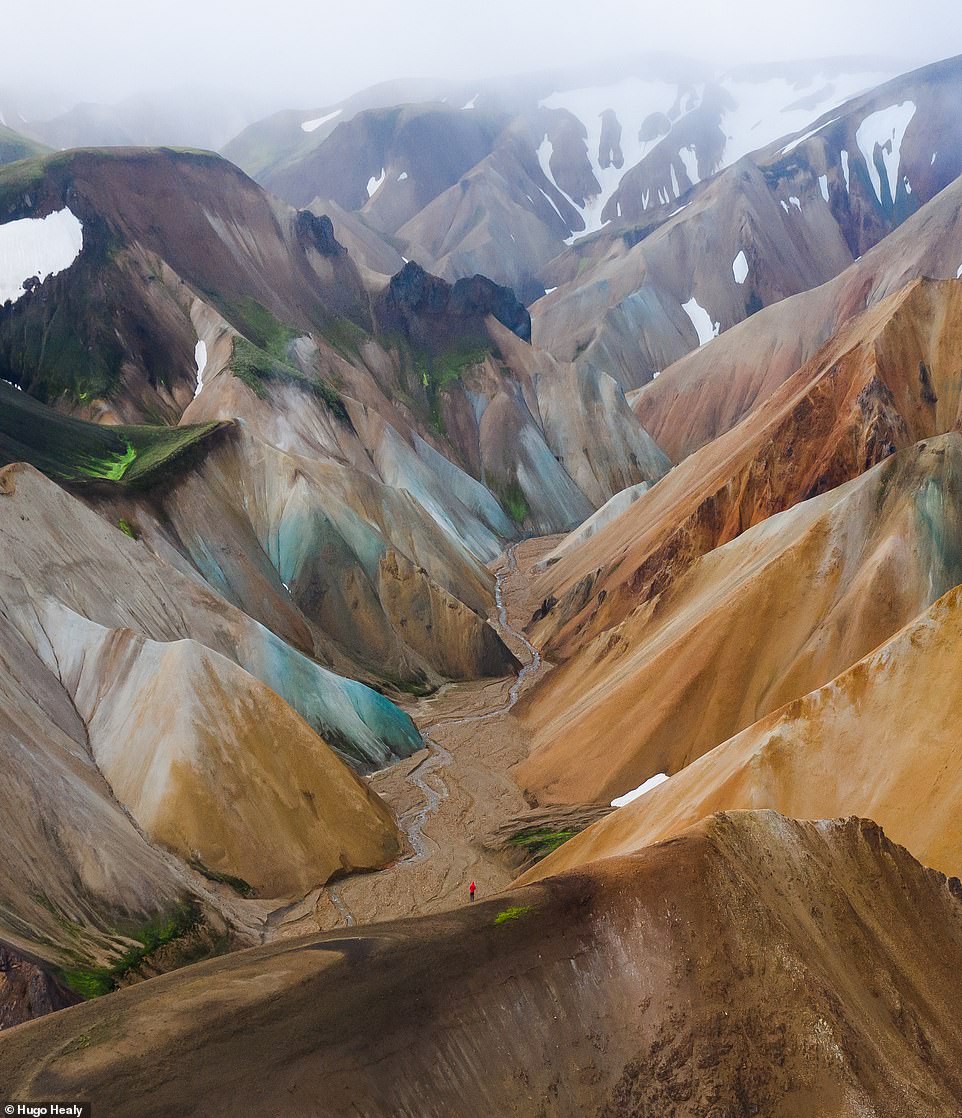 This spellbinding photo captures Landmannalaugar, a geothermal area of the Fjallabak Nature Reserve in the Highlands of Iceland – a 40,000-sq-km (15,445-sq-m) region that covers much of the country’s interior. Healy says of the shot: ‘One of the most beautiful areas in the Highlands! Landmannalaugar offers incredible scenery, unique hiking trails, vast lava fields, colorful canyons, natural hot springs and some epic camping’. 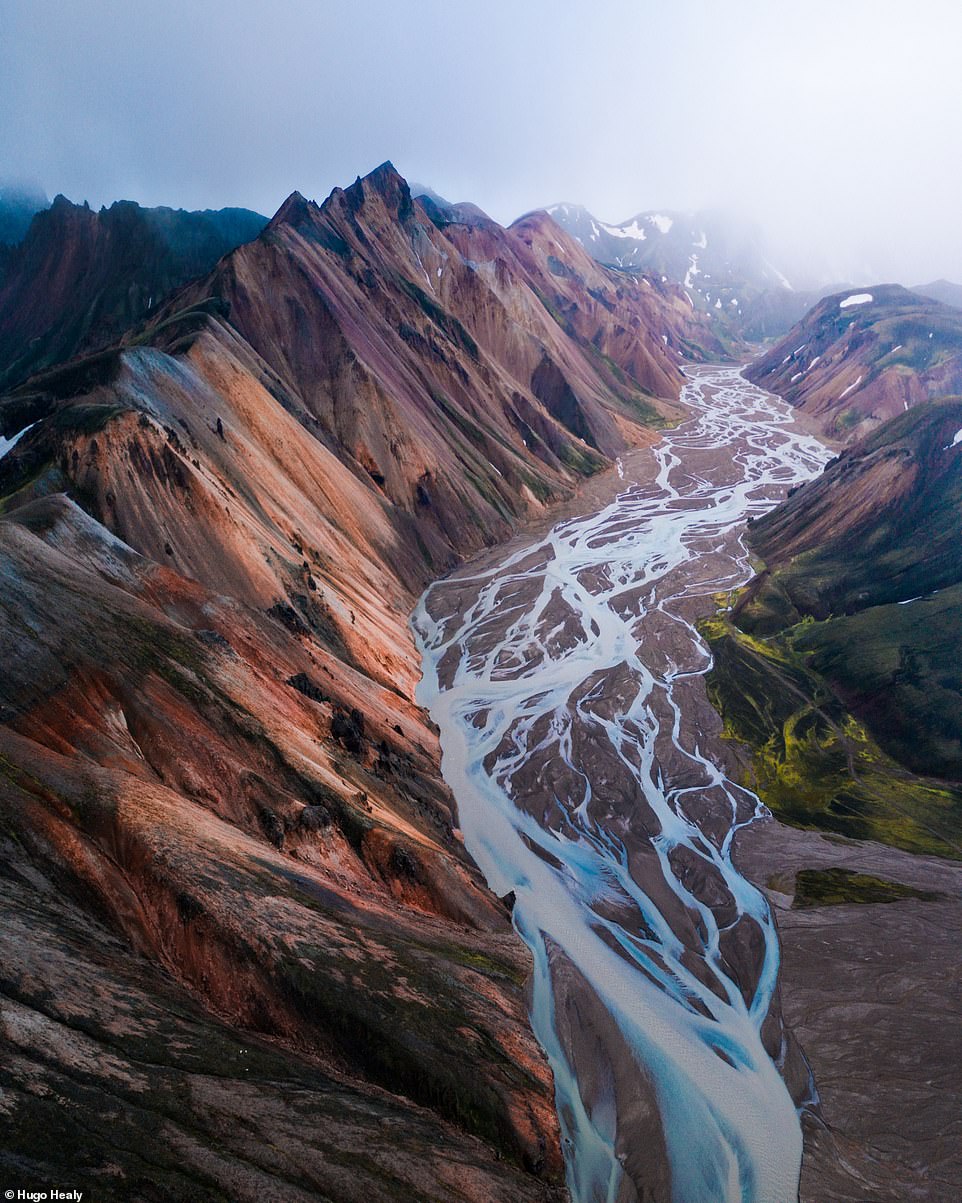 An aerial shot in Iceland, which Healy says is one of his favorite countries to shoot in for the ‘sheer beauty of the landscapes’. 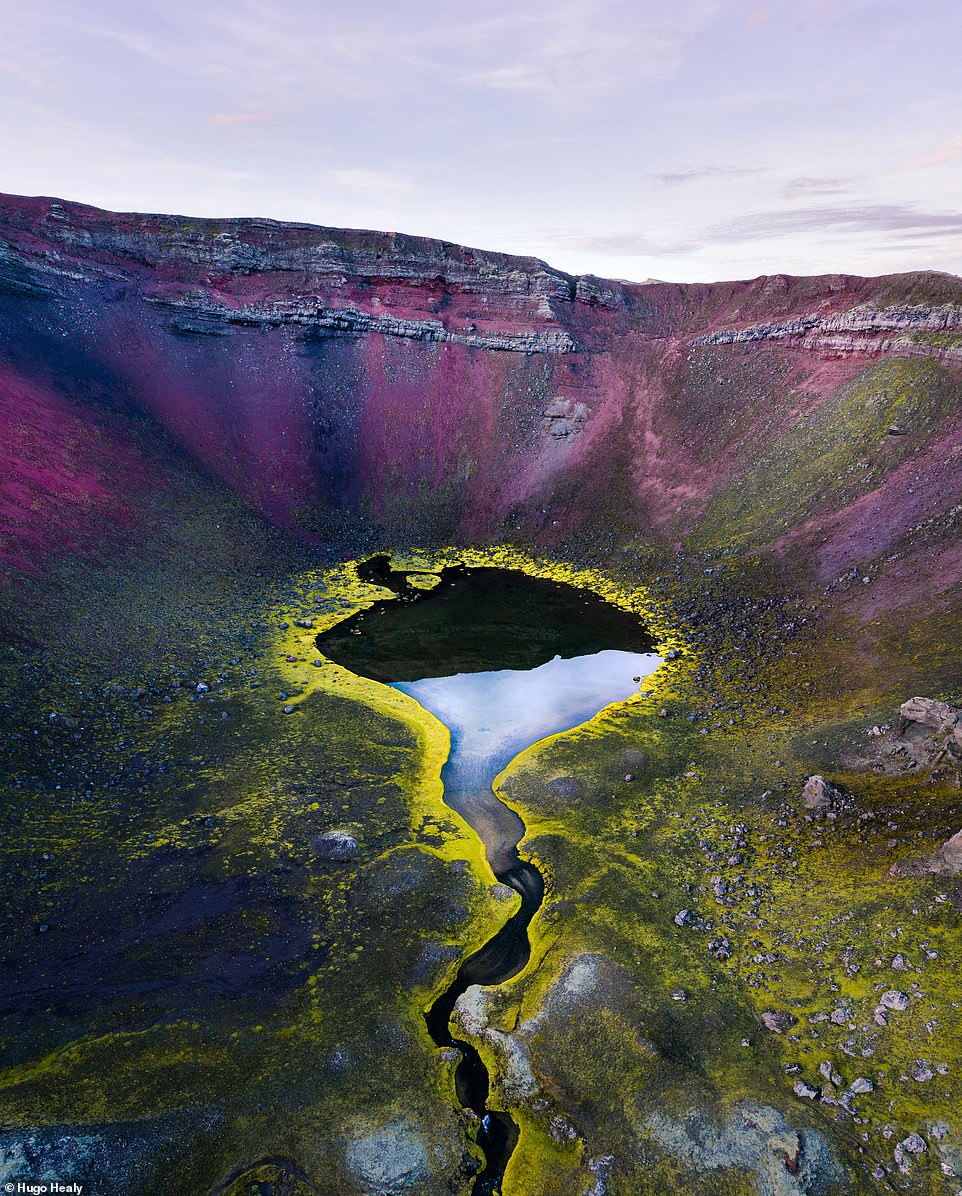 These volcanic crater lakes in Iceland, as captured by Healy, look they belong to another planet. 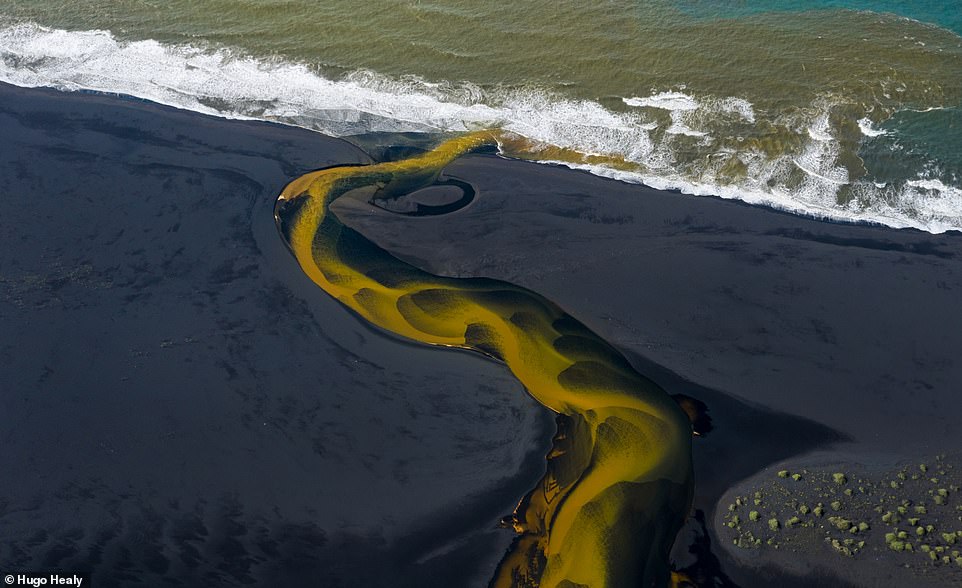 This shot shows Iceland’s Affall River, which runs east of the town of Hvolsvollur, about 120km (74 miles) from the capital of Reykjavik. The yellow color of the water, seen here cutting through a black-sand beach, is picked up from the sulfur-rich sediment of the volcanic areas nearby. 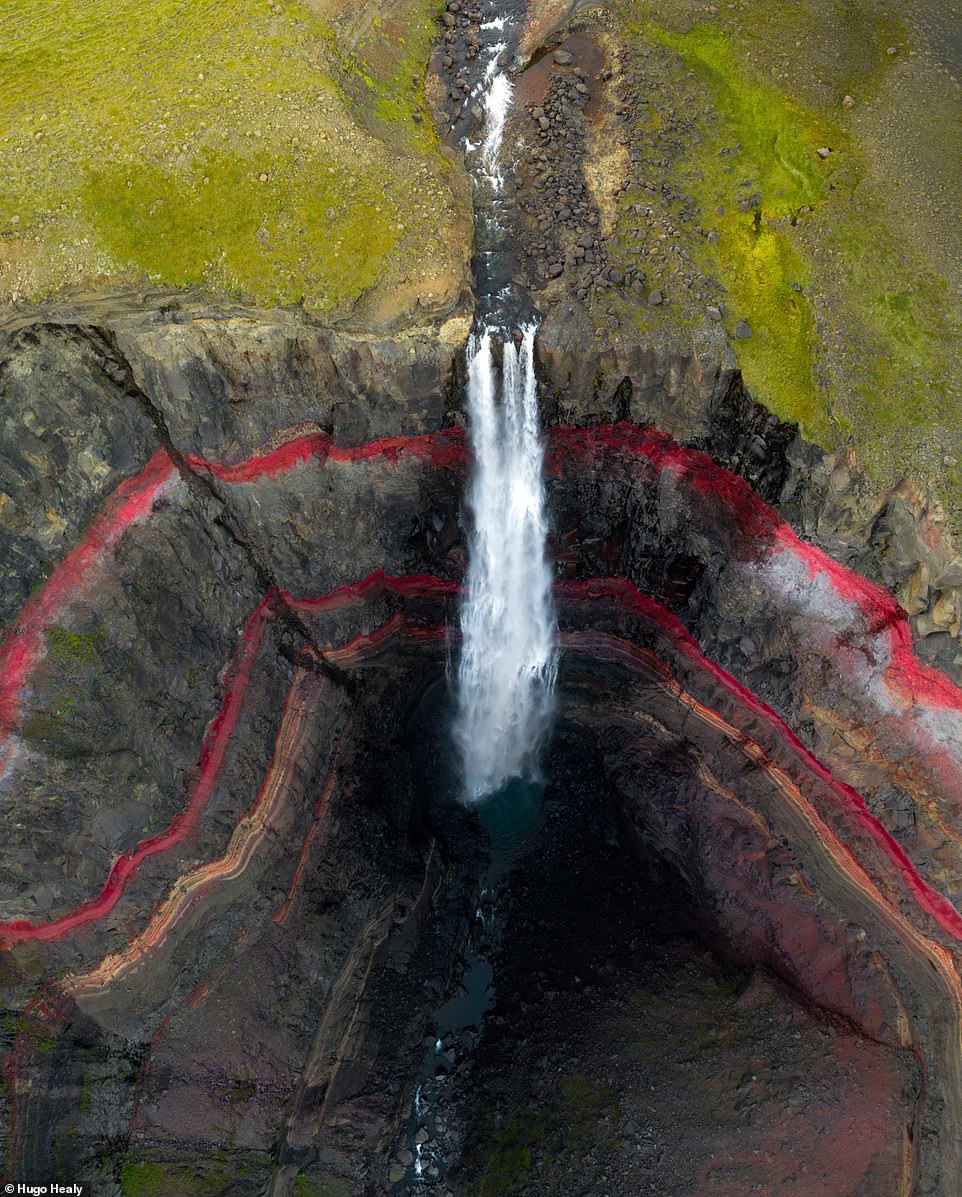 Healy’s incredible shot of Hengifoss waterfall, part of the river Hengifossa in East Iceland. The 128m- (420ft-) high natural wonder is the third highest waterfall in the country. The photographer says that it is one of his favourite waterfalls in Iceland because its horizontal strips of red clay between the rock make it look like a ‘lava sandwich’. He adds: ‘Quite extraordinary right? Ancient volcanic geology that is a must-see’. 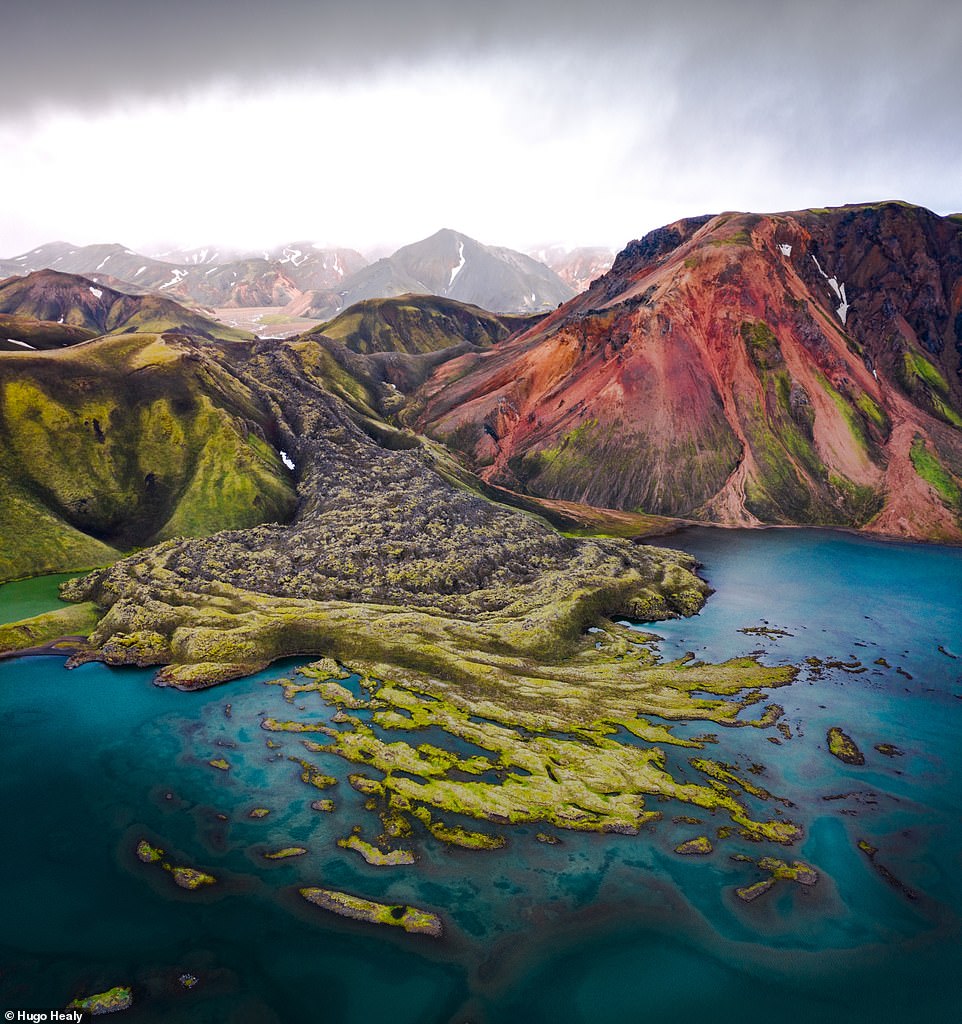 ‘Wow! Breathtaking,’ one of Healy’s fans said of this photo, which shows a dramatic lava flow at Frostastaoavatn lake in the southern part of the Highlands of Iceland. 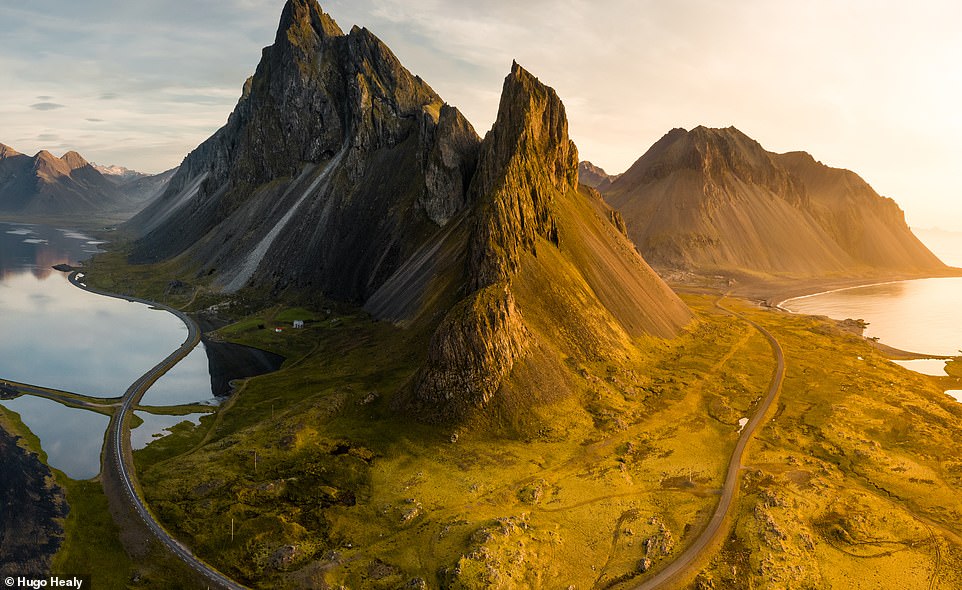 Above is a spectacular shot of Eystrahorn mountain in east Iceland, which Healy took while road-tripping around the country. The mountain, which measures 756m (2,480ft) in height, is part of the Krossasnesfjall mountain range, and the ‘Ring Road’ that sweeps past it goes towards the fishing town of Hofn to the south, and towards the town of Egilsstaoir to the north. 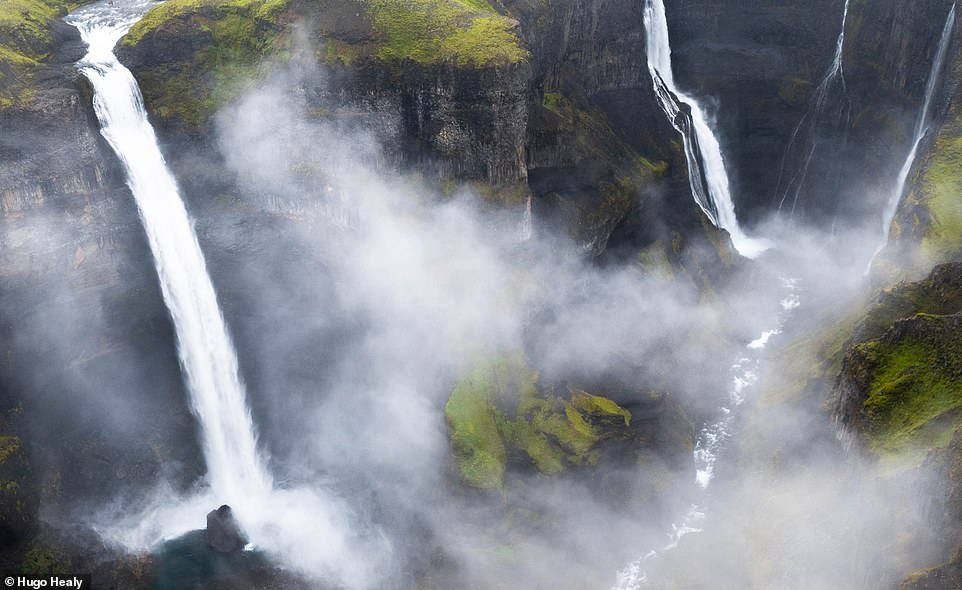 This powerful shot shows the 122m- (400ft) high Haifoss waterfall in southern Iceland. Reflecting on his visit to the waterfall, which is part of the Fossa river, the photographer says: ‘It’s always an amazing feeling standing in front of such power and beauty’. 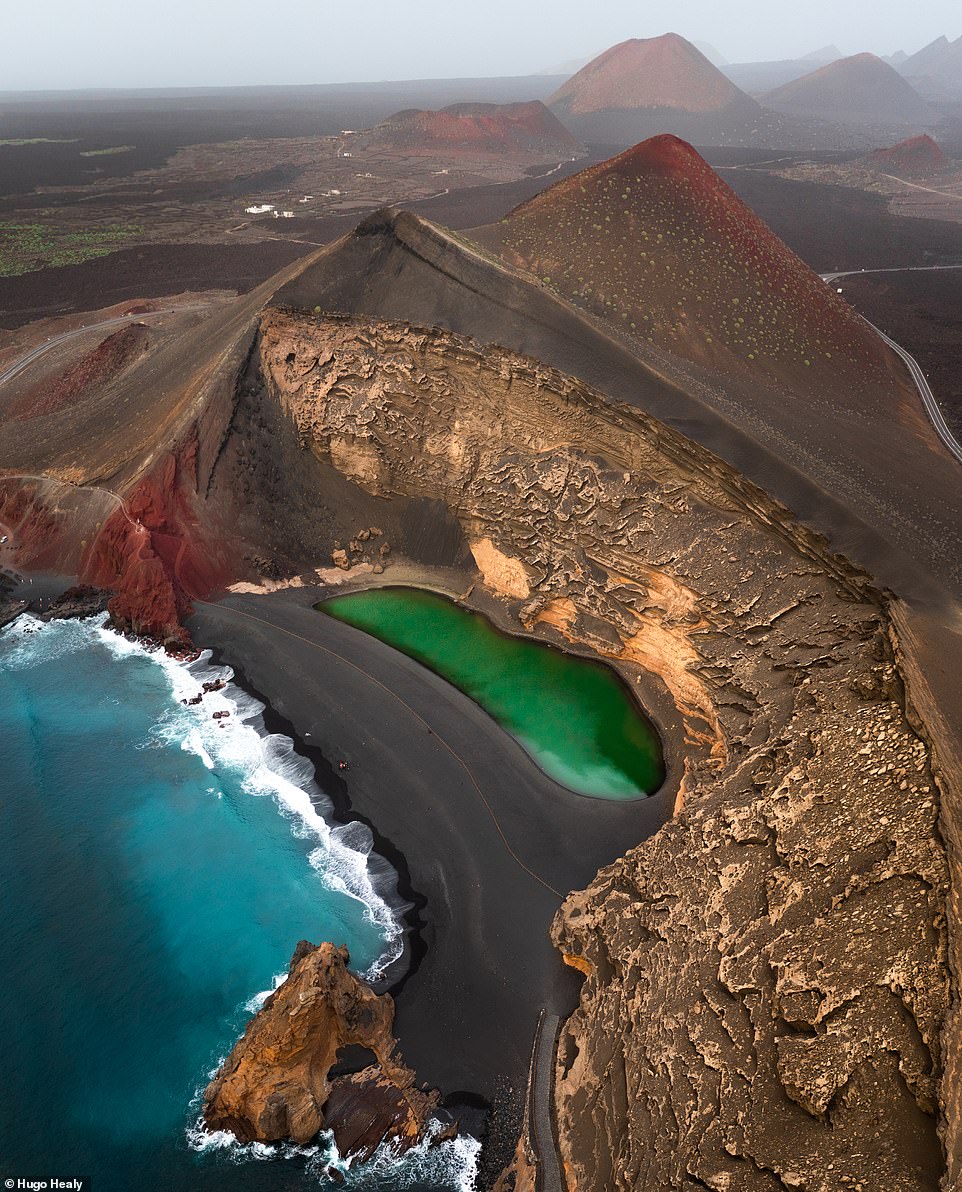 An otherworldly shot of Lanzarote’s Charco de los Clicos, or the ‘green lagoon’. The lagoon is located by a black-sand beach just south of the village of El Golfo inside the ocean-eroded semi-circular remains of a volcanic cone that’s connected to the Atlantic via subterranean passageways, so the water is continually topped up. Shedding light on his photography style, the photographer says that he loves using drones as they ‘open up the opportunity to pretty much capture any angle you can dream of and in a relatively short amount of time’. 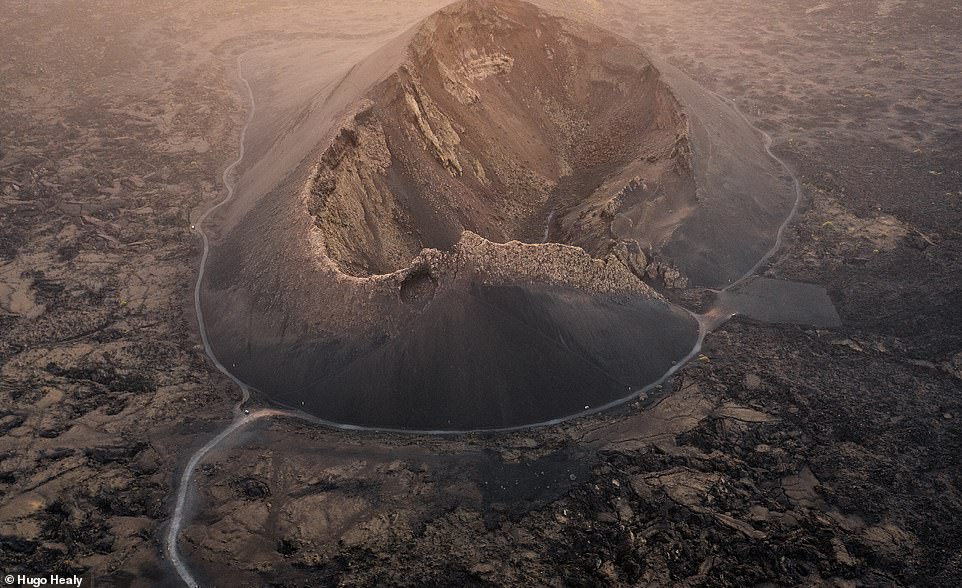 Another image taken in Lanzarote, which Healy says was the first one he took after landing on the island. 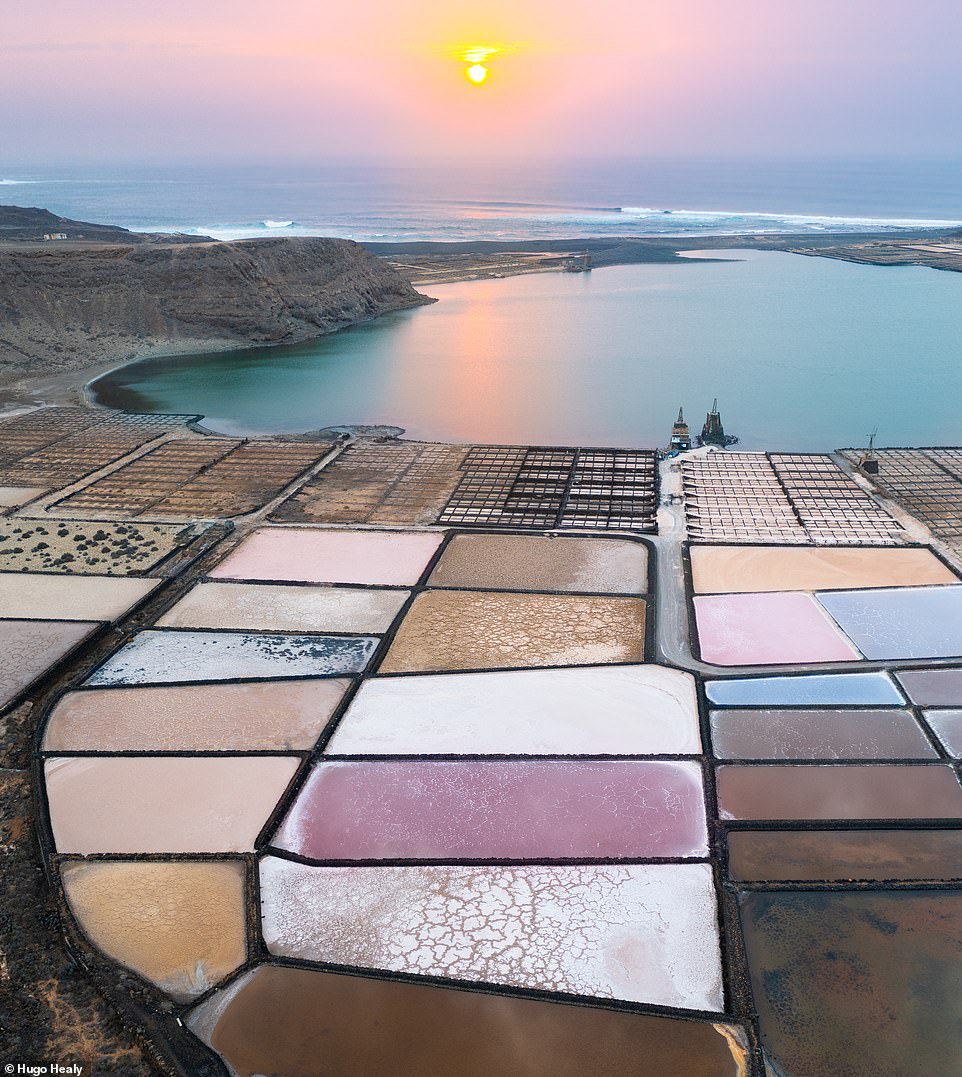 This picture shows the Salinas de Janubio salt flats in the south west of Lanzarote. Avid traveller Healy says of the image: ‘I’ve always loved the aerial perspective of salt flats. They create unique textures, patterns and colors. This beautiful evening was rather overcast, then 15 minutes before the sun was set to disappear, it burst out of the thick layer of cloud filling the sky with color and created some awesome reflections in the flats below’. 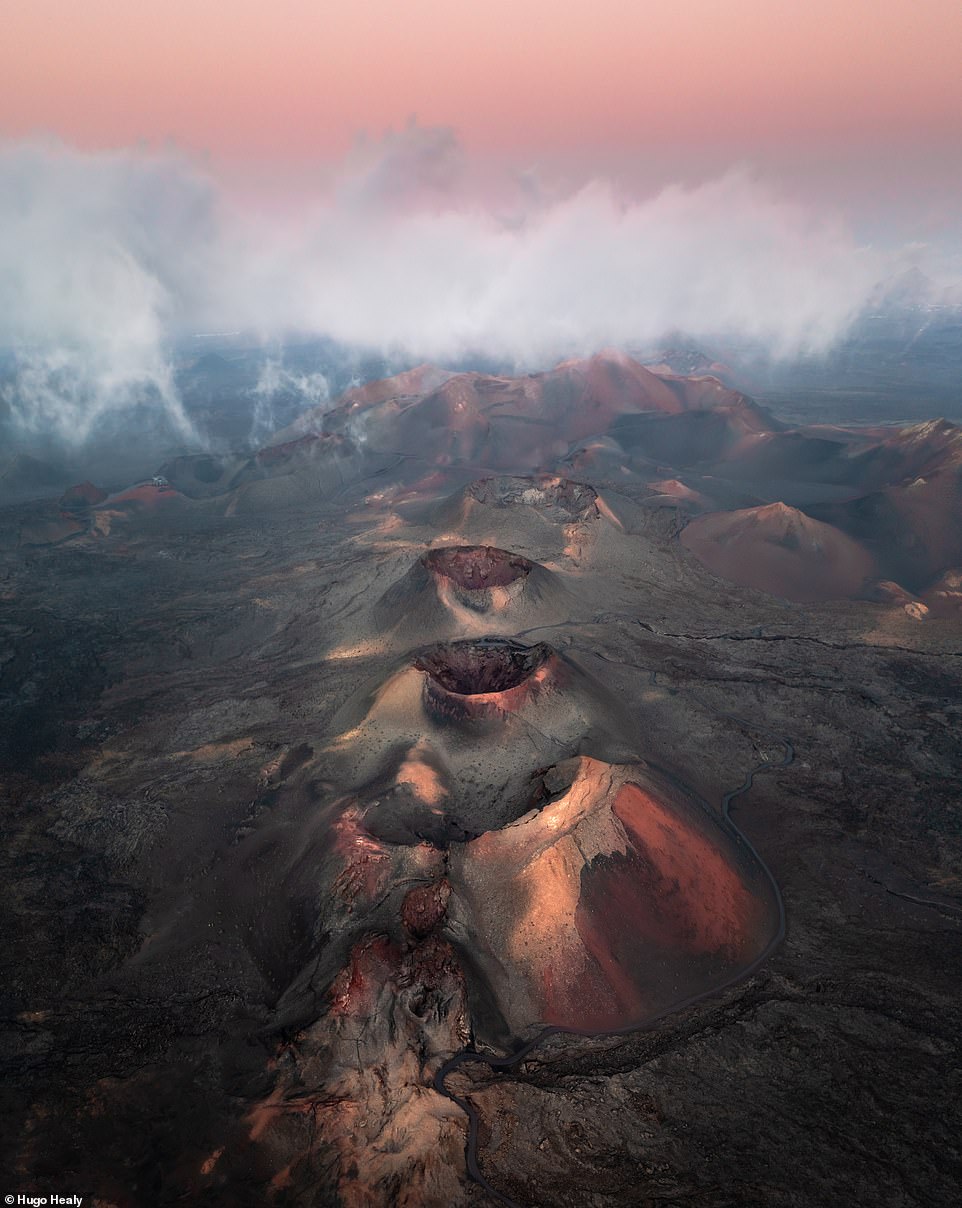 A powerful picture of Lanzarote’s volcanic landscape. Shedding light on how he finds angles for his shots, the photographer says: ‘Sometimes I have ideas about what angles I want but most of the time I just send it up and find the compositions in the air! Everything always looks so different from the sky and that’s what I love!’. 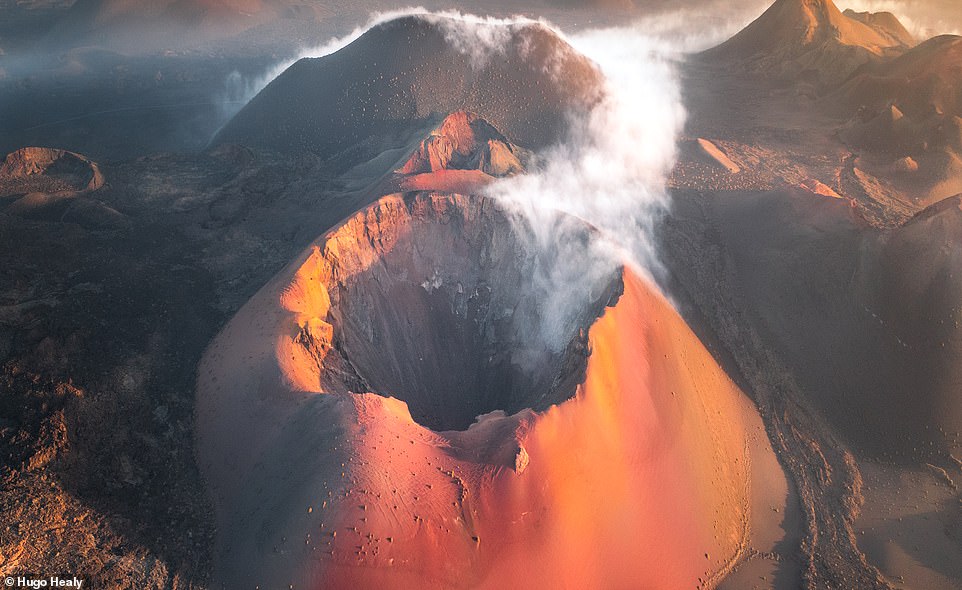 Pictured: Plumes of smoke drifting over volcanic cones on Lanzarote. 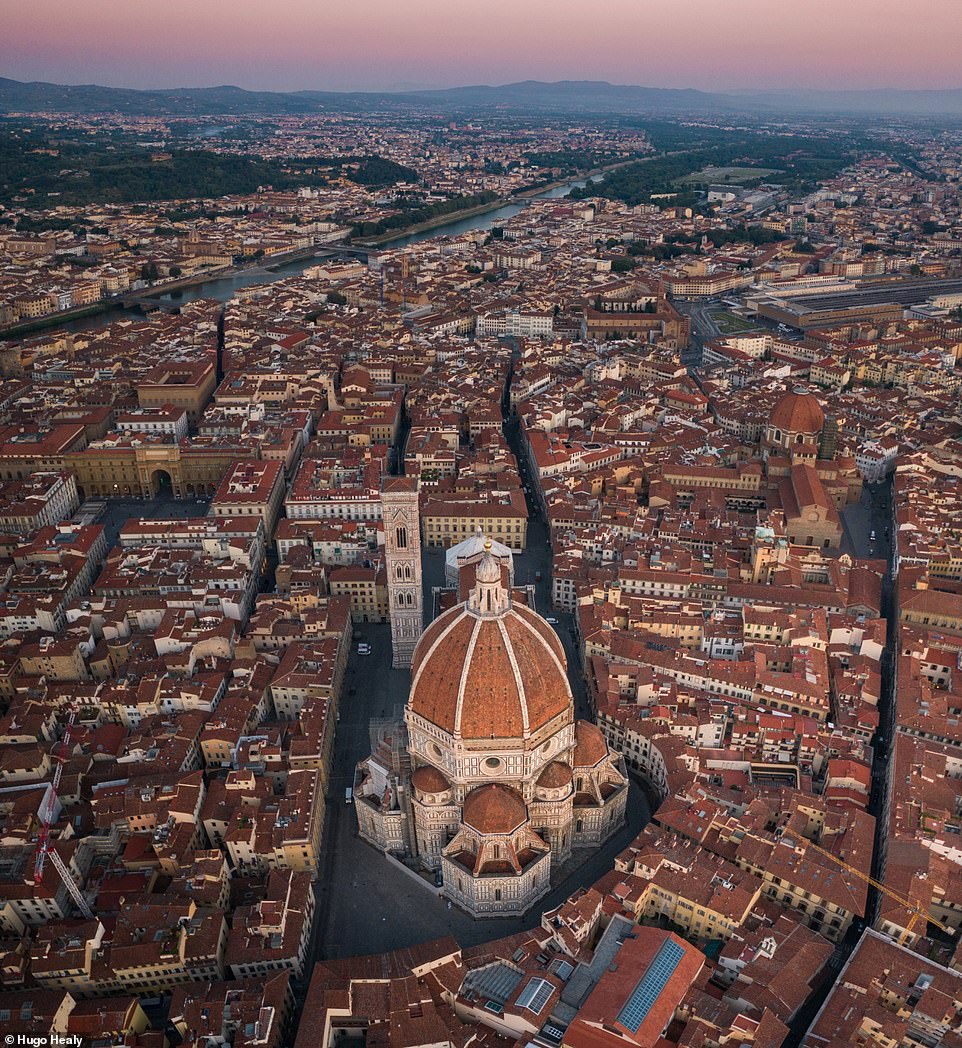 It was an early start for Healy when he ventured out to capture the sun rising over the Cathedral of Santa Maria del Fiore in Florence for this awe-inspiring shot. The Gothic cathedral – one of the largest in the world – dates back to the end of the 13th century. 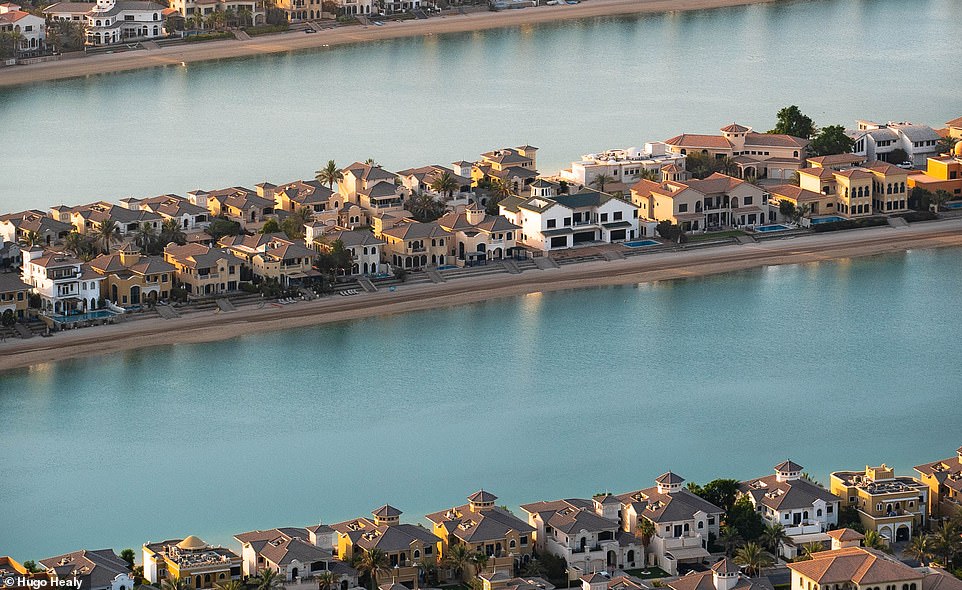 This clever shot is Healy’s unique capture of the exclusive resort and residential complex The Palm in Dubai.