Insulin pumps cause more injuries than any other device in the US, study reveals

Insulin pumps cause more problems than any other medical device in the US, a new report reveals.

An Associated Press analysis of US Food and Drug Administration (FDA) data since 2008 found insulin pumps and their components to be responsible for the highest overall number of malfunctions, injuries and deaths.

Medical experts and manufacturers often blame user error for most of the reported problems.

But in terms of injuries alone, the devices, which deliver rapid- or short-acting insulin 24 hours a day through a catheter placed under the skin, were second only to metal hip replacements.

Medical device manufacturers and experts say insulin pumps (pictured) are safe. But an AP investigation found that insulin pumps and their components are responsible for the highest number of malfunction, injury and death reports

Diabetes occurs when the body produces little to no insulin, the hormone needed to get glucose from the bloodstream into cells.

Insulin pumps are small, computerized devices that mimic a normal pancreas, and have two main components: the pump and the infusion set.

In addition to maintaining the device, users also must monitor their diets and manually input information, such as the rate of insulin delivery.

Companies aggressively market the device to adults and children. For instance, Medtronic – which makes most of the pumps in use today – has a company mascot, Lenny the Lion, for its estimated 250,000 children users.

They blame user error for most reported problems, noting that the pumps are complicated devices requiring special training for patients.

But over the last decade, insulin pumps and pump parts made by Medtronic Inc were subject to 20 manufacturer recalls and about 100 lawsuits alleging pump malfunctions.

In the more than 150,000 reports of deaths or injuries, the AP found that Medtronic offered ‘no conclusion can be drawn at this time’ as the cause in more than 80 percent of the reports.

The second most common phrase: ‘Currently it is unknown whether or not the device may have caused or contributed to the event as no product has been returned.’

The FDA’s data offers no explanation for why the devices have so many adverse events. Many of the reports filed by doctors, manufacturers and patients lack critical information – a reporting failure the FDA acknowledges across all devices.

In a statement, Medtronic said it monitors the safety of its products through clinical trials and observational studies, and that ‘data supports both the safety and efficacy of our insulin pumps, which have helped hundreds of thousands of patients manage their diabetes.’

Polly Varnado’s nine-year-old daughter was diagnosed with Type 1 diabetes in September 2012 and, when it came time to buy an insulin pump, her daughter selected a Medtronic purple one – her favorite color.

Over the next seven months, she was hospitalized four times in a medical center in McComb, Mississippi, with high blood sugar. 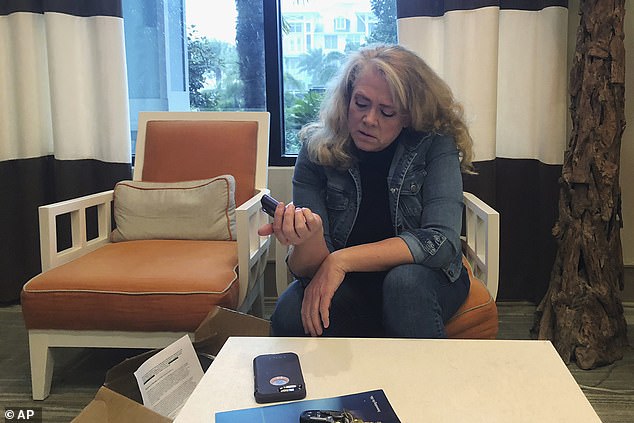 From September 2012 to April 2013, Polly Varnado’s nine-year-old daughter was hospitalized four times in a medical center in McComb, Mississippi medical center with high blood sugar. She said once her daughter stopped using the pump, she never went back to the hospital

But Varnado said when she asked about all her daughter’s problems, her doctor blamed user error.

Varnado said she was unaware of problems with insulin pumps before receiving a notice in July 2013 that Medtronic was recalling some batches of parts for the model her daughter had used.

She reached a confidential settlement with the company in March 2017 after filing a federal lawsuit contending the device failed to properly deliver enough insulin.

She remains convinced that the device harmed her child.

‘Once she got off the pump, she never went back to the hospital,’ Varnado said.

Dr Ben Wheeler, a leading pediatric diabetes researcher in Australia, told the AP that the use of insulin pumps ‘appears safe’ and is ‘potentially safer’ than insulin injections, the traditional method of treatment.

Still, a 2015 study he coauthored found that 40 percent of insulin pump users experienced problems, ‘with a minority, particularly in children, requiring hospital management’.

The study also said ‘it is noteworthy that overall pump failure rates do not appear to be improving with technological advances.’

The FDA notes that the number of pump recalls has decreased over the last five years – from about eight annually over the previous 10 years to an average of three per year.

It credits this drop to a 2010 initiative aimed at ramping up requirements for manufacturers and increasing user awareness.

But 2013′s recalls included one on the most serious level concerning the Medtronic MiniMed Paradigm insulin infusion set, with the FDA noting that ‘under certain conditions, the infusion set may malfunction and deliver an incorrect volume of insulin.’