A damning revelation that 90.5 per cent of plastic waste in the world has never been recycled has been crowned as the ‘international statistic of the year’.

The society picked the statistic and said the low level of recycling is ‘concerning’ and a ‘genuinely worldwide problem’.

The research came from a UN report by academics Roland Geyer, Jenna Jambeck and Kara Lavender Law and was nominated for the award after appearing on MailOnline.

Britain’s Royal Statistical Society today announced the winner from a series of public nominations. it found  that 90.5 per cent of plastic waste in the world has never been recycled has been crowned as the ‘international statistic of the year’ (file photo)

The chair of the judging panel and RSS President, Sir David Spiegelhalter, said: ‘It’s very concerning that such a large proportion of plastic waste has never been recycled.

‘The really low level of recycling has resulted in far too much waste leaching out into the world’s environment.

‘This statistic helps to show the scale of the challenge we all face. It has rightly been named the RSS’s “International Statistic of the Year” for 2018.’

Other statistics that were selected by the committee as particularly noteworthy included Jaffa Cakes, Kylie Jenner and the lack of females in high-ranking positions at FTSE250 firms.

The UK winner of statistic of the year pertained to the amount of energy created by solar energy – which peaked at 28.7 per cent on June 30.

‘Highly commendable’ international research included the amount of measles cases in the world (64,946) from November 2017 to October 2018.

A UK-specific study was commended for finding that only 85.9 per cent of all British trains ran on time -the lowest for more than a decade.

The winning report found that around 30 per cent of the plastic ever produced in the world is still in use.

Out of plastic that was not recycled  (estimated at 6,300 million metric tonnes), it has been calculated that 90.5 per cent has never been recycled.

This includes approximately 12 per cent of plastic waste was incinerated and all remaining waste was sent to landfill or left in the natural environment.

It found that up to 5 trillion plastic bags are used worldwide each year. Spread out side-by-side, they would cover an area twice the size of France.

Public awareness of the problem has been growing, particularly after filmmaker David Attenborough’s documentary ‘Blue Planet II’ showed sea turtles shrouded in plastic among other horrors.

Professor Roland Geyer commented: ‘We’re honoured to receive this recognition from the Royal Statistical Society and its judging panel. We hope it will help draw attention to the problem of plastic pollution that impacts nearly every community and ecosystem globally.’

The report has been released on World Environment Day, which this year is based in India and is focusing on plastic pollution.

‘If you can’t reuse it, refuse it’ is the slogan of the report, compiled by the UN alongside the Indian government and launched today.

Erik Solheim, head of UN Environment, said in the report: ‘The scourge of plastic has reached every corner of the Earth.’ 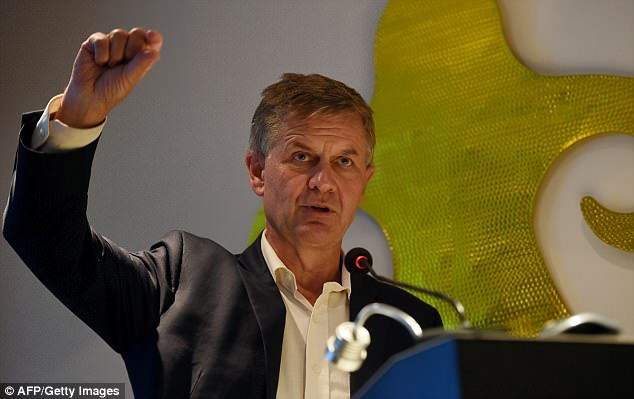 Erik Solheim (pictured), head of UN Environment, said in the report: ‘The scourge of plastic has reached every corner of the Earth’

WINNER – INTERNATIONAL STATISTIC OF THE YEAR 2018

‘Only nine per cent of the nine billion tonnes of plastic the world has ever produced has been recycled,’ the report said.

‘Most ends up in landfills, dumps or in the environment.’

China is the biggest source of plastic packaging waste, ahead of the European Union and the United States.

Per capita, however, the United States produces most, ahead of Japan and the EU.

But there are signs of action to limit plastic pollution, which harms life in the oceans, contaminates soils and releases toxic chemicals when burnt.

‘Targeted levies and bans – where properly planned and enforced – have been among the most effective strategies to limit overuse of disposable plastic products,’ the report said.

Elisa Tonda, who leads the UN Environment’s Sustainable Lifestyle programme, said more than 60 countries had bans or charges on single-use plastics such as bags or polystyrene containers.

Thirty per cent of countries found sharp drops in plastic bag consumption in the first year after imposing restrictions, while 20 per cent saw little or no change.

In half of the cases, however, governments failed to gauge the effects of restrictions, the report said.

Among its recommendations, the report called for better sorting of waste and recycling, economic incentives to promote eco-friendly alternatives to plastics, education of consumers and promotion of reusable products.

In South Africa, plastic litter is jokingly referred to as ‘the new national flower’.

In Ireland, windblown plastic bags caught in trees are referred to as ‘witch’s knickers’.