Earth’s first interstellar visitor is neither an alien aircraft nor a comet, as some scientists previously speculated when whizzed through our Solar System in 2017.

A new study from Arizona State University suggests Oumuamua is nothing more than a chunk from a Pluto-like planet that was blasted off from its home some 400 million years ago.

The team also determined that the remnant is not shaped like a cigar, as previously stated, but is flat like a pancake with a surface of frozen nitrogen.

However, Oumuamua may not have ejected as a flat chunk, but melted into the form when it traveled closer to the sun.

Alan Jackson, an astronomer and planetary scientist at Arizona State University, said: ‘Being made of frozen nitrogen also explains the unusual shape of Oumuamua.’

Oumuamua is nothing more than a chunk from a Pluto-like planet that was blasted off from its home some 400 million years ago, a study suggests. The object is also flat like a pancake and not shaped like a cigar as previously speculated

Jackson, along with his colleague Steven Desch, analyzed observations of Oumuamua captured in 2017, allowing them to determine several characteristics in order to determine its makeup.

‘In many ways ‘Oumuamua resembled a comet, but it was peculiar enough in several ways that mystery surrounded its nature, and speculation ran rampant about what it was.’

All of the remnant’s initial observations suggested it was comet, there are some characteristics that have never been observed in one soaring through the solar system – it is 10 times as long as it is wide and extremely flat.

The team combined data on its size, shine and shape, which led them to conclude that Oumuamua is most likely a gradually eroding chunk of icy nitrogen. 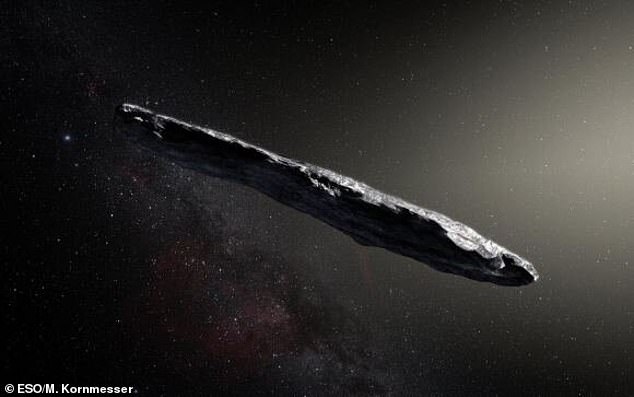 The object is our first interstellar visitor was spotted whizzing through the solar system in 2017, which led to a number of theories – some said it was an alien craft. Pictured is a concept image created from previous observations 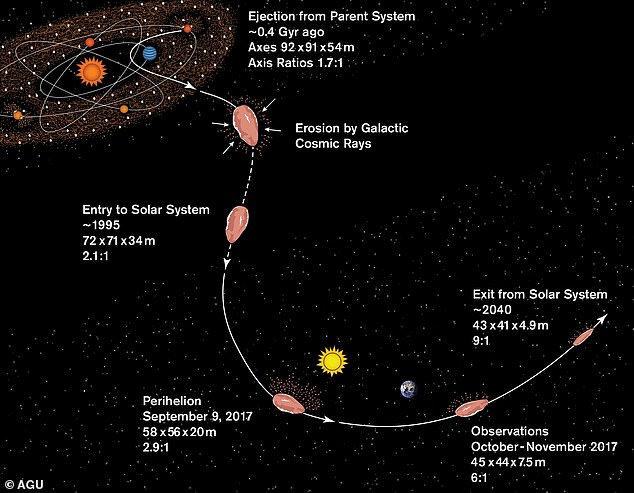 However, Oumuamua may not have ejected as a flat chunk, but melted into the form when it traveled closer to the sun. Scientist say it traveled from a distant solar system into our own

And since solid nitrogen ice has been observed on the surface of Pluto, it is possible Oumuamua’s parent planet was similar.

‘We knew we had hit on the right idea when we completed the calculation for what albedo (how reflective the body is) would make the motion of ‘Oumuamua’ match the observations,’ Jackson said.

‘That value came out as being the same as we observe on the surface of Pluto or Triton, bodies covered in nitrogen ice.’

‘Although Oumuamua’s comet-like nature was quickly recognized, the inability to immediately explain it in detail led to speculation that it is a piece of alien technology.’ 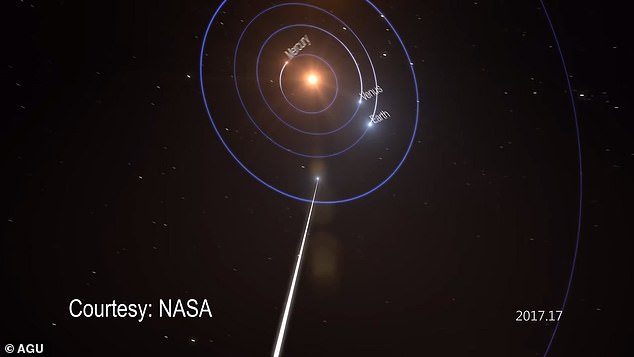 The team analyzed observations of Oumuamua captured in 2017, allowing them to determine several characteristics in order to determine its makeup 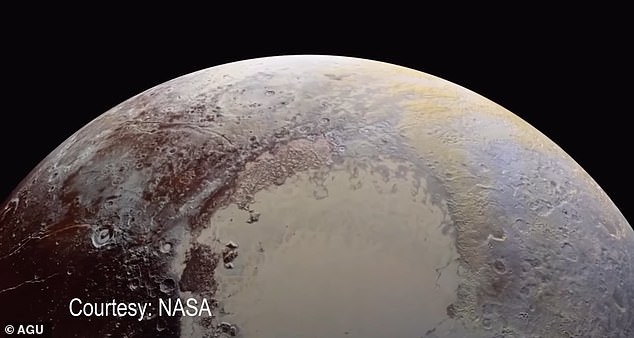 Researchers combined data on its size, shine and shape, which led them to conclude that Oumuamua is most likely a gradually eroding chunk of icy nitrogen. Since solid nitrogen ice can be seen on the surface of Pluto (public), it is possible Oumuamua’s parent planet was similar

‘Everybody is interested in aliens, and it was inevitable that this first object outside the solar system would make people think of aliens,’ Desch said.

‘But it’s important in science not to jump to conclusions. It took two or three years to figure out a natural explanation—a chunk of nitrogen ice—that matches everything we know about Oumuamua.’

That’s not that long in science, and far too soon to say we had exhausted all natural explanations.’

The idea that the object was an alien aircraft came from Harvard physicist Avi Loeb who believes it is a discarded rocket.

Perhaps ‘Oumuamua was like a buoy resting in the expanse of the universe,’ writes Loeb. 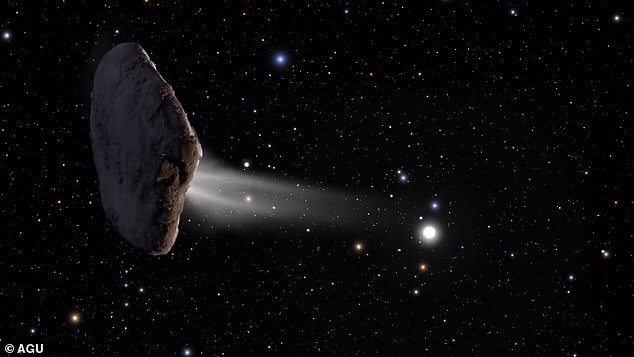 Oumuamua was discovered in October 2017 by a telescope in Hawaii millions of miles away. The red-tinged rock is estimated to be possibly 1,300 feet long and zooming away from the Earth and sun at more than 16 miles per second

Like a trip wire left by an intelligent lifeform, waiting to be triggered by a star system.

Loeb’s ideas have placed him at odds with fellow astronomers.

Writing in Forbes, astrophysicist Ethan Siegel called Loeb a ‘once-respected scientist’ who, having failed to convince his peers of his arguments, had taken to pandering to the public.

Loeb, for his part, protests a ‘culture of bullying’ in the academy that punishes those who question orthodoxy — just as Galileo was punished when he proposed the Earth was not the center of the universe.

AN INTERSTELLAR VISITOR: WHAT IS ‘OUMUAMUA AND WHAT DO WE KNOW ABOUT IT?