Leeuwarden, the main city of northern Holland’s Friesland region, has taken over as European Capital of Culture (jointly with Valletta, Malta).

First impressions are of a mini Amsterdam: cafe -lined canals, stone bridges, tall, gabled houses and families on bikes. It’s as Dutch as a wedge of Edam.

But Leeuwarden has a panache of its own and the city is in the throes of an exciting renewal. It will be a happening place all year, with Frisians showing the world how they are a people apart.

A small-scale charm: Leeuwarden is one of the Netherlands’ less-known cities

Not quite — the spelling is one letter different. But Frisian people are all too aware that black-and-white Friesian cattle are far better known around the world than themselves. Yet you will find they are proud of their distinctive history and culture, and speak a language closer to English than Dutch.

Tsiis (pronounced ‘cheese’) for example, is Frisian for cheese.

That’s a piece of keek (Frisian for cake).

Compact and strollable, nowhere is more than a few minutes’ walk. Explore the old town centre around Wilhelminaplein, the main square. Landmarks include the Oldehove tower, seemingly frozen in the act of collapse. Anything Pisa can do…

Cobbled lanes lead from canals up a trio of gentle hills. At the tops you find splendid old merchants’ houses, such as the childhood home of Rembrandt’s wife Saskia.

Friesland will draw on the significance of water – past, present and future – in a string of aquatically themed artistic, musical and sporting events throughout the year.

It kicks off on the last weekend of January, with an extravaganza of street theatre, songs and dance along the canals. The finale is fireworks set to music in the wintry sky.

Another highlight will be an open-air performance of Verdi’s Aida in July; and in September De Stormruiter, an exuberant theatrical show featuring 100 Friesian horses.

The new Fries Museum opened amid fanfare last year, Mata Hari, The Myth And The Maiden is a special exhibition celebrating a gilded life and tragic death.

Perhaps that is what they mean by the ‘myth’. The maiden was also local lass Margreet Zelle, daughter of a Leeuwarden hat shop owner, born next to one of the canals.

DISH OF THE DAY?

With their abundance of cattle, it is unsurprising that Frisians devour cow’s milk cheeses like there is no tomorrow: hard; soft; rinded with wax; or nagelkaas ‘nail cheese’, the nails being cloves. On the downside (from a bovine viewpoint), the local appetite for beef (steaks, meatballs and hotpots) could shame an Argentine gaucho.

For the hottest table in town, go to jail. Recently opened Proefverlof restaurant (proefverlof.frl) is within the walls of the former Blokhuis prison. Early release can be negotiated on settlement of £60-70 for two. 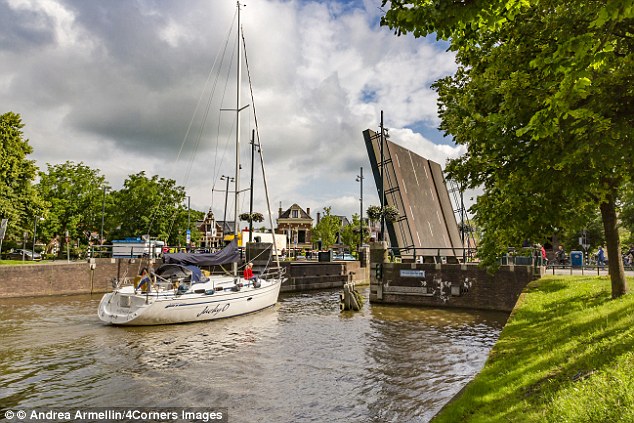 A breezy appeal: The city will have a year in focus in 2018 as a European Capital of Culture

Doubles from £85, including a lavish buffet breakfast.

Technically, Leeuwarden is sharing the Capital of Culture honour with the rest of Friesland.

A cultural ‘Route of all Routes’ connects 11 coastal and inland towns, each with a new fountain themed on a chapter in their cultural story. Cycling is an easy way to tour the flat, green expanses sprinkled with grazing herds of those famous Friesians on their home turf.

Don’t miss the port of Harlingen, where the legendary Dutch boy saved Holland by putting his thumb in a dyke. Over the first week of August, scores of tall ships from around the world will arrive here at the finish of a North Sea race.

HOW DO I GET THERE?