Invasive green crabs are harming New England’s marine ecosystem and in a bid to combat the destruction, a New Hampshire distillery is using the animals to make whiskey.

Tamworth Distilling has developed a bourbon infused with the taste of green crab, which is created by cooking down the crabs into a stock that is then steeped with additional spices.

The result of the Crab Trapper is ‘a briny and better Fireball,’ Steven Grasse, owner of Tamworth Distilling, told Food & Wine’s Mike Pomranz. Each bottle uses about a pound of crabs.

Each bottle, which costs $65, is made with about one-pound of green crabs.

Green crabs came to the US aboard merchant boats from Europe about 200 years ago and have since spread across the eastern US, with a large population located along New England.

These animals feast on the native marine life, eating large amounts of shellfish a day and they also destroy seagrass.

Female green crabs can produce more than 175,000 eggs over a lifetime, making it possible for the species to quickly overwhelm habitats wherever they are.

And over the past few years the population has dramatically increased due to oceans warming. 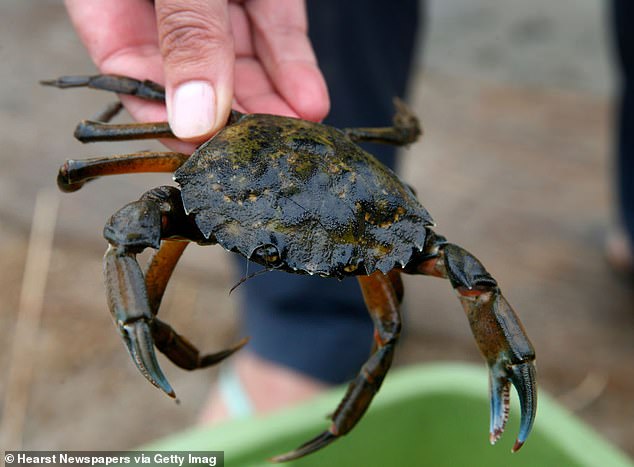 Each bottle, which costs $65, is made with about one-pound of green crabs. Green crabs came to the US aboard merchant boats from Europe about 200 years ago and have since spread across the eastern US, with a large population located along New England

Gabriela Bradt, a marine biologist and fisheries specialist at the University of New Hampshire, told NPR: ‘They are probably one of the most successful invasive species that we have in North America, at least in the marine world.

‘They can eat about 40 mussels a day, just one crab. And so you multiply that by a bazillion, and you have no more clams.’

The stock goes into a giant vacuum still that holds about 20 liters of liquids and stands more than six feet tall.

This type of distillation is performed at a pressure lower than atmospheric pressure.

Once distilled, spies like paprika, dill and cinnamon are added, and then everything is mixed with a bourbon base. 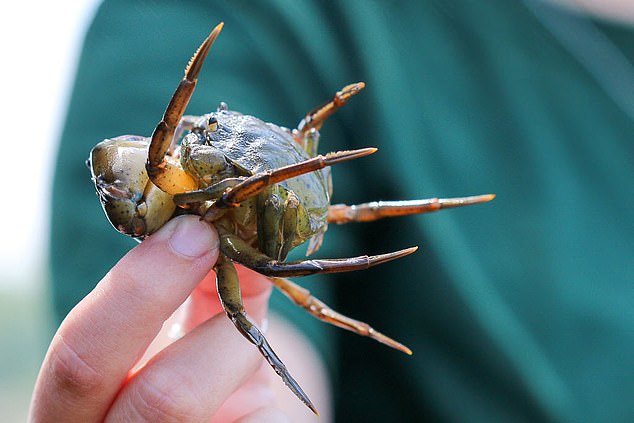 Green crabs feast on the native marine life, eating large amounts of shellfish a day and they also destroy seagrass

‘The crab is present lightly on the nose, accompanied by coriander and bay to smooth out any high notes,’ reads the description of Crab Trapper on Tamworth Distilling’s website.

‘The body carries hints of the maple and vanilla oak notes lent from the full-bodied base. The spirit finishes with heavier notes of clove, cinnamon, and allspice, leaving a light, pleasant spice on the palate.’

Scientists in Canada are also working on new ways to combat the growing green crab population and have engineered a plastic using the animal’s shell.

The project was developed by Audrey Moores, a chemist at McGill University, in partnership with Kejimkujik National Park Seaside in Nova Scotia, which has struggled with a population of the invasive European green crab since the 1980s.

Moores’ small team will harvest green crabs from the park and process their shells to extract a chemical called chitin.

Chitin can be used to create an eco-friendly form of plastic that will break down in landfills and ocean without any lingering toxic effects.

‘If we can make this invasive species come full circle as a solution to the plastic pollution issue that all the oceans are facing today, I really think that’s going to be such a great and innovative way to figure out the invasive species problem,’ Moores told the CBC.

Moores devised a new and less toxic way to process chitin that involves pulverizing the crabs shells and mixing them with a special powder.

Moores says the plastic produced through this process is hard, like glass, and the team is working to produce a softer substance that can be molded into items like plastic party cups, plates, and cutlery.

‘What we know is that if we take regular crab shells, shrimp shells, lobster shells, we have very good results, so we’re fairly confident that the green crab should not be different,’ she said.