Several children died after heart surgery at one of the country’s top hospitals, leading doctors to declare that they wouldn’t even send their own kids there for surgery.

In a months-long investigation, The New York Times found death rates in the pediatric cardiac unit of the University of North Carolina Children’s Hospital was about five percent, higher than the two-to-three percent average of most hospitals in the country.

At least four deaths were confirmed in just a three-month period alone.

Secret audio recordings obtained by The Times showed that several physicians questioned the care that patients were receiving.

One cardiologist said he wouldn’t send his own children for surgery at the hospital while the chief of cardiology said the heart surgery program was ‘in crisis’.

UNC Health does not provide its mortality data to the public website of The Society of Thoracic Surgeons.

But in raw data shared with The Times, the hospital had higher death rates than almost all of the other hospitals, 82 in total, that do share their data.

The Times reported that children were experiencing complications following low-risk procedures and deaths after high-risk surgeries.

Between March and May 2016, at least two infants died following their respective operations.

And a two-year-old girl’s parents were told she should recover well from her surgery, only to be put on life support later that night.

So, in June 2016, the nine pediatric cardiologists who worked at the hospital at the time met with top administrative staff to discuss these cases.

An unknown source secretly recorded this meeting, and that recording was obtained by The Times.

Dr Timothy Hoffman, the chief of pediatric cardiology, told his colleagues in one of the recordings: ‘It’s a nightmare right now. We are in crisis, and everyone is aware of that.’

In another recording, cardiologist Dr Blair Robinson said that he wouldn’t send his own children to UNC for care.

‘I ask myself: “Would I have my children have surgery here?”‘ Dr Robinson is heard telling the other doctors.

‘In the past, I’d always felt like the answer was “yes” for something simple…But now, when I look myself in the mirror, and what’s gone on the past month, I can’t say that.’ 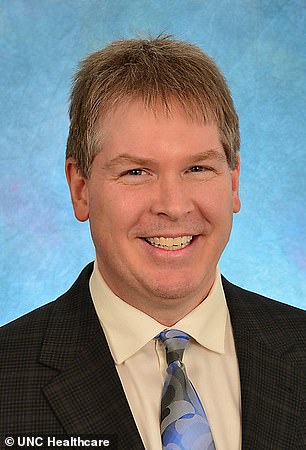 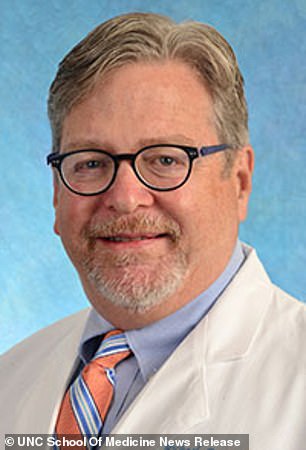 In secret recordings, Dr Timothy Hoffman, the chief of pediatric cardiology (left), called it a ‘crisis’. Cardiologists expressed concerns in the recordings about then-head surgeon Dr Michael Mill (right) after he failed to come in to perform a transplant surgery when a donor heart became available

According to The Times, several meetings were held in 2016 and 2017 during which physicians expressed their concerns and worries about the complications and deaths.

But hospital administrators brushed these concerns aside.

Dr Kevin Kelly, the head of Children’s Hospital, is heard telling the cardiologists in one recording that performing fewer surgeries could lead to job cuts.

UNC Health Care told the newspaper that, in 2016, there were employees that caused ‘team culture issues’ but that the team at the hospital is different today.

In the secretly recorded meetings, cardiologists said they could point to a few examples of why their patients were doing so poorly after surgery.

One reason was that two pediatric cardiac intensivists, which treat children with complex congenital and acquired heart defects, had left UNC in 2015.

The hospital also didn’t have a cardiac intensive care unit, which is an ICU that focuses on diseases and surgeries related to the heart.

Worries were also expressed about Dr Michael Mill, who was the chief surgeon at the time.

The Times revealed that a few weeks before the meeting, Dr Mill had not gone to the hospital on a weekend to perform a transplant surgery on a baby when a donor heart became available. 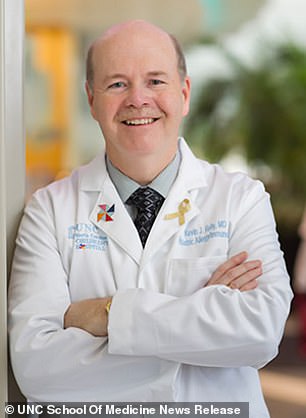 Dr Kevin Kelly, the head of Children’s Hospital (pictured), is heard telling the cardiologists in one recording that performing fewer surgeries could lead to job cuts

The baby eventually received another heart at Duke Children’s Hospital, also in North Carolina, but physicians at UNC were ‘horrified’.

‘As a physician, I mean, we all took the [Hippocratic] oath,’ Dr Jennifer Whitman, a cardiologist, said in one of the recordings.

‘We are supposed to do what’s right for our patients…This is what you signed up for. And who is he to play God with some kid’s life? I can’t get past this. This is beyond horrifying.’

UNC told the Times that Dr Mill is currently taking a leave from the hospital for family medical reasons.

This is not the first heart surgery program to come under fire for questionable practices.

In 2018, the Tampa Bay Times reported that Johns Hopkins All Children’s Hospital in Florida had experienced a death rate among pediatric heart surgery patients that had tripled.

The team stopped performing surgeries in the aftermath of the investigation.

North Carolina’s Division of Health Services Regulation, part of the state’s Department of Health and Human Services, has launched an investigation into UNC Children’s Hospital.

Meanwhile, The Times is suing UNC to obtain risk-adjusted mortality data to confirm other deaths.

The hospital insists its program is ‘very strong’ and criticized the newspaper’s report.

‘We are proud of our pediatric congenital heart surgery program, and our current team is receiving top results that would place us among the best in the nation,’ UNC Health wrote in a statement in part.

‘We have been engaged in continuous quality improvement efforts for decades and have made significant improvements in the past 10+ years.

‘To characterize today’s program as anything but strong, would not only be misleading, but not factual. To say we ignored issues would also be false.’