Investigators today removed an ejector seat from the Red Arrow jet which came down in a horror crash that killed a Royal Air Force engineer on board.

The Defence Accident Investigation Board will look into whether a bird strike, engine failure or something else caused the fatal crash at RAF Valley in North Wales.

The pilot, who is thought to be Flight Lieutenant David Stark, ejected safely in the incident on Anglesey at about 1.30pm yesterday and is being treated in hospital. 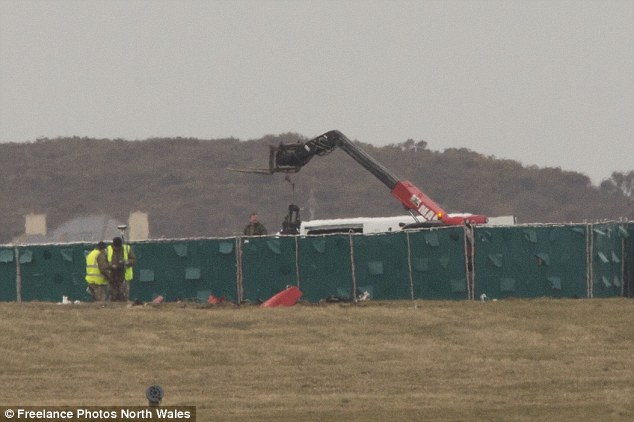 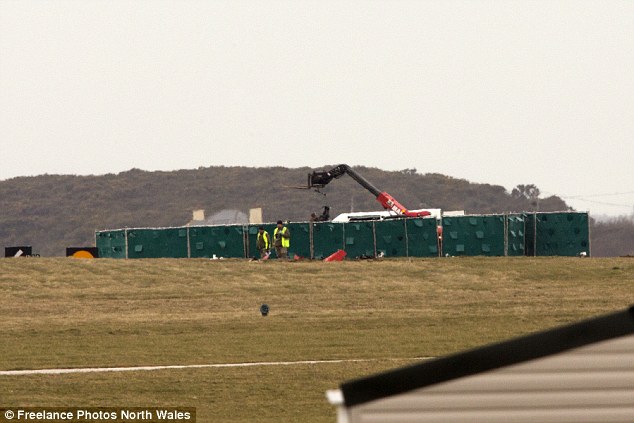 Witnesses today described as a ‘heavy police presence’ at the base after a 5ft-high green tarpaulin fence was put up overnight around the aircraft wreckage.

RAF Valley is said to have been closed to all air traffic until next Monday after the crash, which happened when the Hawk appeared to be heading back to the runway.

Investigators, who were pictured taking away the ejector seat with a crane today, will also be looking into why only one of the two crew members ejected to safety.

It comes after ejector seat manufacturer Martin-Baker Aircraft was last month fined £1.1million after a health and safety law breach led to the death of a Red Arrows pilot.

Flight Lieutenant Sean Cunningham was killed in November 2011 after being ejected from his Hawk T1 aircraft on the ground at RAF Scampton in Lincolnshire.

The parachute on the Mark 10B ejector seat did not deploy at the time and the 35-year-old South African-born airman fell 200ft before he later died in hospital. 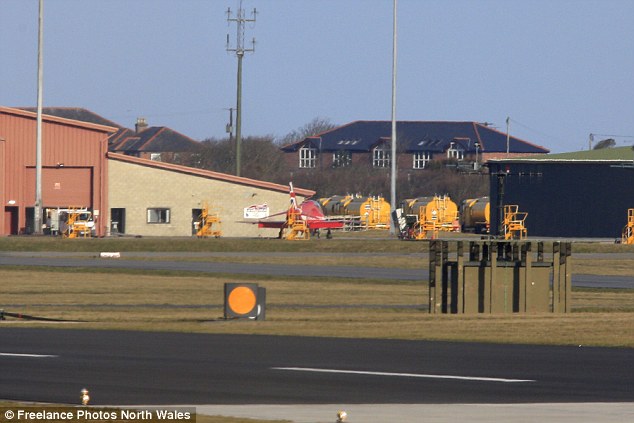 Another Red Arrow, T1, is pictured parked outside the Hawk sheds at RAF Valley this morning 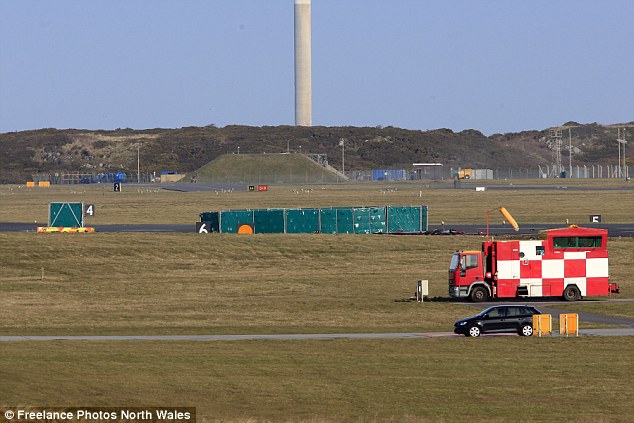 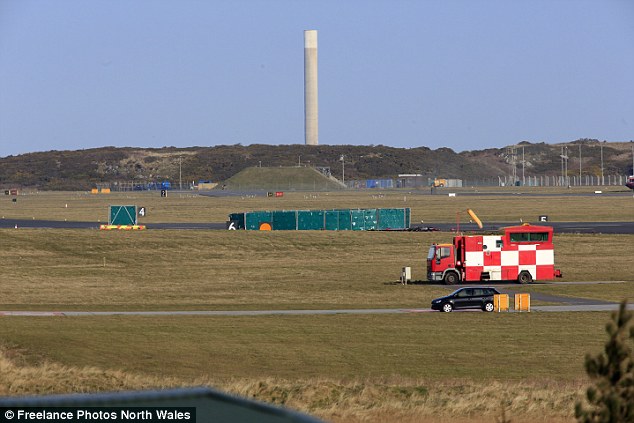 Today, at the House of Commons, Prime Minister Theresa May and Labour leader Jeremy Corbyn paid tribute to the as-yet unnamed engineer who died yesterday.

The PM said: ‘I’m sure the whole House will also wish to join me in expressing our sincere condolences to the family and friends of the Red Arrows engineer who tragically died in the aircraft incident at RAF Valley yesterday.’

And Mr Corbyn joined Mrs May in sending condolences during Prime Minister’s Questions in Westminster, adding: ‘We wish the pilot well in his recovery.’

The RAF has urged witnesses to provide any photographs or footage they took of the crash, tweeting: ‘Any images may help with an investigation.’ 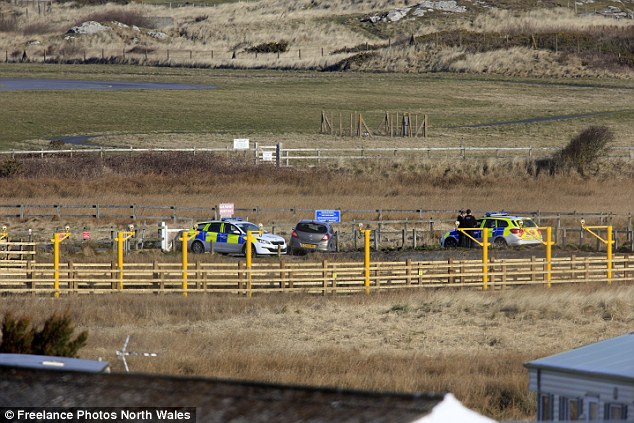 North Wales Police has a heavy presence at the base, stopping anyone getting near the fence 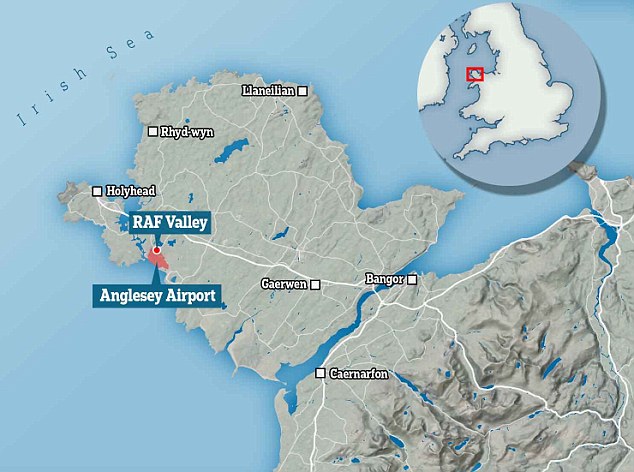 Flight Lieutenant Stark was born in Geneva, Switzerland, before moving to Britain and being educated at Nottingham High School. He joined the RAF in 2005. 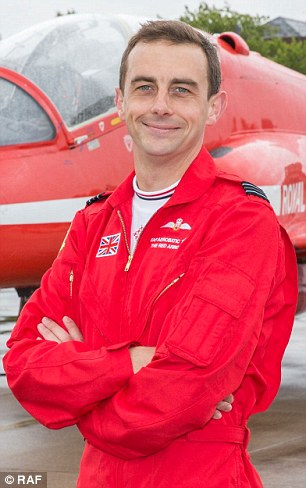 The pilot, thought to be Flight Lieutenant David Stark, ejected safely from the jet

Speaking last November, he said: ‘It will be an incredible challenge but I can’t wait to earn the honour of wearing the red flying suit with everything that it represents. The Red Arrows reflect the excellence of the UK Armed Forces and the nation as a whole.

‘Core values such as determination, professionalism, teamwork and innovation are vital to the delivery of the flying displays and can be found in every member of team, from engineers to aircrew. I’m very proud to be in a position to fly for the team and help to highlight such fundamental UK values.’

The dead airman, who could be named this afternoon, was one of a team of engineers, known as The Blues, each assigned to a Red Arrows pilot.

They are responsible for servicing the Hawk aircraft before each display, and during transit flights they travel in the back seat of their pilot’s jet.

It is understood that yesterday’s crash took place as the aircraft was travelling from Wales to RAF Scampton in Lincolnshire, where the Red Arrows are normally based. 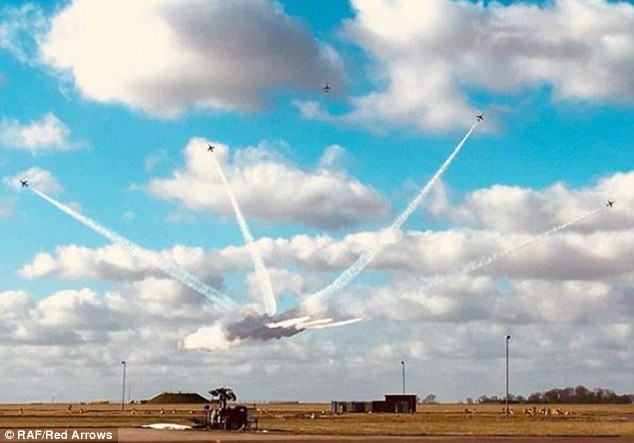 The RAF posted this picture on Instagram yesterday of the formation split, with Reds 1-5 above and Reds 6-9 below, marking the end of the first half of the 2018 show at RAF Scampton 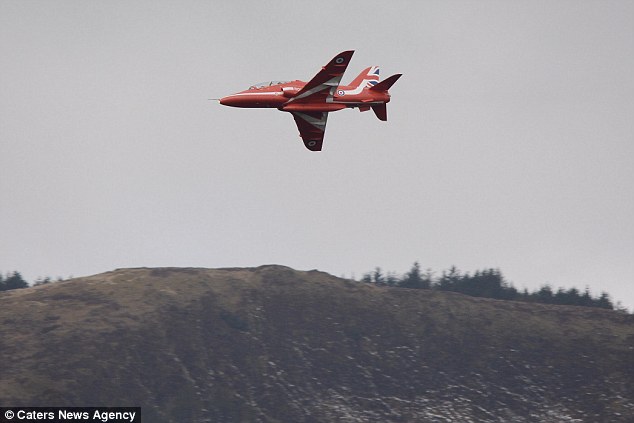 A plane believed to be Red 3 is pictured flying earlier yesterday, before the crash in Wales 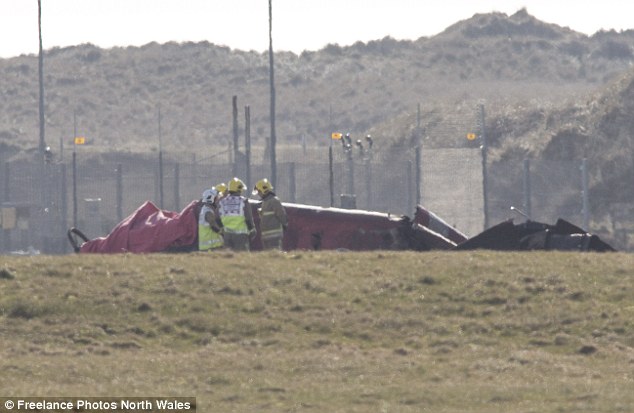 The jet crashed at 1.30pm soon after take-off from RAF Valley, where Prince William served as a search-and-rescue helicopter pilot from 2010 to 2013.

Witnesses said the Hawk appeared to be heading back to the runway when the pilot ejected and the plane crashed.

Sian Williams, an 18-year-old student, said: ‘It did a loop and flew towards the runway and looked like it was about to land. I saw the parachute of one pilot open and then the plane hit the runway with a bang and a crumbling noise.

‘Then it just burned bright orange and there was smoke everywhere.’

She said the RAF Valley fire crew arrived quickly and put the blaze out before an air ambulance arrived. 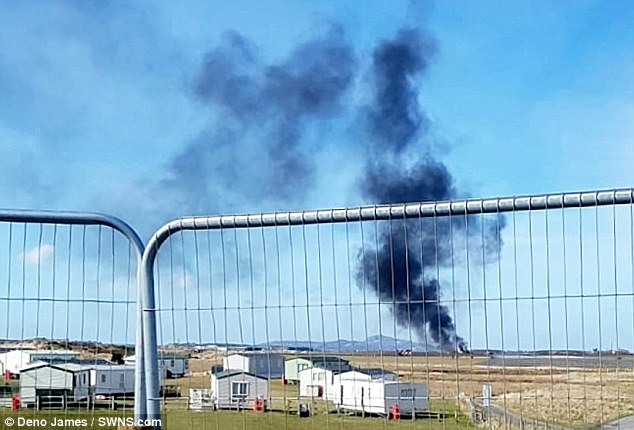 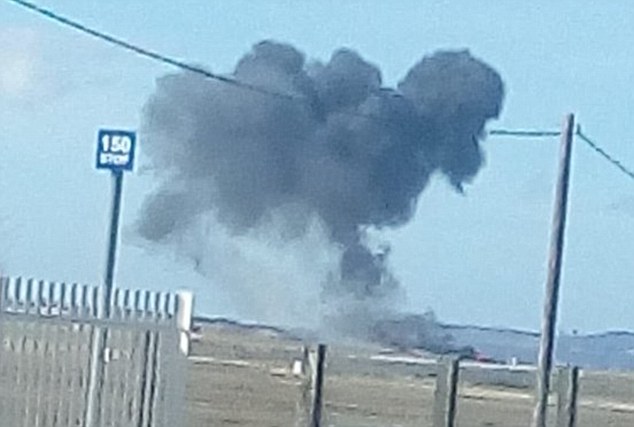 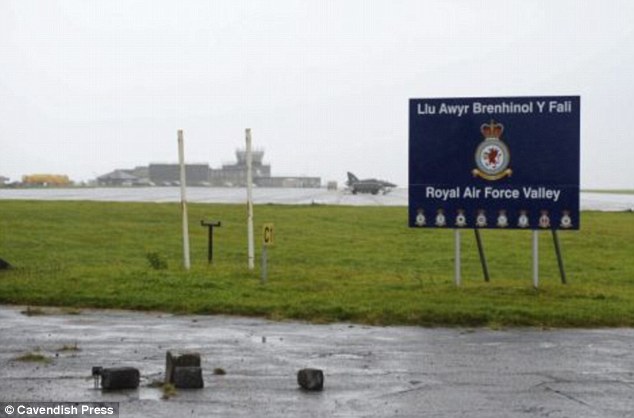 He added: ‘I could clearly see there was an aeroplane on fire on the runway.’ Howard Rigby, who was playing golf nearby, said: ‘I could see a ball of flame and a parachute.’

Known by the call sign Red 3, the 35-year-old was born in Geneva, Switzerland, before moving to the UK. He joined the RAF in 2005. Red Arrows spokesman Group Captain Nick Tucker-Lowe said: ‘It is with great sadness that the RAF can confirm the death of an engineer from the RAF Aerobatics Team.

‘The engineer’s family have been informed. The pilot survived and is receiving medical treatment.’

The tragedy is the first major accident to hit the display team since 2011, when two pilots died in separate incidents. It brings the total number of Red Arrows personnel killed in operational incidents to 11 since 1965, when the team was set up.

Joining the Red Arrows is the pinnacle of many a pilot’s career – but the job also carries high risks.

Yesterday’s horrific crash was the first major incident since 2011, when two members died.

Flight Lieutenant Sean Cunningham, 35, was killed at RAF Scampton, Lincolnshire, after being accidentally ejected from his Hawk T1 while he conducted pre-flight safety checks as his plane was on the ground. 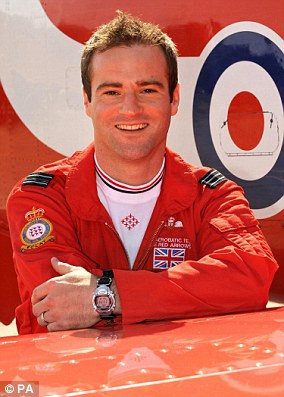 The South-African officer, who grew up in Coventry, was thrown 300ft and his parachute failed to deploy during the incident on November 8, 2011.

An inquest heard he was ejected because of a problem with the ejection seat firing handle, which had been pulled into an unsafe position by accident.

An inquest heard he may have succumbed to G-force impairment before attempting to correct his course in the moments before the impact.

An earlier service inquiry, led by Wing Commander Mark Rodden, concluded the crash was ‘most likely’ caused by ‘A-loc’ – where G-force caused an almost total loss of consciousness due to G-force.

Prior to yesterday, there have been 15 other reported crashes involving Red Arrows since 1969, which have involved 10 fatalities.

The first death, in 1969, involved a pilot flying into trees while practising.

The aircraft which crashed yesterday is a BAE Hawk TA1. The two-seat training aircraft replaced the Folland Gnat in 1979.

It has a modified engine and uses diesel mixed with dye to produce red, white or blue smoke.