Investors in Barclays can bank on a dividend:  Lender revives payouts

Investors in Barclays can bank on a dividend: Lender revives payouts as boss Jes Staley looks to a big coronavirus recovery

Barclays became the first major British bank to resume its dividend as the lender’s bosses predicted ‘quite a strong’ economic recovery.

In a boost for shareholders and pension pots, the bank said it would pay investors 1p per share for 2020, as well as announcing a £700million share buyback.

The return of the dividend came despite Barclays setting aside £4.8billion to cover bad loans, and warning more branch closures are on the horizon.

Barclays chief executive Jes Staley picked up a bonus of £1.4m but his total pay fell to £4m from £5.9m a year earlier

But while the UK’s economic downturn has prompted caution among major lenders, Barclays’ investment bank has been raking in money as it seeks to take advantage of increased market volatility.

The bank’s bonus pool was up 6 per cent to £1.6billion, but top staff in Barclays International – which includes the investment bank – scooped a much larger percentage of that rise.

Chief executive Jes Staley picked up a bonus of £1.4million but his total pay fell to £4million from £5.9million a year earlier.

Pre-tax profits at the whole of Barclays for 2020 fell to £3.1billion from £4.4billion a year earlier, hampered by the £4.8billion provision for loans which it thinks customers may become unable to repay. 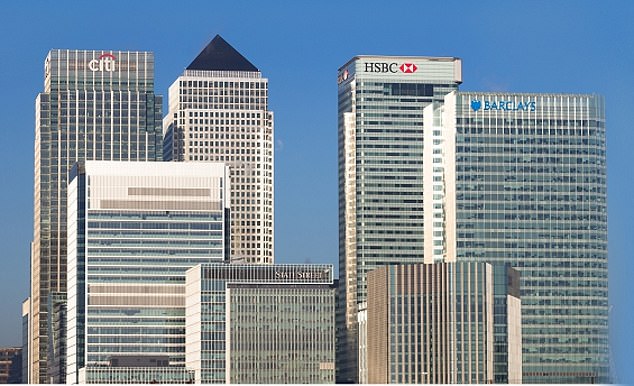 While the economic slump has prompted caution among major lenders, Barclays’ investment bank has been raking in money as it seeks to take advantage of increased market volatility

But at the investment bank, profits were up 35 per cent to £4billion – a relief for Staley, who had insisted on keeping the division, under pressure from activist investor Ed Bramson to sell it off.

Staley said that due to the better-than-expected performance, he felt comfortable resuming the dividend and launching the share buyback as another way to return cash to investors.

Regulators at the Bank of England have only recently lifted the ban on dividends, which they imposed last year because of fears banks would focus more on shareholder payouts than supporting the economy through the pandemic.

But despite the pain caused by coronavirus, Staley was bullish about the year ahead. 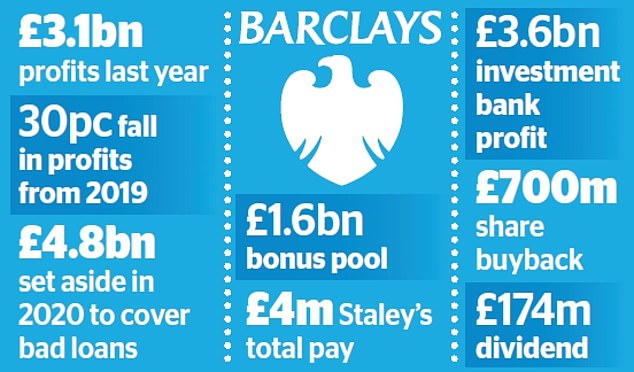 He said: ‘I do think that when you and I can go back to a restaurant or a shop, spending will recover quite robustly.

‘Once we are out of the pandemic and confidence returns, people will spend. I expect quite a strong recovery.’

Staley, 64, added that Barclays wanted to invest and expand to make sure it was ready for the ‘new dawn’ once the pandemic was over.

However, he said coronavirus had pushed even more people towards internet banking, which would mean more branch closures.

Staley said: ‘At the margins, you’ll see our number of branches decline but it’ll be where there’s absolute economic rationale for it and understanding by our customers.’ The number of Barclays branches fell by 104 to 859 last year.

Shares in Barclays slid 4.4 per cent, or 6.86p, to 147.5p, as it seemed investors were hoping for a larger payout. Their disappointment may have been compounded by Staley’s generous pay packet.

Towards the start of the pandemic, he had suggested that Barclays may look to cut down its office space, as staff adjusted to working from home.

But he said yesterday the bank would maintain a ‘significant’ presence in London’s Canary Wharf, adding: ‘No one has a crystal ball as to how this will all unfold, but right now there is no plan on our part to make a major real estate move.’