A tiny incubator which nurtures developing embryos inside a woman’s body may prove an alternative to traditional IVF.

The INVOcell mini-incubator, which is the size of a champagne cork, is as effective as conventional IVF and can make fertility treatment cheaper and faster because fewer drugs and less monitoring are needed.

It could be approved for use in UK private clinics as early as next year, according to the manufacturer — and by the NHS soon after, potentially giving thousands more women the chance to become mothers.

The clear plastic chamber with developing embryos in it, is placed inside the woman’s body. This more closely replicates the conditions of natural conception in the womb, maximising the chance of a successful embryo that will implant and develop into a healthy baby.

In a study published in the Journal of Reproduction and Genetics, women who had the INVOcell treatment were just as likely to give birth as those who underwent traditional IVF, where an egg is fertilised in a test tube or dish and the embryo placed briefly in a laboratory incubator to grow.

About 50,000 women have IVF each year in Britain. But it is being increasingly rationed across the NHS, despite official guidance from NICE recommending that all under-40s should be entitled to three cycles of IVF if they need it.

However, this is not mandatory and just 12 per cent of clinical commissioning groups in England offer three cycles. 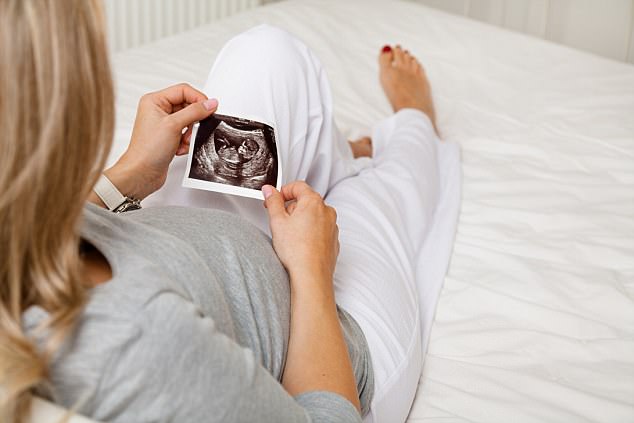 In a study published in the Journal of Reproduction and Genetics, women who had the INVOcell treatment were just as likely to give birth as those who underwent traditional IVF

Private clinics charge up to £15,000 a cycle — and it takes an average of three treatment cycles for a successful pregnancy.

INVOcell costs about £5,000 per cycle, so the main advantage is a lower cost for the same chance of pregnancy. The process is also shorter than traditional IVF, as less medication is given to a woman to prepare her body for the pregnancy.

With conventional IVF, she first undergoes a month of daily injections of high-dose drugs to jump-start her ovaries to produce more eggs that can be extracted for fertilisation. On average, 15 eggs are collected and mixed with sperm for fertilisation.

With INVOcell, researchers say they need to extract only six to eight eggs, so women can have lower doses of the drugs and the process is shorter, completed in about three clinic visits compared with ten for conventional IVF.

With IVF, once extracted, the eggs are injected with sperm in a laboratory and left for 18 hours to be fertilised.

They are then checked by a specialist and the embryos deemed successful are transferred to a special incubator that mimics the conditions of the fallopian tube, where fertilisation normally takes place inside the woman’s reproductive tract.

This requires careful monitoring to ensure the balance of gases is correct and the desired temperature, pH level and nutrients are maintained for embryo growth. Successful embryos will then go through a further stage of development in the laboratory as they form more cells and specialised structures, until they reach what is known as the blastocyst stage.

After two days they are checked again and the healthiest ones are implanted into a woman’s uterus.

With the new technique, healthy eggs are placed with sperm inside the INVOcell device — to get the best fertilisation rate, doctors mix one egg with 30,000 sperm cells.

The device is then put back into the woman’s vagina and into the cervix, much like a tampon, for fertilisation to occur in her body. There, the manufacturer says the temperature, pH balance and mix of carbon dioxide and oxygen replicate the usual environment for conception, so there is no need for checks to regulate these.

The developing embryos don’t undergo the checks done in traditional IVF, though, so there is a theoretical risk that abnormal embryos won’t be detected early and won’t implant successfully.

After three to five days, the INVOcell incubator is removed by a doctor and the best embryos — those that have reached blastocyst stage — are transferred to the womb, as with traditional IVF.

Recently, a trial at the Centre for Associated Reproduction, in Texas, found that women who had the INVOcell treatment were just as likely as those undergoing traditional IVF to have a successful pregnancy and a live baby.

Professor Geeta Nargund, medical director at Create Fertility, says: ‘I would support any easier method, new technology or device that would help to reduce the cost of IVF and increase accessibility, as long as they meet our regulatory standards.’

However, she cautioned that abnormal embryos may not always be detected with INVOcell.

The company is awaiting review for the device to be approved for sale in the UK. This is expected early next year.