Children who play on iPads experience a ‘fight or flight’ chemical reaction in their bodies which makes them hyped up, psychologists have warned.

Scientists said that the ‘imaginary fear’ experienced by children when they play games on digital devices makes the body react like it would to physical fear, meaning ‘energy is sent to the muscles’.

They said the reaction is similar to the body preparing to ‘run away from a lion’, including increased blood flow to the legs, but rather than expend this energy children will stay ‘sitting on the sofa’.

Scientists said that the ‘imaginary fear’ experienced by children when they play games on digital devices makes the body react like it would to physical fear, meaning ‘energy is sent to the muscles’

Dr Sam Wass, said: ‘We evolved on the prairie, and when a lion jumped out at you our body goes into this very set set of responses, our heart starts beating faster, we start to sweat, our digestion shuts down, that is all to get as much energy to the muscles so we can run away.

‘We have actually got a paper out at the moment showing that when a child is playing an iPad game their body is reacting to imagined danger as if it is real danger. So the same set of responses kick in.

‘And even though they are not actually in physical danger, the body doesn’t know the difference. So it gives the same reaction to the imagined danger.’

Dr Wass, who has written a research paper on the issue, added: ‘What is happening in the body certainly for an iPad is all sorts of chemical reactions to maximise the flow of blood to the legs and energy to the muscles, so you have all this energy.’ 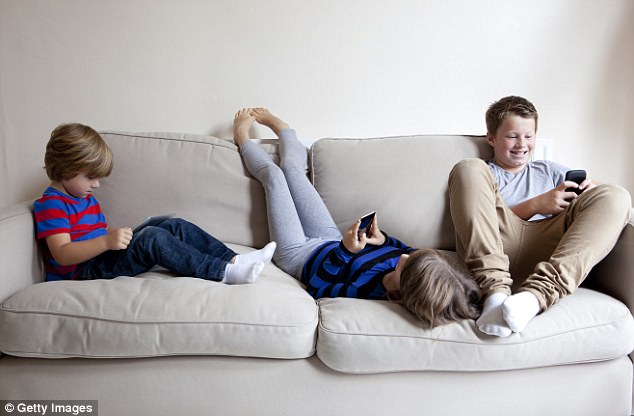 They said the reaction is similar to the body preparing to ‘run away from a lion’, including increased blood flow to the legs, but rather than expend this energy children will stay ‘sitting on the sofa’

Speaking on the set of Channel 4 show The Secret Life of 4 and 5 Year Olds, [MUST KEEP], which returns next month, she said: ‘Anecdotally a lot of people who report to me, and I have not done any research on this, is that when the children come off the iPad, if they’ve been on for a prolonged period of time, or a computer, or sat doing their homework, where they’ve had to really concentrate and they’ve found it hard, you will get slightly irritable behaviours afterwards, and struggling to settle.’

Meanwhile, Dr Elizabeth Kilbey, who is also on the series, raised concerns about the use of digital devices being ‘very solo’, which she said means that children are learning to lose individually but not publicly.

She said: ‘What is the digital era doing to our children’s experience of competition with others.

‘Digital work is very solo, and as a psychologist I don’t have an issue with digital time per se, I have a problem with it competing with other aspects of development…development at this age is about communication, interaction, sharing.

‘Having your boundaries and limits tested by someone else is really important to help you learn to stand up for what you genuinely think is important but also take the rough edges off when you need to learn to cooperate a bit more. It is socialising and shaping.

‘If you have got a lot of individual iPad or digital device time, then my worry is you are not getting enough of that. That is a concern for me…

‘With all the digital devices, there is an element of competition – there’s racing games, or you’ve got to beat the zombies – but is that equipping children to cope with group competition?

‘Because there is something very different about failing publicly, and all the feelings of shame and humiliation that children can feel from losing a race or not winning, versus crashing your car on an iPad and no one seeing it. It is not a public encounter.

‘I believe, in the right way, that experiences of relating to the group, both positive and negative, teaches something very important. I think it is really important we don’t lose this from the curriculum.

‘I slightly worry that the individual, ‘me versus myself’ tech generation might be getting slightly less of this [group competition] than previous generations might have done.’

A report released earlier this month by Common Sense Media showed that children aged 8 and below spend an average of 2 hours and 19 minutes a day with screen media.