Iran has accused Donald Trump’s national security adviser John Bolton of attempting to drag the UK into a ‘quagmire’ over the Gulf crisis.

The Middle Eastern nation’s foreign minister Javad Zarif tweeted on Sunday said that the US politician was ‘turning his venom’ on Britain in an attempt to start the ‘War of the Century’.

‘Make no mistake: Having failed to lure @realDonaldTrump into War of the Century, and fearing collapse of his #B_Team, @AmbJohnBolton is turning his venom against the UK in hopes of dragging it into a quagmire,’ Zarif tweeted. 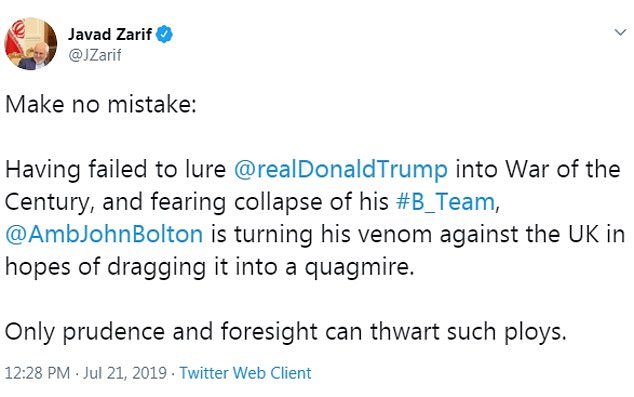 ‘Only prudence and foresight can thwart such ploys.’

Britain and Iran have been at loggerheads since the Royal Navy seized an Iranian vessel, which is currently being held in Gibraltar.

Iran retaliated this week by taking a British oil tanker and its crew into custody near the Strait of Hormuz in the Gulf.

Defence Minister Tobias Ellwood was today forced to deny that the UK had taken its ‘eye off the ball’ and said the Government was looking at a ‘series of options’ after Iranian forces seized the UK-flagged tanker.

Questions have been raised as to why British-flagged vessels were not being escorted through the area, following threats from Tehran after an Iranian ship was impounded in Gibraltar last week. 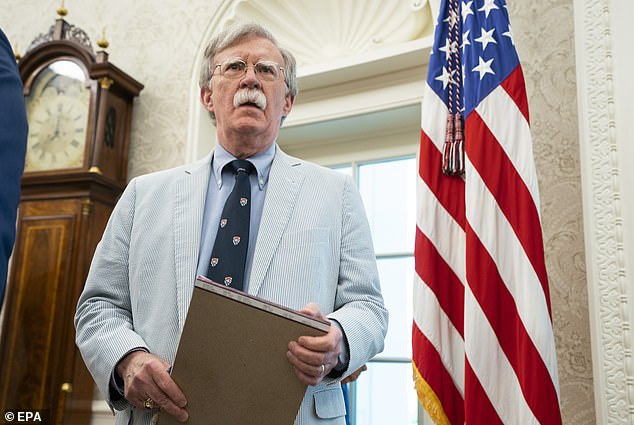 Appearing on Sky’s Sophy Ridge on Sunday this morning Mr Ellwood said the UK had three or four warships going through 100 nautical miles of waterway every day, adding: ‘It is impossible simply to escort each individual vessel.’

Former Tory party leader Iain Duncan Smith claimed this morning that the UK had turned down an offer of US military help to protect vessels.

‘I think there are genuine questions to be raised right now about the British Government’s behaviour, I say this as a supporter of the Government,’ he told the Andrew Marr Show.

‘They were not taken up at the point and I want to know why, with only one ship as it appears there, and no accelerated attempt at assets.

‘This is a major failure and the Government has to answer that charge very quickly indeed.’ 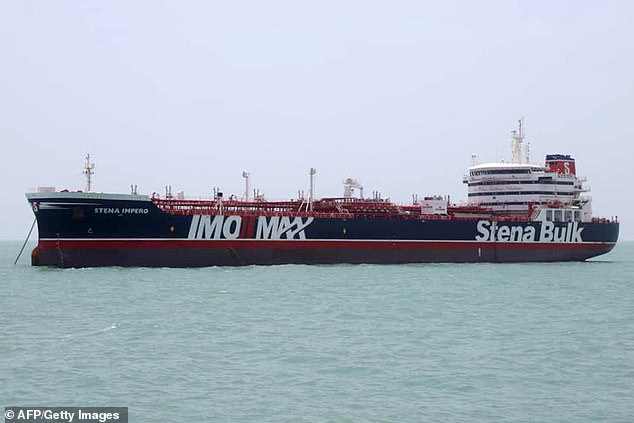 An image released by the Iran Students News Agency (ISNA), which is partially funded by the country’s Government, claims to show the seized British tanker Stena Impero anchored in southern Iran