Iran blocked a German football broadcast on Friday last week because the referee was a woman.

Iranian state broadcaster IRIB censored a match between Bayern Munich and Ausburg in the Bundesliga because German referee Bibiana Steinhaus was officiating.

According to Deutsche Welle, the broadcast was stopped because of the country’s strict Islamic laws which do not allow images of women wearing shorts to be shown on TV.

Natalie Amiri, Iran correspondent for German public broadcaster ARD, tweeted: ‘Cancelled at the last minute! And who is to blame: Bibi again, of course. Bibiana Steinhaus is a woman and wears shorts.

‘Something like that should not be seen on Iranian state television.’

The incident is not the first time Iran has refused to show an international football match because of Steinhaus.

In May last year the state broadcaster censored a match featuring the referee, with random shots of spectators shown every time the cameras focused on her.

Steinhaus, 39, is the first woman to have officiated at men’s football matches at a professional level in Germany. She refereed her first Bundesliga match in September 2017.

She was named as one of Germany’s top referees in 2018. 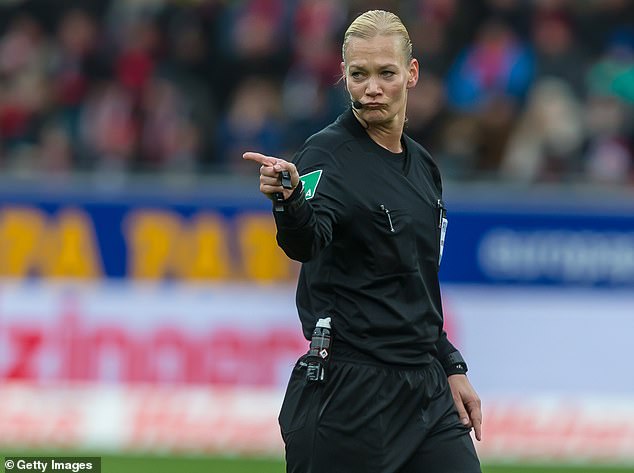 Steinhaus, 39, is the first woman to have officiated at men’s football matches at a professional level in Germany