Iran could be secretly spying on millions of users in the US, UK and around the world who have downloaded covertly state-sponsored applications on Apple and Google’s app stores.

That’s according to a new report from the National Council of Resistance of Iran (NCRI), a political group that opposes the Iranian regime, published on Thursday.

The report claims that the Islamic Revolutionary Guard Corps (IRGC) has created spyware-enabled apps for ‘cyber-surveillance and repression’ that are available on the App Store, the Google Play Store and GitHub with the goal of ‘monitoring and preventing’ new political uprisings.

Specifically, it calls out Mobogram, an instant messenger app available on the App Store and the Google Play Store, as a ‘weaponized’ application developed and monitored by the Iranian regime.

A new report from the National Council of Resistance of Iran claims that the Iranian regime has created apps enabled with spyware to ‘monitor and counter the expansion’ of uprisings. Stock image

Mail Online has reached out to Apple and Google for comment.

‘The IRGC has weaponized western cyber technology to target its own people as the population is engaged in the uprising to free the country,’ said Alireza Jafarzadeh, the deputy director of the NCRI’s Washington office, in a statement to Mail Online.

‘The Iranian regime is currently hard at work to test the success of these apps on the people of Iran first.’

‘If not confronted, its next victims will be the people of other nations,’ he added.

Mobogram is ranked 156th on Apple’s App Store charts for ‘Social Networking Apps’ in the US, according to analytics company App Annie.

Mobogram is an ‘unofficial Telegram fork,’ or an application that’s created based on another application’s software, NCRI noted.

But Pavel Durov, who founded the Russian end-to-end encryption messenger Telegram, has warned users to stay away from Mobogram, saying it may be insecure.

Mobogram is an outdated and potentially insecure fork of Telegram from Iran. I don’t advise to use it.

Smartphone users in Iran have turned to apps like Mobogram after Telegram was temporarily blocked inside the country during anti-establishment protests last December.

Telegram has about 40 million monthly users in the country out of Iran’s roughly 45 million overall online users, according to Politico. 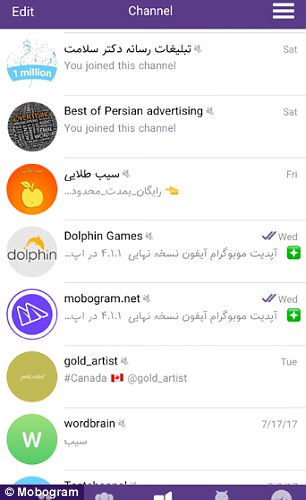 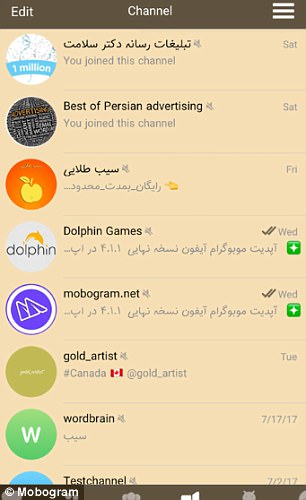 Pictured are screenshots of Mobogram, which touts itself as the ‘best unofficial Telegram app’ that lets users send messages and upload files, while claiming to have end-to-end encryption 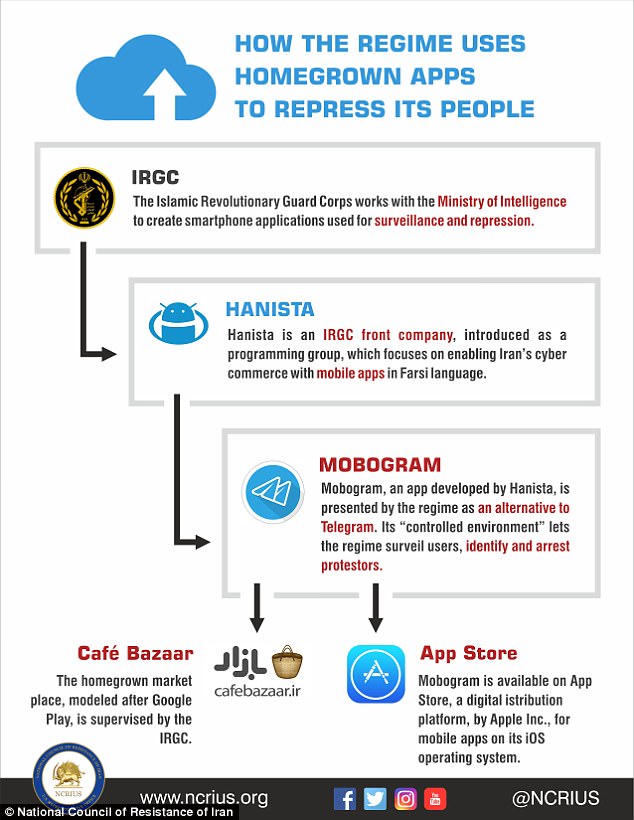 According to the NCRI, the Iranian regime has developed a Google Play Store-like application marketplace called Café Bazaar to develop apps that can spy on users who download them

Durov has also said  that Iranian government wanted him to help them use Telegram to spy on users, a request he refused to comply with, Gizmodo noted.

Family members who live outside Iran will often use Mobogram and other Telegram spinoffs as a way to communicate with relatives who still live there.

The NCRI claims those users are likely victims of a mass surveillance project by the Iranian military, wherein state officials are using ‘malicious codes embedded in IRGC mobile apps to actively monitor and disrupt the communications of protesters and dissidents.’

WHAT APPS COULD BE VULNERABLE TO IRANIAN SURVEILLANCE?

The National Council of Resistance of Iran claims that the Islamic Revolutionary Guard Corps (IRGC) has created spyware-enabled apps for ‘cyber-surveillance and repression’.

Many of these apps are available on Apple’s App Store and the Google Play Store, as well as sites like GitHub.

Internet users have started using some third-party apps as applications like Telegram and Instagram were temporarily banned .

Friends and family members who live outside Iran are also using the apps to communicate with relatives who still live inside the country.

‘The Iranian regime is currently hard at work to test the success of these apps on the people of Iran first,’ said Alireza Jafarzadeh, the deputy director of the NCRI’s Washington office.

But it’s likely that these apps have been used by people outside Iran, which increases the risk that their activity and personal data is being monitored by the Iranian government.

‘With the recent uprising, the Iranian regime is now complementing its network surveillance with stateful endpoint (mobile device) monitoring of content, context and contacts to counter the expansion of the uprising and to avert more protests,’ the NCRI explained.

What’s more the NCRI claims that Mobogram is being distributed by a ‘homegrown market place,’ called Café Bazaar, that’s supervised by the IRGC.

Café Bazaar is modeled after the Google Play Store and features tens of thousands of apps, according to the company’s website.

‘It is the IRGC’s platform of choice to promote and distribute spyware enabled apps,’ the NCRI claims. 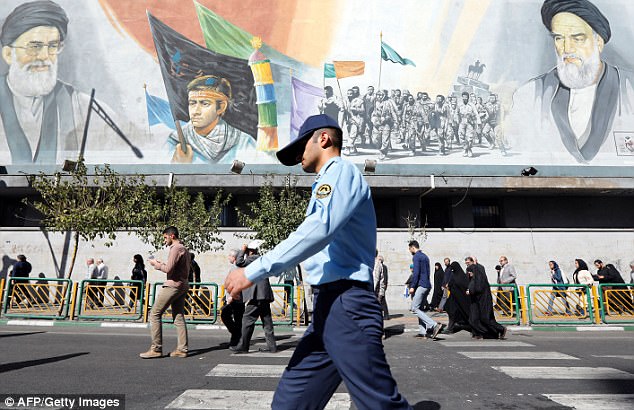 Telegram and Instagram were being used by anti-government organizers in 2017 to communicate and spread important information. The Iranian regime temporarily blocked them

Jafarzadeh says the Iranian regime can use the compromised apps to discover users’ phone number, address and other sensitive information because they have access to information on users’ SIM card.

The Iranian regime has used the spyware to ‘threaten, arrest, torture and kill people,’ he told the Sun.

In total, the NCRI believes the regime has developed about 100 apps that are embedded with the malicious spyware, including Mobogram, Hotgram, Wispi and other Telegram variations.

Along with Telegram, the Iranian regime also blocked Instagram during the uprising late last year.

The anti-government protests erupted due to citizens’ outrage around the government’s repressive policies, as well as anxieties tied to the country’s economic downturn.