By Alice Cachia For Mailonline and Afp

Iranian health officials have raised fears of a ‘fresh outbreak’ of coronavirus cases after lockdown measures were eased.

The country has paid the deadliest price in the Middle East from the pandemic, and another 76 fatalities have now been declared – taking Iran’s official death toll to 6,650.

Since April 11 Iran has allowed a phased re-opening for businesses that were closed as part of measures to curb rising Covid-19 cases – a move which health official Alireza Zali has blasted as ‘hasty’.

Tehran’s largest shopping mall Iranmall was converted into a hospital (above) to help treat coronavirus patients. Heath experts warn a new wave of infections as the country eases lockdown measures 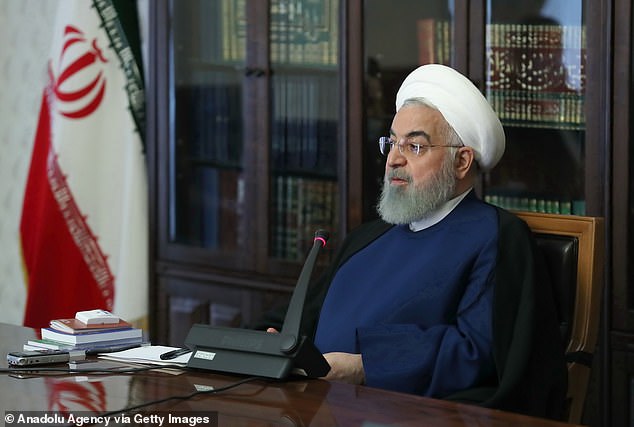 Iranian President Hassan Rouhani is pictures above attending a National Committee on Combating Coronavirus (COVID-19) meeting in Tehran on April 25. He has warned that the country needs to prepare for a ‘worst-case’ scenario of restrictions lasting until March 2021

Mr Zali, the anti-coronavirius co-ordinator for the capital, added that the re-openings could ‘create new waves of sickness in Tehran and complicate efforts to bring the epidemic under control’, the official news agency IRNA reported.

The ministry’s infectious diseases department head, Mohammad Mehdi Gouya, warned of ‘signs of a fresh outbreak’ in provinces such as Gilan and Mazandaran in the north and Qom in central Iran ‘where we made great efforts to control the epidemic’. 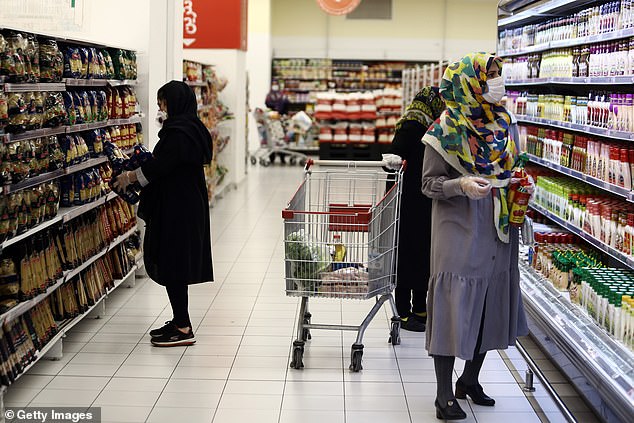 Health ministry spokesman Kianoush Jahanpour said Iran has now recorded 89,328 cases of the killer bug since its first case in February – including 1,134 over the past 24 hours.

The number of Iranian casualties is widely thought to be much higher, however.

The Iranian President Hassan Rouhani warned today that the country needs to prepare for a ‘worst-case’ scenario of restrictions lasting until March 2021. 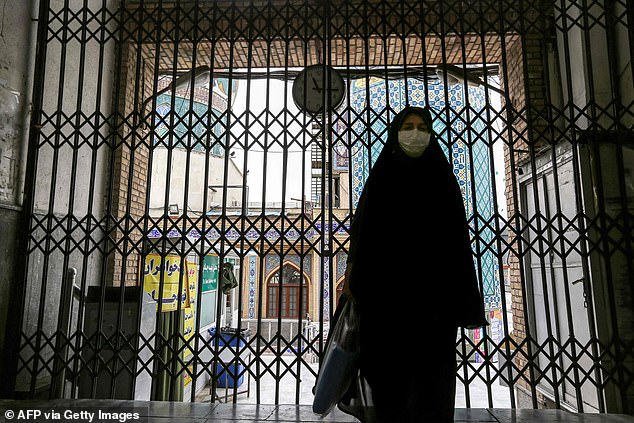 A woman walks past the closed gate outside the Imamzadeh Saleh in the Iranian capital Tehran’s Shemiran district on April 25 during the Muslim holy month of Ramadan, as all mosques and places of worship are closed due to coronavirus pandemic

Iran, already weakened by tough US sanctions, has struggled to contain the virus outbreak since reporting its first deaths were recorded on February 19, which were two fatalities in the Shiite holy city of Qom.

As well as as phased re-opening of businesses the government also lifted a ban on inter-city travel.

The possibly new wave of infections comes as the predominantly Shiite country marked the start of the Islamic holy month of Ramadan, with all mosques and places of worships remaining closed.

Current measures call for Iranians to maintain social-distancing, wear masks in public and wash their hands regularly – though are only advisory and there are no penalties for non-compliance.